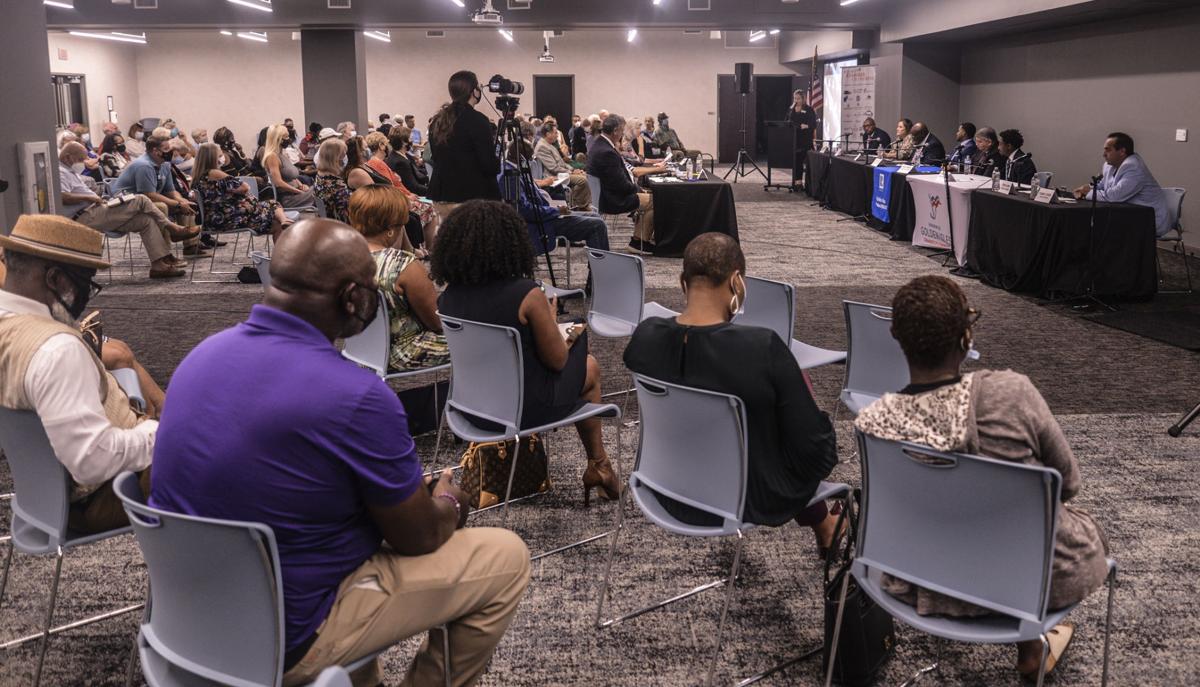 The crowd listens as seven of the mayoral candidates answer questions. 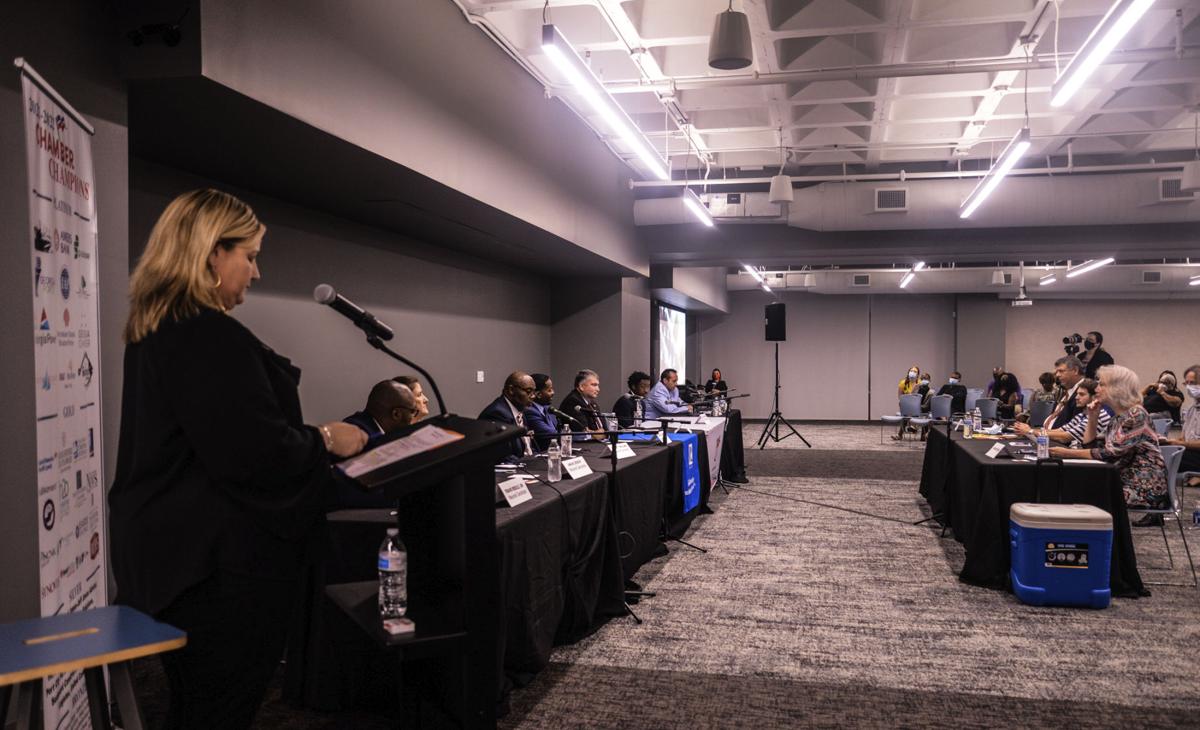 Missy Neu, left, emceed the mayoral debate as candidates each answered the same questions on development, handling private property conflicts and other issues. 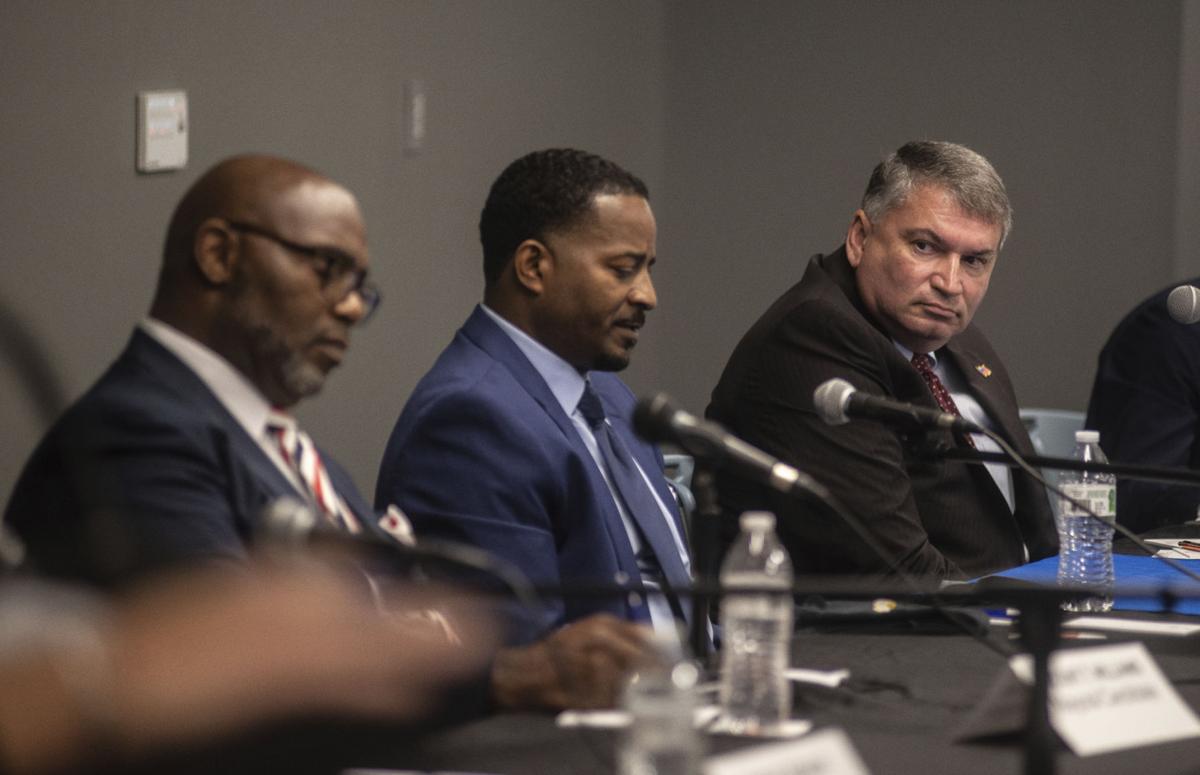 The crowd listens as seven of the mayoral candidates answer questions.

Missy Neu, left, emceed the mayoral debate as candidates each answered the same questions on development, handling private property conflicts and other issues.

Seven candidates running for Brunswick mayor had different visions for how they would lead the city into the future, but they also agreed on several key issues at Tuesday’s candidate forum.

Williams said it’s important to get a SPLOST referendum approved next year because of all the city’s needs the tax can address.

Homelessness has been a problem in the city, but The Well is in the wrong location, he said. Moving it to a location near Interstate 95 is the best solution. Williams said the homeless have managed to find The Well and they will be able to find the shelter if it is relocated.

Riddle said he voted against the failed SPLOST referendum earlier this year, but he will be a strong advocate for the 1 percent tax the next time it comes before the voters. SPLOST money will be used to address the many flooding problems in city neighborhoods.

A program is needed to help the city’s homeless, but like other candidates, Riddle said The Well should be moved from the downtown area.

• John Perry said the city needs to take back control of the recreation program to increase participation by local youths. Recreation programs also offer tutoring and other learning opportunities for city youths.

A SPLOST is needed to address some of the city’s infrastructure needs, which can be costly. And The Well is in the wrong location, he said.

The city needs visionary leadership, and Perry said he was the person to be an advocate for the city and unite the community.

• Ivan Figueroa said taxpayers should decide if the city takes over recreation programs.

The issue with The Well makes it a difficult question to answer because the city and county don’t have the resources to deal with the homeless problem. But he said it would be a high priority with him.

A SPLOST is necessary to help the city address a number of road improvements and to address flooding issues in neighborhoods.

• Ann Senior said The Well is a good program, but it’s in the wrong location in downtown Brunswick. She said the county isn’t offering good programs for city youth, which is why the city needs to manage the recreation programs again.

The city and county should unite to repair city roads. The city needs to provide more help to small business through marketing, which would also spur more pedestrian traffic downtown.

• Robbie Tucker expressed empathy for the city’s homeless but agreed The Well is in the wrong location. The problem is there is no place in city limits were a homeless day shelter won’t generate complaints.

The city needs a SPLOST to help address infrastructure problems, but a timeline needs to be given to persuade voters to support the tax.

• Cosby Johnson said he wants the city to manage recreation programs because the county raised the fees.

The Well is in the wrong location because it doesn’t have room to grow and expand its program. The solution is to find a new location that will enable The Well to grow to its maximum potential.

He said he supports a SPLOST, but the upcoming LOST negotiations next year are just as important. Negotiations will determine the city’s share of the sales tax for the next 10 years.

Four candidates for the North Ward City Commission seat — Kendra Leola Rolle, Gary B. Cook Sr., Earnest Culbreath and Neal Foster — were given the opportunity to introduce themselves to the audience, but they did not participate in the question/answer session with the mayoral candidates.

The municipal election is Nov. 2. Last day to register to vote is Oct. 4.