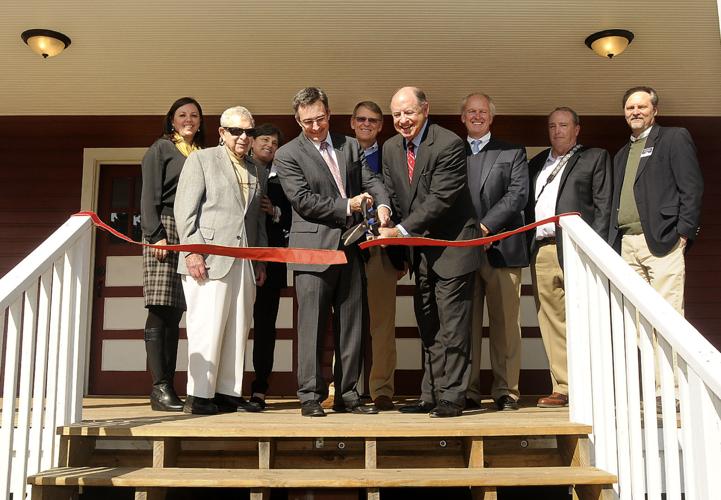 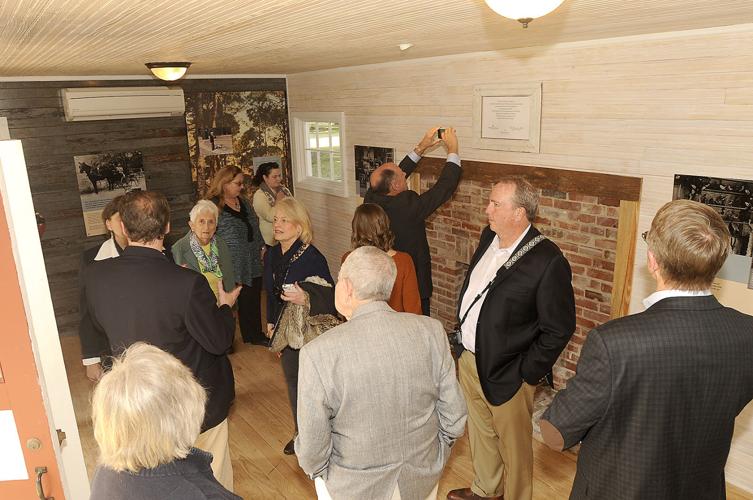 Attendees of the ribbon cutting ceremony Thursday of the Jekyll Island Skeet House get a look inside of the facility, located in the Jekyll Historic District.

The building includes information on the history of sporting and shooting on the island, and can be used as a classroom as well.

Attendees of the ribbon cutting ceremony Thursday of the Jekyll Island Skeet House get a look inside of the facility, located in the Jekyll Historic District.

The building includes information on the history of sporting and shooting on the island, and can be used as a classroom as well.

The Jekyll Island Authority made and preserved history Thursday at the ribbon cutting of the Skeet House, a place where members of the Jekyll Island Club once socialized during skeet and trap shooting competitions.

The moving of a building was a first for the authority. John Hunter, director of historic resources for Jekyll Island, said the building was originally constructed in 1930 and was in use until the mid-1970s.

“We moved it to preserve it and put it to use,” Hunter said.

The building was the only Jekyll Island Club-constructed building outside the historic district to survive the passing of time.

Hunter said skeet and trap shooting became all the rage around 1910.

“This building was part of the second skeet range built for the Jekyll Island Club,” he said.

As with any renovation project, there were some surprises along the way — in this case, the presence of powderpost beetles within the original structure. Hunter said approximately 50 percent of the original building was salvageable. Some of the original elements are the doors, and the rebuilt chimney that was constructed from the original brick.

Dion Davis, executive director of the Jekyll Island Foundation, said the building will be used for exhibit and educational space, and will accommodate 25 to 50 people. A historic exhibit, detailing the hunting and sport shooting history of the Jekyll Island, is also one of the features of the Skeet House.

Davis said a three-year fundraising campaign to restore the building had the participation of many donors, including guests of the Jekyll Island Club Hotel, Beachview Club Hotel, the former Oceanside Inn and Suites and the friends and supporters of Monsignor R. Donald Kiernan, an Atlanta priest who has been visiting Jekyll Island for nearly 60 years.

Buff Leavy, chair of the board of the Jekyll Island Foundation, said the renovation of the Skeet House was a great project for the foundation.

“It fits so well with our mission of the preservation, conservation and education of Jekyll Island,” he said. “We were able to take a piece of history that would have potentially been lost and bring it back to life. None of this could have been done without all of the donor help.

“It’s really exciting to watch the revitalization that is taking place right now.”

Reporter Mary Starr writes about education, St. Simons and Sea islands and other local topics. Contact her at mstarr@thebrunswicknews.com, on Facebook or at 265-8320 ext. 324.

Glynn Academy honored its 2022 graduates Thursday night at Glynn County Stadium. The students entered the stadium two at a time, with the graduates having to hold on to their caps due to the blustery conditions.

Lisa Marie McDaniel and the Pint Pirates at Brunswick High School had plenty of reason to celebrate at the end of the school year.

As officer Joe Owens stepped out of the building Thursday afternoon, Deandre Smith met him at the door with a handshake, a hug and a gift card.

Brunswick High honored the Class of 2022 on Wednesday night at Glynn County Stadium. Family and friends of the graduates packed the stands on both sides of the stadium while the graduates sat in rows and rows of chairs on the field.

It was to have been a one-time thing. Janie and Fred Alexander stood in their driveway on Lanier Boulevard early one morning late last summer and waved at a passing white Suburban.