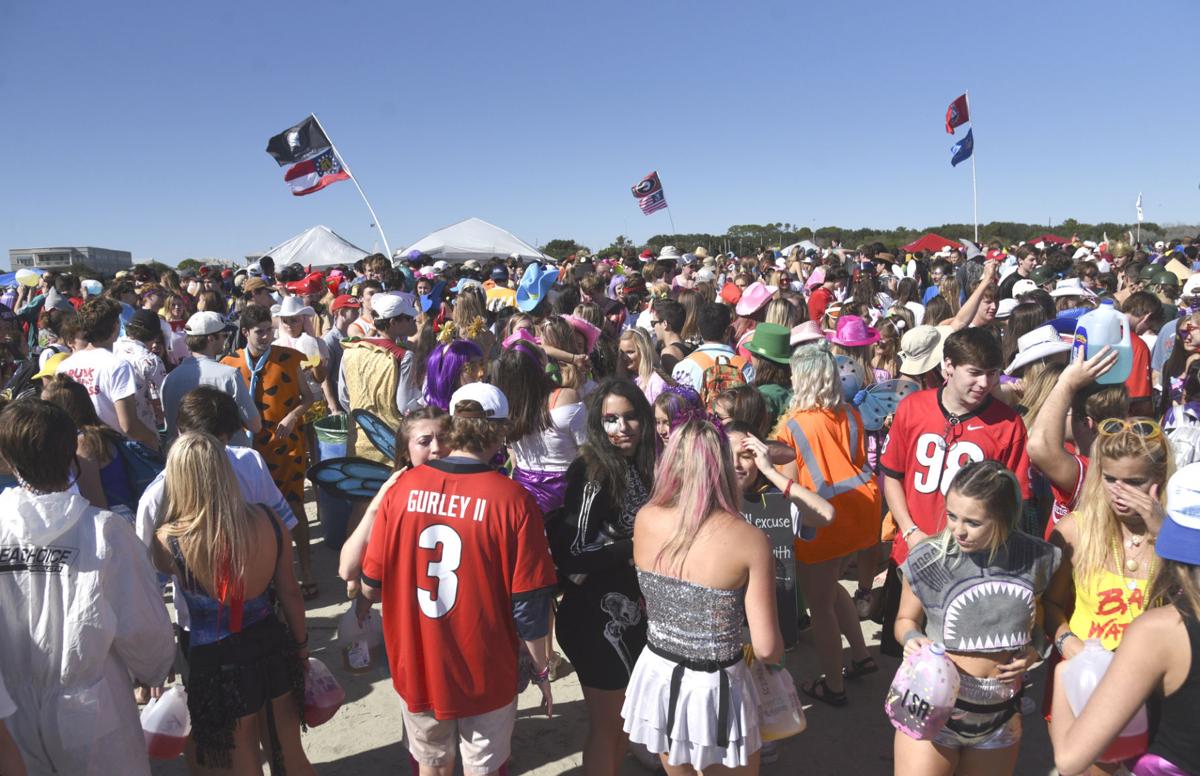 Hundreds of revelers made their way onto Coast Guard Station beach Friday for the traditional frat beach celebration. 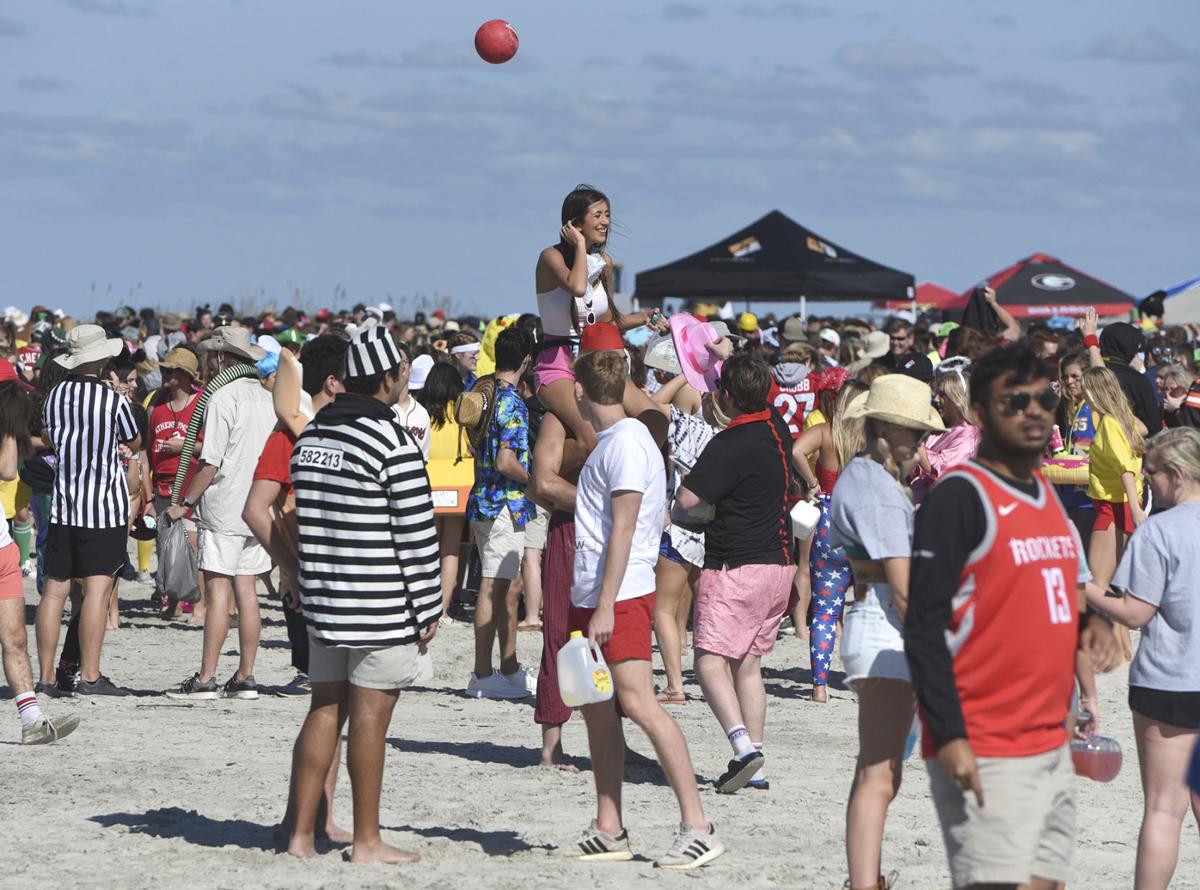 Owners say an alcohol ban on Frat Beach during Georgia-Florida weekend will have an affect on their businesses.

Hundreds of revelers made their way onto Coast Guard Station beach Friday for the traditional frat beach celebration.

Owners say an alcohol ban on Frat Beach during Georgia-Florida weekend will have an affect on their businesses.

What was not in dispute is the ban is likely to impact the income of local businesses.

The ban will only go into effect on Nov. 6 and 7 and apply to the beach on St. Simons Island exclusively.

In the worst case, Heather Hardman said her restaurant, Beachcomber BBQ & Grill, might expect to lose about a third of the normal business the weekend of the annual rival football game between the University of Georgia and the University of Florida.

While traditionally played in Jacksonville, the weekend of the football game between the Georgia Bulldogs and Florida Gators typically attracts college students from around the region to the Golden Isles, specifically East Beach on St. Simons Island. The game is set for Nov. 7.

Glynn County commissioners said during their Thursday meeting, when they voted to impose the alcohol ban, that the COVID-19 outbreak also factored into the decision.

A blanket ban on alcohol might deter some of the disruptive elements, Hardman said, but she doubts it will stop the college crowd from imbibing on the beach.

How exactly the county intends to enforce the ban is a good question, county commissioners have acknowledged.

“I think the island will be a lot safer and calmer (because of the ban),” she said. “I think a lot of kids won’t come if alcohol isn’t allowed, but I’m sure they’ll find a way around it.”

Police officers could likely clear out much of the crowd by aggressively enforcing underage drinking, public intoxication and open container laws, Glynn County Police Chief Jay Wiggins told the commission Thursday night. The department usually does not to avoid tying up officers and overcrowding the county jail for relatively minor and non-violent infractions, he said.

How exactly the department will go about enforcing the ban has yet to be determined, Wiggins said, but he will be meeting with other county officials and law enforcement agencies in the coming weeks to develop a plan of action.

For The Still, Georgia-Florida weekend is usually the busiest of the year, said Kristine Zeh, the Ocean Boulevard package store’s owner. She understands the desire to minimize the chance of COVID-19 spreading among the attendees.

Gov. Brian Kemp gave local governments the power to stop gatherings of 50 people or more unless all members maintain a six-foot distance from others for good reason, but Zeh didn’t see how that would be any easier to enforce in this scenario without arresting people.

“I have my own personal take,” Zeh said. “That’s why I’m still drive-through only. I think if everyone respects the space I have no problem, but you can’t control that.”

The ban will more than likely have a serious impact on her business as well, to the point she’s already hesitating to go through what’s become for her a routine of researching and buying the drinks likely to be popular among the frat beach crowd.

“You don’t even want to do that because you don’t want to go ahead and buy it if nobody’s going to come,” Zeh said.

She said restaurants will feel the loss too.

“This is one of the weekends that the island looks forward to,” Zeh said. “It provides money and allows us to see through to the rest of the year, to the next holiday.”

While it hasn’t been great for his business, Benji Bennett’s short-term rental company, Georgia Beach Rentals, is going to see it through fine.

The reservations canceled shortly after the ban became public knowledge, he said, but his company hasn’t rented to anyone under 35 during Georgia-Florida weekend for years. To him, the college crowd wasn’t the county’s only target.

While it may be aimed at the college crowd, Bennett said the ban also applies to adults. Plenty of responsible adults like to drink on the beach, especially before a good football game.

“(The ban) has its good points and bad points,” Bennett said. “The way they’re handling it is, I think, not fair to the older people who like to be out here.”

In the wake of shelter-in-place orders and lockdowns issued by state and local governments in the hope of slowing the spread of COVID-19, Bennett said St. Simons Island has seen some of its busiest holidays in recent memory.

Alcohol bans were not imposed despite crowded beaches, he said, and likely would not have been effective then, either.

“It was the busiest Memorial Day weekend we’d had in years, and the county didn’t ban liquor on the beach,” Bennett said. “They weren’t enforcing the six-foot distance. (People) were right up against each other.”

What might be more effective is cracking down on illegal activity already taking place, he suggested.

“I’ve been saying this for years, I think if the county had enough money to patrol this right, writing tickets for underage drinking, taking people to jail, we wouldn’t have these problems,” Bennett said.

He referenced the commission’s decision to spend nearly $150,000 on pickleball courts, made the same night as the vote on the ban. Instead, that money could be spent funneling police resources on the beach.

“I was a college student once, and we drank,” Bennett said. “Can kids get a little out of hand here? Sure. But if it was patrolled right and the county funded the police enough, I don’t think you’d have any issues. I don’t think the kids are coming down here worried about getting arrested.”

The alcohol ban applies to the entire beach on St. Simons Island.