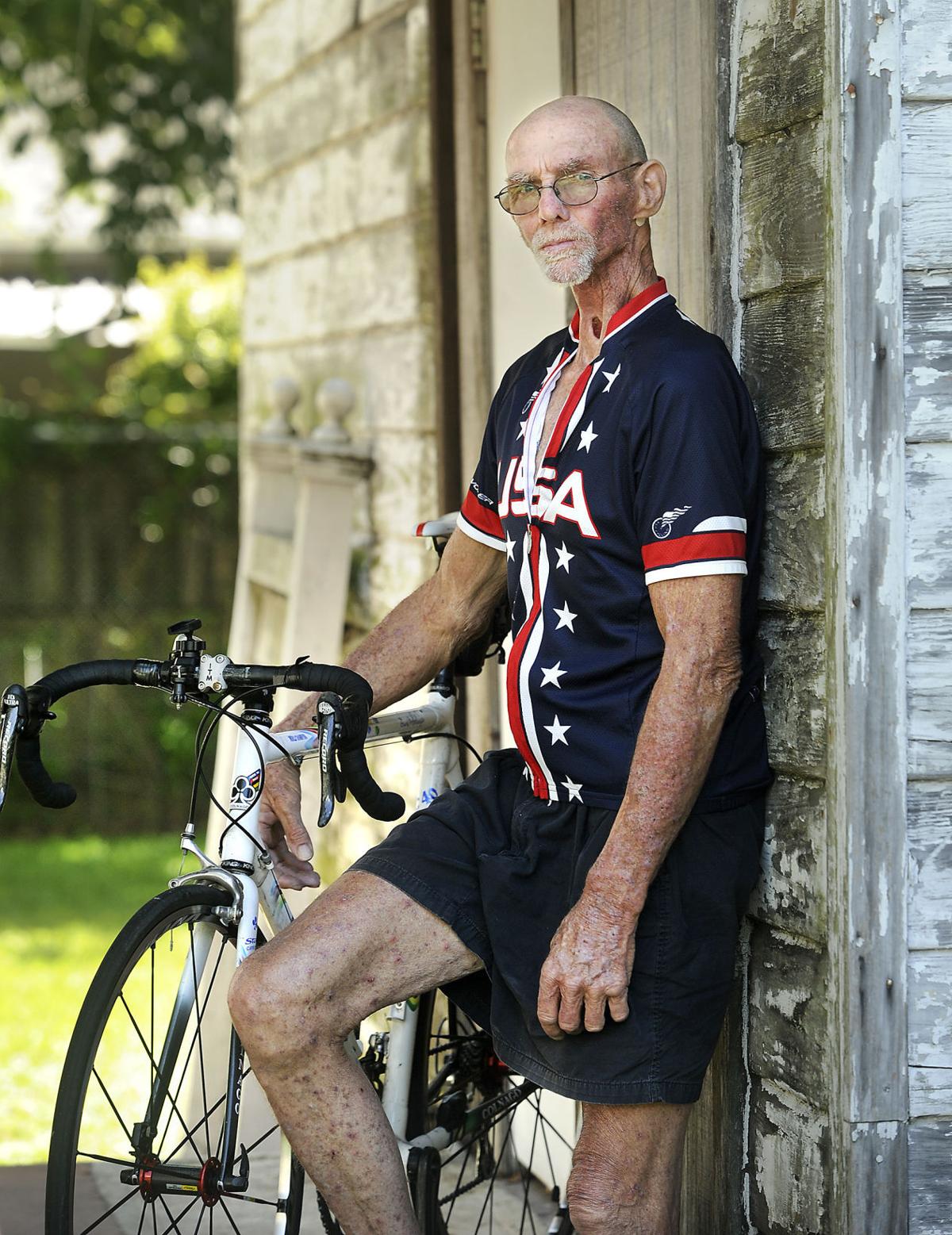 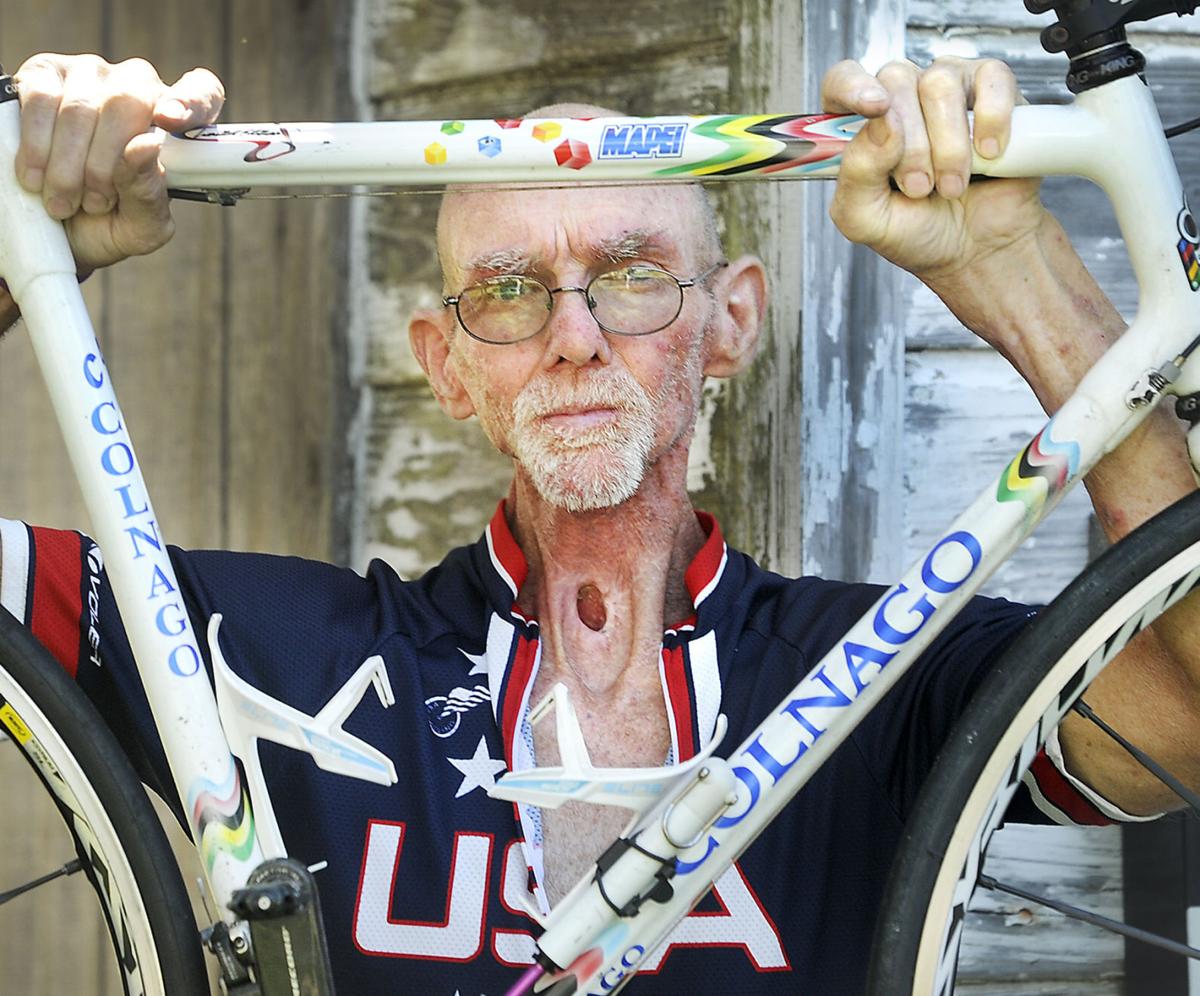 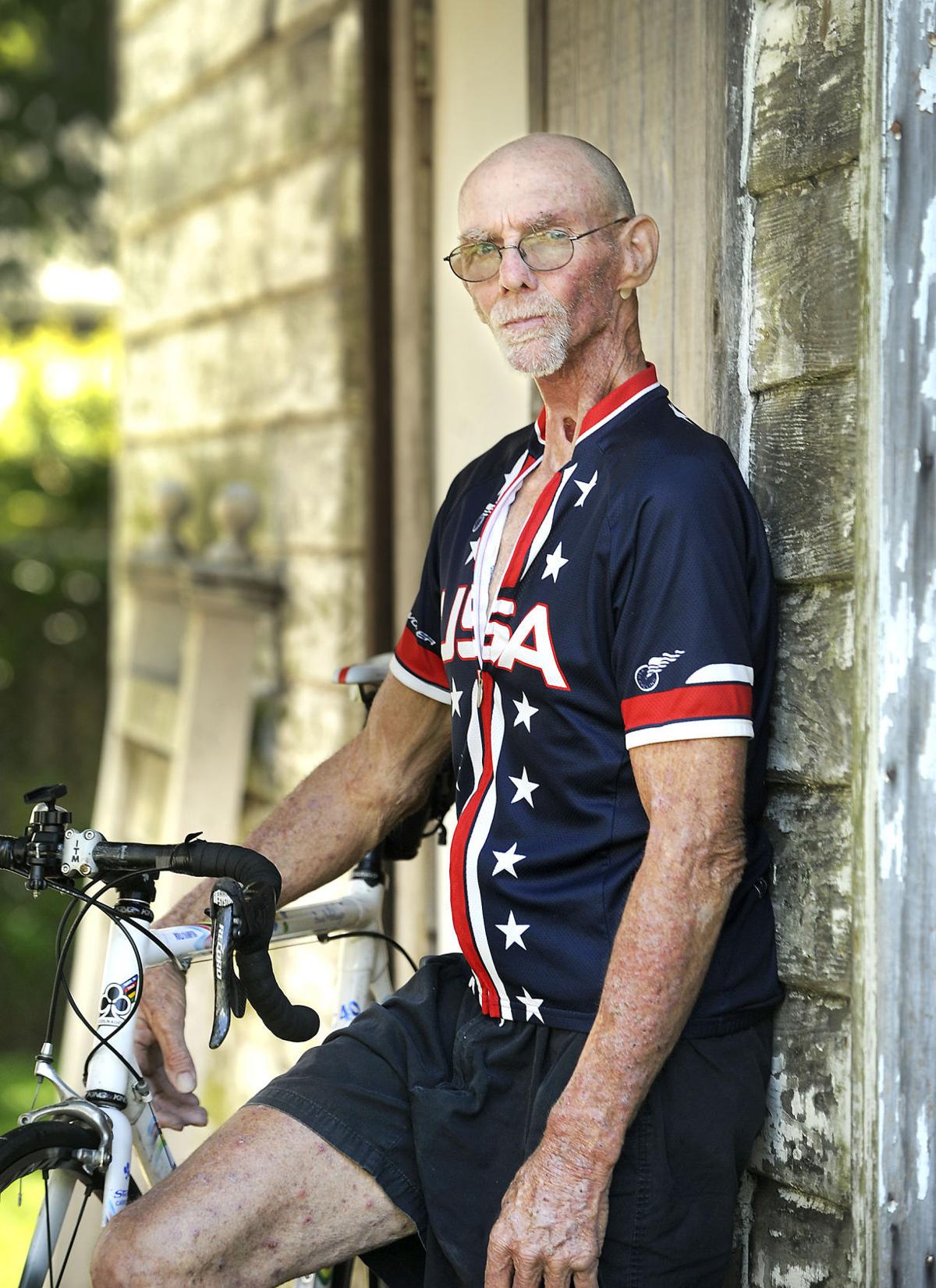 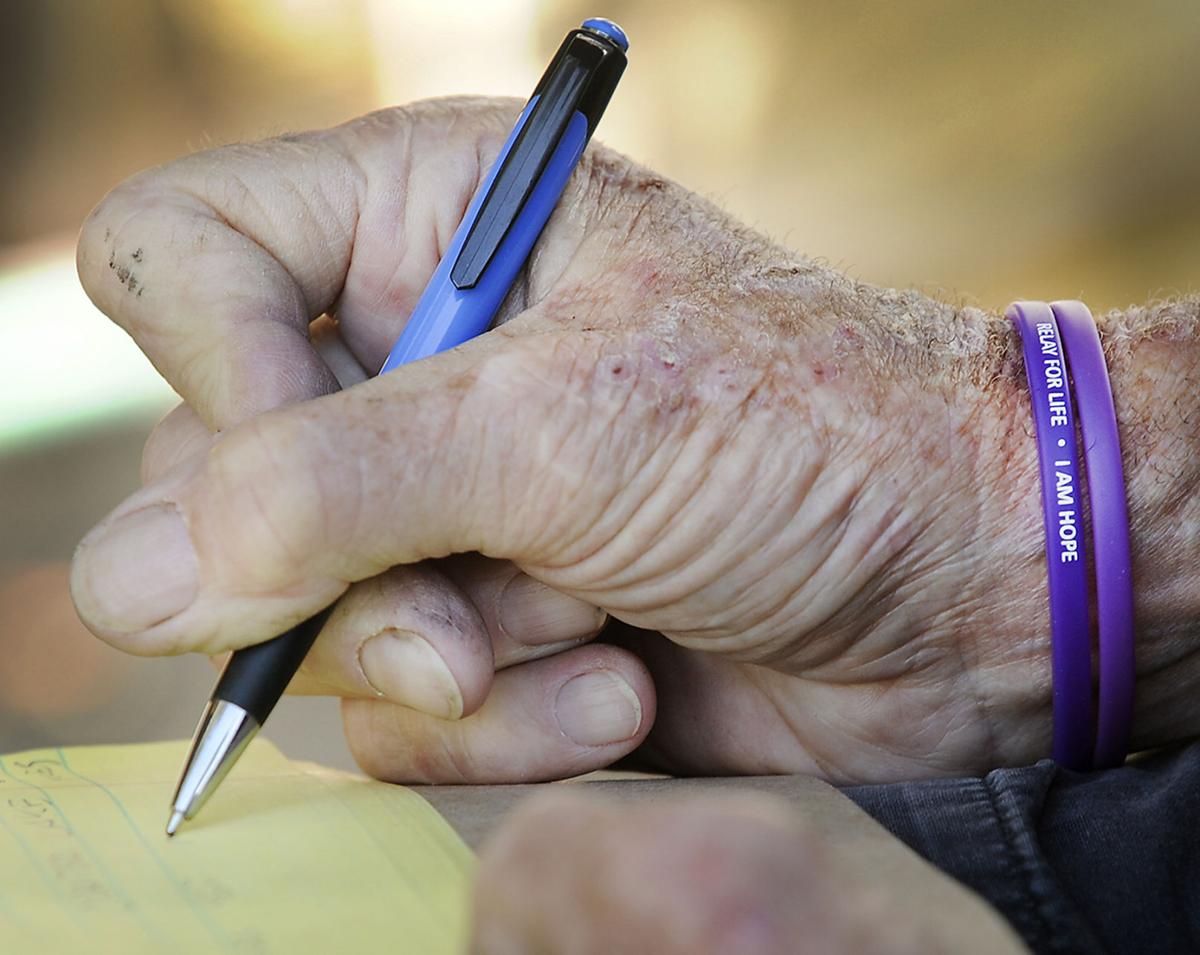 Doctors have told Fred Dufel it’s just a matter of months before he succumbs to his fifth cancer diagnosis.

“They lie. They don’t know me,” he scribbled on a yellow pad of paper in his Old Town Brunswick living room. “Cut it out. Sew it up. Get out of my way.”

With no tongue and a hole in his throat, the results of a total layrngectomy that removed the organ during his fourth cancer battle in 2013, Dufel no longer has the ability to speak. Writing on small dry erase boards or pads of paper and occasional hand motions and gestures are his only means of communication these days.

“I wanted a transplant from Barry White,” Dufel wrote with a grin. “Barry said no.”

Despite the grim prognosis, Dufel’s sense of humor is still as strong as the dogged determination that has steered him through an uncommon life of jobs and accomplishments that most people would never attempt.

Dufel will add to that list this summer when he competes in July in the cycling portion of the National Senior Games in Minneapolis. At least three times a week, between biweekly chemotherapy treatments, Dufel logs between 25 and 60 miles in the saddle, pedaling his way around the Golden Isles in preparation for the 40K road race and 5K time trial sprint he will compete in at the Senior Games.

To qualify, Dufel finished fourth in a statewide race at the Georgia Golden Olympics.

Two weeks before the national competition, he will ride in a race at Watkins Glen International racetrack in New York and a month after the Senior Games, he will ride in the 100-mile century race at Crater Lake in Oregon.

He has no plans to let the results of the sinus cancer he is fighting now be any different than before.

“Fred 5 — Cancer 0,” he wrote in big letters, pointing emphatically at the pad.

His attitude about the disease has been the same since his first diagnosis in 1991. It was throat cancer then. After a radical 12 1/2 hour surgery and 12 days in the hospital, “I put the top down and drove home,” Dufel wrote.

A little more than 15 years earlier, Dufel could be seen modeling for Bill Blass men’s line of clothing. Dufel opened a zipped-up portfolio filled with photos of himself with a full head of red hair, a beard and the stylish clothes of the time.

“They told me I was a perfect fit for their clothes,” Dufel wrote.

Prior to that, he spent six years in the Navy and at one point was aboard a Naval ship off the coast of Vietnam.

Building off his modeling career, Dufel spent eight years acting, singing and dancing in Florida’s official state play, “Cross and Sword.” Those same skills were used to play Ronald McDonald in the state of Florida for two years.

Since then, Dufel has earned his living as a mechanic, home builder and bartender, among other trades. But all the while, Dufel never stopped making the most of his life and doing whatever it took to do it.

He was Georgia’s state heavy weight champion in Karate, has competed in pistol shooting competitions and has been a line judge for countless professional tennis events.

His tennis line judge’s career included several U.S. Open tournaments. Since 2013, Dufel has been known as the first non-verbal line judge in the event’s history, using a specially made whistle that works with his stoma, the opening in his throat from his 2013 surgery.

When Dufel puts his mind to something, he lets nothing stand in his way, something that has not always endeared him to others. Always opinionated and not afraid to let it be known, Dufel admits he has a bit of a cantankerous reputation. A one-track mind can have that effect sometimes.

But Dufel also has a big heart. Always willing to help those who are willing to help themselves, he and his long-time girlfriend of 27 years raised a now 19-year-old foster child from the time she was 22-months-old.

These days, Dufel is often seen in the saddle of his bike, training for the Senior Games. It is a double-edged sword. Cancer thrives in healthy tissue, but the biking helps maintain what he can of a positive attitude.

“I have tried to stay positive this time,” Dufel wrote. “It’s a little harder (this time). Biking helps.”

Now with a bald head after donating his long, gray hair to Locks of Love, Dufel said he simply has more to do before he is willing to let the cancer he has beaten so many times triumph.

As long his heart still beats, Dufel will live life his way and advises others in his situation to do the same.

“Be selfish. Breathe all the air you can,” Dufel wrote.

After posing for a few photos with the professional competency of a former model, Dufel took advantage of already wearing his biking jersey.

Reporter Michael Hall writes about public safety, environment and other local topics. Contact him at mhall@thebrunswicknews.com, on Facebook or at 265-8320, ext. 320.

When a tragedy struck in Glynn County earlier this year, Zerik Samples began receiving texts and phone calls from students in the CAYLI program.

Glynn Visual Arts will host its 50th annual fall arts festival, Art Under the Oaks, this weekend at Postell Park on St. Simons in the Pier Village.

Local write-in candidates running for state and county office consider voter choice to be among the most important aspects of the voting process, and so cast their hats in the ring regardless of their chances of victory.

Dozens of people attended a rally in Hanover Square before marching to Old City Hall Wednesday to a town hall meeting to discuss the future of a Confederate monument in downtown Brunswick.