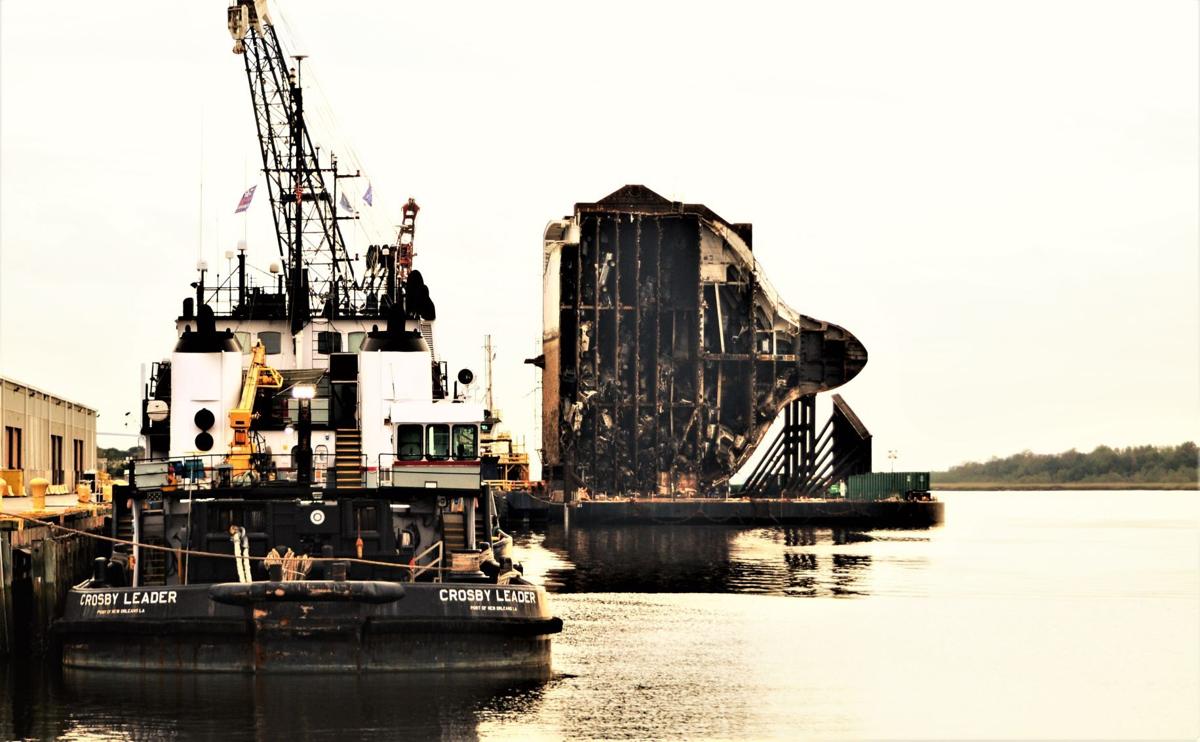 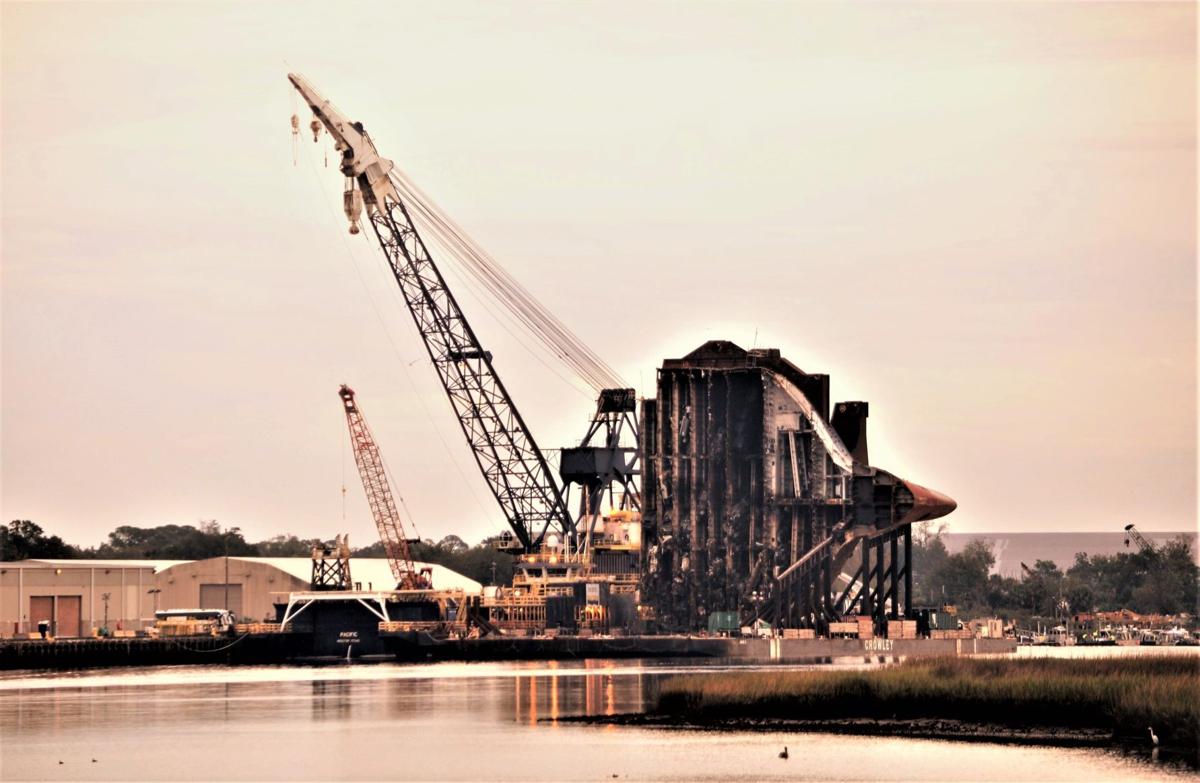 The ship’s bow comprises only about an eighth of the shipwrecked Golden Ray’s overall size.

However, perched alone Monday atop the barge Julie B at a mooring near Mary Ross Waterfront Park, the recently separated bow looked somehow more imposing than the remaining balance of the half-submerged shipwreck in the St. Simons Sound.

The VB 10,000 completed cutting the bow from the rest of the shipwreck, lifted it and lowered it onto the Julie B over the weekend.

At 104 feet long by 136 feet across by 113 feet high, the estimated 3,100 metric ton chunk of the ship’s bow created quite a stir on its journey Sunday. The Julie B chugged its cargo conspicuously up the Brunswick River, filled the broad space beneath the Sidney Lanier Bridge as it slid past, then cruised up East River into downtown Brunswick.

The Julie B and its imposing cargo are docked at the Port of Brunswick near a chainlink fence that separates Mary Ross Park from the port.

A steady stream of curious onlookers stopped by throughout the day to check out this jaw-dropping chunk of steel that towers above anything else in the vicinity.

“It’s unthinkable,” said Terry Leahey, craning her neck to take it all in. “Just amazing. It fills the horizon. I’ve been sending pictures of this to friends all over the country.”

Leahey, a reporter and half a dozen other onlookers were politely shooed off port property and back through an open gate by a port employee, who then closed the gate.

Kevin Brogan gawked at the crosscut view of the ship’s 13 decks, sprinkled with dozens of ruined cars, pickups and SUVs, perched precariously on the cutting edge like Matchbox cars belonging to a giant kid who does not take care of his toys.

This first cut was completed in three weeks, accomplished by a gargantuan anchor chain powered by the shear tension created by the VB 10,000’s winches and pulleys churning it from the bottom up. Each link in the chain is 18 inches long and weighs 80 pounds.

Brogan looked beyond the display of wreckage in the dissected bow, however.

“What impresses me is the symmetry of the cut,” he said. “You would think with that big chain doing the cutting it would be jagged and mangled. But look at it. It looks really smooth. Like cutting a piece of cake.”

“There’s relief and there’s a sense of pride that they had the separation and the lift and the transit,” Himes said. “And there were no accidents, no injuries and nobody got hurt.”

But the salvors, the engineers and other key players in this operation went back to work Monday, he said.

Engineering teams are reviewing everything that went right and went wrong in the first cut to learn ways to streamline and expedite future cuts on the now 552-foot-long shipwreck. Salvors with contractor T&T Salvage are inspecting the work site on the St. Simons Sound, checking the chains and other equipment in preparation for the next cut.

The crew of the 255-foot-tall VB 10,000 will now focus cutting off the ship’s stern. Himes would not hazard to speculate on a timeline for when this next cut will begin.

Additionally, a crew is conducting underwater hydrographic surveys inside the 1-mile perimeter environmental protection barrier that surrounds the shipwreck. The survey is assessing how much large debris, particularly loose vehicles, shook free of the ship during the cutting and lifting, Himes said.

At least two vehicles were seen in the water: one detected early Saturday morning from overhead by a helicopter spotter; the other made a big splash in front of the crowd on the St. Simons Pier, plunging to the water below as the VB 10,000 held the huge bow section suspended in the air.

“It’s easy to get distracted by the first cut, but we’re now very much focused on cutting this next section,” Himes said.

Another barge, the MOVRO 2008, will take the stern section when the cutting is complete, Himes said. The Julie B will remain until the next front section of the shipwreck is cut. Then it will take both sections to a recycling facility in Gibson, La.

The four outside sections will go directly to Gibson, La. The four interior sections will go to a dry docks space on the East River, backed by Bay Street in Brunswick. There the vehicles inside will be retrieved and crushed before the ship’s sections are taken to Louisiana.

“I feel sorry for it. It was only two years old,” she said of the bow of the Golden Ray, built in 2017. “I kind of feel bad for this thing. It didn’t get to accomplish much. To think it’s just a decapitated carcass. Now the butt’s going to get chopped off.”

Next cut will tackle shipwreck's engine room in the rear

The VB 10,000 crane vessel is gearing up to take another big bite from the rear end of the shipwrecked Golden Ray in the St. Simons Sound.