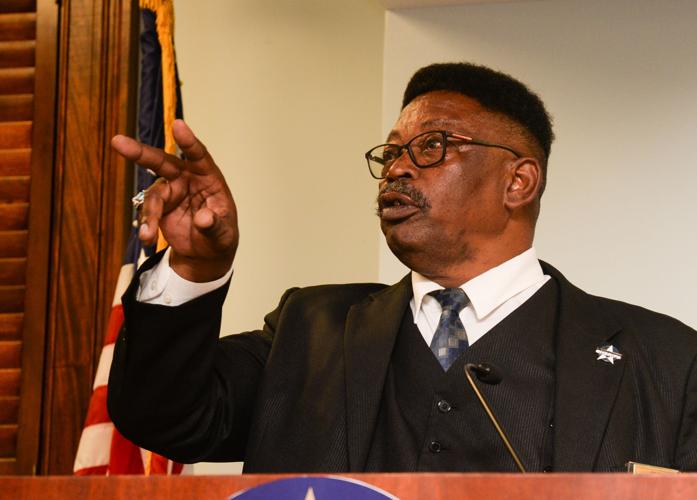 Deputy Randall Lacey points out some people who helped him mentor young people during his retirement ceremony Friday at the Glynn County Courthouse. 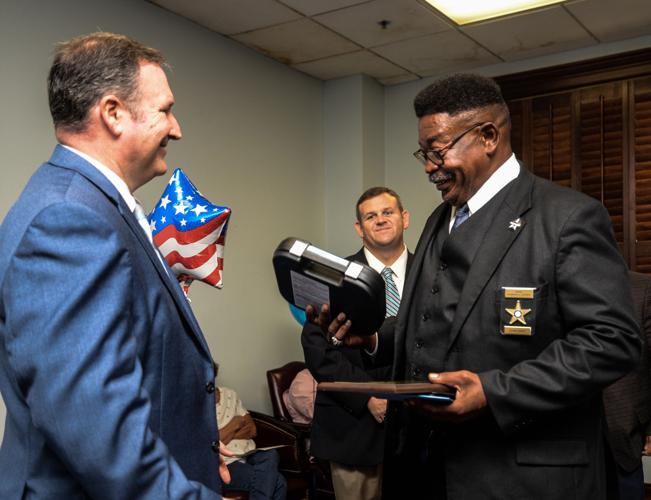 Deputy Sheriff Randall Lacey smiles as he holds the pistol case as Sheriff's Office Maj. Josh Lewis, left, presents him with his service weapon upon his retirement. Maj. Robbie Jump looks on. 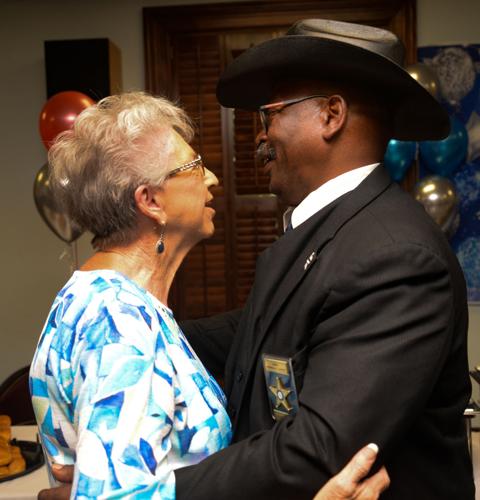 Retiring Deputy Sheriff Randall Lacey gets a hug from Martha Johnson, of his long-time friends from the St. Simons Island pier. Whenever Lacey cooked for the regulars Martha provided dessert, often a cake. 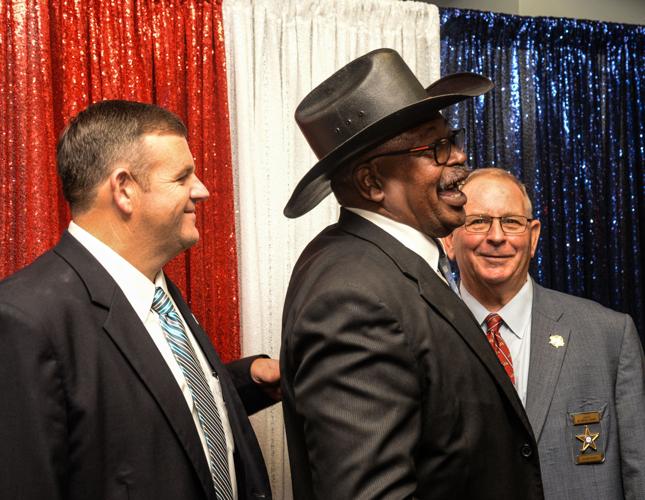 Deputy Randall Lacey points out some people who helped him mentor young people during his retirement ceremony Friday at the Glynn County Courthouse.

Deputy Sheriff Randall Lacey smiles as he holds the pistol case as Sheriff's Office Maj. Josh Lewis, left, presents him with his service weapon upon his retirement. Maj. Robbie Jump looks on.

Retiring Deputy Sheriff Randall Lacey gets a hug from Martha Johnson, of his long-time friends from the St. Simons Island pier. Whenever Lacey cooked for the regulars Martha provided dessert, often a cake.

People from judges to hunting buddies praised a longtime Glynn County law enforcement officer who is retiring at month’s end.

Randall Lacey, 65, has worked the past four years with the Glynn County Sheriff’s Office as a mentor in a school program along with continuing to enforce the law on St. Simons Island where he befriended everyone from the very young to the elderly during his earlier service as a Glynn County police officer.

Sheriff Neal Jump told the crowd that Lacey was a good friend to everyone in the room and had formed lasting relationships in his work, especially on St. Simons Island.

“It started with a kid he met on the pier or maybe squealing tires or playing loud music,’’ Jump said. “When he met the kids, he met the parents.”

He described Lacey as an old time cop who believed in educating and not immediately putting them in jail.

Lacey had been a friend for years, Jump said, and he described him as “the man, the legend, the mayor of St. Simons.”

“He used his lawful discretion when he encountered the knucklehead and the immature,’’ Scarlett said, “but he kept us safe.’’

There were cases where lives would have been lost had Lacey not used his instincts, he said.

“He’s a big cop with a big heart,’’ Scarlett said, telling him, “We appreciate everything you have accomplished. You have made a difference.”

“He sees the humanity in everyone he encounters...He cares for us. He cares for our children,’’ Douglass said. “He’s our Andy of Mayberry.”

Indeed, many in the community conferred their own honorary titles on Lacey, from the mayor to sheriff of St. Simons Island, where he spent a lot of his time.

Jump said he was highly praised for letting Lacey transfer from the Glynn County Police Department to his office to run a mentoring program for fifth graders. It wasn’t long, however, before people on St. Simons were upset at the loss of Lacey, who had kept the peace there, Jump said. That’s why when Lacey finished his work in the schools each day he was directed to drive his American flag patrol car back to the island and take up his duties at the pier.

A couple of hunting buddies, Dee Blackshear and Mickey Milton, who once supervised Lacey, told stories of their times in the woods that had Lacey laughing at his mishaps.

When Lacey responded, he unapologetically brought a collection box to the front and slid a bill into the slot. It was to support a scholarship fund named for Michelle Drew, the beloved principal at Altama Elementary School who passed away earlier this year. Lacey said earlier it was she who first encouraged him to work with youth.

He also told the crowd, “I ask you to always pay attention to the people out there.”

“You don’t want to get that phone call form somebody saying, ‘Do you know what happened?’ ’’ he said.

The Georgia Sheriff’s Association recognized him for mentoring hundreds of fifth graders in its Choosing Healthy Activities and Methods Promoting Safety program. The Sheriff’s Office gave him a plaque recognizing his years of service and presented him with his service weapon.

FBI Special Agent Jeff Roberts, an island resident, gave him an FBI cap with his name on it, the headgear that agents wear so they can recognize their friends, he said.

Lacey came to work with the Glynn County Police Department in 1995 after 20 years in the Navy.

He grew up in northern Virginia in the Washington, D.C., metro area and enlisted in the Navy in 1975. He was a calibration tech, or “instrument man,’’ but he received secondary assignments in physical security, investigations and in arms.

“I retired as a chief master at arms at Kings Bay,’’ Lacey said in an earlier interview.

At the time, Glynn County had a “pre-hiring” policy in which people in the military took some early training and had a job once they entered civilian life.

“I was coming up here before I got hired, doing ride-alongs and all that fun stuff,’’ he said.

At the police department he worked in patrol, bike patrol, worked on the DUI task force and worked drug interdiction. He also worked out a lot, and when the county police instituted a domestic violence program, the muscular Lacey looked out sternly from the “Real Men Don’t Hit” poster. As a corporal, he became, as he puts it, “Island supervisor or whatever.”

He laughed that part of his job was “baby-sitting young and old.”

Many parents brought their children around Lacey who would menacingly tell them he would be watching them as well as laugh and trade hand slaps and hugs. That friendliness provided an intelligence network of sorts. If there was some vandalism or other trouble, Lacey could usually come up with a suspect.

“If I didn’t know who it was, I would know in about two seconds,’’ he said. “That’s the thing about the island.”

He often stood in the parking lot at the pier keeping speeds down. He would interrupt his own phone conversations to yell something like, “Hey. Hey. Slow down. This ain’t the Daytona 500.”

He led the opening day parade each spring for the recreation department baseball and softball leagues, most recently in the American flag car with its siren blasting. He said that day he would retire in June.

Lacey said he has concerns about public safety given that numerous law enforcement departments are understaffed and few people are entering law enforcement.

Asked what he’ll do in retirement besides hunting, Lacey said, “I may do something later, but I’ve got no plans now. I’m just ready to get it over with.

Jump said he wants him to return part-time to continue his work in CHAMP.

Oh say, can you spa!

We all strive to look and feel our best. Diet and exercise are at the foundation for staying fit, but some areas are stubborn – like that belly pooch, the dun lap, or upper arms. Now you have the freedom to get body sculpting procedures done in an office setting! Dr. Diane Bowen, at Golden I…

A group of about 60 people gathered outside the Glynn County Courthouse on Saturday evening to protest the Supreme Court’s ruling Friday that overturned Roe v. Wade, which protected abortion rights at a federal level.