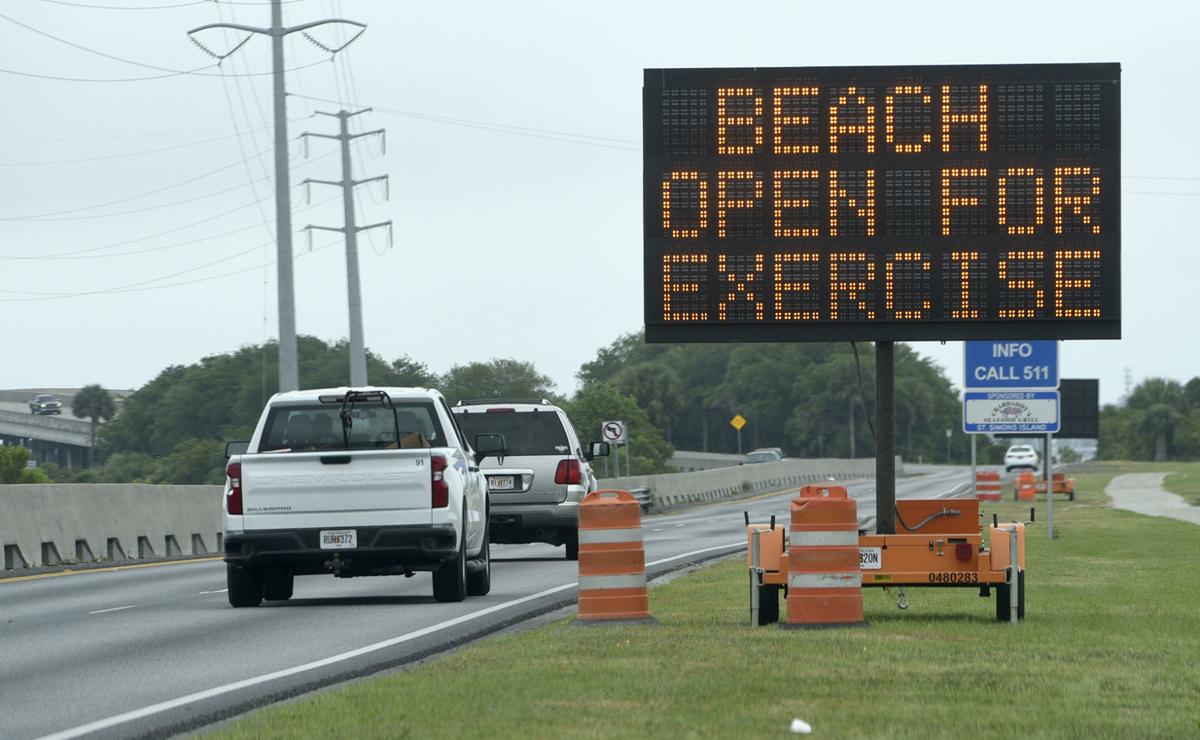 A mobile sign on the FJ Torras Causeway alerts motorists that St. Simons beaches are open for exercise only. 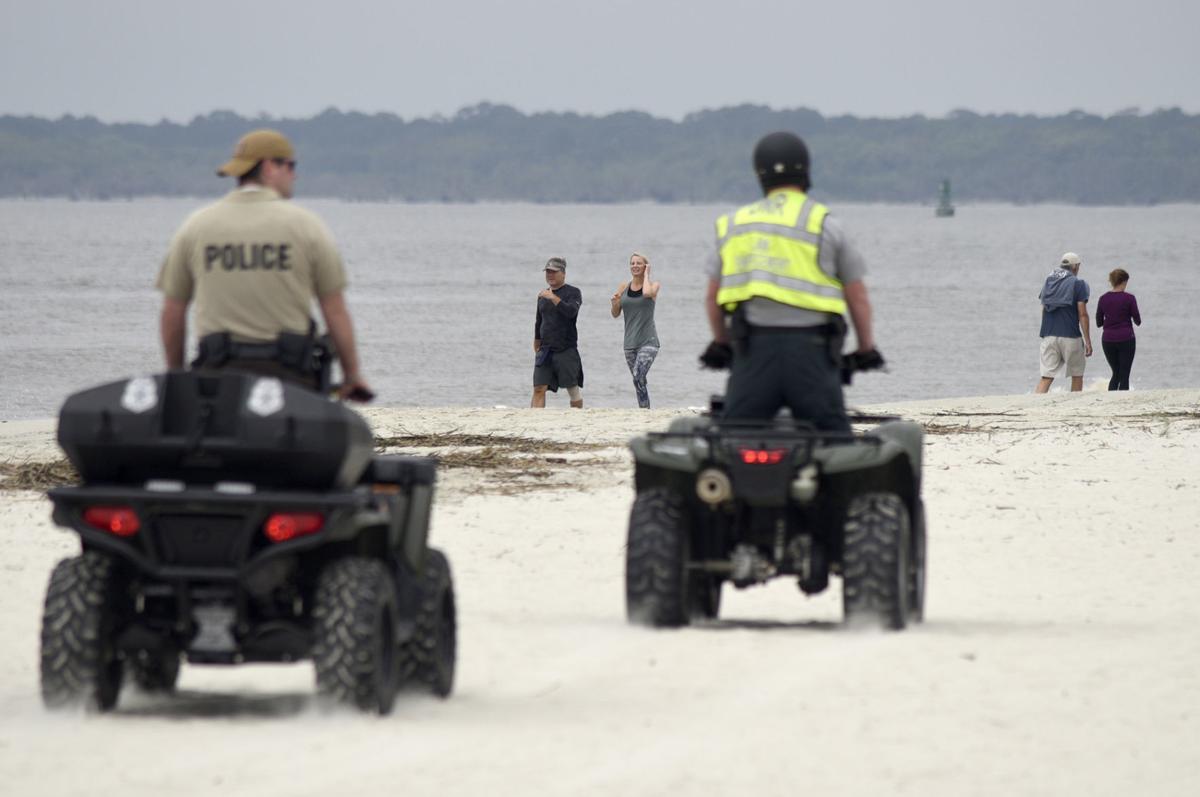 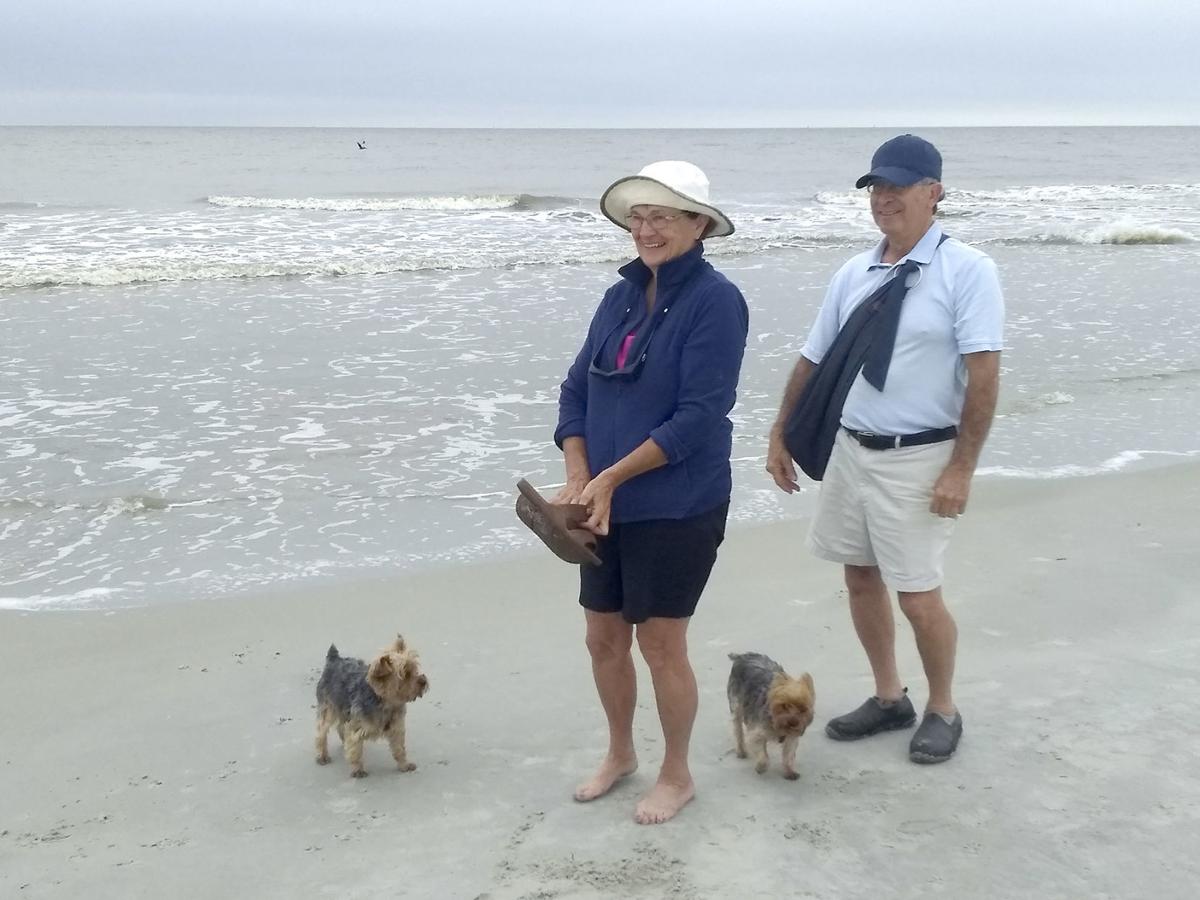 Although Diane and Bernard Villemaire side with county commissioners on the beach issue, Yorkie pups Molly and Milo really wanted a day on the beach. 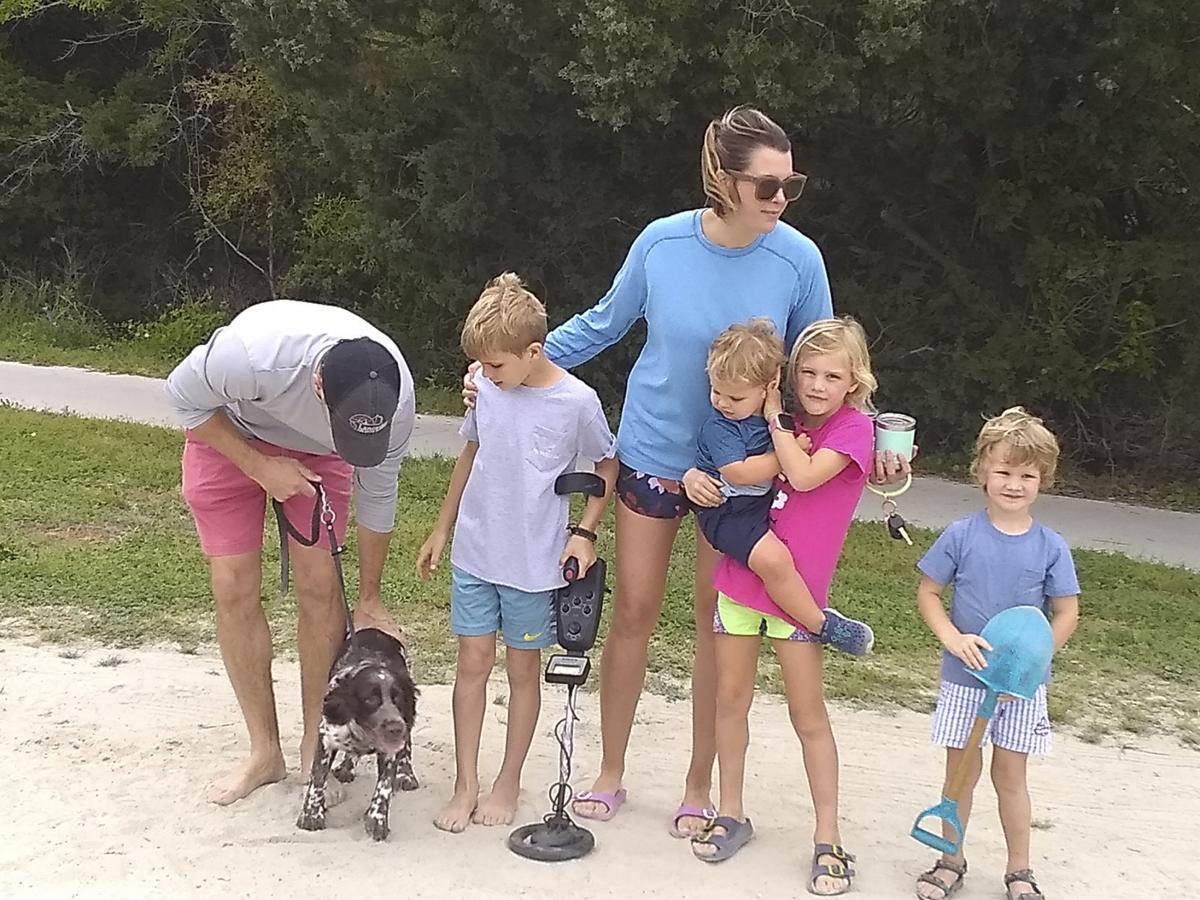 There was room Wednesday for social distancing at Coast Guard Beach even for the extended Fassnacht family — Nicholas and Ashley, children Reed, Elliott, Lilly and Wilder, and Mercy the dog.

A mobile sign on the FJ Torras Causeway alerts motorists that St. Simons beaches are open for exercise only.

Although Diane and Bernard Villemaire side with county commissioners on the beach issue, Yorkie pups Molly and Milo really wanted a day on the beach.

There was room Wednesday for social distancing at Coast Guard Beach even for the extended Fassnacht family — Nicholas and Ashley, children Reed, Elliott, Lilly and Wilder, and Mercy the dog.

Gray and purple skies stretched to the ocean’s horizon with strong implications of rain at midmorning Wednesday, but the Fassnacht Family called those storm clouds’ bluff and hit the beach anyway.

There was plenty of room for social distancing at Coast Guard Beach on St. Simons Island, even for this crew — Ashley, husband Jonathan, Reed, 8, Lilly, 6, Wilder, 4, 2-year-old Elliott and the family dog, Mercy. This was the St. Simons Island family’s first beach trip of spring, due mainly to the coronavirus pandemic and the state order to shelter in place. In a newly acquired instinct, a reporter stepped back farther beyond the 6-foot boundary that is recommended for safe social distancing.)

“We have just missed being on the beach and this is our first time back. It’s nice to have a change of scenery, and we’re getting some exercise.”

Exercise. That is the standing requirement under Gov. Brian Kemp’s order last Friday that opened Georgia’s beaches on the same day his office released guidelines for a statewide mandate to shelter in place. Kemp’s order reopening local beaches superseded an earlier Glynn County Commission order that closed the beaches.

County Commission Chairman Michael Browning fired off a letter to the governor’s office Monday, saying Kemp’s opening of the beaches poked holes in local efforts to contain the virus, which stood Wednesday at 30 cases in Glynn County. The governor told The News on Tuesday that opening the beaches for exercise purposes does not comprises coronavirus containment efforts.

A host of state Department of Natural Resources law enforcement officers were on hand Wednesday to ensure that no one was at Coast Guard Beach for rest or relaxation. Anyone trying to get on the beach with coolers, umbrellas, beach chairs or a good read would be turned back.

That was OK with Diane and Bernard Villemaire. All things being equal, the Glynn County couple side with chairman Browning on the beach brouhaha. But their sibling yorkie pups, Molly and brother Milo, overruled them both.

“These dogs are what brought us,” said Diane Villemaire as gentle incoming tides lapped at the puppies’ paws. “They love the beach, and they love the water. I love the beach and I love that I can come out here, but I think Gov. Kemp made a mistake in overriding the commissioners. I feel like the county commission was trying to do the right thing by us.”

Bernard Villemaire agreed. But looking around the shoreline, he figured it was safer to walk here than in their Laurel Grove neighborhood.

“I’m ambivalent,” he said. “On the one hand, on a day like today, it’s easier to walk on the beach than in our neighborhood.”

“But are we afraid?” Diane asked, looking to her husband.

“Not right now,” he said. “There are no people here, and there’s plenty of room.”

True enough. Even for a cloudy day, Wednesday was nothing like a typical spring day on Coast Guard Beach. No spring breakers in party mode, no snowbirds in reclining mode, no beach bums in idle mode. There was just a scattering of beachgoers, all of them objects in motion: walkers, walkers with dogs, joggers, joggers with dogs and families on the move.

Longtime islander Roland Daniel thought he had stepped back in time Wednesday.

“It reminds me of being on the beach back in the (19)80s,” said Daniel, a local realtor who was walking with wife Paige Daniel. “There’s hardly anyone here. It’s great.”

For the record, Daniel said he was against Kemp’s order to reopen the beaches after county commissioners had voted to close them. But Daniel said everyone appears to be keeping their distance, and DNR officers are preventing idle gatherings.

The governor’s order also allowed short-stay rentals to continue on the island, but Kemp reversed that decision in extending his executive order through April 30. Short term rentals are now banned until then.

When they were allowed, Daniel said he encouraged friends in metropolitan Atlanta to please stay put until health officials give the all-clear.

“As long as it’s this sparsely populated, we should be fine,” he said.

As the Fassnacht children scampered beachward, their parents felt confident this would be a safe, active diversion for the whole family.

“It’s not like we’re here to have a party,” Jonathan Fassnacht said.

“It’s a big beach,” added Ashley Fassnacht. “I feel like people are monitoring their distance and being respectful of others’ space. I think it’s OK. We’ve missed being at the beach.”