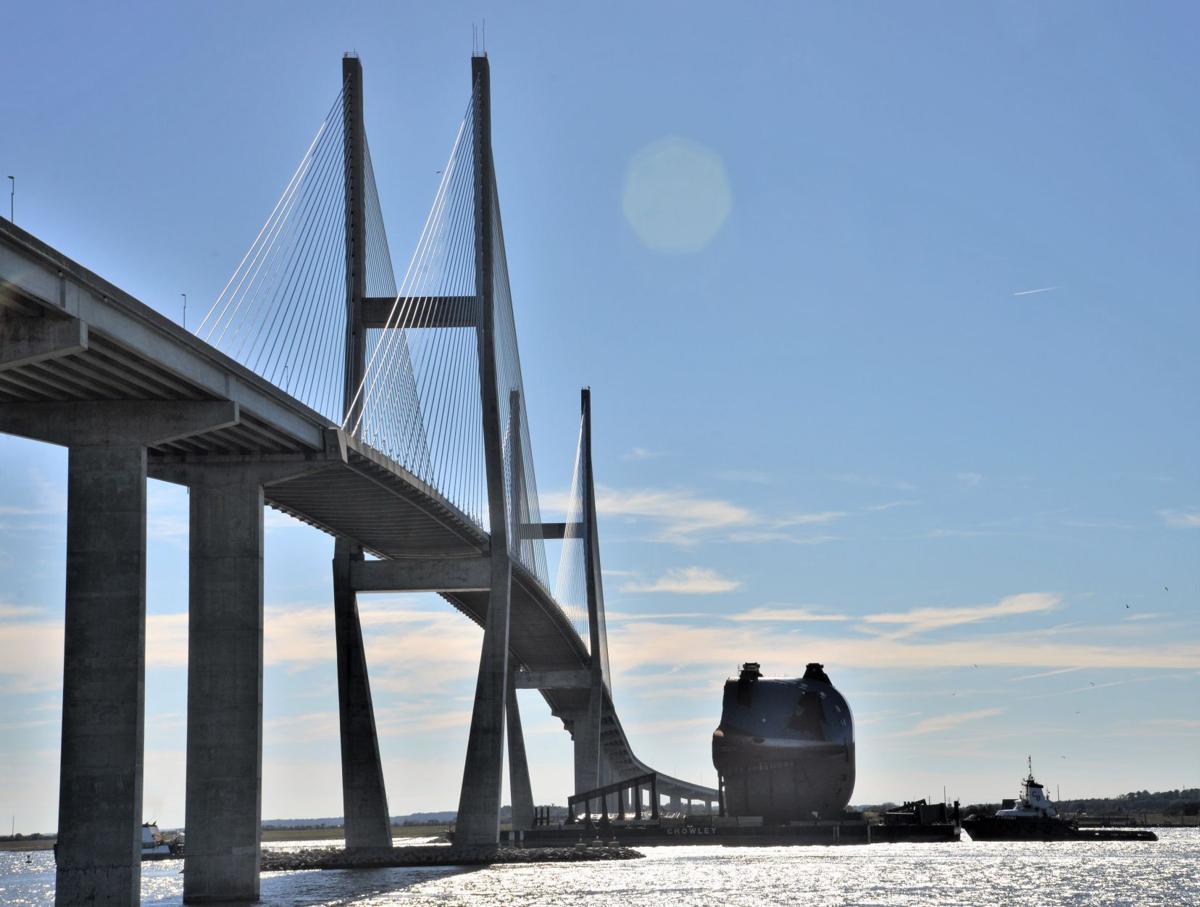 The bow of the Golden Ray, above, passes under the Sidney Lanier Bridge on Tuesday as the Julie B heads out to sea. Below, a crowd gathers to watch the departing bow pass by the St. Simons Pier. 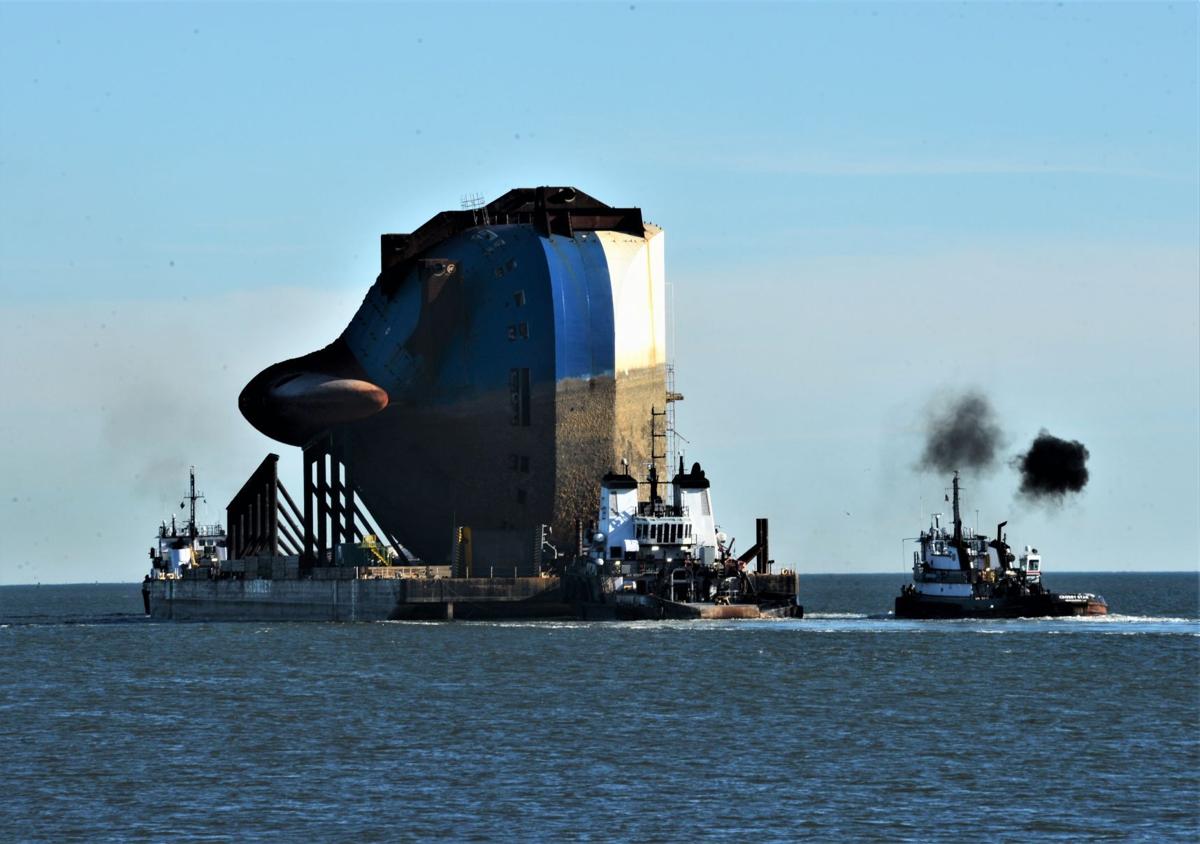 Smoke puffs from the stacks of a tug as it pushes the Golden Ray's bow through the shipping channel off St. Simons. 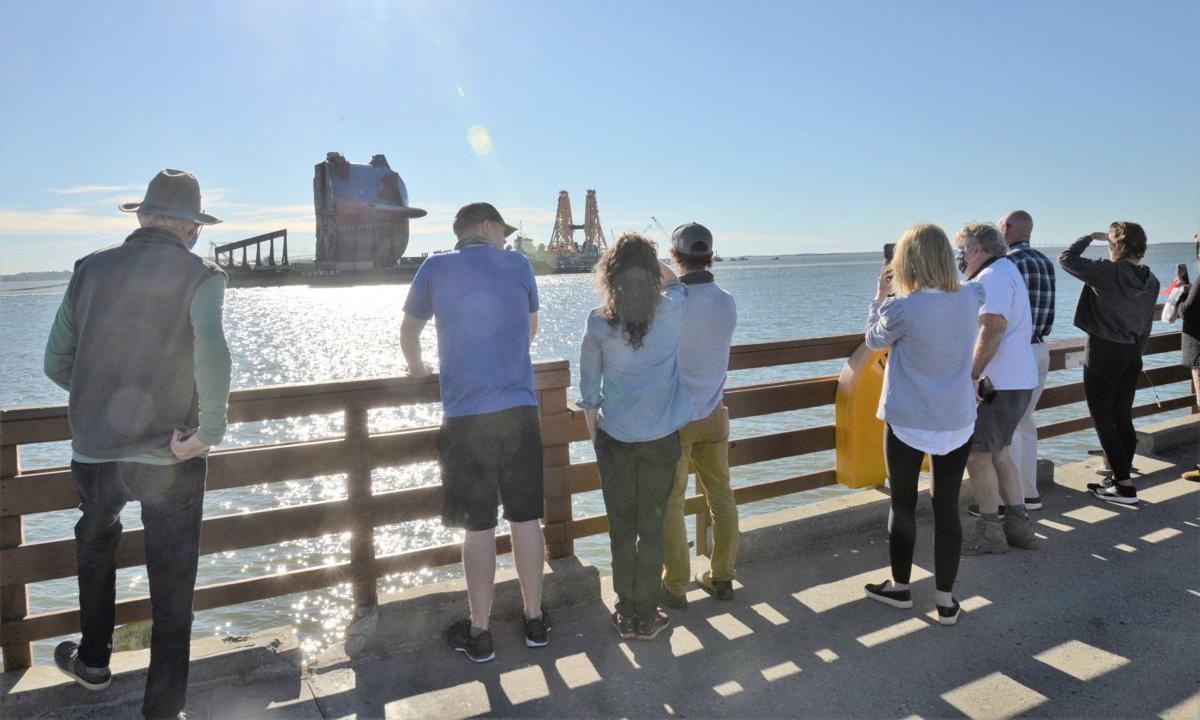 The departing bow of the Golden Ray drew a crowd to the pier.

The bow of the Golden Ray, above, passes under the Sidney Lanier Bridge on Tuesday as the Julie B heads out to sea. Below, a crowd gathers to watch the departing bow pass by the St. Simons Pier.

Smoke puffs from the stacks of a tug as it pushes the Golden Ray's bow through the shipping channel off St. Simons.

The departing bow of the Golden Ray drew a crowd to the pier.

The mega-barge Julie B headed out of the St. Simons Sound on Tuesday afternoon, hauling the gigantic bow section of the Golden Ray shipwreck with it.

The 3,100-metric-ton chunk of steel is going to a recycling facility in Gibson, La., speeding up its planned departure by weeks if not months, according to Unified Command.

The Julie B and its cargo cast off from the Port of Brunswick near Mary Ross Waterfront Park on the East River at 1:30 p.m., making the tight squeeze beneath the Sidney Lanier Bridge on the Brunswick River and out of the sound into open waters.

The Julie B and the ship’s bow had been docked at the port since Nov. 29, a day after the crane vessel VB 10,000 completed the crucial first cut in the Golden Ray salvage operation. The largest barge operating in the U.S., the Julie B had originally planned on sticking around until it could add a second section of the shipwreck to its expansive deck.

With the second cut into the shipwreck still not under way, officials decided it was best to send the first piece on ahead alone. The section is secured to the deck on its port side. It is 136 feet across by 104 feet long by 113 feet high.

It had been securely “sea-fastened” and cleared a Coast Guard inspection for its journey, Himes said.

Unified Command reasoned that the sooner it reached its destination in Louisiana, the sooner it no longer presented an environmental threat to the Golden Isles.

“We’re in the wreck removal phase of a pollution response,” Himes said. “When there are opportunities like this to take the section and get it to the recycling plant, we do that. We know residents want to see this section gone.”

At an average speed of 6 knots, the Julie B is expected to reach its destination in the Gulf of Mexico in eight to 10 days. T&T Salvage out of Sabine Pass, Texas, is the operation’s salvor, hired by the ship’s owner and insurer.

The ship is being cut into eight pieces using anchor chain powered by the VB 10,000’s system of pulleys and winches. The crane vessel also conducts the lifting and loading of sections onto barges.

Operations to cut off the ship’s stern could begin as early as this week.

That piece will be loaded onto a separate barge docked in waiting at the port. It will return after completing delivery.

The next scheduled cut will be the section to the shipwreck’s fore.

Julie B was originally scheduled to return to the shipwreck, from its dock at the Port of Brunswick, to take on that fore section before departing for Louisiana with both pieces.

Two cradles were specially built on the Julie B’s deck, each designed specifically to accept the shipwreck’s bow and the next fore section, Himes said.

“We have a responsibility to safeguard the environment, so we’re absolutely going to take this opportunity to move that piece on to the next port,” Himes said.

Unified Command consists of the Coast Guard, the Georgia Department of Natural Resources and Gallagher Marine Systems. It is responsible for ensuring that the salvage operation adheres to environmental protection standards established by the federal Oil Pollution Act of 1990.