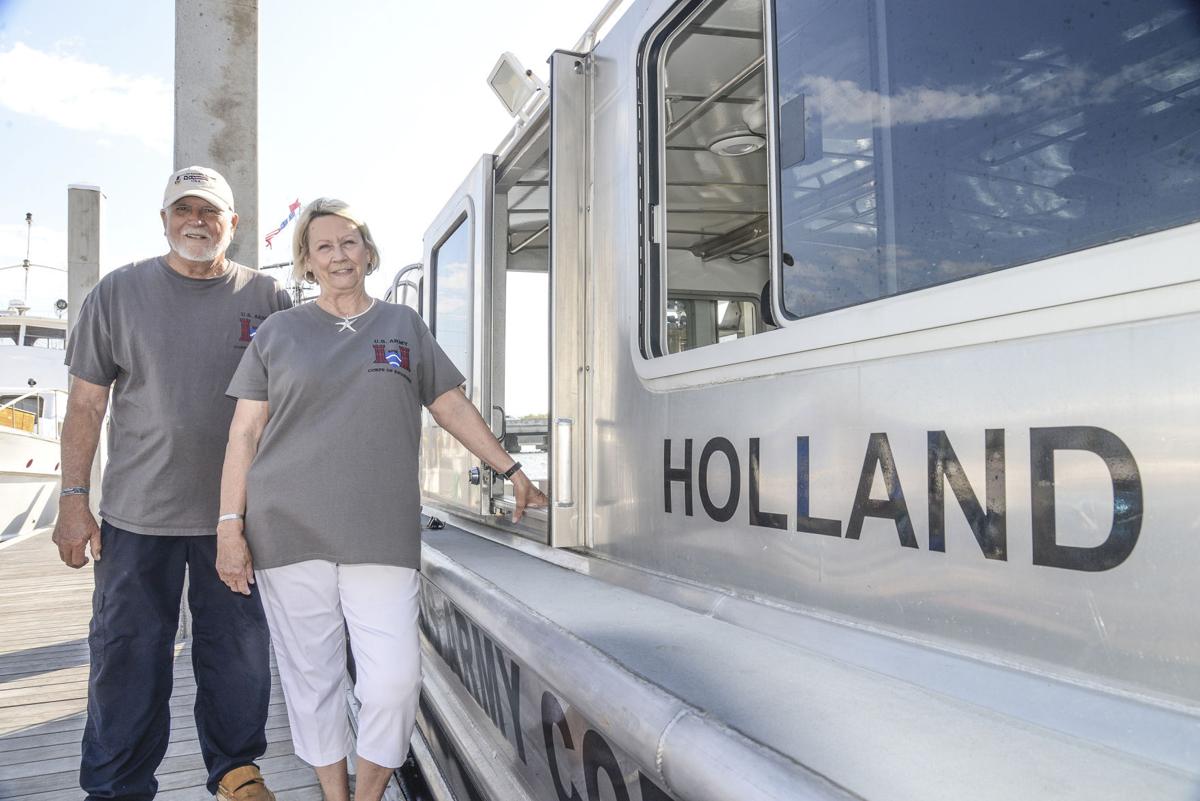 Jim and Mary Jo Holland with the S/V Holland which is named for their son, Christopher Holland. Below is a plaque dedicating the survey boat to Holland. 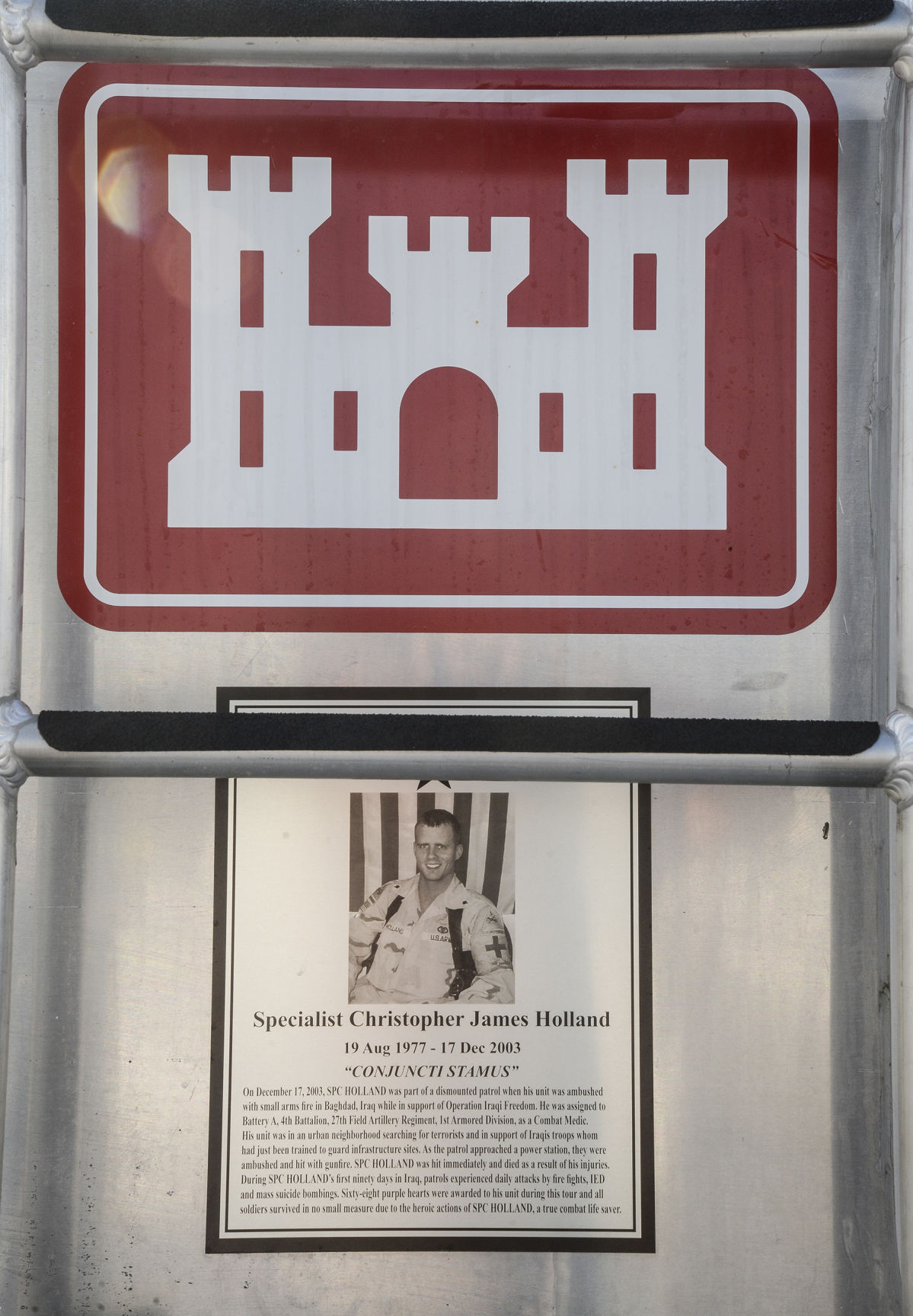 The plaque dedicating the survey boat to Specialist Christopher Holland. 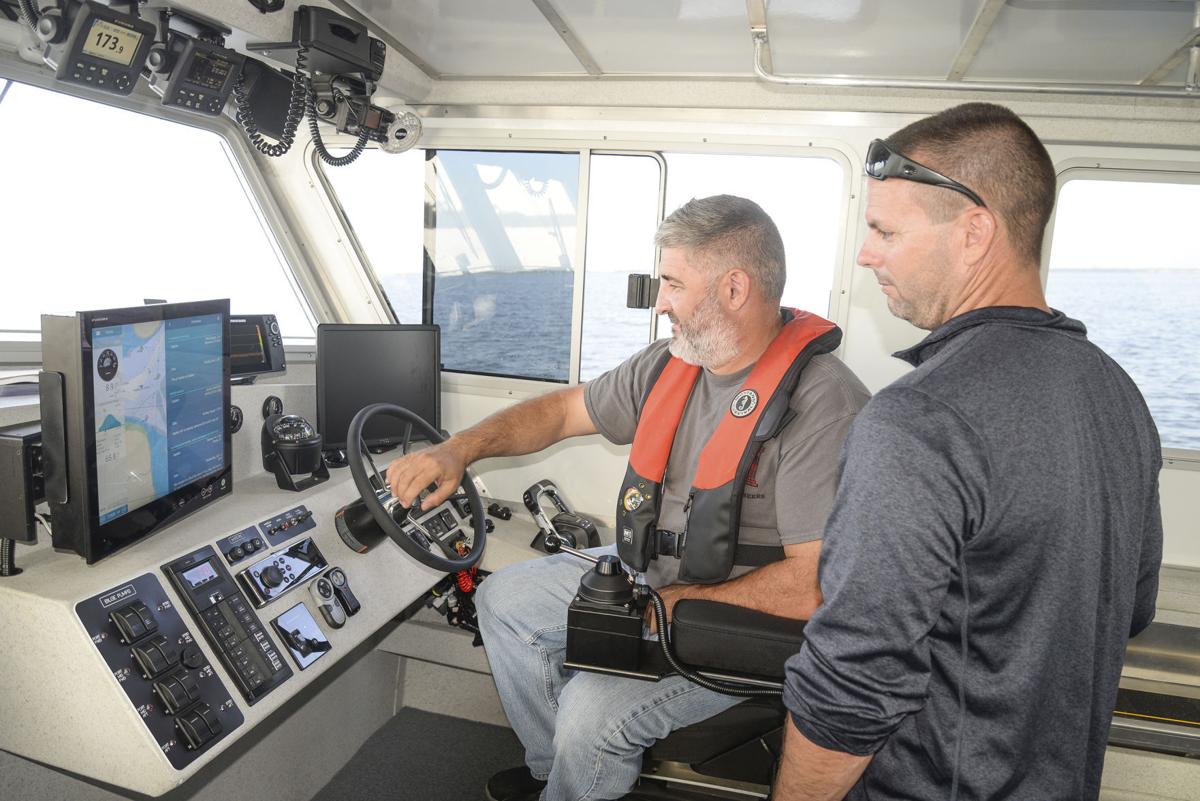 Jim and Mary Jo Holland with the S/V Holland which is named for their son, Christopher Holland. Below is a plaque dedicating the survey boat to Holland.

The plaque dedicating the survey boat to Specialist Christopher Holland.

A U.S. Army Corps of Engineers survey vessel named for an Army combat medic who saved his comrades lives before losing his own will work monthly in the port of Brunswick, his hometown.

The Survey Vessel Holland is named for Specialist Christopher Holland, a Brunswick High graduate who died Dec. 17, 2003, when his unit was ambushed while on patrol in Baghdad.

The 35-foot boat has a plaque with a photo of Holland in uniform. It notes that in his first 90 days in country with a field artillery battery attached to the 1st Armored Division, Holland’s unit was involved in firefights and was hit by improvised explosive devices and mass suicide bombings. As a result, 68 of his comrades received Purple Hearts and survived because of his expertise, the plaque says.

Corps of Engineers boat Capt. Jim Boderader, who retired from the Coast Guard in 2010, was on board with Capt. Brad Roberson, who was serving as the surveyor.

The Holland was named for a saver of lives who gave his own, Boderader said.

The Holland was one of two survey vessels dedicated last week in a ceremony in Savannah. The other is the S/V Martin named for Army Staff Sgt. Vernon Martin, who died Oct. 3, 2009, when an estimated 400 Taliban fighters assaulted an outpost defended by 53 soldiers. He was among eight killed and 27 wounded in the repulse of the Taliban.

The Holland made its first call Monday on what is likely to be monthly visits to Brunswick to survey the shipping channel from the outer bar to port facilities on the East and Turtle rivers, Boderader said.

Spec. Holland’s parents, Jim and Mary Jo Holland, came to Morningstar Marina Wednesday to meet the S/V Holland again just six days after it and the Martin were dedicated.

Jim Holland said he felt deep gratitude at the ceremony.

“The response from the community and all our friends is incredible,’’ he said. “It makes me feel good, so humble. It makes you feel good about your country.”

Mary Jo Holland called the ceremony beautiful and said the Corps of Engineers did a great job in honoring “two soldiers who sacrificed their lives.”

Billy Birdwell, a senior information specialist for the Corps’ Savannah office, said the response was astonishing with more than 200,000 hits on the Twitter feed from the ceremony and tens of thousands on Facebook.

Boderader said he was gratified that five soldiers stationed with Christopher Holland in Iraq came to the dedication.

“This has kind of brought these guys back together,’’ Boderader said.

It also forged a new friendship between the Hollands, Boderader and others at the Corps.

When he was looking for someone to honor through the naming of a Corps of Engineers working boat, Boderader said he was awed at what he learned about Holland and Martin. He also contacted their families and told them what he wanted to do.

“I was at my home on Tybee [Island] trying to reach out to the Holland and Martin families,’’ he said.

Mary Jo Holland said she was a little suspicious at the first call and, smiling at the memory, said she may have sounded a little crazy in that first conversation.

But once the process started, the families were kept up to date on every step from start to finish.

Boderader said he sent out images of the cutting of the first sheets of aluminum on the boat.

As for the naming for the two Georgia soldiers, it is a departure from the past.

The naming of the Georgia was for an obvious and all too common reason, while the Downs was named for a former Corps civilian employee. Boderader said there is nothing wrong with that, but he saw an opportunity to honor two coastal Georgians who had given their lives for their country.

Powered by twin 300-horsepower Yamaha outboard motors, the new boats are much faster.

“We got down here from Savannah in three hours. The Downs would have taken six,’’ he said.

Also, when one of the inboard diesels went down on the old boats, it could take months to repair partly because of the combination of diesel mechanics being rare and the government contracting process.

If one of the outboards go down, they can have another on in three days and get back to work while both the Downs and the Georgia had been out of service for months at a time.

Both of the old boats were in service a long time, and Birdwell said the same is likely to be true of the Holland and the Martin because both are “state of the art.”

The boats are equipped with navigation aids that will help the captains keep them on course to a degree that hasn’t been possible. During a short trip into the sound Wednesday morning, Boderader indicated some images on the screen that are “virtual buoys.”

The U.S. Coast Guard puts down the virtual buoys to warn of boating restrictions such as safety zones like the no wake zone around the Golden Ray.

In monthly surveys, the boats do cross sections over the channel as the sonar records depths, widths and other data. The sonar is so accurate that it detects the marks that cutter dredges leave on the bottom, Boderader said. The goal is to leave the bottom as natural as possible, he said.

Unlike the boats they replaced, the S/V Holland and Martin will be taken out of the water on a trailer more easily. During tropical storms they can be put on trailers and tied down on high ground. Sometimes they’ll be taken out because they have no work to do or to get them away from all the marine traffic in Savannah.

In a school year unlike any other, young learners could benefit in new ways from the escapism a well-read story provides.

One thing that is common among the spectators in the ongoing hearings and trials of the three men accused in the shooting death of Ahmaud Arbery are shirts and face masks with his likeness and slogans about his death.