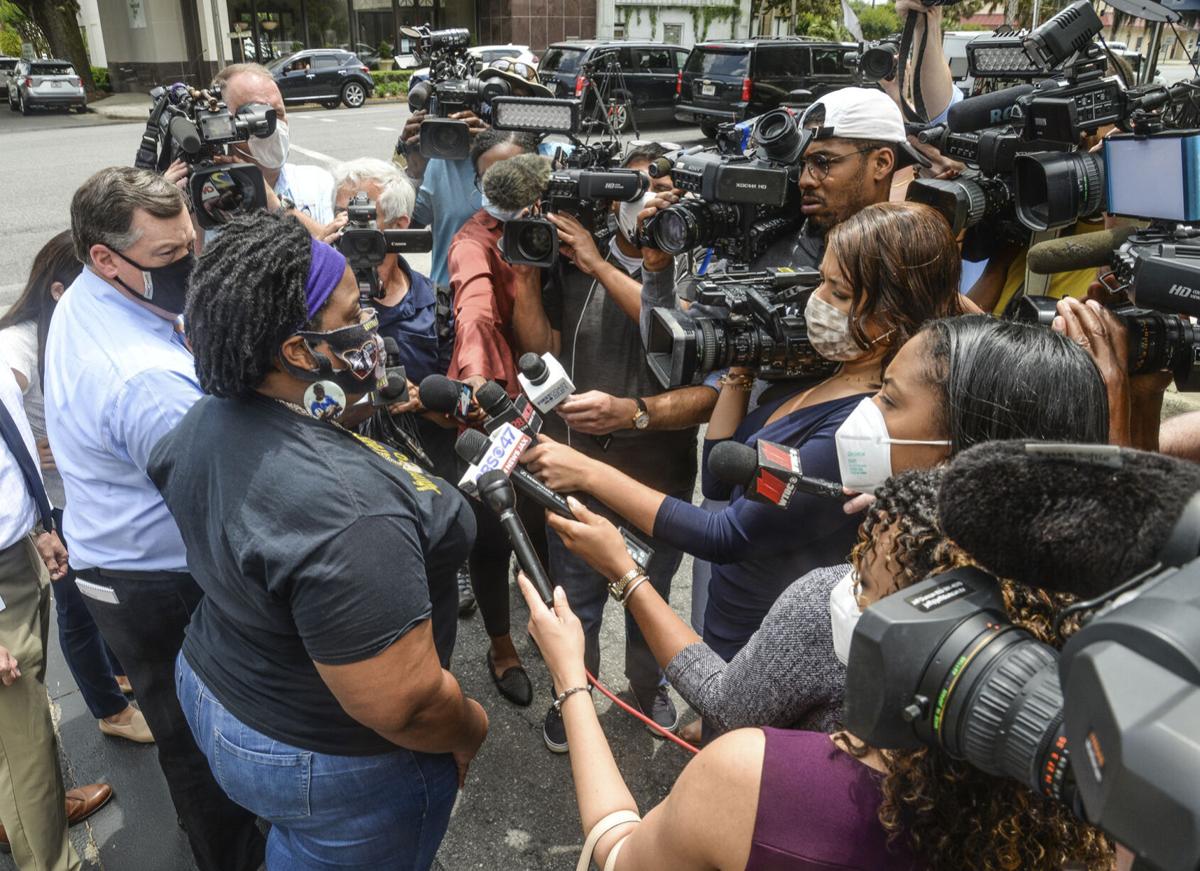 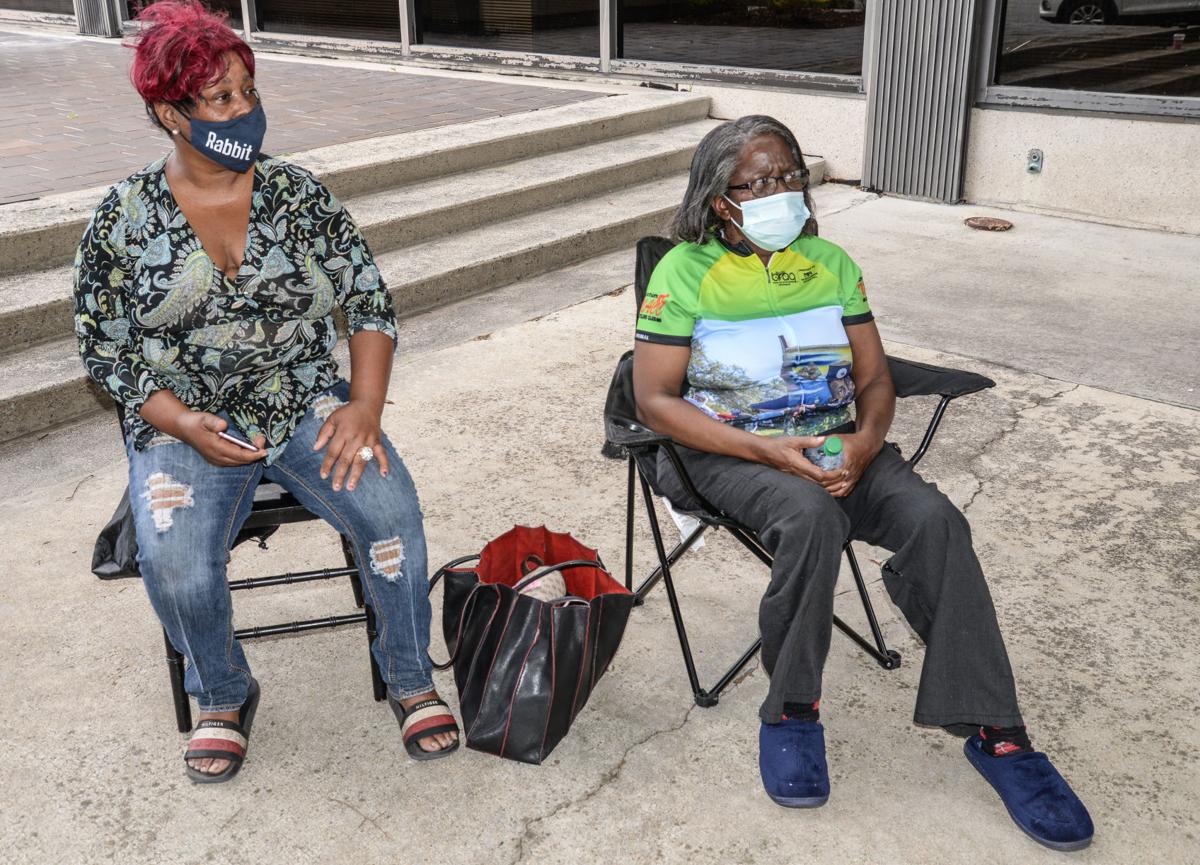 Arbery's aunt, Diane Jackson, right, and her friend Tonya Persinger sit outside U.S. District Court while the two McMichaels and Bryan hear the federal charges against them and their rights. 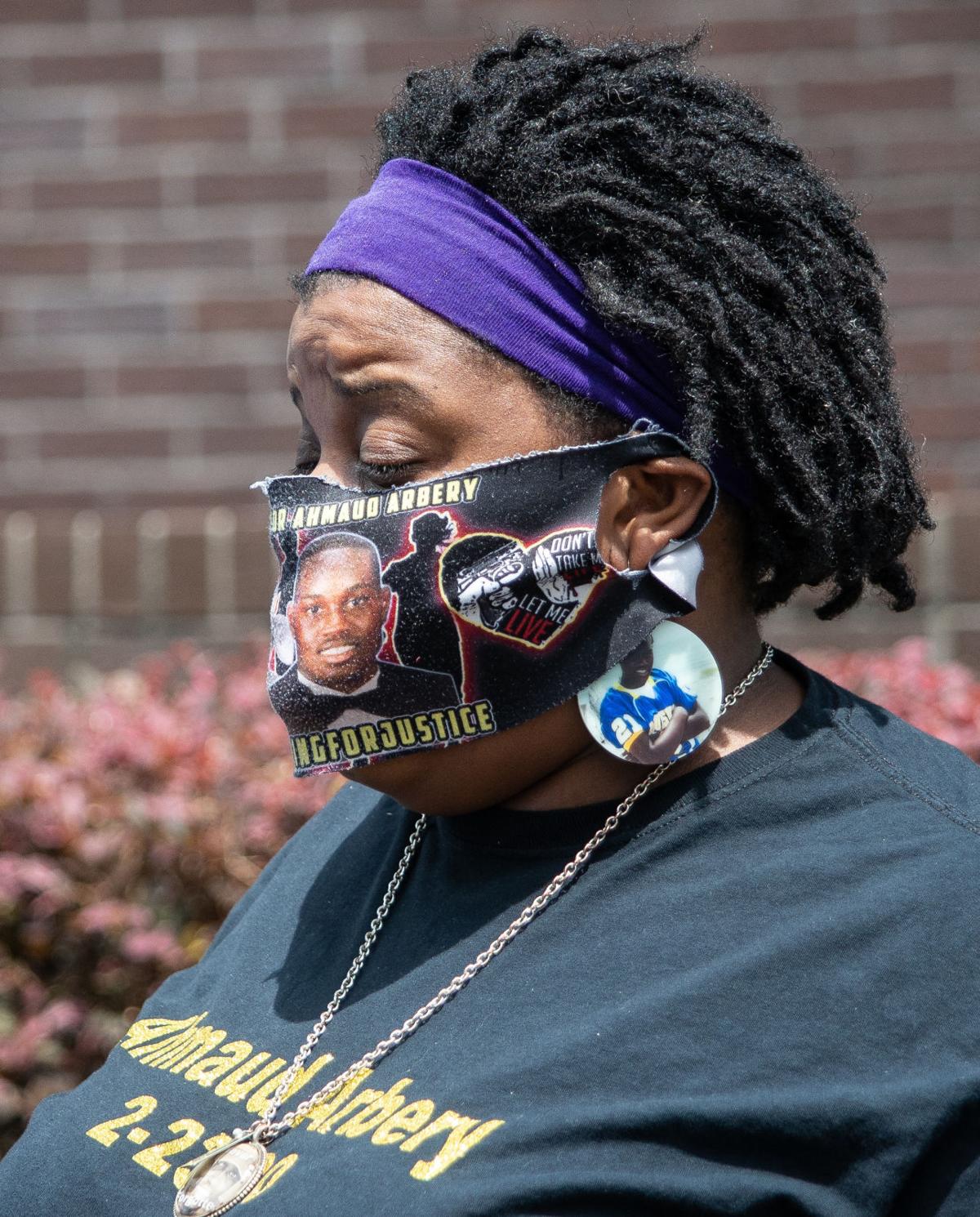 Thea Brooks wore a mask in memory of her nephew Ahmaud Arbery.

Arbery's aunt, Diane Jackson, right, and her friend Tonya Persinger sit outside U.S. District Court while the two McMichaels and Bryan hear the federal charges against them and their rights.

Thea Brooks wore a mask in memory of her nephew Ahmaud Arbery.

The three White men charged with federal crimes in the 2020 death of Ahmaud Arbery, who was Black, entered not guilty pleas in U.S. District Court in Brunswick Tuesday.

The first defendant to enter the courtroom was Travis McMichael, 35, the man who shot Arbery dead on Feb. 23, 2020, on a street in Satilla Shores.

Next came his father, Gregory McMichael, 65, the man who ran into their house that day and told Travis McMichael to get a gun.

Then came William “Roddie” Bryan, 51, the man who jumped into his pickup truck and joined the armed McMichaels as they pursued the unarmed Arbery as he ran through the south Glynn County neighborhood.

All three men wore the bright orange jail clothes of the Glynn County Detention Center, where each has been held without bond since GBI agents arrested them in May 2020 on state charges that include felony murder.

Marcus Arbery watched from the front row of the courtroom gallery as a judge read the federal hate crime charges against the three accused of killing his 25-year-old son.

Women sitting beside and behind Marcus Arbery rubbed his shoulders and gently hugged him.

A federal grand jury indictment handed down last month charges the three of interfering with Ahmaud Arbery’s rights and attempted kidnapping. Additionally, the two McMichaels are accused in federal court of using, carrying and brandishing a firearm in a crime of violence. Travis McMichael is further charged with discharging a firearm in the commission of a violent crime.

The FBI led the federal investigation.

Travis McMichael, Gregory McMichael and Bryan all pleaded not guilty to all charges against them.

Each man was represented by an appointed attorney in federal court. If found guilty, they could receive up to life in prison, with between seven and 20 years added for each additional charge. Fines of up to $250,000 are possible if convicted.

“It’s been a long time coming,” he told The News, speaking briefly in the crowded courtroom. “It’s time for African Americans to finally get some justice.”

It was the first time Marcus Arbery had seen the three men face-to-face. Due to COVID-19 pandemic precautions, the three men have appeared via video from the jail in all previous state court proceedings at the Glynn County Courthouse.

Ahmaud Arbery’s aunt, Thea Brooks, was among those who comforted Marcus Arbery in the courtroom.

“This was a very emotional time for him,” said Brooks, speaking afterward to a large gathering of media outside the federal courthouse, 801 Gloucester St. “It was the first time he had been in the same courtroom with the men who killed Ahmaud. He’s very upset, very frustrated.”

Travis McMichael shot Ahmaud Arbery three times at close range with buckshot from a Remington 12-gauge shotgun as the two men struggled for possession of the gun. Gregory McMichael looked on from the truck bed, holding a .357 magnum.

Moments earlier, Gregory and Travis McMichael had armed themselves, jumped into a pickup truck and pursued Arbery after he ran past their house on Satilla Drive. The two said they suspected Arbery of burglary.

Bryan saw Arbery run past his home on Burford Road with the McMichaels pursuing him in a pickup truck. Bryan joined the pursuit and took the grim video of the fatal shooting, video that sparked national outrage after it was leaked to the internet May 5, 2020.

Federal prosecutors say the McMichaels and Bryan chased Arbery in their pickup trucks for several minutes, yelling at him, brandishing firearms and using their vehicles to block Arbery’s escape.

The federal crimes accuse the defendants of taking the alleged actions because Arbery was Black.

Brooks said the acknowledgement that race allegedly dictated their actions was long overdue. She noted a GBI investigator’s testimony last June in Glynn County Magistrate Court. The investigator said Bryan told him that Travis McMichael uttered an expletive followed by the “N” word after shooting Arbery.

Arbery died on Holmes Road moments after the shooting.

“The slur that Travis McMichael used when he killed Ahmaud, that made us realize this truly was a hate crime,” Brooks said. “We feel like today was another step closer to justice for us.”

The federal case is being prosecuted by Tara Lyons, assistant U.S. Attorney with the Southern District of Georgia. Lyons said the prosecution would provide the defense with its evidence in the case within 30 days.

The defense attorneys were granted 90 days to respond to the evidence presented by prosecutors.

Matters scheduled for discussion include defense attorneys’ motion to exclude defendants’ jail calls from trial, a motion to address Arbery’s character outside of a jury’s presence, and a motion on a defendant’s intention to introduce evidence.