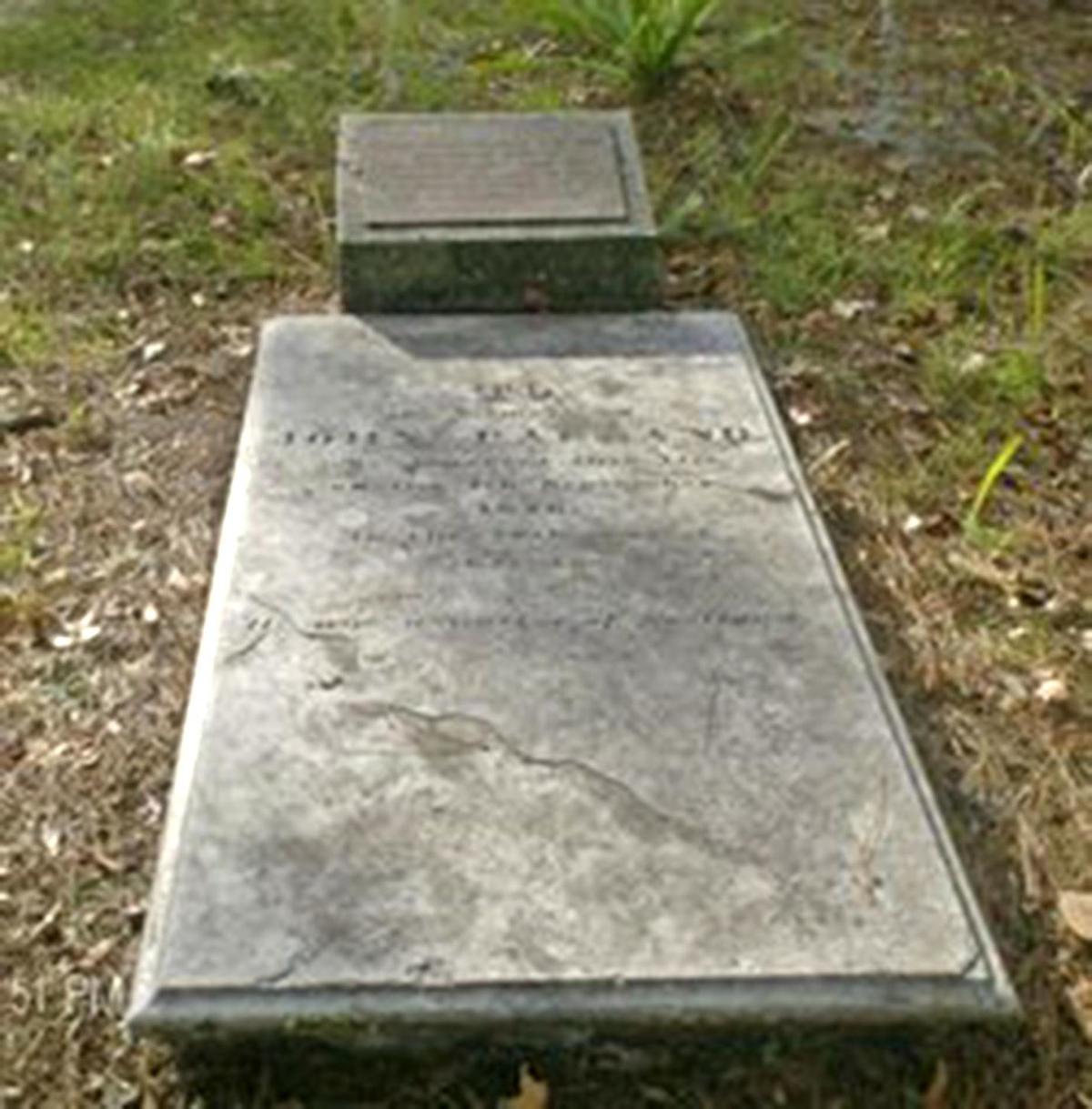 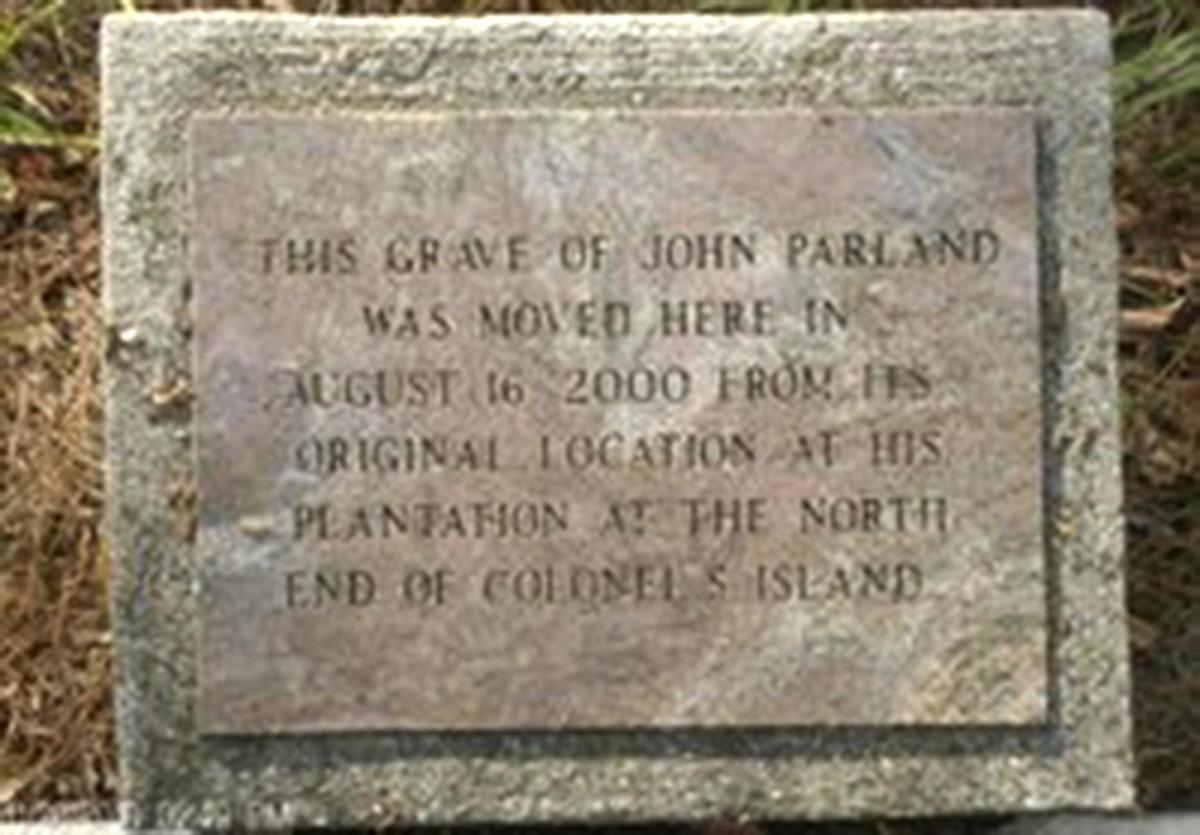 Who is John Parland and how has his legacy transcended the test of time to remain relevant still today in the Golden Isles?

Anybody? No, not you, Amy. Bill, put your hand down. This question is for everyone else out there.

Ok, I will give y’all a hint. John was better known back in his day as The Colonel. His day was the early 19th Century, when he presided over four mainland plantations. The Colonel might remain little more than a distant historical footnote, but that moniker stuck with one of his holdings.

We know it today as Colonel’s Island, home to one of the nation’s largest Ro-Ro ports. For those not up on the local lingo, Ro-Ro refers to those huge oceangoing car carrier vessels, which roll vehicles on at one port and roll them off at another. Colonel’s Island, just south of the Sidney Lanier Bridge on U.S. 17 across from Jekyll Island, is part of the Port of Brunswick.

The gargantuan city-block-long freighters are a familiar sight heading in and out of the St. Simons Sound, with around 40 ships arriving monthly. (Of course, the shipwrecked Ro-Ro Golden Ray also is a familiar sight of late, lying overturning on its port side just south of the shipping channel, between St. Simons and Jekyll islands. But that is another story altogether.)

So John Parland is The Colonel behind Colonel’s Island. But his name has not faded quietly into the past. It was just 20 years ago that John Parland prominently resurfaced. Quite literally. More about that in a minute.

Most of what little is known of John Parland comes from Amy Lyn Hedrick, keeper of that nifty local historical resource, GlynnGen.com. But to be honest, I got my copy of Amy’s research from Bill Brown, Glynn County’s 101-year-old historical resource. During a recent visit Wylie and I paid on Bill, the lifelong local realtor shared with me intriguing plans that showed how Colonel’s Island nearly became South Brunswick.

But back to John Parland. We know he was born Dec. 1, 1780, in Scotland. He eventually immigrated to America, settling quite successfully in Glynn County, according to GlynnGen.com. His holdings included the Colonel’s Island spread, as well as three additional plantations: Longwood, Dyke and Gowrie. One of those was located on Blythe Island.

His Colonel’s Island plantation was planted primarily in sea island cotton, but he also grew sugar and rice, and processed lumber on his holdings. Additionally, his estates raised staples such as corn, potatoes and poultry, which he marketed to neighboring plantations.

He was married to Mary Ann Scarlett. They had two daughters, Jean Adams Parland and Frances Ann Scarlett Parland. John died on Sept. 7, 1836, thrown from his horse while riding about on Colonel’s Island.

“He was buried on a forested bluff overlooking the Brunswick River, not far from his plantation home on Colonel’s Island,” Hedrick writes. (Mary Ann, by the way, would remarry two years later, this time to a Colonel William McKay of Wayne County, Ga. She was just 33 years old when she died on Aug. 20, 1850. She is buried in a Scarlett family cemetery in Glynn County, according to findagrave.com.)

The Colonel left all of his holdings to the two girls. “According to legend,” GlynnGen.com recounts, this inheritance turned Jean and Francis Ann into “the first and second wealthiest people in Glynn County in the year 1836.”

Frances was a lifelong bachelorette. Jean and husband Henry C. King of Wayne County had three daughters. All of the family’s holdings had been sold off or leased by the late 19th century. The bulk of the Colonel’s Island holdings apparently went to the Brunswick Harbor & Land Co., according to a document provided by Bill Brown.

Its board of directors included Norman W. Dodge of the wealthy Dodge family, whose timber interests in Glynn County had greatly kickstarted the local economy. Several other New Yorkers are listed. Serving as Brunswick Harbor & Land’s vice president was Gen. John B. Gordon, who had risen to fame as a Confederate general during the Civil War.

Their plans for turning the island into South Brunswick included neighborhood streets such as Dodge and Grand avenues as well as Gordon Square, East Park Drive and Raleigh Park, according to a blueprint for the development. Of course, this never materialized.

Fast forward to 2000. Colonel’s Island had been the possession of the Georgia Ports Authority for some 30 years by then, and the well-established Ro-Ro shipping business was booming.

Through it all, the resting place of John Parland had remained on Colonel’s Island, unscathed.

But the increasing supply of incoming ships created a demand for expansion. The Colonel’s burial plot was part of a 55-acre tract earmarked for a new dock. Before relocating John Parland, Georgia law required the port exercise due diligence that included archeological studies and a state court hearing. The port also was required to give notice to direct descendants.

Since Frances had no children and Jean had all daughters, tracing a direct descendant proved difficult for Archeologists with Southeastern Archeology Service of Athens, the group hired by the port.

However, the public appeal may have helped answer lingering questions for many African Americans who responded to the appeal, according to a 2000 article in The Brunswick News.

“They knew they were descended from a slave and a Scottish planter,” archeologist Tom Gresham told The News.

Parts of the 163-year-old wooden coffin remained intact, including bits of the cloth covering and the tacks that held it in place. More surprisingly, the researchers “found Parland’s skeleton largely intact,” The News reported.

Edo Miller and Sons Funeral Home donated a steel vault told hold John Parland’s remains in his new resting place. All of the recovered coffin parts also went into the vault. The City of Brunswick provided a new plot.

The Colonel behind Colonel’s Island now rests in the city’s Oak Grove Cemetery. John Parland’s grave is located behind the 182-year-old cemetery’s small chapel. So now we know.

After two days of onsite coordinating in the St. Simons Sound, work could begin Saturday to drive the first support pilings for the environmental protection barrier that will surround the shipwrecked Golden Ray during its removal, according to Unified Command.

Taking a tour of the Ceylon tract in Camden County

An environmental group is concerned that more delays in the release of court records could open the door to oil exploration off the Georgia coast.

It’s take-two for House Bill 93, which received the unanimous vote of the state House Natural Resources Committee for the second consecutive year Thursday.