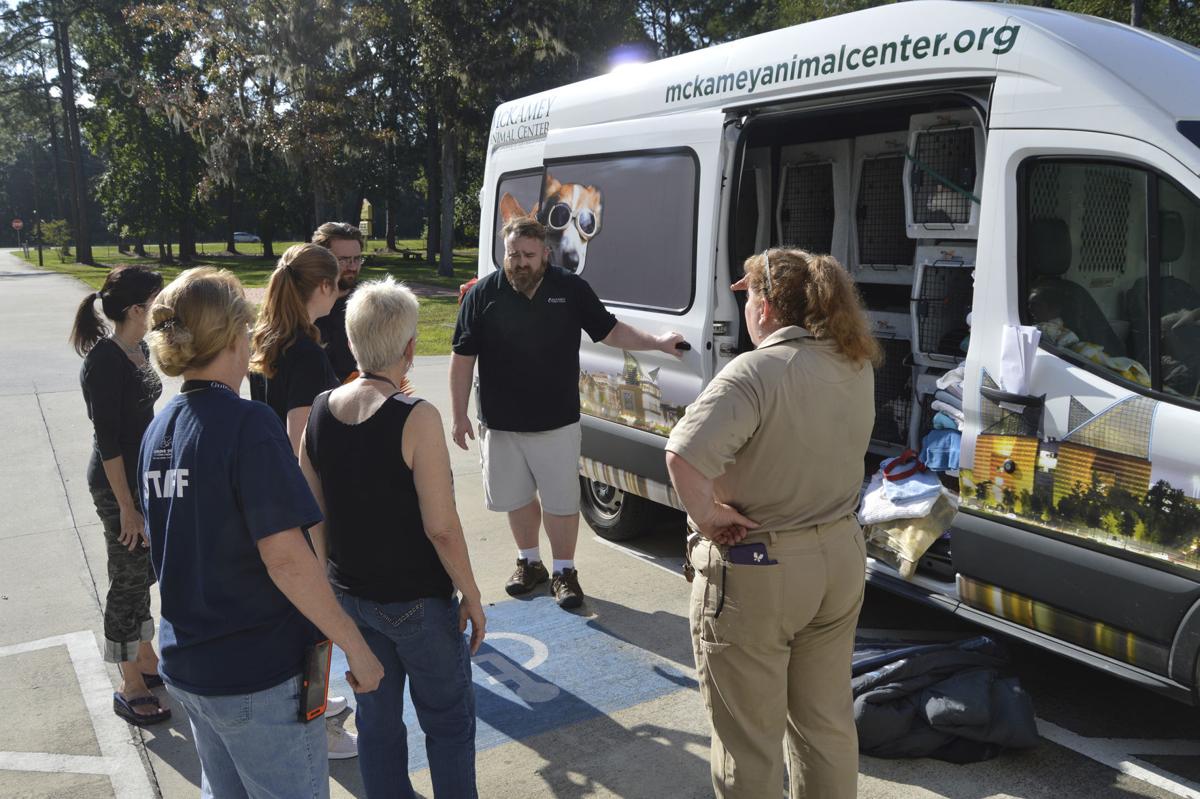 Myke Bagnall of Mckamey Animal Center in Chattanooga, Tenn., center, talks to volunteers and staff members of the Humane Society of Coastal Georgia and Glynn County Animal Services as they load up animals from both shelters to evacuate them ahead of Hurricane Irma’s arrival. 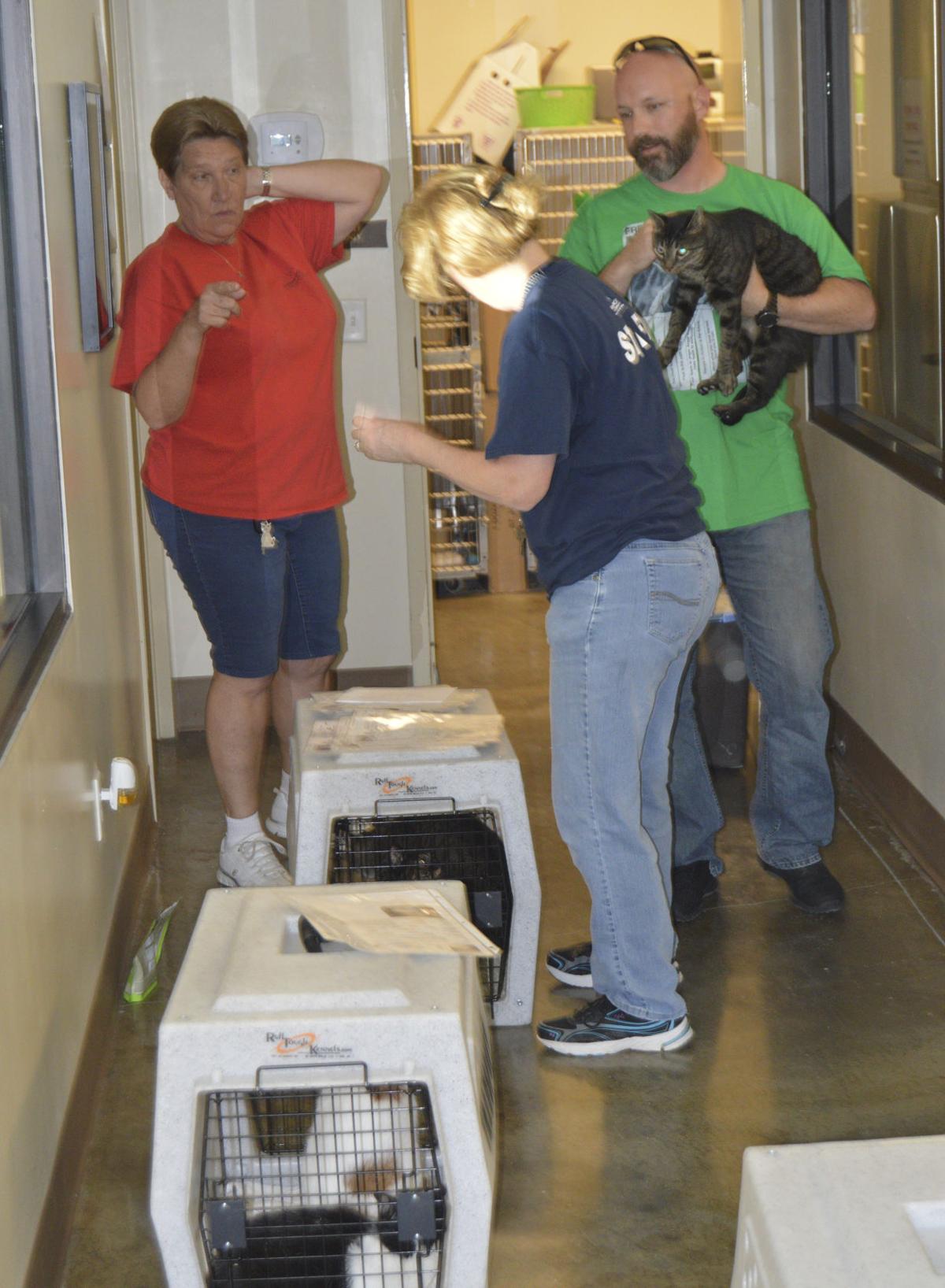 Sharon Mathews center, Ben Penman, right, load cats at the Humane Society of South Coastal Georgia Friday with help from a volunteer as they load animals for evacuation as Hurricane Irma approaches.

Myke Bagnall of Mckamey Animal Center in Chattanooga, Tenn., center, talks to volunteers and staff members of the Humane Society of Coastal Georgia and Glynn County Animal Services as they load up animals from both shelters to evacuate them ahead of Hurricane Irma’s arrival.

Sharon Mathews center, Ben Penman, right, load cats at the Humane Society of South Coastal Georgia Friday with help from a volunteer as they load animals for evacuation as Hurricane Irma approaches.

Glynn County Animal Control and the Humane Society of South Coastal Georgia spent Thursday and Friday evacuating animals with the help of McKamey Animal Center, which sent people down from Chattanooga, Tenn., to help.

A mandatory evacuation in anticipation of Hurricane Irma was declared Thursday for Glynn County and went into effect at 8 a.m. Friday morning. Animal control and the Humane Society had to evacuate the animals at their shelters as well.

Myke Bagnall and Evan Shepard, both with McKamey, drove around seven-and-a-half hours Thursday night and Friday morning to come to the aid of the Humane Society, along with Julie Holmes-Taylor, manager of Glynn County Animal Control. The pair helped animal control first, and then shifted efforts to the humane society.

Humane society Executive Director Virginia Schlegel said Bagnall, Shepard and Holmes-Taylor were life-savers this time around. They couldn’t have evacuated the Humane Society shelter in time last year, when Hurricane Matthew hit the Golden Isles, without animal control’s help either, she said.

All told, 140 animals were evacuated from the animal control shelter on Thursday and Friday and another 127 were evacuated from the Humane Society’s shelter. Animal control’s evacuees were split between Chattanooga, an animal shelter in Gwinnett County and the fairgrounds in Waycross. The Humane Society sent some to Chattanooga and some to foster homes, with the majority also going to Waycross.

A number of animal control and Humane Society workers will be staying in Waycross with the animals for the duration of the storm.

Bagnall and Shepard are not regular drivers for McKamey, but with all the animals being evacuated from south Texas and now Georgia and Florida, they had to step up. Bagnall has driven for the center before, and on trips longer than this, he said. This was Shepard’s first trip of such a distance for the animal shelter.

The center helped animal shelters in Texas and Louisiana following Hurricane Harvey. Bagnall drove to St. Landry Parish Animal Control in Opelousas, La., to take animals so they could move more in from the areas affected by Harvey.

Once Irma has passed and the Glynn County Animal Control and Humane Society shelters are back up and running, the animals will return at the earliest possible opportunity.

Animal control is closed for the duration of the storm, and those with pets are encouraged to take them along when they evacuate. Buses provided by Glynn County schools to evacuate residents to Red Cross shelters in Columbus will accept pets at Lanier Plaza. Buses will be picking up residents Friday.

Pickup locations are listed at glynncounty.org/773/Severe-Weather-TS-Hurricane-Updates.