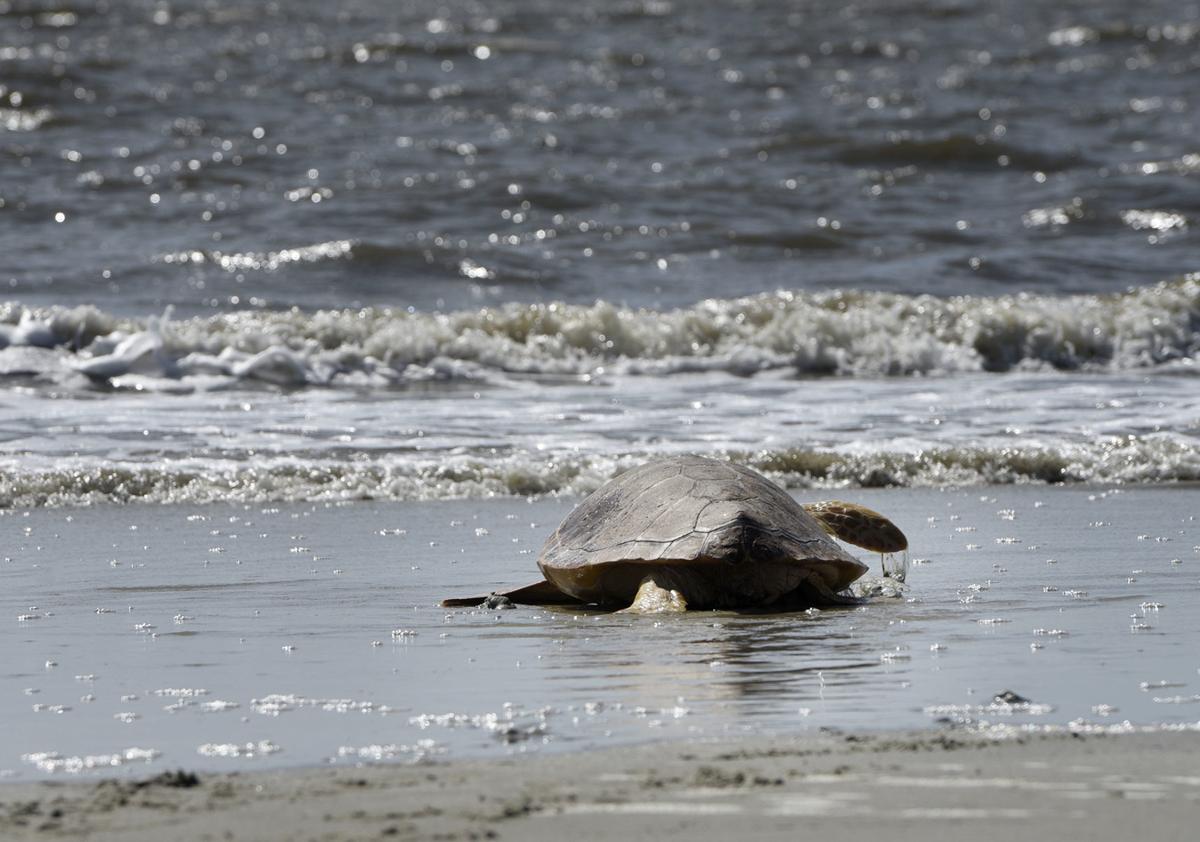 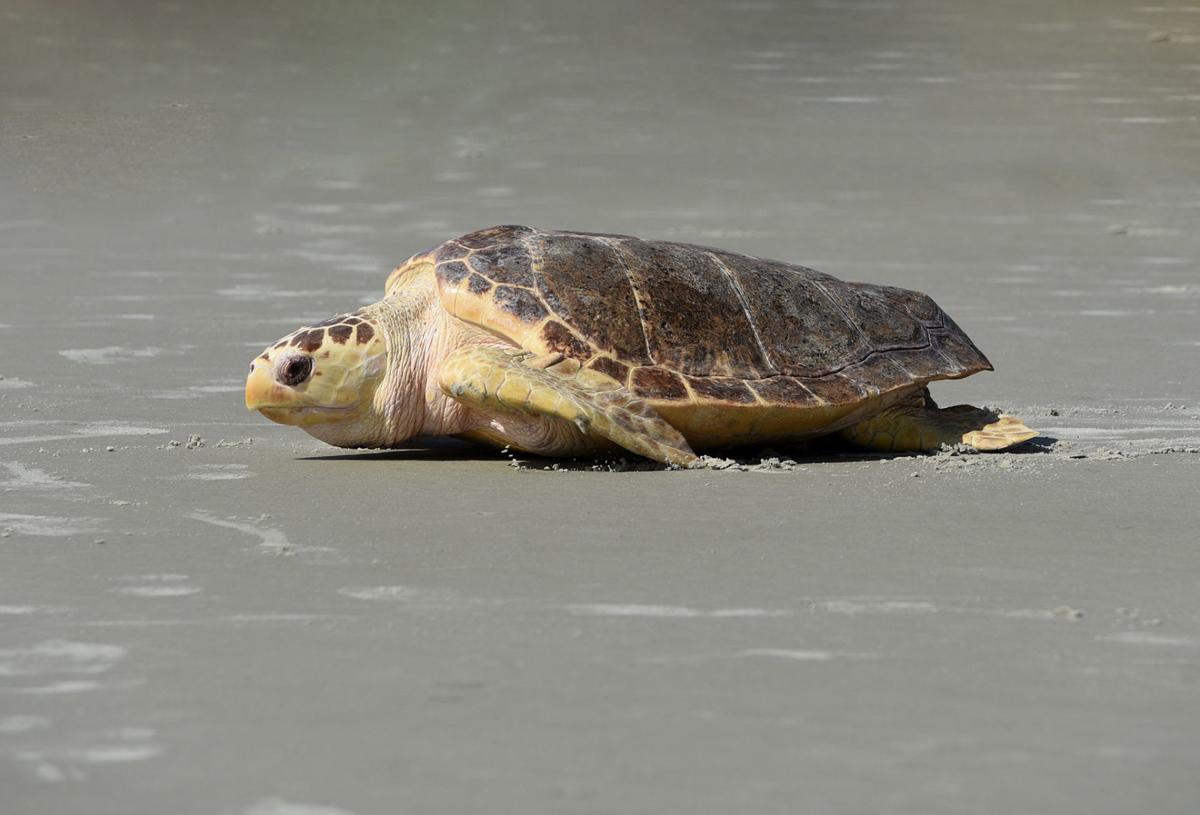 The nearly full moon shined brightly in the dark sky, making the ocean waves beneath sparkle.

Nearly 40 people stood on the beach, and all had their backs turned on that beautiful scene, as something even more magical and stunning took place further up near the beach dunes.

A loggerhead turtle had crawled from the Atlantic up onto Jekyll Island just before midnight and found what she hoped would be a safe place to lay her nest of eggs. At that moment, she’d fallen into a trance, called “nature’s epidural,” as she went through the painful contractions. It’s possible she didn’t even notice that she had a growing audience.

The crowd that gathered nearby were participants in two programs offered by the Georgia Sea Turtle Center that allow the public an opportunity to see firsthand the work that goes into protecting sea turtle nesting.

The center offers a Turtle Walk program nearly every night during nesting season, as well as Ride with Night Patrol and Ride with Dawn Patrol programs, which provide an even more up-close experience. If the biologists find a turtle nesting while on patrol, the ride-along participants are allowed to help with their work.

“It’s a really fairly magical experience, seeing something that’s supposed to be a marine animal coming onto the beach for the first time in its life and knowing that that animal is three times older than me,” said Tess DeSerisy, an AmeriCorps member on this summer’s patrol team, during a recent Night Patrol session.

The data collected by the dawn and night patrols is used to determine the best management practices to protect sea turtles.

“Sea turtles are endangered, meaning that they face a lot of threats and that the numbers of them in the wild are too low,” said Skyler Klingshirn, an AmeriCorps member and DeSerisy’s patrol partner that night. “We have to be out here, trying to figure out information about them, so we can protect them and make that number go up.”

That night’s patrol began just as a gorgeous Jekyll Island sunset had gone down. Patrol members picked up the ride-along participants at the Great Dunes Park pavilion and provided a few reminders before the two patrol teams headed out.

“Turtles are very sensitive to white light, and so we’ll be educating a lot of patrons on the beach tonight about our lighting ordinance on the island,” DeSerisy said. “But we ask that you guys don’t have lights of your own.”

AmeriCorps members on Jekyll Island make up the turtle patrol teams. Dawn and night patrols are completed daily during nesting season. Their role is both to complete research and to educate Jekyll visitors on sea turtle protections.

“We were supposed to start the 15th of May, but this year our nesting season just boomed right away,” DeSerisy said. “So we started the sixth of May.”

This year’s sea turtle nesting numbers have quickly surpassed last year’s total numbers, and conservation efforts to protect the turtles are a contributing factor to this year’s nest increase. The Dawn and Night Patrol programs offer a chance to see that work in action.

The night patrol team spends about nine hours on the beach, walking and driving while looking for sea turtle tracks. As they try to spot tracks, they also stop to educate the public about best practices for protecting the turtles and sometimes to knock down the occasional sand castle. They stay alert during the night thanks to snacks and coffee.

“It doesn’t really feel like working,” DeSerisy said. “We love it, and people love it. We get generally good responses from the public, so it’s worth all the sleepless nights and the coffee intake.”

They explained their research and conservation tactics throughout the patrol, answering questions easily as they watched for tracks and recorded notes.

“Loggerhead tracks, they can be about 2 feet wide, and they walk with an alternating fin pattern, so one after the other,” said Klingshirn, during a walking portion of the patrol. “So there’s kind of little swooshes that are alternating that you’ll see down the side, and sometimes you’ll even see a little drag in the middle from their tail.”

When only one set of fresh tracks is found, the biologists know they’ve likely come across a turtle in the nesting process. One researcher will approach the turtle quietly, without any light, to assess what stage of nesting she’s in and begin recording the data.

When she begins to drop her eggs, a member will give the signal for the others to approach and begin collecting data, including genetic information.

“We take one small skin biopsy from her, and then we also take one egg from each nest,” Klingshirn said. “And then we’ll empty the contents in the ocean and keep the egg shell and put it in a little vial.”

Both the skin biopsy and the vial of preserved egg shell will be sent to the University of Georgia, where the DNA will be extracted and the turtle’s nesting history recorded.

“It’s a study that is done from beaches in northeastern Florida all the way up to Virginia,” Klingshirn said. “So we’re able to learn a lot of cool information about the northern unit of loggerheads.”

That night, about two and a half hours into the patrol, DeSerisy and Klingshirn were alerted to a turtle that had just begun to nest near the south end of the island. The calm pace of the patrol transformed quickly, and a flurry of activity began. The biologists immediately began recording data.

When the turtle began to lay eggs, Klingshirn gave the signal, and the night patrol team, along with the ride-along participants, were able to approach the nest.

The biologists began taking measurements to record the turtle’s size. The average length of a loggerhead is 90 centimeters, and the average height is 60 centimeters.

The data was gathered as the turtle dropped her eggs into the hole she’d dug on the beach, before she began to cover up the nest with dirt.

On average, the turtles lay about 120 eggs — which look like squishy ping pong balls — per nest, and loggerhead turtles typically lay four to five nests per season.

Once the nest is covered, the turtle returns to the ocean, never to see her hatchlings. The nesting process takes less than two hours.

“We take a plastic screen, kind of like a plastic chicken wire almost, and we’ll put it over top the egg chamber, which protects it from any predators and will also allow for hatchlings to come out of the egg chamber when it’s their time to hatch,” Klingshirn said.

The AmeriCorps members will also stick a sign nearby reminding passersby the these turtles are federally protected. Then they go on with the remainder of the night patrol, which ends at 6 a.m., just as the dawn patrol arrives.

The Ride with Night and Dawn Patrol programs allow the public to see the work that these researchers put into protecting sea turtles. The program aims to makes the public feel more connected to the sea turtles, Klingshirn said.

“I think it’s really awesome that we offer this, so more people can get involved with it,” she said.