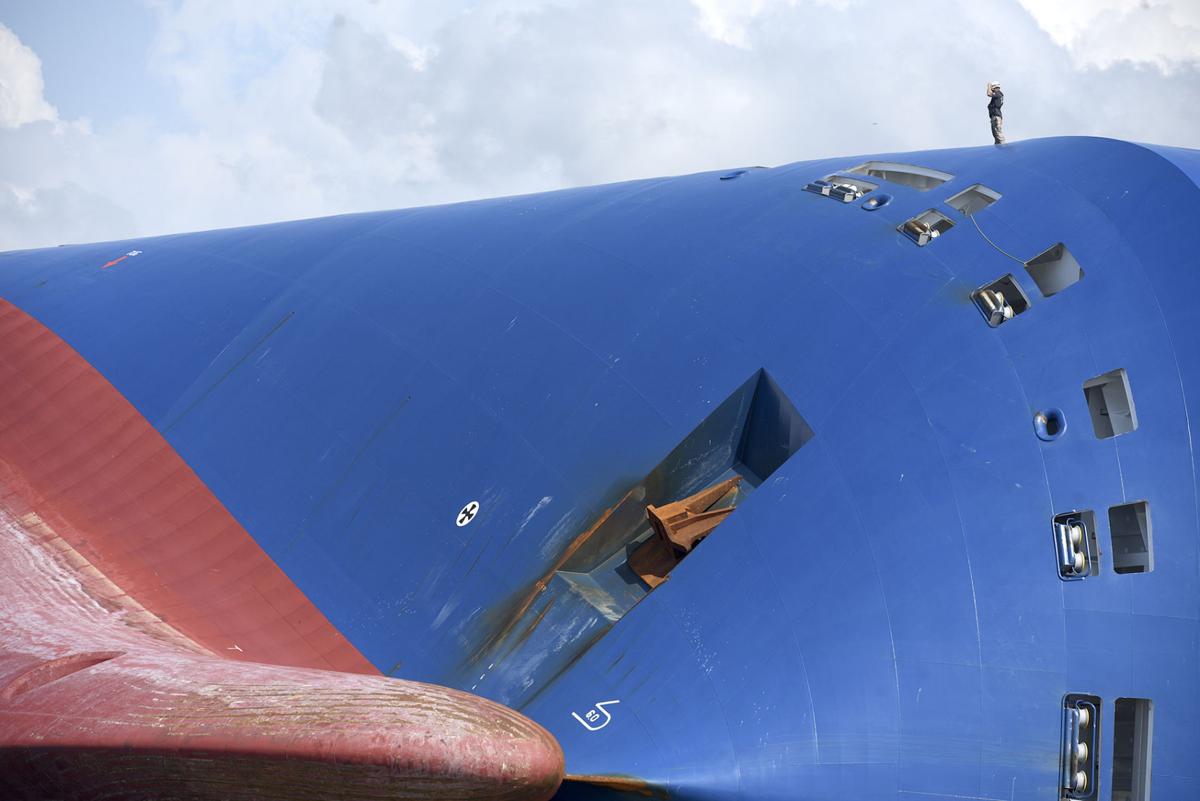 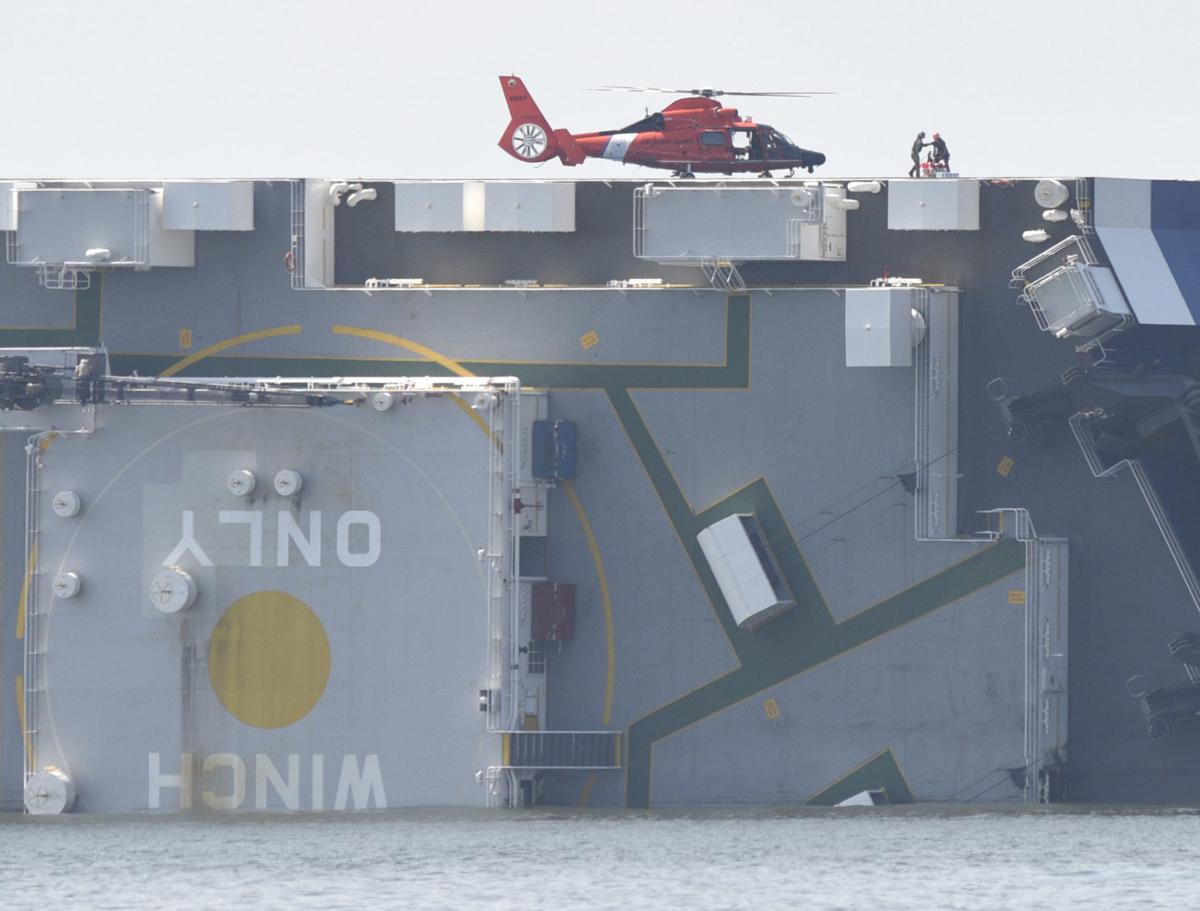 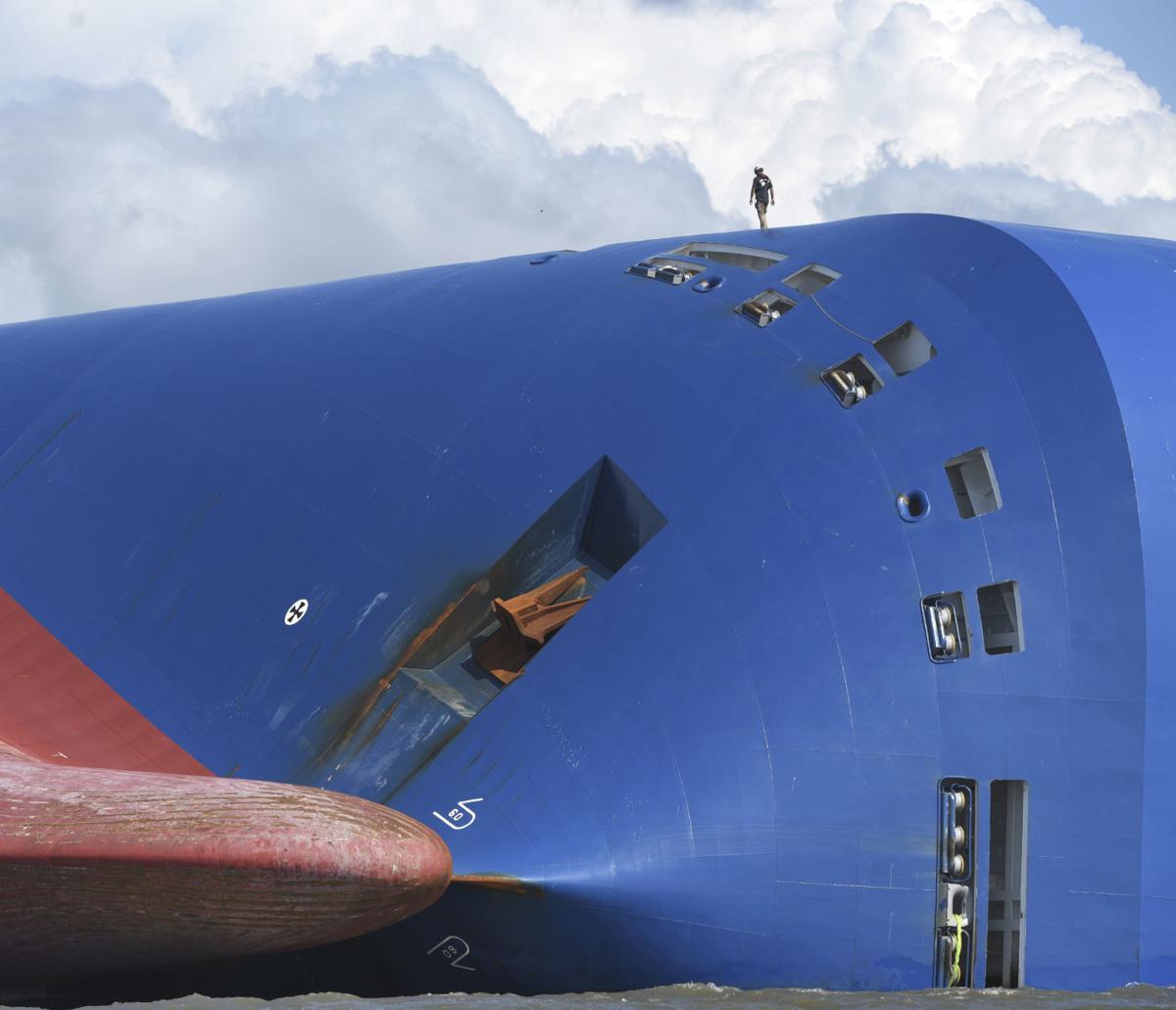 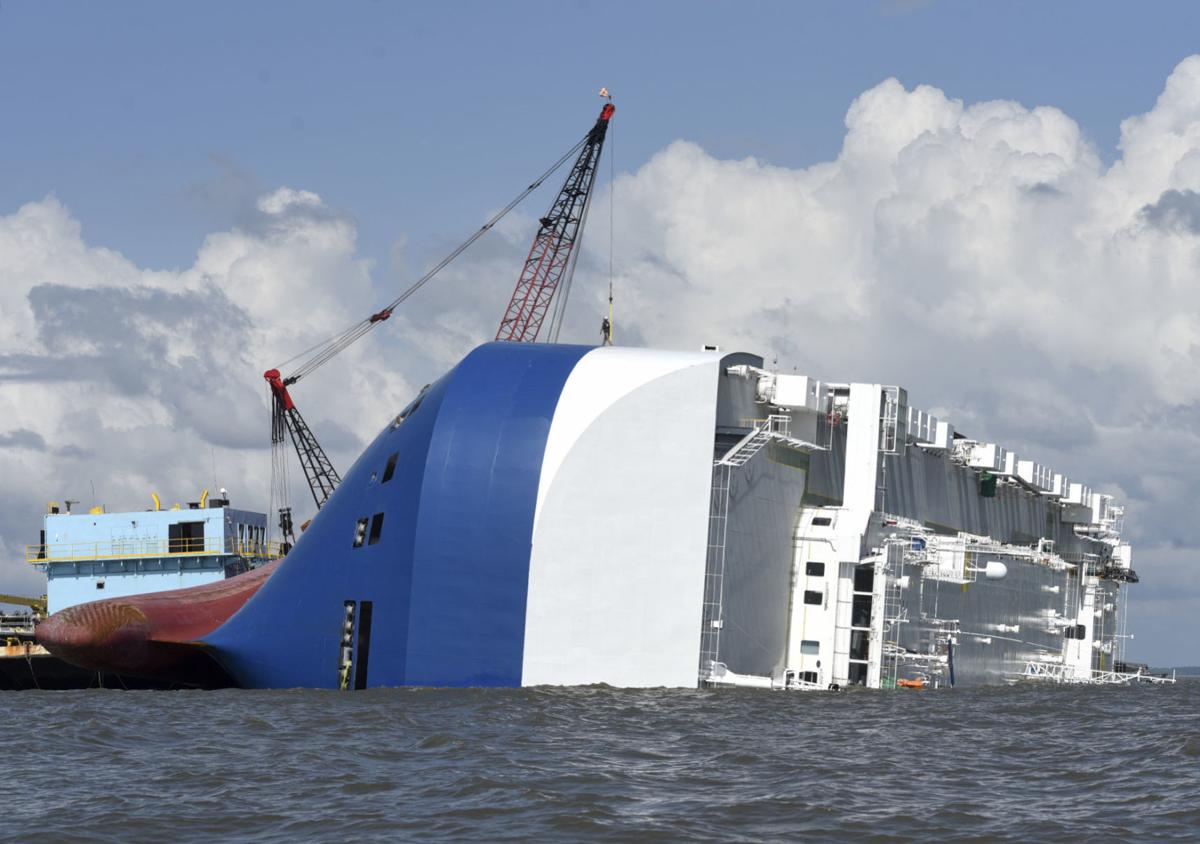 You can see it clearly these days from several vantage points along the southern coastline of St. Simons Island and up around the northern tip of Jekyll Island. It is quite visible also from the F.J. Torras, Causeway, from some vantage point along U.S. Highway 17 and, of course, from atop the Sidney Lanier Bridge.

But virtually no one saw the shipwreck of the 656-foot Golden Ray coming in the dark morning hours of Sept. 8. That is when the car carrier began having troubles as it headed out to sea from the Port of Brunswick with a cargo of 4,200 Kias and Hyundais. The 25,000-ton ship was executing a right turn around 1:30 a.m. through the St. Simons Sound when the ship’s hull began listing heavily.

The Golden Ray then rolled over onto its port side, running aground in the ocean bed of the St. Simons Sound just south of the federal shipping channel that serves the port. Those in the know said this final resting place for the Golden Ray was no accident. They credit veteran Port of Brunswick Harbor Pilot Jonathan “T.J.” Tennant with intentionally guiding the ship toward a grounding outside of the port’s vital shipping lane.

Tennant, we are told, used a personal two-way radio to call the Coast Guard for help. He also took a topsy turvy position near the ship’s askew bridge to oversee the rescue of all crew members who could be immediately reached. That included 20 Filipino and South Korean merchant mariners, all of whom who taken off the ship and transferred to Coast Guard rescue boats. (One crewman suffered a fractured leg that night and was treated at Southeast Georgia Health System’s Brunswick hospital.)

“Of course, T.J. Tennant is the true hero of this whole incident,” said Bill Dawson, General Manager of the Port of Brunswick. “He did everything he could to make the best out of a bad situation.”

Coast Guard crews also had to deal with thick smoke and flames rising up above the skyward-pointing starboard side, most likely emanating from the cargo hold.

Meanwhile, four South Korean crewmen remained trapped in the bottom of the ship’s stern, stuck in the engineering room near the propeller and shaft. The stranded crewmen used heavy tools to pound on the ship’s hull, a welcomed good sign to rescuers who eagerly answered with banging on the hull’s outside.

The dramatic rescue that ensued drew national and international media attention, from CBS and CNN to South Korean and Filipino news agencies. More than 30 hours later, the four crewmen were plucked from a small hole cut in the hull late Monday afternoon. Despite their ordeal inside the dark, sweltering ship’s hull, the men appeared to be OK after being examined at the Brunswick hospital.

With no clothes save those on their backs (much of that tattered left by the wreck), no identification, passports or money, the crew were sequestered in a nearby hotel. They soon got a first hand taste of Southern hospitality. Restaurants from Jekyll Island to the mainland to St. Simons Island chipped in to make sure the 23 men and one woman ate well daily in the two weeks before they were cleared to return home. In additional to the clothing and Bibles provided by the International Seafarers Center in Brunswick, numerous residents stepped forward with donations of clothing, food and gift cards.

“They are well taken care of,” Seafarers Center Director Vicki West said shortly afterward, tearing up with emotion. “I just want to put out a big thank you to all of this community. It’s amazing the way you all have come through.”

Meanwhile, there was still a gargantuan ship foundering in the St. Simons Sound, directly between Jekyll and St. Simons islands. Looking like some giant dystopian prop for yet another movie filmed in Georgia, the overturned behemoth drew a steady stream of curious and concerned onlookers in intent on a closer look.

Thick oil and fuel began showing up in local waters by mid September. Crews with the Altamaha Riverkeeper began documenting thick lines of black oil leaving ugly stripes through marshes grasses with the receding high tides. Altamaha Riverkeeper Executive Director Fletcher Sams invited The News on a flight over the sound, pointing out shimmering sheens of leaked fuel on the surface of the water and large blobs of floating tar.

“There are blobs oil everywhere on the south end of the St. Simons Sound, from the size of a BB to the size of a silver dollar,” Scott Owens of Southeastern Angling said back in early October. “And it’s all over the grass. (My customers) are worried about eating their catch.”

Then, on Sept. 27 and again Sept. 30, the Golden Ray began hemorrhaging thick oil through vents that were intended to sit vertical in a floating vessel instead of lay sideways on a capsized ship. Some 25 miles of inland shoreline was oiled by leaks from the Golden Ray, going as far back as Blythe Island and particularly the southern shore of the Brunswick River.

Unified Command’s Shoreline, Cleanup and Assessment Team (SCAT) combatted the pollution with 70 boats and hundreds of workers. They employed absorbent and surface barrier booms, surface oil siphoning boats and a natural sphagnum moss spray to absorb oil stuck to marsh grasses. The SCAT teams focused heavily on Quarantine, Bird and Lanier islands and the entrances to the Frederica, Back and MacKay rivers.

There have been no significant leaks since late September Unified Command officials said.

“Anytime you’ve got a release of this nature, there’s always concern,” said Doug Haymans, Director of the Coastal Resources for the Georgia Department of Natural Resources.

All the while, still more Unified Command crews were rappelling into the topsy-turvy confines of the ship to get at more than 300,000 gallons of oil contained in the Golden Ray’s 26 fuel tanks. Using a process know as lightering, the oil was pumped from tanks inside the Golden Ray onto container barges below — a precarious process for those working inside an overturned ship that is half submerged in water and has floors where walls should be and vice-a-versa. Crews started the Lightering of oil in late September the effort was declared completed Dec. 12, after removing 320,000 gallons of oil.

The swift twice daily shift in high and low tides also put a strain on the vessel, causing scouring and erosion of the sand beneath. The ship had listed from 90 degree to a 100 degree angle, Unified Command personnel reported. In response, Unified Command brought in 6,000 tons worth of aggregate rocks to drop around the ship’s hull in late October, a move that brought measured stability to the foundering shipwreck.

Adding further stability to the ship’s compromised hull, the Unified Command cut away the ship’s rudder and propeller by use of a propylene torches earlier this month. That estimated 130 tons of steel thus removed is expected to take some stress off the hull as it lies in this unnatural position, exposed to swift daily currents.

Unified Command, by the way, consists of the U.S. Coast Guard, the Georgia Department of Natural Resources and Gallagher Marine Systems. All of the command’s action are based on guidelines set forth in the Oil Pollution Act of 1990, a congressional act spurred by the massive Exxon Valdez oil spill the year before.

Unified Command’s lans are still in progress for the actual removal of the ship. As early as Oct. 14, Unified Command conceded that salvage of the Golden Ray was not possible. It was a total loss, and their efforts went from salvaging the ship in one piece to chopping it up and getting it out of here.

As 2019 draws to a close, Unified Command is still working out the finer points of its plan to do just that. Officials have given us some idea of what this may look like. They are presently seeking bids for an environmental wall which would be built around the ship to prevent further pollution when the cutting starts. Such a wall likely will resemble a coffer dam, constructed of huge fitted and fastened sheets of corrugated steel.

That cutting will likely employ a giant cable saw with carbide steel teeth, attached to powerful winches aboard anchored barges on either side of the Golden Ray. Churning back in forth, from the bottom up, the saw would cut the Golden Ray up into slices. These would be hoisted onto barges and hauled away.

Whatever the plan, it is a good bet that the shipwreck of the Golden Ray will occupy a prominent place in the Golden Isles’ vista for much or all of the coming year.

“I wish we could just lay out the roadmap from here to the finish,” Coast Guard Commander Norm Witt said back in late November. “Unfortunately, I think we’re still developing the road map.”