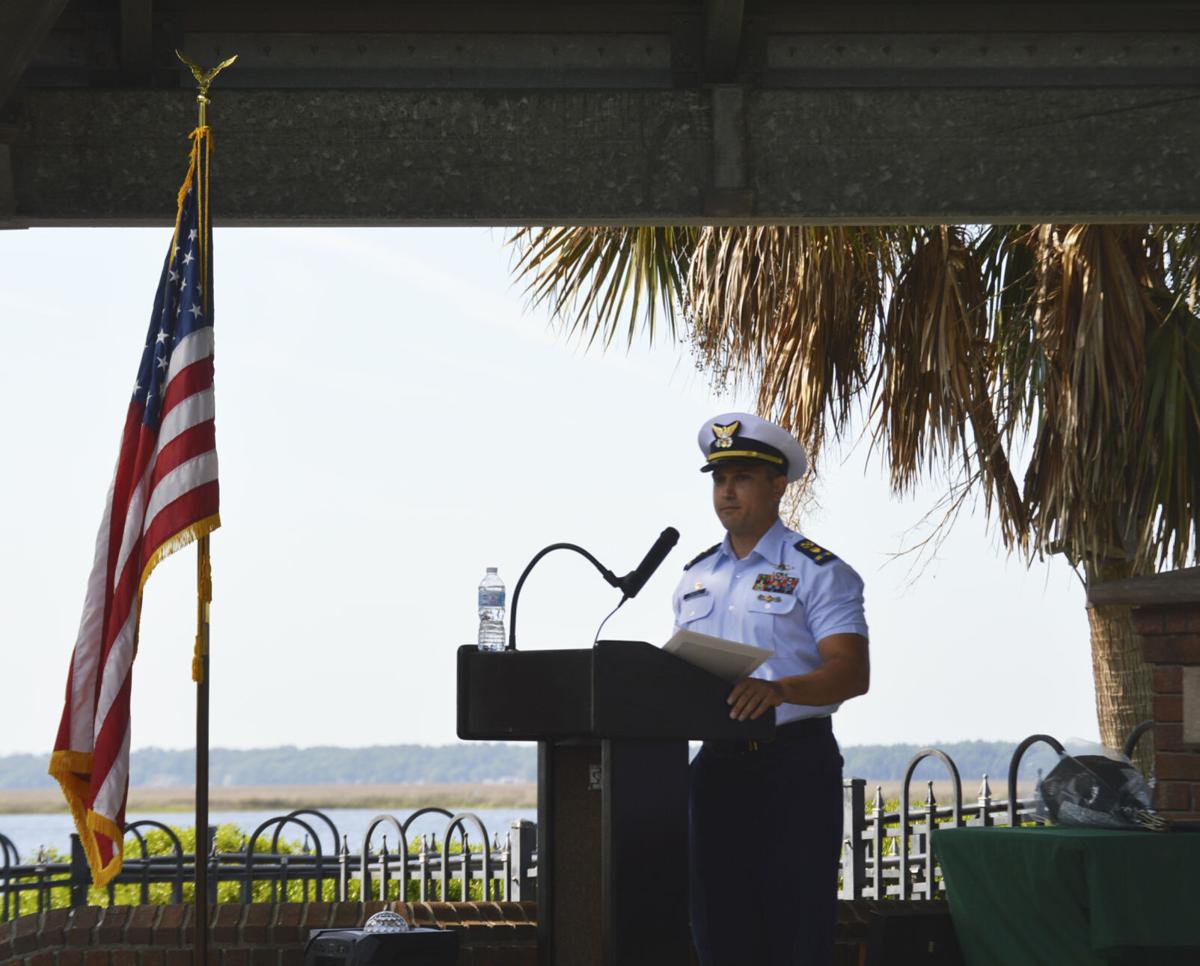 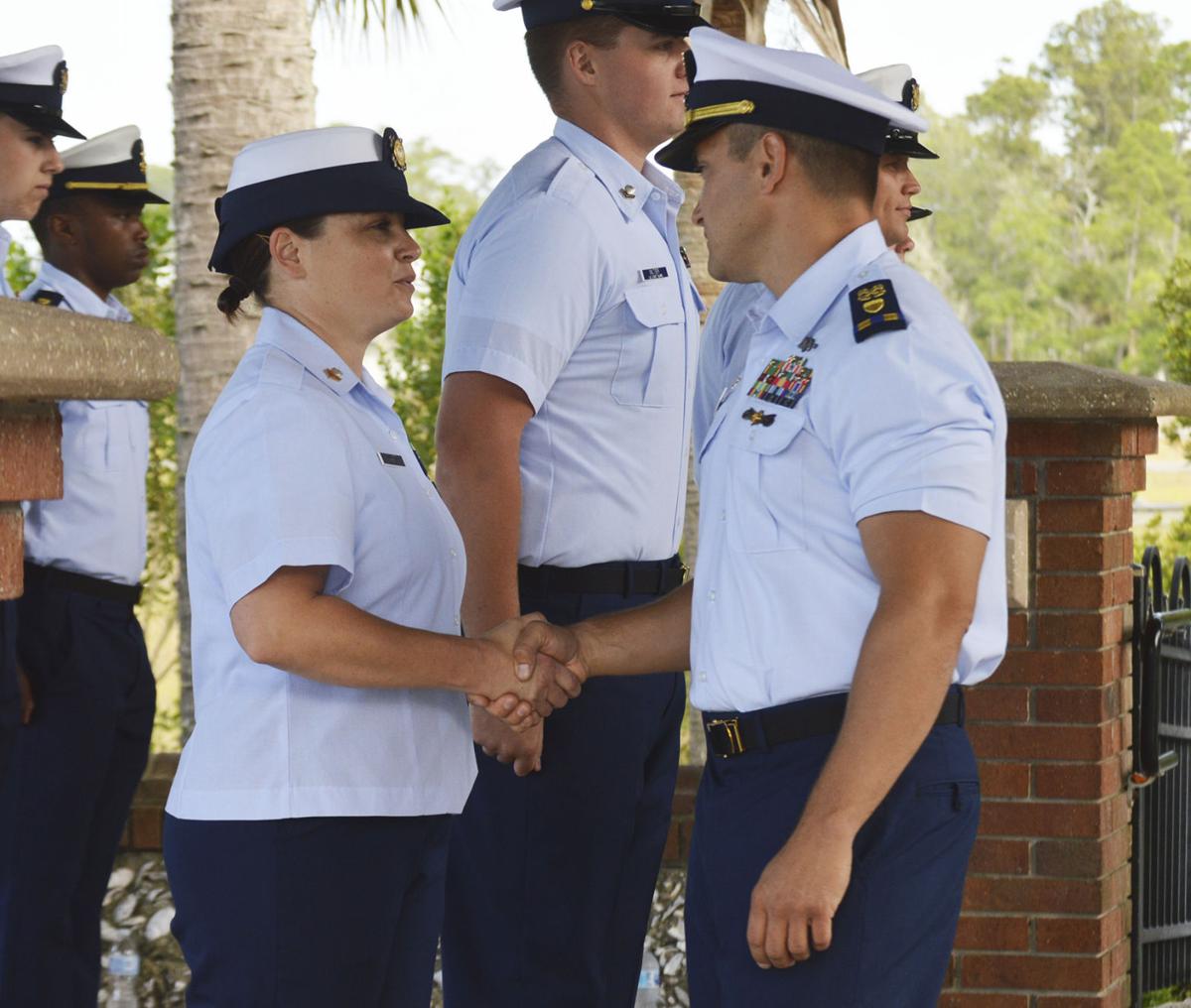 Chief Warrant Officer Brook Blount, the new commanding officer of the USCGC Sea Dragon, shakes the hand of a crew member during a ceremony Wednesday where he took command of the ship.

Chief Warrant Officer Brook Blount, the new commanding officer of the USCGC Sea Dragon, shakes the hand of a crew member during a ceremony Wednesday where he took command of the ship.

Brook Blount’s family didn’t have to travel far to watch him assume command of the USCGC Sea Dragon in a ceremony Wednesday in St. Marys.

The 2002 Camden County High School graduate has returned to his hometown where he will serve the next two years as commanding officer of the Coast Guard cutter based at Naval Submarine Base Kings Bay.

The Sea Dragon is one of two cutters, along with 12 surface craft in a 150-person unit, that provide security for the ballistic and guided missile submarines departing from and returning to the Navy base.

Blount enlisted in the Coast Guard in 2005 with the intent of making it a career. One of his goals when he joined was to command a cutter, but he realized it was unlikely that would happen in his home town.

At the time he enlisted, the only Coast Guard unit in St. Marys was the Maritime Safety Security Team. The team, one of 14 established after the 911 terrorist attacks in 2001, provides security along coastal areas and it has no cutter.

The Sea Dragon was commissioned in 2008 and was the first Coast Guard cutter assigned to provide security for ballistic missile submarines.

Once cutters were assigned to Kings Bay, Blount realized he could be one of the few people serving in the Coast Guard to command a vessel in his hometown.

“Did I imagine it? Absolutely,” he said. “I loved being here on the water.”

During Wednesday’s change of command ceremony, Blount gave a personal inspection of his new crew after his predecessor, Chief Warrant Officer Kristian Sova, said goodby to his old shipmates.

Commander Christopher Culpepper, commander of Maritime Force Protection Unit, Kings Bay, was the keynote speaker at the ceremony, in what he described as a “time-honored tradition.”

He said it was rare and “could be unique” for someone to take command of a Coast Guard cutter in his or her hometown.

“There is a local hometown hero coming back to roost,” he said.

Culpepper said the public doesn’t realize the risks in the “high consequence missions” taken each day to protect a national security asset such as the submarines at Kings Bay.

Culpepper praised Sova for his performance as captain of the Sea Dragon during the 55 missions he commanded.

“I think he’s checked all the boxes,” Culpepper said.

Sova said he met Blount several years ago after he assumed command of the Sea Dragon. He learned Blount once lived a few doors down from where he just moved into. He said the meeting prompted an unusual thought, or perhaps a premonition.

“How funny would it be if he came here to relieve me?” he said.

Sova thanked the Sea Dragon crew for the effort they made performing their mission during difficult times.

“We never missed a mission because of the pandemic,” he said. “I am proud to have served beside you as your commanding officer.”

Sova got emotional as he thanked his family for their support.

The two men then read their orders and saluted one another.

Blount said he and his wife, the former Dani Seymour of St. Simons Island, joked about returning to Southeast Georgia during the first winter at his last duty station in Maine. He said they look forward to the Georgia heat.

“It is an honor and privilege to be in my hometown,” he said.

This isn’t the first time Blount has served in the region. In March 2006 he reported to the MSST unit in St. Marys as a boatswain’s mate, where he earned his tactical coxswain and boarding officer certifications. He deployed to different locations across the country conducting missions.

After a tour of duty aboard the USCGC Bluefin, Blount returned to the MSST unit in St. Marys where he was certified as a deployable team leader. He led ports, waterways and coastal security missions across the nation.

In 2014, he volunteered to go to Saudi Arabia, where he developed curriculum for the nation’s newly created Maritime Infrastructure Protection Force.

In 2017, he served in Brunswick as executive petty officer, where he supervised and led a unit of 40 men and women responsible for conducting search and rescue and law enforcement missions along Georgia’s coastline.

He earned his commission to chief warrant officer after tours of duty as officer in charge of CGC Amberjack and CGC Finback.