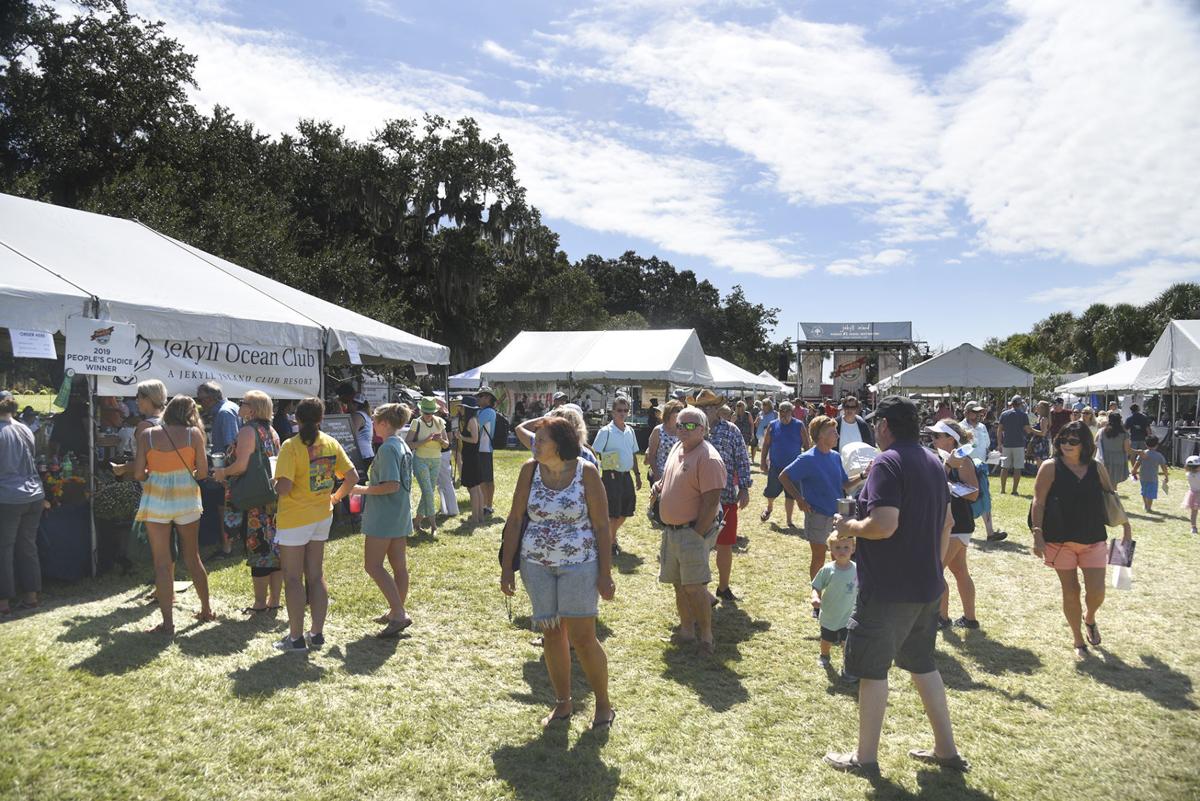 A large crowd lines the tents at the 2019 Shrimp & Grits Festival to sample the many versions of shrimp and grits offered from the various vendors. 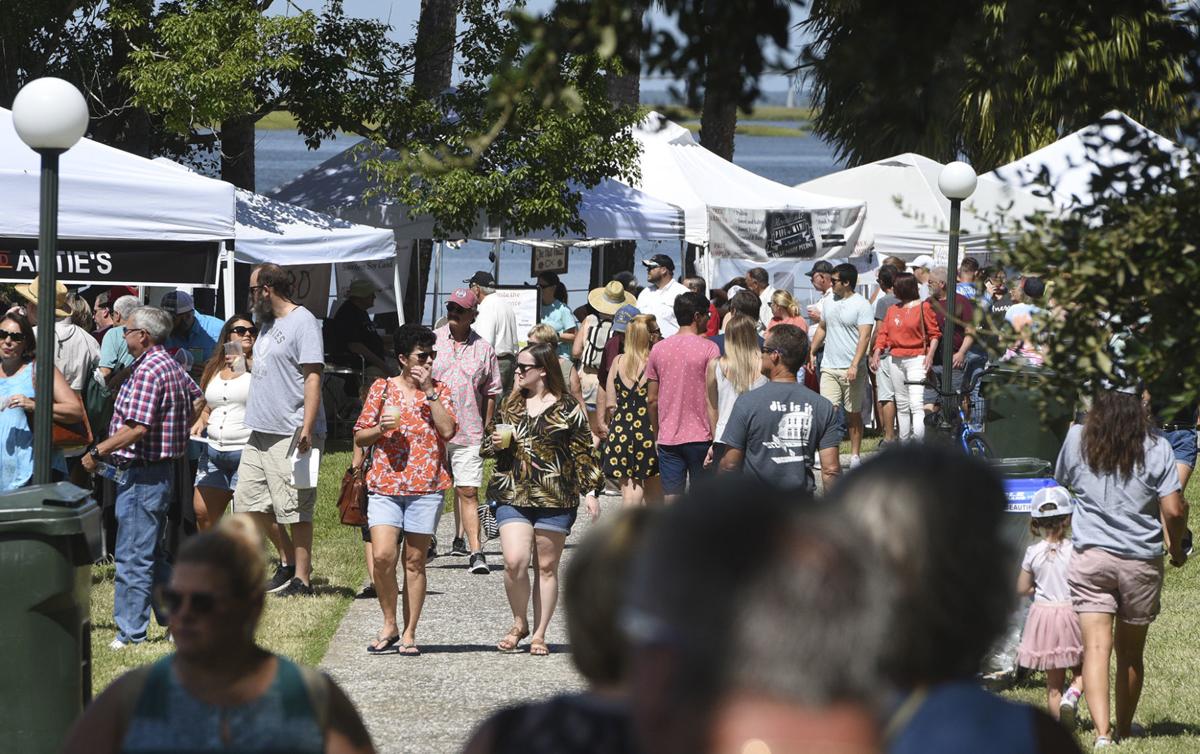 A large crowd walks the sidewalk in the Georgia Grown Alley Sunday.

A large crowd lines the tents at the 2019 Shrimp & Grits Festival to sample the many versions of shrimp and grits offered from the various vendors.

A large crowd walks the sidewalk in the Georgia Grown Alley Sunday.

The event attracts thousands to the island annually, but the decision to cancel was made in the interest of public health and safety in light of the COVID-19 pandemic.

The decision was based on other factors as well, including budgetary concerns and the uncertainty surrounding public events in the future.

“Canceling this year’s festival was not an easy decision to make, but ultimately we, the JIA, felt it was in the best interest of both participants and those who work so hard to bring the festival to life,” said Jones Hooks, executive director of the JIA. “It’s imperative to us that we provide an environment that our visitors feel comfortable and safe in. And right now, even with social distancing, large-scale events are not recommended.”

Hooks shared the news Tuesday during a JIA board meeting. Several months of planning have been lost because of the pandemic, which shuttered businesses on Jekyll for part of the spring season and led to furloughs for many JIA employees.

“It’s a significant recommendation, but I think it’s very important that we not assume 100 percent of the financial and associated risks with a Shrimp & Grits Festival,” Hooks told the board.

The festival, which brings more than 45,000 people to Jekyll Island over a three-day weekend, was set to mark its 15th anniversary this year.

Hooks listed challenges that led to the cancellation.

“A lot of people don’t realize, but Shrimp & Grits is not a moneymaker for the authority,” he said. “It is an activity that we undertake in order to promote Jekyll Island and awareness of the island.”

The Jekyll Island Club Resort, a close partner during the event, needs to use the time normally dedicated to the festival to make up for the loss of guests during the pandemic, Hooks said.

“We have had conversations with the Club Hotel because...they are very significant in the Shrimp & Grits equation because it’s utilizing much of their grounds, and they are trying to fill those dates with dates that were canceled in the spring,” he said.

Planning for the festival takes almost an entire year. Many sponsors have already indicated they will not be able to participate this year, Hooks said, including one of its biggest sponsors, Georgia Grown.

JIA also anticipated that many restaurants, which play a significant role in the event through cooking demonstrations and competitions, will not be able to participate due to the hardships experienced by the industry.

“We have many sponsors, vendors and artisans who support the festival’s success and were in planning phases now, and we couldn’t put them at risk of incurring financial losses if the festival had to be canceled later in the year,” Hooks said. “We also spent many weeks discussing options with these partners, and many felt too uneasy about how the fall might look for events and whether they would be able to participate. We value their partnerships, and we couldn’t confidently move forward given all of the circumstances.”

The Fourth of July fireworks have also been canceled. But Hooks emphasized that Jekyll is not closing up shop for the year.

Many activities, programs, projects and events are continuing. They include the completion of a golf master plan, expansion of the Georgia Sea Turtle Center, the Holly Jolly Season activities planned for the end of the year and a total revamp of the website.

Artists and vendors who applied to participate in the festival will receive refunds or provided the option to transfer applications to the 2021 festival.

The island, a self-sustaining state park, generates its revenues from parking fees as well as island hotels and amenities, many of which were closed from mid-March through early June due to the pandemic. Jekyll experienced too much of a decline in this revenue to risk additional expenditures on festivals and events, officials indicated.

“To ensure island management is properly sustained, we too have to focus our efforts on rebuilding lost revenue and not overspending,” Hooks said. “We want to ensure the funds we have are not only helping our businesses return to normal, but are also focused on returning our workforce, some of whom have been furloughed, to full capacity.”

“We look forward to welcoming our visitors back November of 2021 to the festival everyone knows and loves, and being in a place where we can provide the elevated experience that has set our event apart in the Southeast for so many years,” Hooks said.

During the authority board meeting, held in a digital format, the finance committee reviewed Jekyll’s financial report for May. Revenues were down 41 percent from the budget, for a total loss of $122,000.

May’s financial report was less dire than those of the past couple of months due to an increase in visitors and the reopening of many businesses and hotels.

The board also reviewed plans for the fiscal year 2021-22 budget. JIA staff reduced revenues and expenses to create a $27.5 million budget, down about $3 million from what was originally planned.

The board approved several items, including a $1,000 CARES Act grant that will go toward the Jekyll airport, a $4,300 purchase to replace a fire department truck radio, a new loss prevention policy for employees and a revised construction timeframe for the Moorings at Jekyll Harbor.