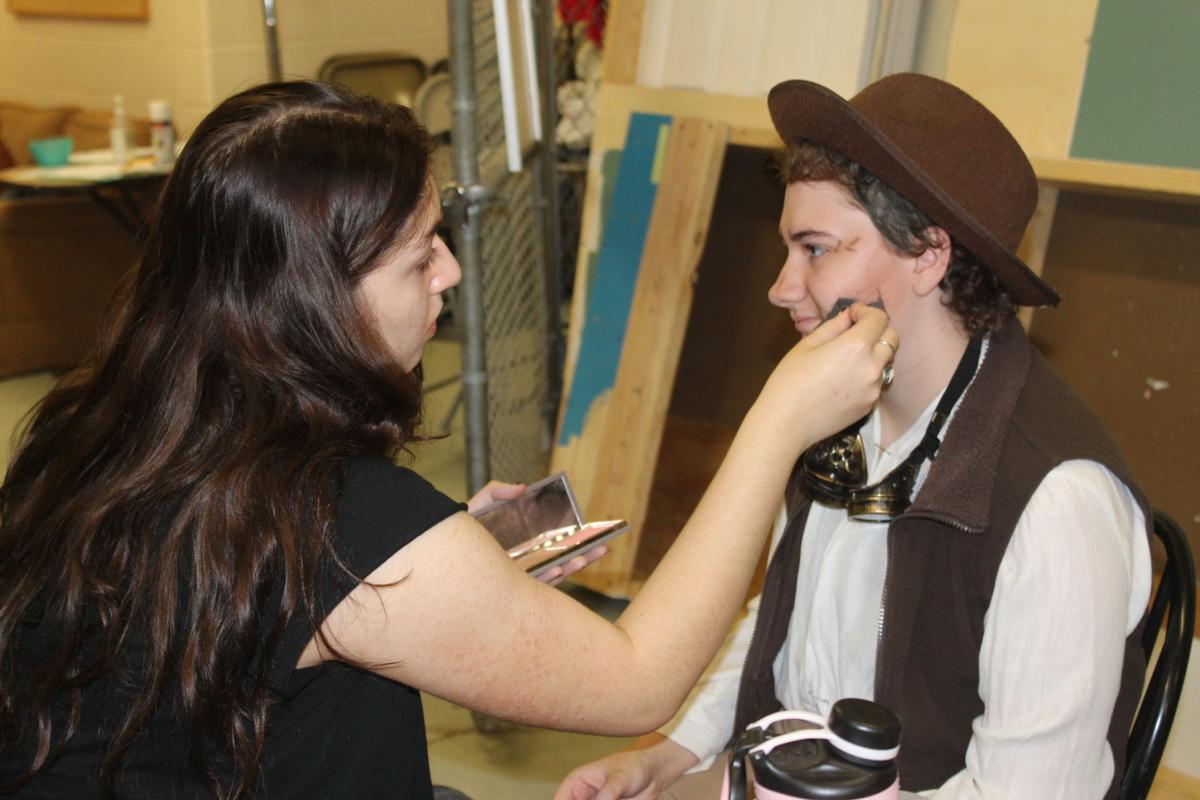 Lili Seamann, left, applies makeup to Alister Moore backstage before a dress rehearsal for ‘Beauty and the Beast Jr.’ Lili is playing one of two Belles and Alister is portraying Maurice. 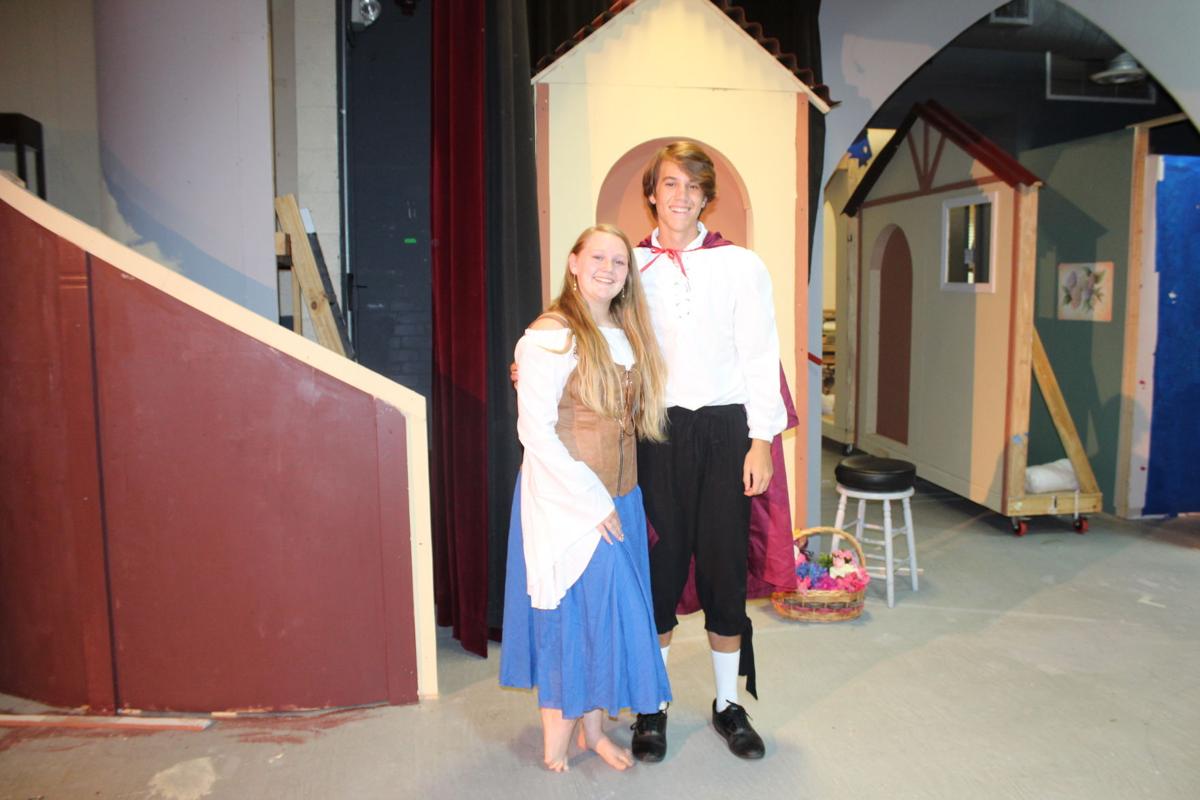 Sophia Willis, Belle for one cast, left, and Josiah Nichols, who plays the Beast for one cast, stand on the stage under construction for the production.

Lili Seamann, left, applies makeup to Alister Moore backstage before a dress rehearsal for ‘Beauty and the Beast Jr.’ Lili is playing one of two Belles and Alister is portraying Maurice.

Sophia Willis, Belle for one cast, left, and Josiah Nichols, who plays the Beast for one cast, stand on the stage under construction for the production.

Lili Seaman dabbed the makeup sponge into the tub. Carefully, she applied the brown cream to Alister Moore’s face.

“He’s playing Maurice, so we have to make him look older,” Lili said with a grin.

As the transformation unfolded, a flurry of activity swirled around them. Children of all ages whizzed through the backstage space of the St. Simons Casino. Some were clad in capes and leather boots, others in long dresses embellished with sparkles.

Lori Willis smiled at the exuberant chaos, while also fielding a variety of questions from the young thespians. As the director of this year’s Island Player’s Young People’s Workshop, she has been at the helm as they’ve worked tirelessly to prepare for their production, “Beauty and the Beast Jr.”

“This is my first time directing, but I actually got my start with the Young People’s Summer Workshop when I was 8 years old. And I had the same director who just retired last year,” she said of the program, which began in 1975.

“I remember I was scared to death. But I loved to sing and dance. I ended up doing three shows then going to focus more on dance. I came back to it in my 20s.”

She’s been involved with the Island Players in one way or another since. And she’s passed her love of theatre on to her daughter, Sophia, who along with Lili, is portraying Belle for the two cast show.

Both Sophia, Lili and fellow long-time participant, Josh Henson, have all performed for at least 10 years. They’ve also been awarded scholarships for their dedication. As they reflect on their final Young People’s Workshop, they find a shared sense of gratitude for the opportunities the program presents. It’s offered them a creative home for them to express themselves while helping them to grow.

“I really like the environment ... like back here,” Sophia said, gesturing to the backstage space. “I just like being around everybody. It gives me something to do too instead of staying home everyday. I love spending my whole summer here.”

Josh, who plays the Beast for one of the casts, nodded in agreement.

“Yeah when we didn’t have the show last year, I felt very empty,” he added.

“Exactly,” Sophia echoed. “You didn’t know what you were doing.”

While staging the production takes a ton of work for the 60-plus participants, it does add a sense of structure to their summer break, something these kids crave. They also relish the story telling. That, they add, is particularly true of this story.

“Belle is the kind of princess that I would want little girls to come out to see. If we were doing Cinderella or Sleeping Beauty, those princess are beautiful and they get saved by a wonderful prince. But Belle saves herself and she saves her father,” Lili offered.

“Absolutely. I love that Belle can stand up for herself,” Sophia added.

Of course, the story — as the song muses — is “one as old as time.” It’s certainly as old as 1991, when the Disney version hit theaters. Many audience members will nostalgically recall the tunes made famous by the animated film.

“The music is just great. Everyone knows the songs. I think that will connect with people and help them get really into the show,” Josh said.

Like the actors, Trevor Williams is also looking forward to seeing the audience respond. A longtime participant, these days he is a student at the University of Georgia, but he came home to participate in the program once again.

“This time, he’s my co-director,” Willis said with a smile. “He’s done a great job.”

It’s been a rewarding role for Williams as well.

“I’ve been doing this for 10 years but with the co-directing it’s very different in that you have to help manage people. It’s a more of teaching role,” he said. “But it’s been great to experience this side and to watch the actors grow.”

The show began its run last night and the will rise on Beauty and the Beast Jr. at 7:30 p.m. this evening — with shows at the same time Friday and Saturday.

Tickets are $10 each with a purchase of six or more. For details, visit theislandplayers.com.