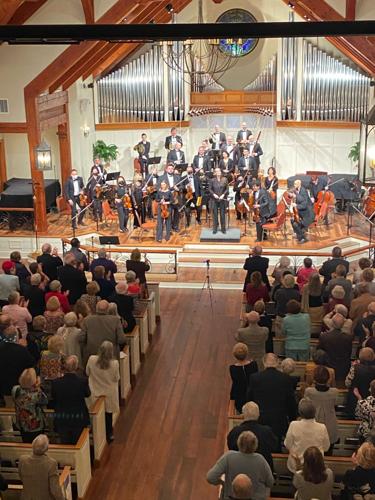 The Coastal Symphony of Georgia’s first show of the year, the second of the 2021-2022 season, will kick off at 8 p.m. on Jan. 24 in Wesley United Methodist Church on St. Simons Island. Tickets are still on sale at coastalsymphonyofgeorgia.org. 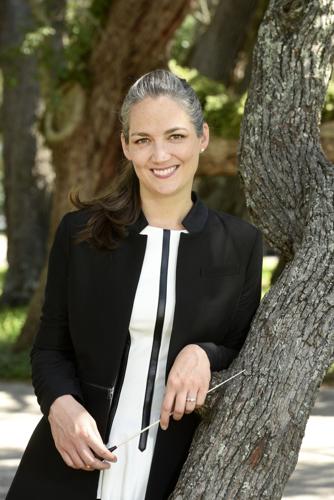 Michelle Merrill, conductor and music director of the Coastal Symphony of Georgia, is pictured.

The Coastal Symphony of Georgia’s first show of the year, the second of the 2021-2022 season, will kick off at 8 p.m. on Jan. 24 in Wesley United Methodist Church on St. Simons Island. Tickets are still on sale at coastalsymphonyofgeorgia.org.

Michelle Merrill, conductor and music director of the Coastal Symphony of Georgia, is pictured.

The Coastal Symphony of Georgia’s first show of 2022 is set to be a special one.

Set for Jan. 24, it’s a smaller affair featuring around half the musicians of the 60-or-so-person orchestra’s normal complement. That’s mostly due to COVID-19 procedures, which is also the reason the performance will take place at Wesley United Methodist Church on St. Simons Island.

“(Wesley’s sanctuary) gives you a whole different feel and sound, and of course, Wesley is such an amazing place to have a concert. These shows concentrate of string and woodwinds, and it fills that space,” said Susan Garrett, the symphony’s marketing chair. “The word ‘intimate’ is good. At Wesley, everyone feels much closer to the musicians and gets really engaged with them.”

As opposed to the full, booming sound of a full orchestra, this performance will be lighter — in Garrett’s words, “happy, upbeat and enchanting.”

The CSG’s conductor and music director, Michelle Merrill, said the smaller crew actually opens doors for the symphony rather than limiting it.

“Though we are still using a full symphony orchestra for this show, it is more of what you might call a ‘chamber’ orchestra,” Merrill explained. “The beauty of that is there is so much repertoire for that size that we sometimes skip over in favor of the large ensemble pieces. And we also are getting to perform in this beautiful new space this season, which has been a treat both acoustically and visually.”

This show will be smaller in size but also shorter in duration, coming in at under two hours. But Garrett said that just gives the musicians an easier time focusing on the four arrangements they will perform, which are the “Barber of Seville Overture” arranged by Gioachino Rossini, “Concerto Provencal” by Reynaldo Hahn, “Amazing Grace” by Jennifer Higdon and “Serenade for Strings Op. 6” by Josef Suk.

Garrett said she felt symphony fans in the Golden Isles would particularly appreciate this particular take on the hymnbook staple.

“Jennifer Higdon has put her own composure together in a special way,” Garrett said.

The melody continues from start to finish without pause, she said, and it pulls the listener along with it. While it’s recognizable this “Amazing Grace.” this performance also comes with a character all of its own.

Merrill added that one might be surprised to learn most of the rehearsals for the symphony’s shows happen individually. Musicians receive their parts a month in advance, but full group rehearsals don’t usually happen until the weekend before an event.

“I think this is what shocks people the most,” she said. “But you must know that everyone shows up already knowing their part, and the rehearsals are more about making those parts a whole, and my job as conductor is to guide the interpretation of the individual pieces and shape them as I think the composer would have wanted.”

While Garrett had plenty to say about the symphony and pieces planned for the Jan. 24 show, she spared no praise for Merrill herself.

“She likes to mix things up, presenting classics from the old masters and pieces from new, up-and-coming composers,” Garrett said.

What’s become an illustrious career started with piano lessons at the age of 7 or 8, said Merrill, followed by saxophone lessons in middle school. She didn’t discover a passion for conducting until high school when she joined the school marching band. A few instancing of taking over the class while the teachers were away led her down the path to where she is now, Merrill said.

“My first year with the CSG started with the 2018-19 season, so I’m shocked to say it’s already my fourth season here with the orchestra,” Merrill said, adding that “Time flies.”

“I hope you join us! It is a fantastic orchestra in a beautiful space, and a perfect way to escape into a world full of emotion captured in sound,” Merrill said.

Tickets are still on sale for the January show at coastalsymphonyofgeorgia.org or at the box office, which can be reached at 912-634-2006.

A group of investment partners has purchased most of Redfern Village.

“Wake up and work hard” has become Isabelle Zantow’s favorite mantra as she prepares for an upcoming, life-changing experience.

A group of about 60 people gathered outside the Glynn County Courthouse on Saturday evening to protest the Supreme Court’s ruling Friday that overturned Roe v. Wade, which protected abortion rights at a federal level.

Oh say, can you spa!

We all strive to look and feel our best. Diet and exercise are at the foundation for staying fit, but some areas are stubborn – like that belly pooch, the dun lap, or upper arms. Now you have the freedom to get body sculpting procedures done in an office setting! Dr. Diane Bowen, at Golden I…

This summer, Berlyn Richardson from Brunswick will join elementary school students from acro…