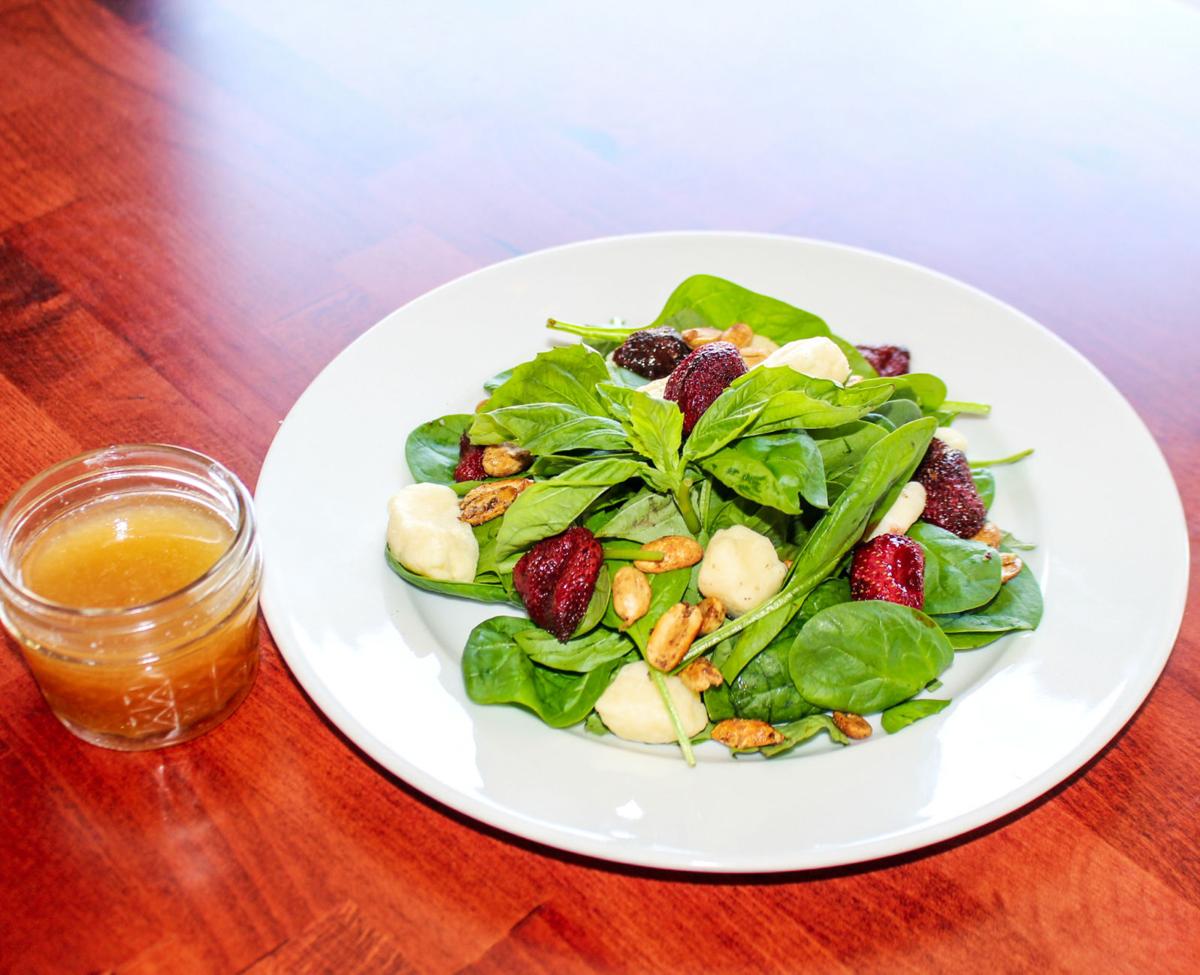 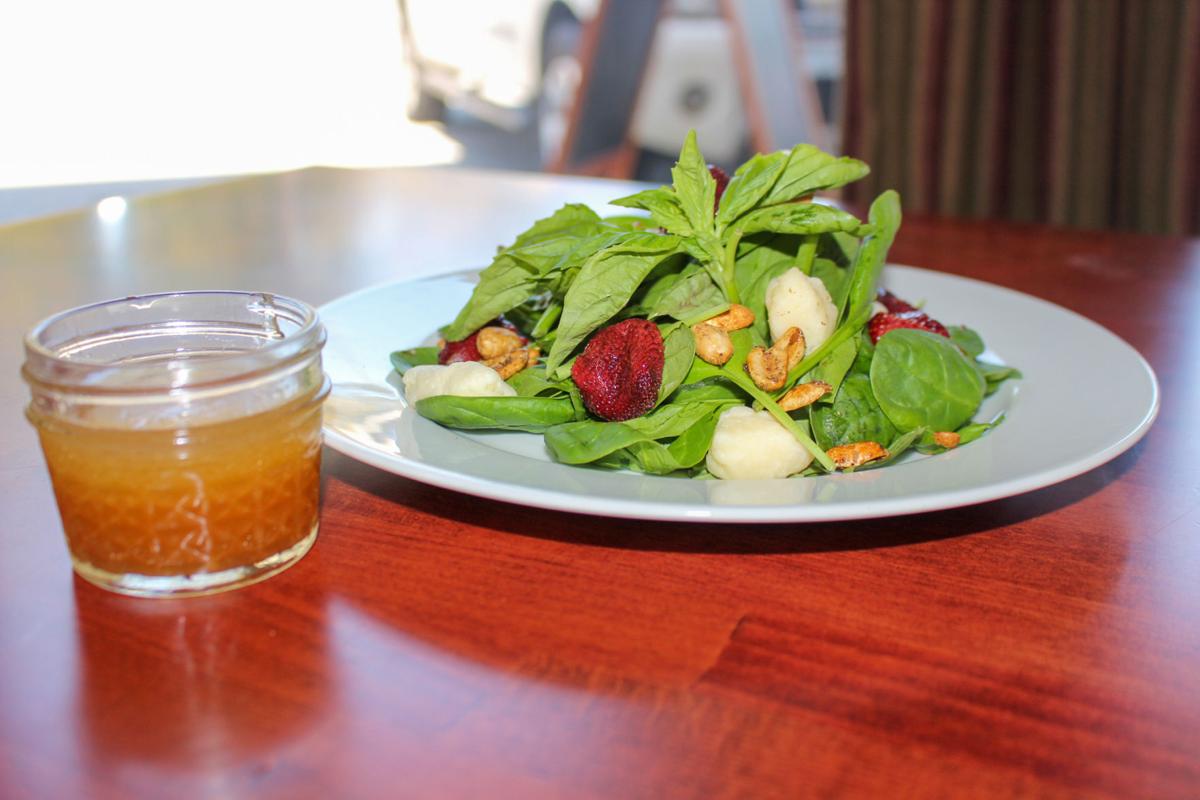 It’s officially full-blown spring here in the Golden Isles. The spring breakers are here, and so is the pollen. However, what’s also here is fresh produce that makes for healthy yet delicious salads.

Bistro Eleven88 owner David Ouimet put together a spinach-based salad with roasted strawberries, spiced peanuts, cheese curds and a cane syrup vinaigrette as a fresh recipe to try this spring.

Ouimet, whose restaurant is located at 1188 Chapel Crossing Road in Brunswick, said this time of year is a great time to take advantage of that fresh produce.

“This time of year, everything’s starting to grow, and a lot of our local farmers have been starting things off in the hothouses and transferring them to the ground,” Ouimet said.

“Now that we’ve got longer daylight hours, things are popping and growing better. So we’re getting nice fresh produce — lettuces, peas and all sorts of good things. So it just makes some nice, fresh, healthy salads a lot easier.”

Ouimet likes to create his spring salads with seasonal items, so the flavors burst with each bite.

“I like to work with what’s fresh and seasonal,” Ouimet said. “We’re getting good strawberries out of Florida right now. Over the summer, I put up peaches. So I usually have peaches year-round or just whatever local fresh.”

The Golden Isles has farmers’ markets with a lot of these fruits and vegetables, which Ouimet said is where he likes to get his produce.

“Farmers’ markets are great. We’ve got some here in Brunswick,” Ouimet said. “I like to go as local as possible that way you know where it’s coming from, and what the thought processes are of when they’re growing it — as chemical free as possible, especially on leafy things that don’t have a rind. Yeah, I don’t want chemicals sprayed on there because not all of it is going to wash off — it’s going to be in the actual plant, and you don’t want that.”

It’s all about being in season for Ouimet, but he also said it could waver for this recipe.

“I just like to use them in season, so they’re fresh, but when you roast, if you have some that are less than ripe, it’ll concentrate the flavors so you really can’t go wrong,” Ouimet said.

He also likes to add a crunch to his salads to give an extra texture.

“I got the garam masala roasted peanuts, so a nice little ethnic flair to it,” Ouimet said. “I like to have a little crunch on all the salads, whether it’s a crouton, a crisp or a nut.”

For the dressings, Ouimet said depending on the ingredients, he’ll either use a complementary or contrasting vinaigrette style dressing. For this one, he chose the cane syrup that seems to complement the strawberry well.

“I like the cane syrup. It’s got a good earthiness to it,” Ouimet said. “It’s not overly sweet so it plays nice with the depth of the strawberries, the basil and spinach.”

This salad can be a great lunch or dinner option that is both light and healthy.

As the heat is coming, these salads are ideal. They won’t make you feel too full, but they’re also a nutritious meal.

For the roasted strawberries:

Combine and roast on foil-lined sheet pan at 375 F for 20-30 minutes. Strain and save the liquid to the refrigerator (it’s delicious over vanilla bean ice cream).

For the spiced peanuts:

Directions for the peanuts: Melt 1 tablespoon of butter in a sauté pan over moderate heat. Add one cup roasted peanuts and sauté until browned. Add 1 teaspoon Garam Masala and a pinch of salt and toss to coat. Cool to room temperature.

Directions for the vinaigrette: Whisk all vinaigrette ingredients together in a bowl or combine in a mason jar and shake vigorously.

Store leftover dressing in the refrigerator. Toss all salad ingredients together and dress with vinaigrette.