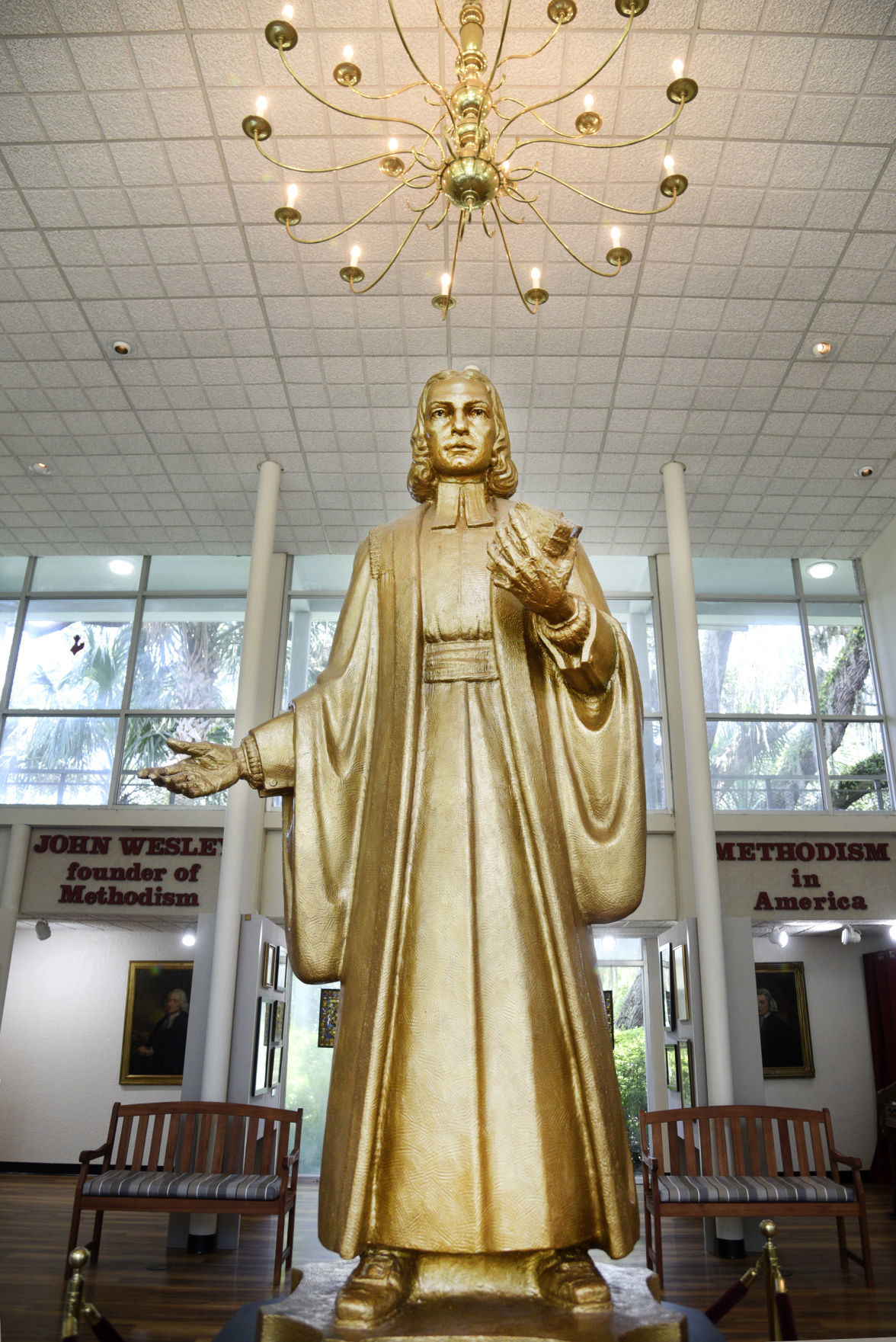 A statue of the Rev. John Wesley, the founder of Methodism, is pictured at the Arthur J. Moore Museum at Epworth By the Sea on St. Simons Island. 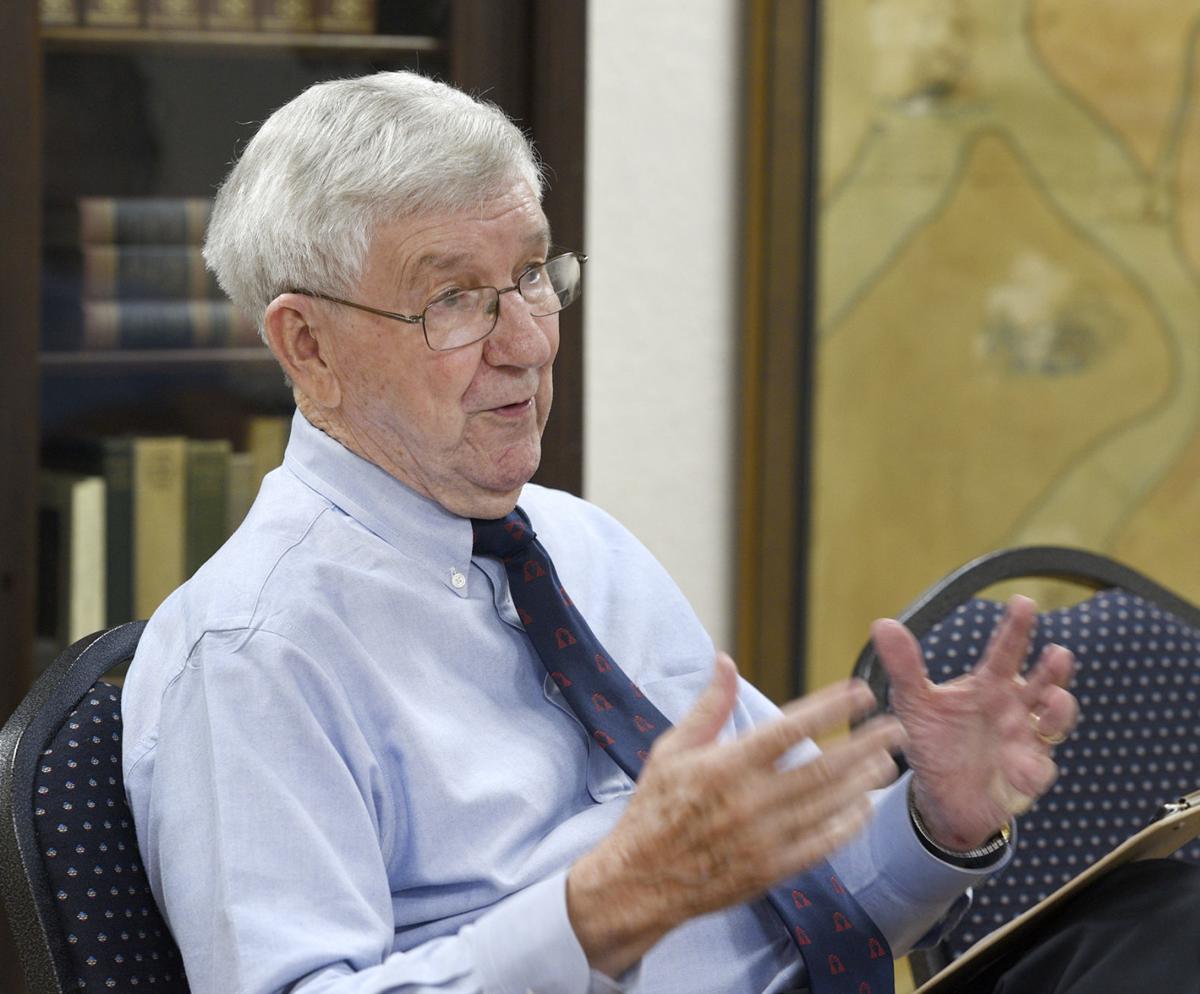 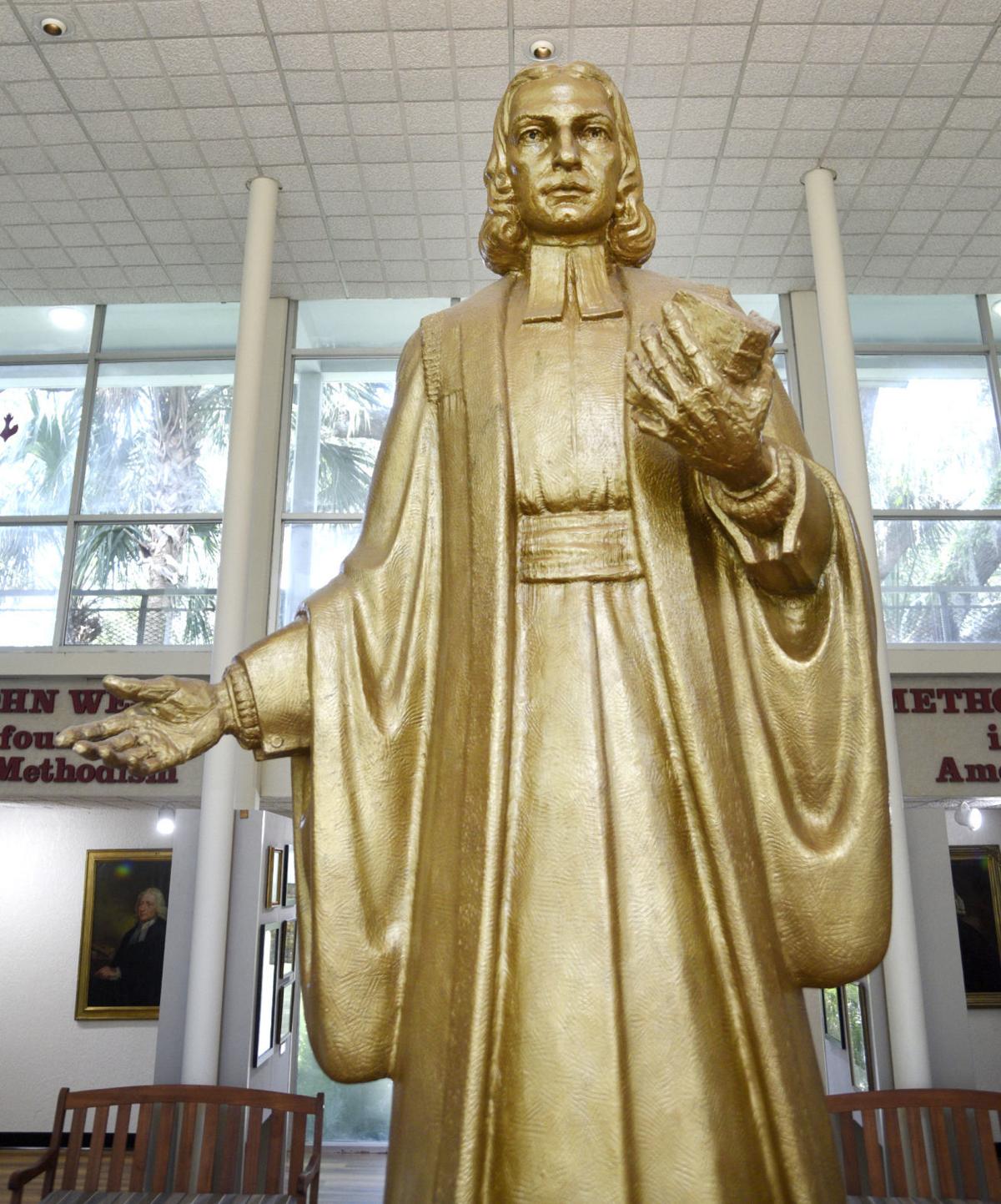 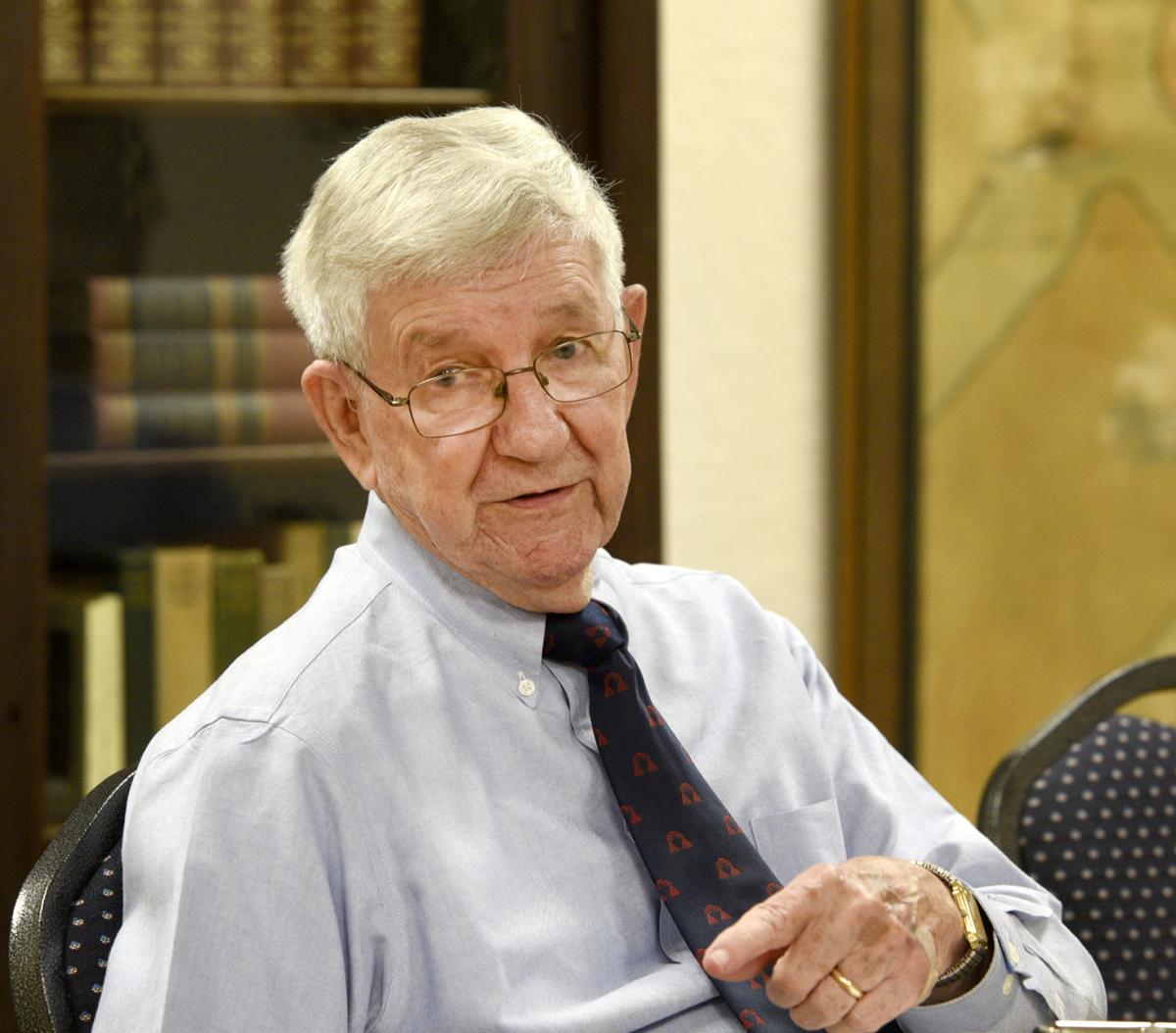 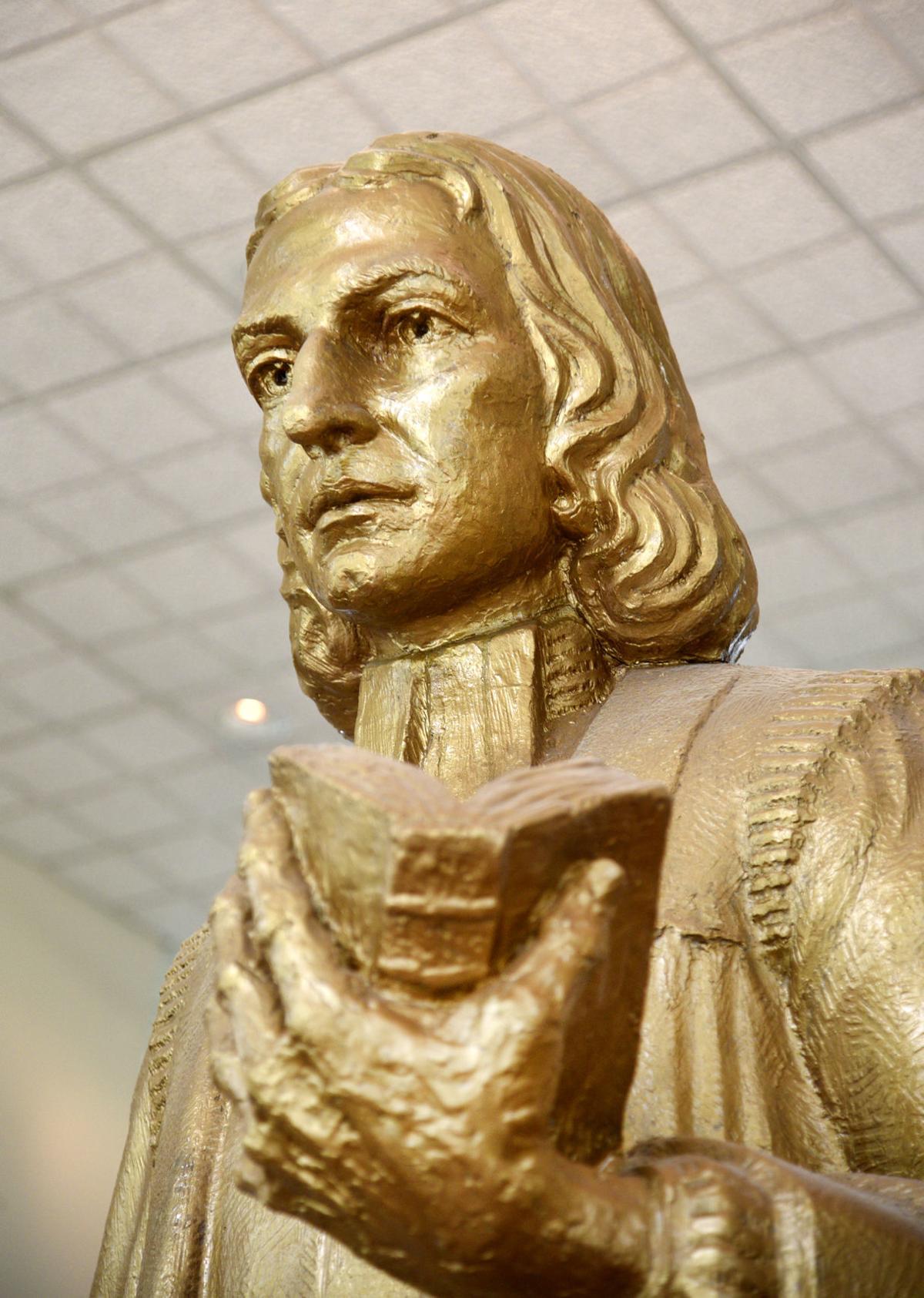 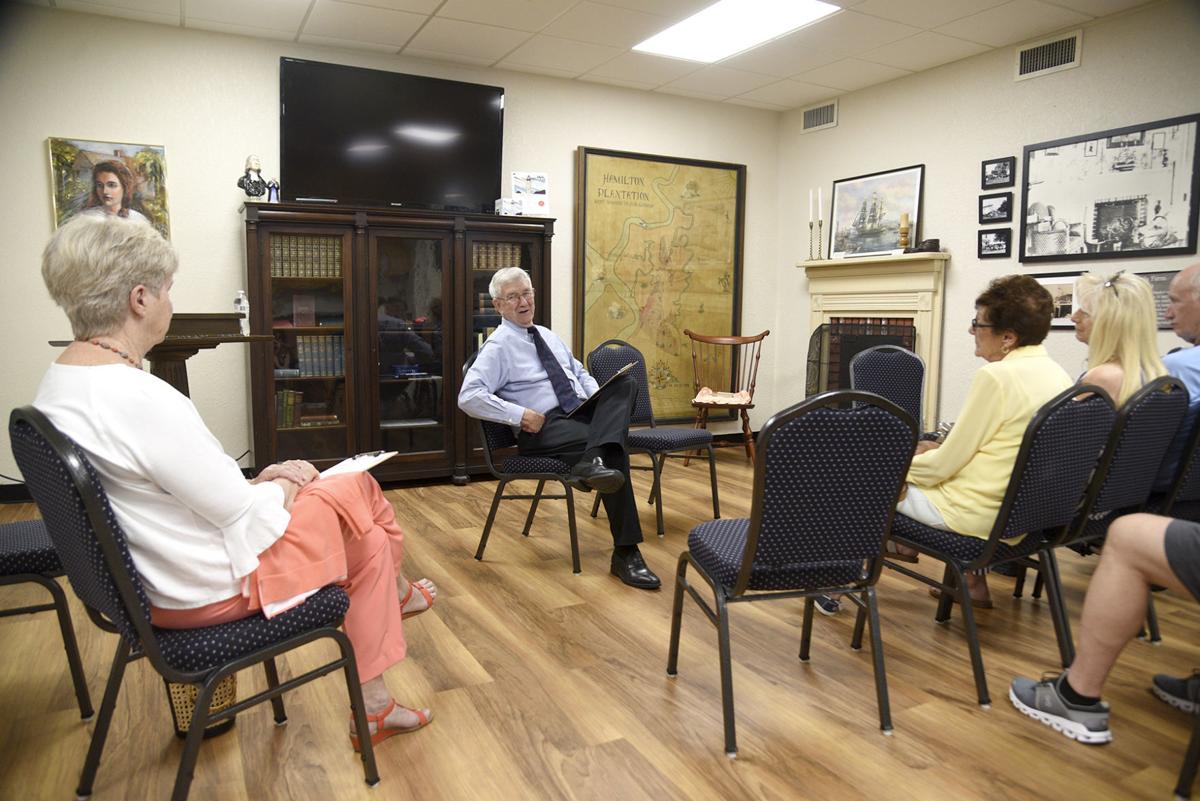 The Rev. Dave Hansen, center, lectures about Wesley to attendees at Epworth By the Sea on St. Simons Island. Wesley visited the island five times during his stint in the New World in the 1730s.

A statue of the Rev. John Wesley, the founder of Methodism, is pictured at the Arthur J. Moore Museum at Epworth By the Sea on St. Simons Island.

The Rev. Dave Hansen, center, lectures about Wesley to attendees at Epworth By the Sea on St. Simons Island. Wesley visited the island five times during his stint in the New World in the 1730s.

The man was a giant, standing 20 feet tall. Glazed in gold, he clutched a Bible in his right hand and extended his left, open palmed, an invitation to come closer.

This is the image of the Rev. John Wesley that greets those who enter the Arthur J. Moore Methodist Museum and Library at Epworth by the Sea on St. Simons Island. The founder of Methodism looms large on the very ground that he walked upon more than 280 years ago.

While the depiction is an impressive one, it’s not a true representation of the man. In actuality, Wesley was small framed, 5 foot, 3 inches tall, weighing in at 122 pounds. Like the statue compared to the reality of his stature, Wesley’s real life seems to oppose his untarnished legacy. In reality, Wesley was filled with a contradictions and shortcomings that plagued the pious yet all too human man.

It’s a story that has long intrigued the Rev. Dave Hansen. The retired Methodist minister has dedicated decades to unraveling the real John Wesley. What he’s discovered is a fascinating tale of a mortal man desperately seeking to be worthy of God’s redemption and grace.

“I got really excited about John Wesley and what he did when he was here on this island. He made five trips here from Savannah,” Hansen said.

“I’ve read everything I can find about those days here. I’ve read diaries and all kinds of accounts. I started doing this lecture in 2003, so 16 years ago.”

The story begins with Wesley’s birth in Epworth, England, which is why the Methodist center bears this title. Like St. Simons, Epworth was also located on an island off the coast.

“His father Samuel was the Anglican priest there on the island at St. Andrew’s church,” Hansen said. “He was the priest there for 13 years.”

Wesley had 19 brothers and sisters, nine of which lived past infancy. One of his brothers, Charles, would follow a similar path to John, leading both to the New World and St. Simons Island. But before that happened, John pursued a life of learning, attending Christ Church College at Oxford University in 1720, when he was just 17.

“He was a good student in all of his classes but especially in languages. John Wesley spoke eight languages, which is just astounding ... I can barely speak one,” Hansen said with a laugh.

After completing his studies, he went on to teach and eventually was ordained. While still ensconced in the world of academia, Wesley and Charles founded a small group that met frequently to discuss the Bible and elements of spirituality. The group, which they titled the Holy Club, was so meticulous about its meetings, prayers and structured beliefs, others dubbed them “Methodists” since they were so beholden to their “method.”

Over time, and through animated detail, Hansen outlines how Wesley eventually finds his way to a ship named the Simmonds under the direction of Gen. James Oglethorpe, who was the governor of the new colony of Georgia. Wesley, after much deliberation, decided to join the voyage so that he could, among other spiritual pursuits, minister to the Native Americans. He hoped that the adventure would help him to lead a life of solitude and prayer. But that, like much else in his life, didn’t go quite as planned.

“John Wesley had this idea of ministering to the Indians ... but when he actually got here, he changed his mind. He wanted to go out and minister to them and Oglethorpe told him, ‘they’re going to kill you and scalp you.’ The ones he did met weren’t really open to hearing what he had to say. So he was very hard on them in his diary,” Hansen said. “If you see paintings of Wesley ministering to the Native Americans, don’t believe it because it didn’t happen.”

He was able to minister to the colonists who were inhabiting Savannah and later St. Simons Island at Fort Frederica. But he didn’t have great luck with them either. They resented John and Charles’ strict rules, which included no hard liquor and no discharging of guns on Sundays. Many tried to find ways to have the Wesleys sent back to England.

Two local women even conspired to use rumor to have the brothers cast out of the colony. While that didn’t work, women did pose more of a danger to John than the Spanish, situated to the south, or any Native American. John Wesley fell in love with a St. Simons Island-based girl named, Sophy Hopkey. But couldn’t decide whether to marry her or embrace a life of celibacy.

Wesley did marry years later in England and it was a very unhappy union, he added. But it was Sophy Hopkey that eventually had Wesley sent back home.

After she married someone else, John Wesley denied her communion because she had not previously confessed, another of Wesley’s hard rules.

“He denied her communion, and she leaves the church in tears. (The colonists) take out a warrant against him for embarrassing her. He’s facing a trial which is postponed month after month. He finally decides to leave. He gets on a ship, called the Samuel and goes back to England,” Hansen said.

“He gets to the middle of the ocean and they hit a storm. He is terrified. He writes in his journal ... ‘I went to Georgia to save the Indians, but who is going to save me?’”

Ultimately, in spite of his perceived failures, Wesley discovers a rebirth of faith. During a prayer meeting in England, he was touched by the Spirit and really began his spiritual life anew.

“He wrote in his diary, ‘I felt my heart strangely warmed and I trusted Christ and Christ alone for my salvation. And assurance was given to me that my sins were forgiven ... even mine,” Hansen recounted with a smile.

The Rev. Dave Hansen offers an in-depth lecture on the Rev. John Wesley at 2 p.m. every Thursday at Epworth By the Sea on St. Simons Island. Here are some fun facts about John Wesley:

• He started the sunday school in Savannah in 1736

• He continued the small group movement

• There are letters in Wesley's own hand at Epworth's museum.