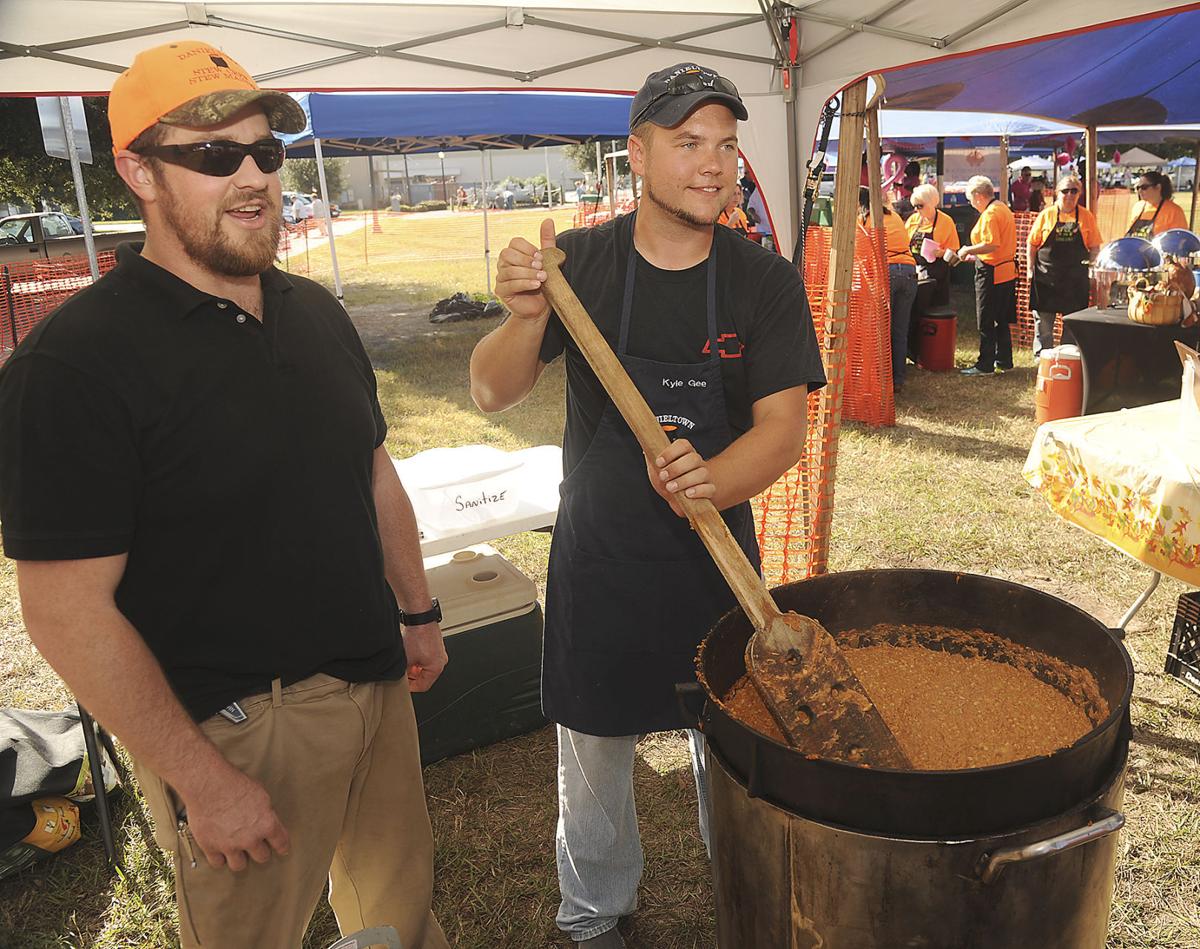 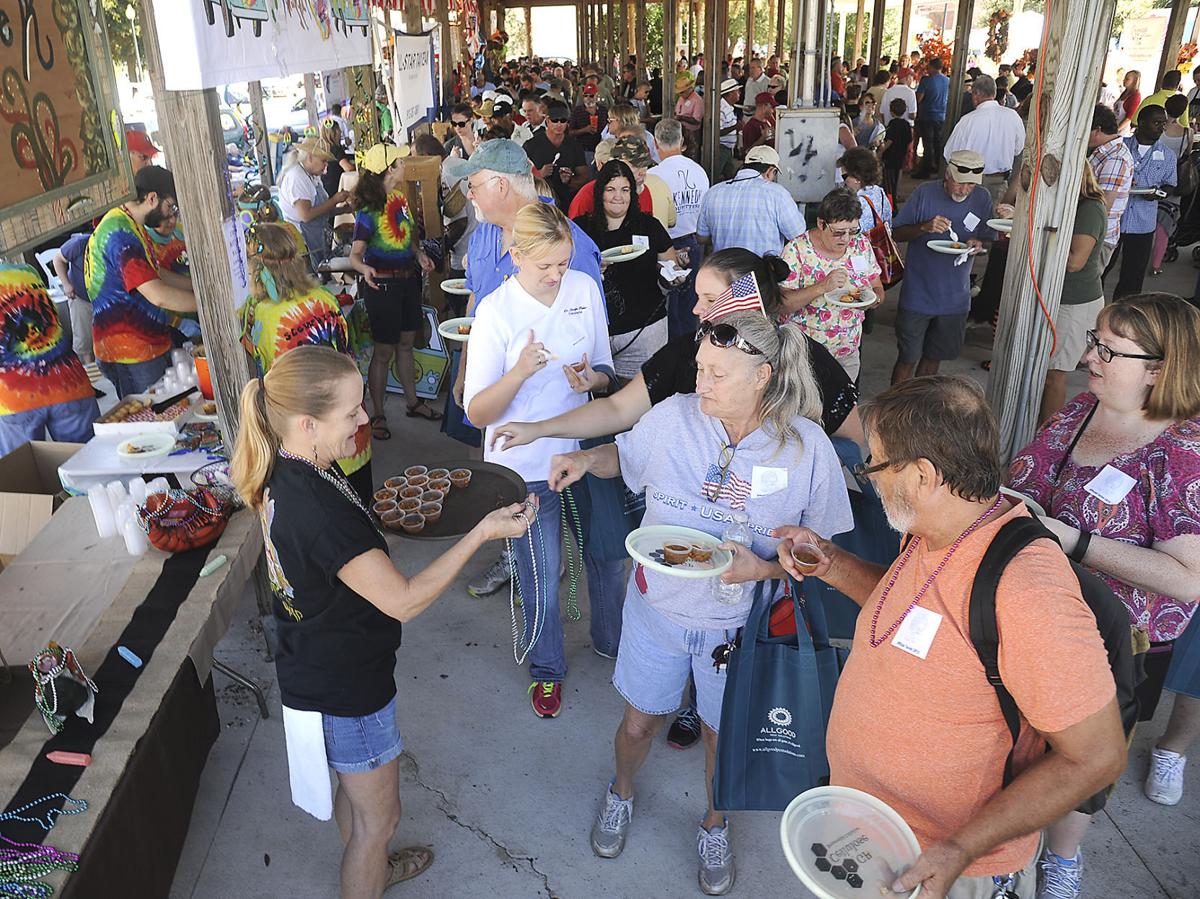 Above, Karen Fricke with the Blackwater Grill stew team hands out stew and beads. Below, D.J. Kerns, from left, Ryan Wommack, and Molly Wommack keep the G.P. Cellulose Stewby-Doo and the Stew Crew team’s stew stirred. 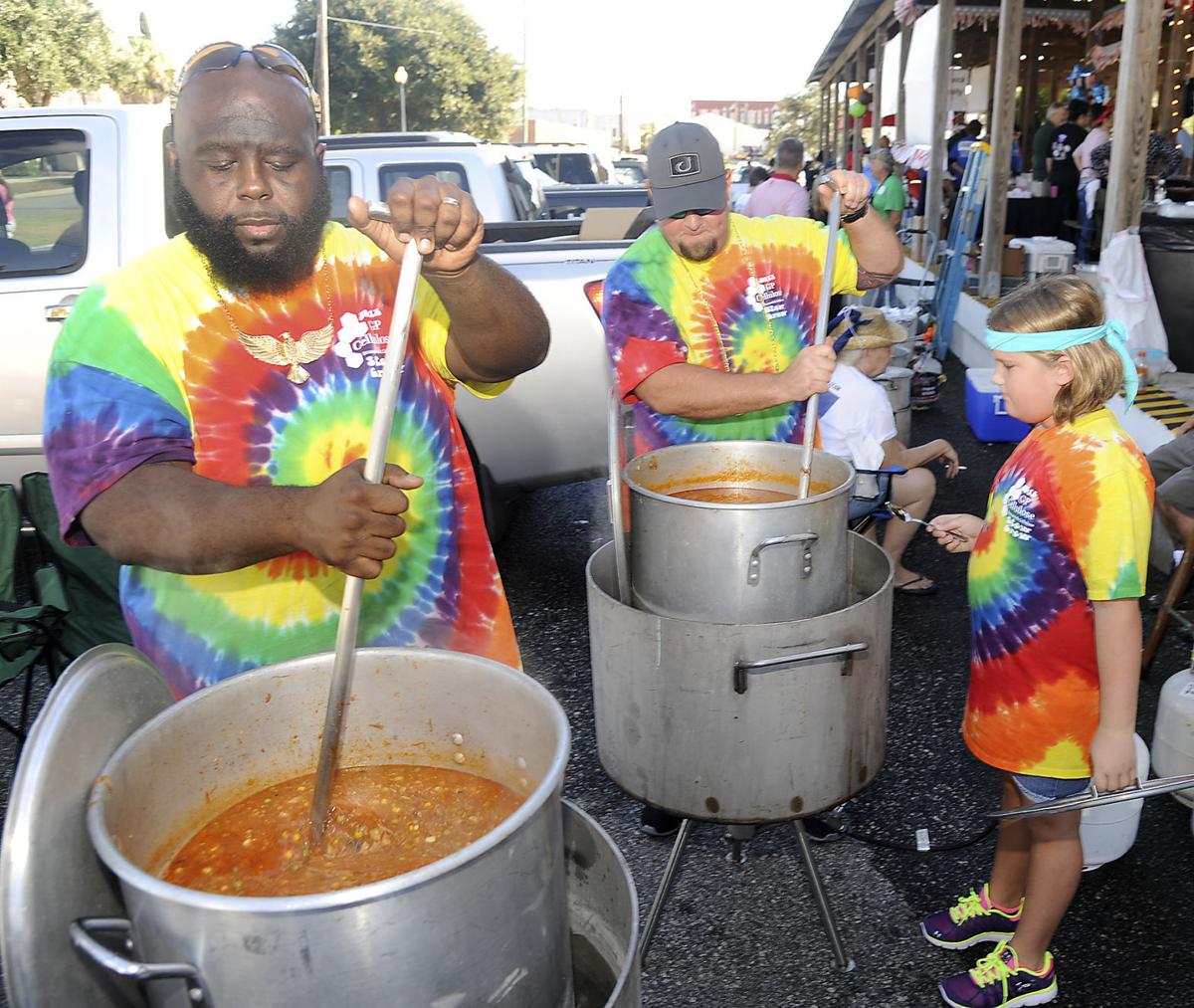 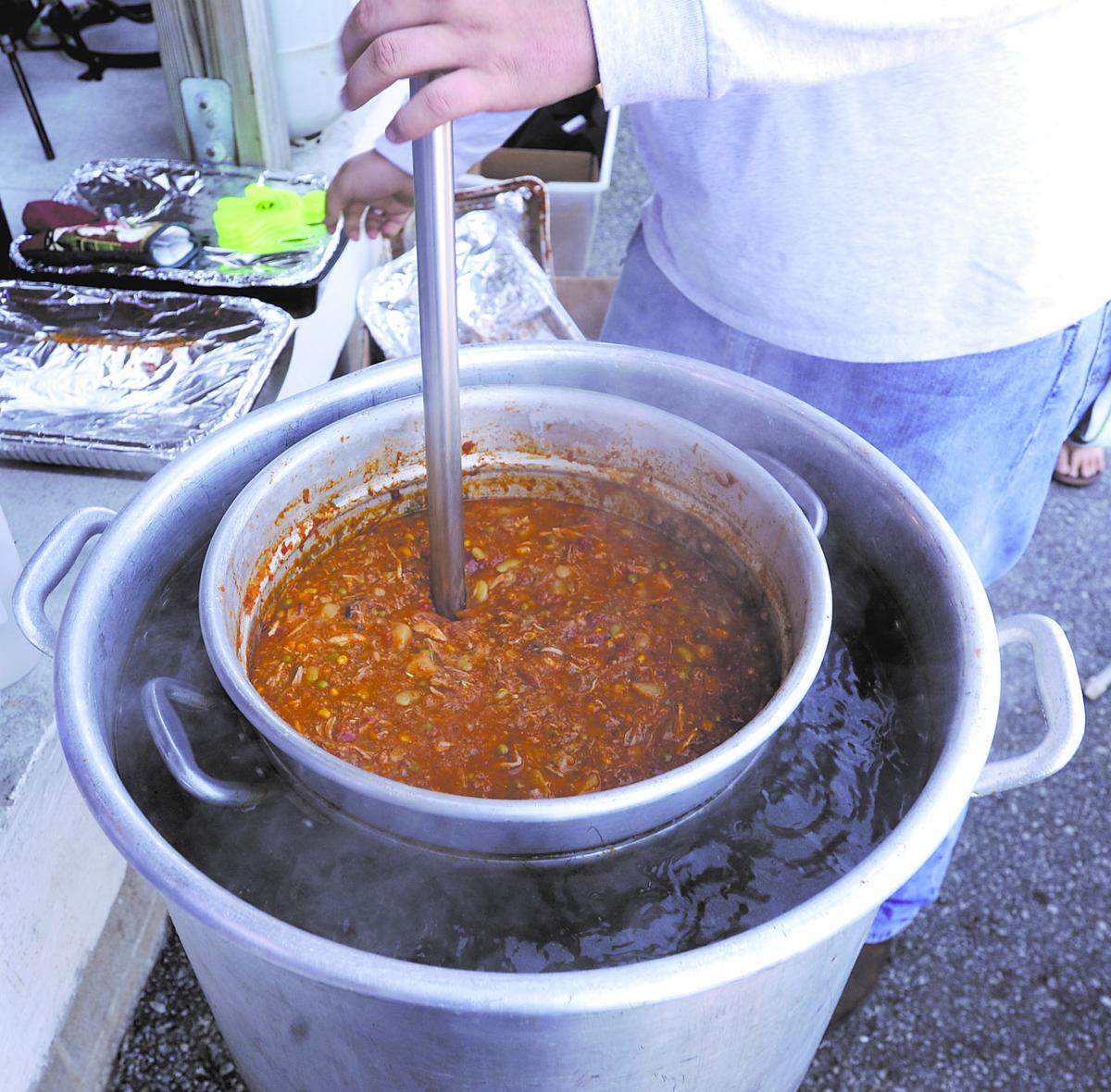 Samplings of various stews of the annual Rockin’ Stewbilee will take place from 11 a.m. to 2 p.m. Saturday at Mary Ross Waterfront Park. 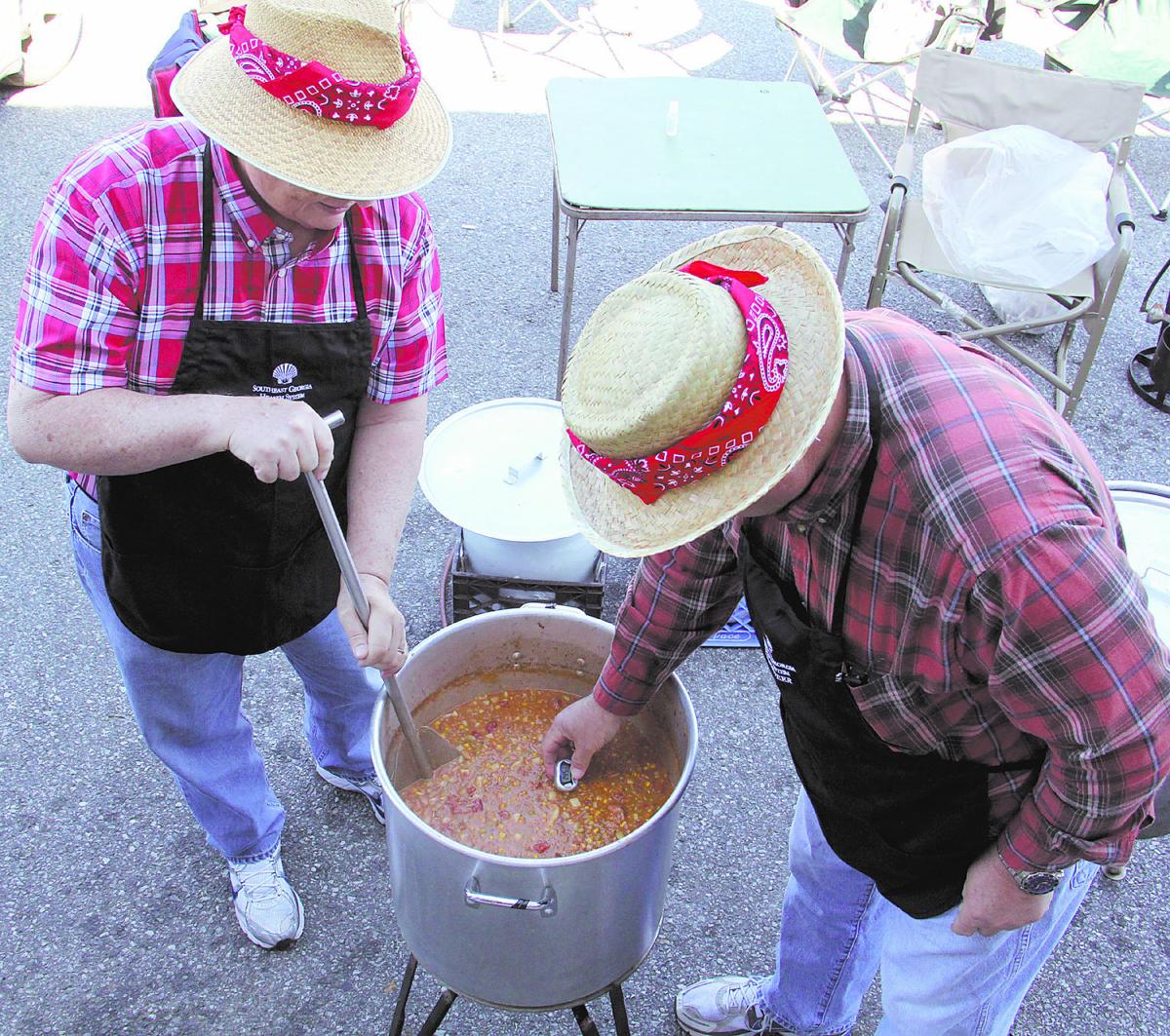 A cook stirs a pot of Brunswick stew while another checks the temperature at last year’s annual Rockin’ Stewbilee.

Above, Karen Fricke with the Blackwater Grill stew team hands out stew and beads. Below, D.J. Kerns, from left, Ryan Wommack, and Molly Wommack keep the G.P. Cellulose Stewby-Doo and the Stew Crew team’s stew stirred.

Samplings of various stews of the annual Rockin’ Stewbilee will take place from 11 a.m. to 2 p.m. Saturday at Mary Ross Waterfront Park.

A cook stirs a pot of Brunswick stew while another checks the temperature at last year’s annual Rockin’ Stewbilee.

The origin stories of Brunswick stew are as varied as the recipes themselves.

Localities across the Southeast all lay claim to the traditional southern dish, most notably in Brunswick County, Va., and here in Brunswick, Ga.

As the legends go — at least from a Virginian’s perspective — Brunswick stew was first made in 1828 by a hunting camp cook who threw together a pot of squirrel meat, some vegetables and maybe some stale bread. The cook, Jimmy Matthews, was a servant for a Virginia state legislator and was brought along on a hunting trip to Brunswick County.

The competing theory, and the narrative told by Georgians, is the stew originated here in Brunswick, Ga. in 1898. Local officials even profess to have the original pot, on display at Mary Ross Park downtown.

Barring the invention of time travel, the mystery may never be solved. John Burrison, an English professor and folklore specialist at Georgia State University in Atlanta, said there may be more than one answer.

“There are lots of different versions of how (Brunswick stew) came about, I don’t think you can prove any of them,” he said. “Did it originate in Brunswick, Ga., or Brunswick County, Va., which claims to be the origin? My thought is it’s a kind of generic stew. It’s basically a stew with meat and grains. Native Americans here in the Southeast made similar stews, and there are African stews that are similar.”

The Georgia-Virginia rivalry over the murky, meat-filled concoction is nothing new, but arguably cemented in 1988, when the Virginia General Assembly issued a proclamation declaring Brunswick stew their own.

The Virginian declaration all but calls Georgians scalawags for asserting ownership of the delicious fare, calling Georgia’s claims “pernicious blasphemies,” which have “spread across America, giving rise to speeches and wicked accounts of its origin.”

Virginia state Sen. Richard Holland, in a 1999 documentary by filmmaker Stan Woodward, took things a step further and said folks in Brunswick, Ga., were “absolutely wrong,” about their stew.

“The tastes of Brunswick stew in Virginia have been far superior to that of Brunswick, Ga., for many years,” he continued.

Georgia fired back with a state House of Representatives’ proclamation of its own, which was presented to the Glynn County Commission by State Rep. Virginia Ramsey on April 21, 1988, according to public records.

In the mid-2000s, then-Gov. Sonny Perdue weighed in, saying “anybody who wants to use chicken bouillon cubes doesn’t know much about Brunswick stew.”

Ron Adams, a resident of Brunswick, Ga., and the defending champion chef of this year’s Brunswick Rockin’ stewbilee, set for today, is a bit more diplomatic and said there’s room for every variety of stew, even if the Georgian style might be the best.

The award-winning stewmaster said Georgia Brunswick stew is about more than local pride.

“A stew here in Georgia will have more distinct ingredients, and you can taste them when you look at them,” he said. “There’s more texture to Georgia Brunswick stew than Virginia Brunswick stew.”

That may be true. The Virginia variety is generally made with chicken — although folklore says it was originally made with squirrel — and includes different vegetables than the Georgia style.

Rodney Elmore, a stewmaster in Lawrenceville, Va., the seat of Brunswick County, told The News by phone his variety may have changed since its inception, but the overall qualities have remained the same.

“Over the years, the recipe has changed,” he said. “We’ve replaced squirrel and added other vegetables, but it’s still rich, and the taste is pretty much the same.”

He said he remembered coming to Brunswick, Ga., some years ago for a Brunswick stew cook-off, and bragged that folks here picked his variety for a people’s choice award.

“It seems the people in Georgia preferred ours more,” he said. “Basically, it’s a different recipe. Everyone has their own likes of what they eat.”

Bryan Thompson, former Brunswick mayor and proponent of the Georgia stew recipe, was far less delicate in describing his rival’s style of stew.

“Those people put roadkill in that stuff,” he said of Virginians, laughing heartily. “You can just make a blanket opinion of the state of Virginia by saying they have no idea what they’re doing. Few of those people can even read.”

For Thompson, the rivalry between Brunswick, Ga., and Brunswick County, Va., is as good as the stew itself.

“My favorite part of the rivalry is, I think, to continue to make outrageous claims,” he said. “It opens up so many doors to make insults against not only individuals, but entire populations, and even an entire state.”

He can barely contain his laughter recounting a trip he took with other city officials to Brunswick County, Va., some years ago to attend their Brunswick stew cook-off.

“As we were leaving, we actually stole the trophy and peeled out,” Thompson said, recounting the story in between fits of laughter. “We had a guy throw it to me, and I was in the car. The former mayor gunned it, and we didn’t slow down until we got to North Carolina.”

The outrageous account made national news, and the trophy was flaunted in that year’s annual Christmas parade.

On another occasion, a delegation from Virginia came to the Brunswick Rockin’ stewbilee here, and Thompson had the chief of police arrest the Virginians for “impersonating a stewmaster.”

“They took them to the police station, and everything,” Thompson said. “It was hysterical.”

It goes without saying the charges were dropped, and in recent years, the rivalry has diminished, although for Thompson, it’s still stewing deep down.

“I mean, it makes no sense, so don’t try to figure it out,” he said. “We’re literally talking about a bowl of vegetables with some meat in it, but everyone gets a big laugh out of it.”

He said the rivalry may have died down in part because he left office, and he encouraged current Mayor Cornell Harvey to pick up the mantle and poke a little fun his counterparts in Virginia.

“I would encourage the new mayor to start trash talking Virginia,” he said, still laughing. “It just comes with the job. I don’t know if he understands that yet; I think it’s in the city charter.”

The Rockin' Brunswick Stewbilee is 11 a.m. to 2 p.m. today at Mary Ross Waterfront Park, at the intersection of Bay and Gloucester streets in Brunswick. Adult tickets are $6.

Michelle Sligh envisions a Hollywood-like studio in Glynn County that will help meet the demand for movie makers in Georgia.

Looking out over a crowd of about 100 at Brunswick’s observance of the National Day of Prayer Thursday, the Rev. Steve Temmer, coordinator of the event, noted the low turnout.