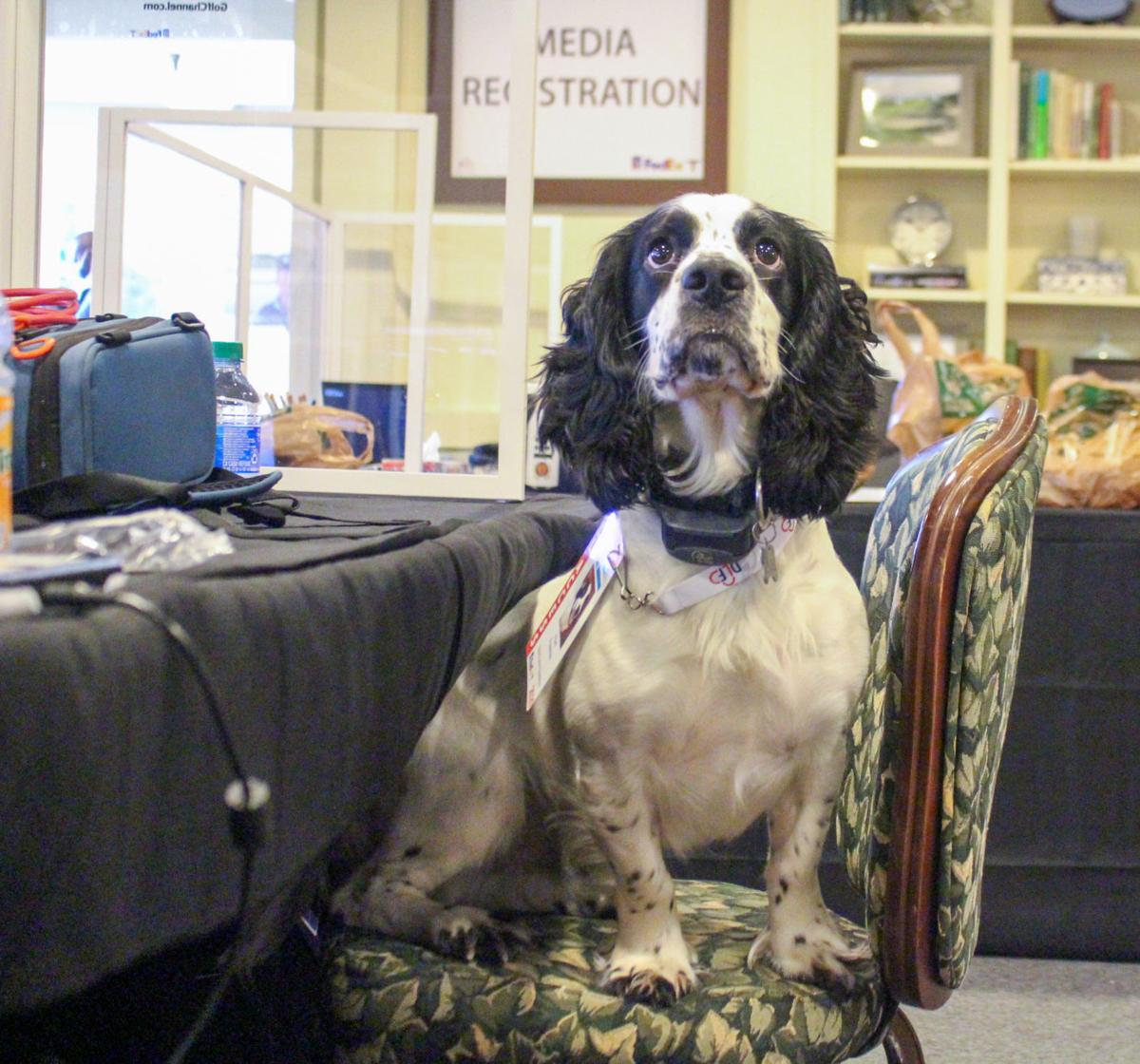 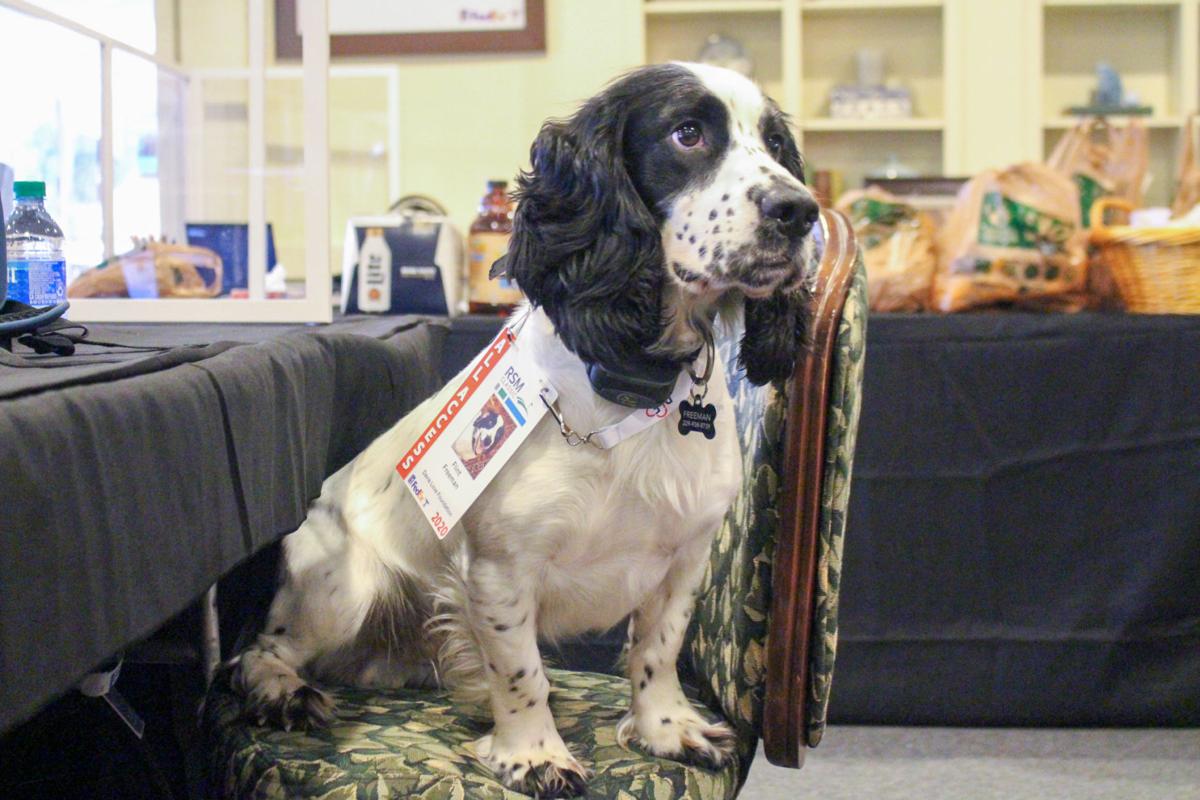 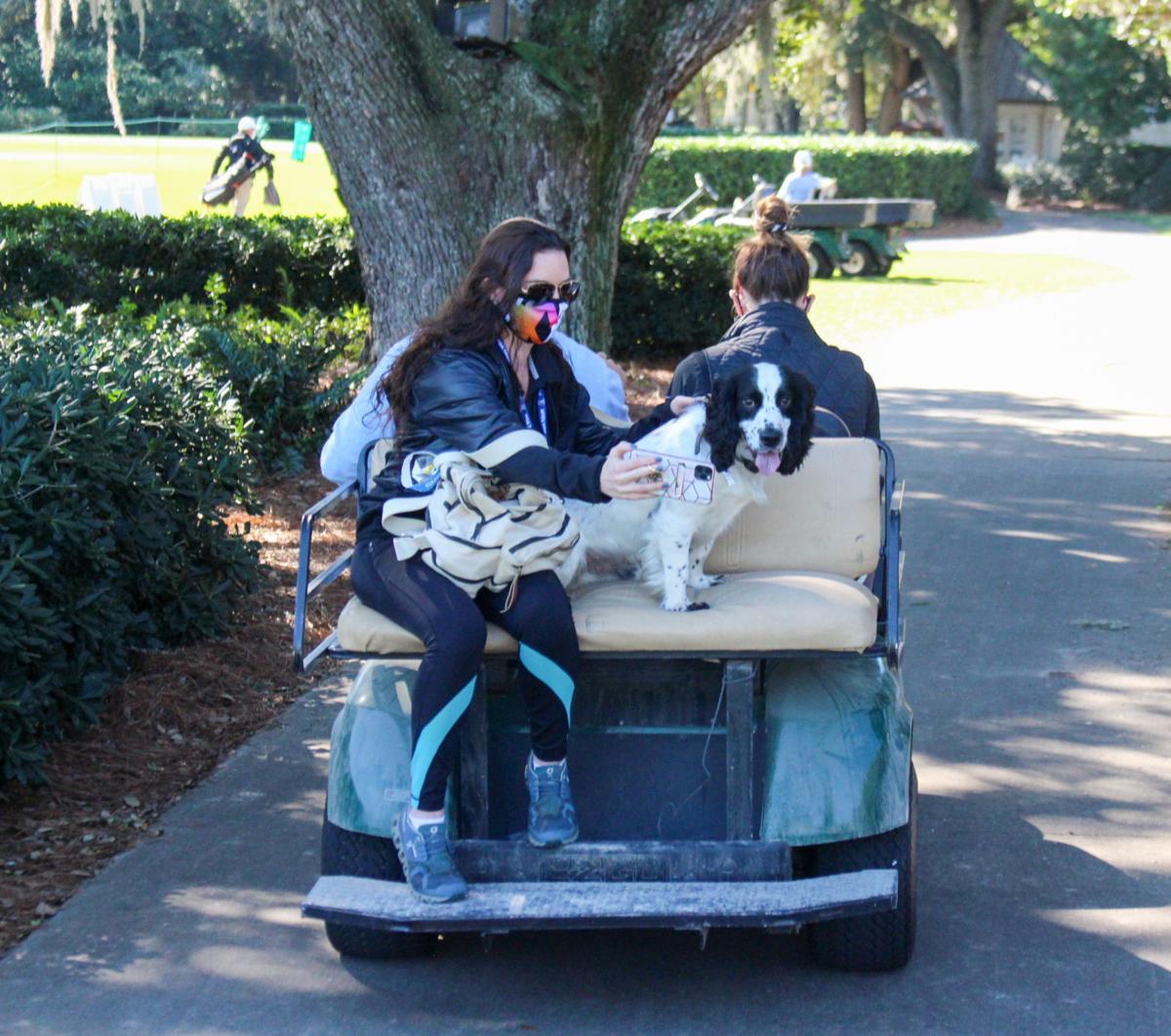 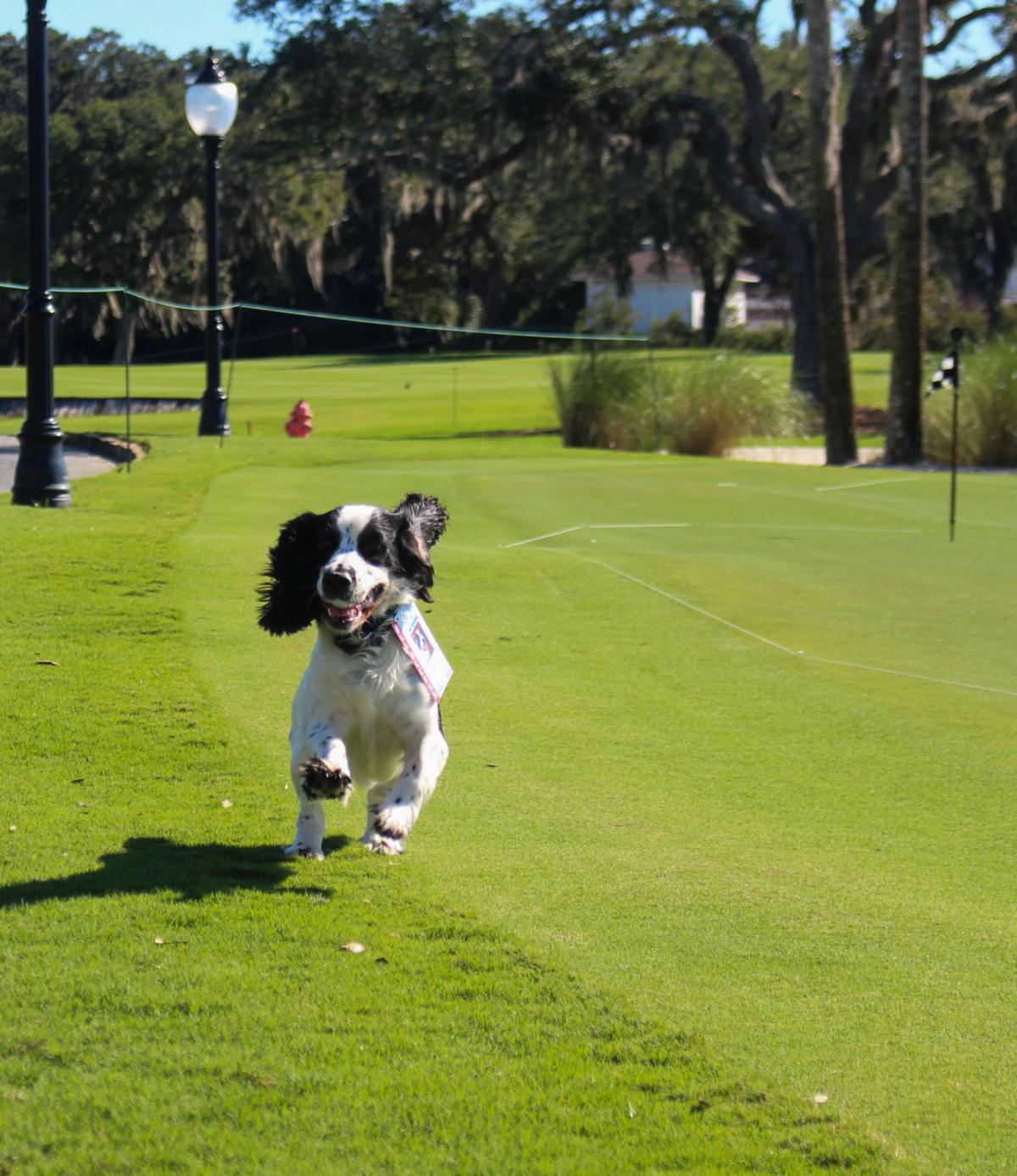 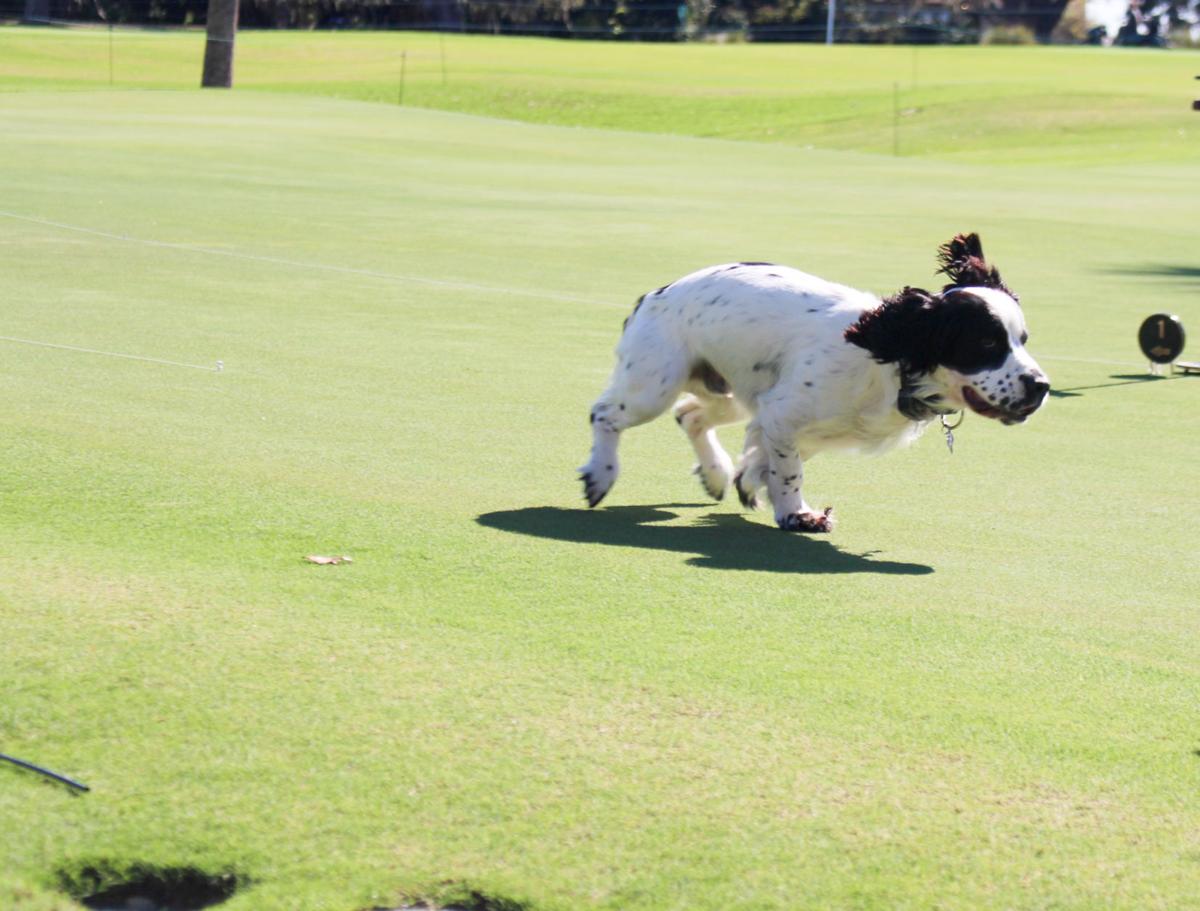 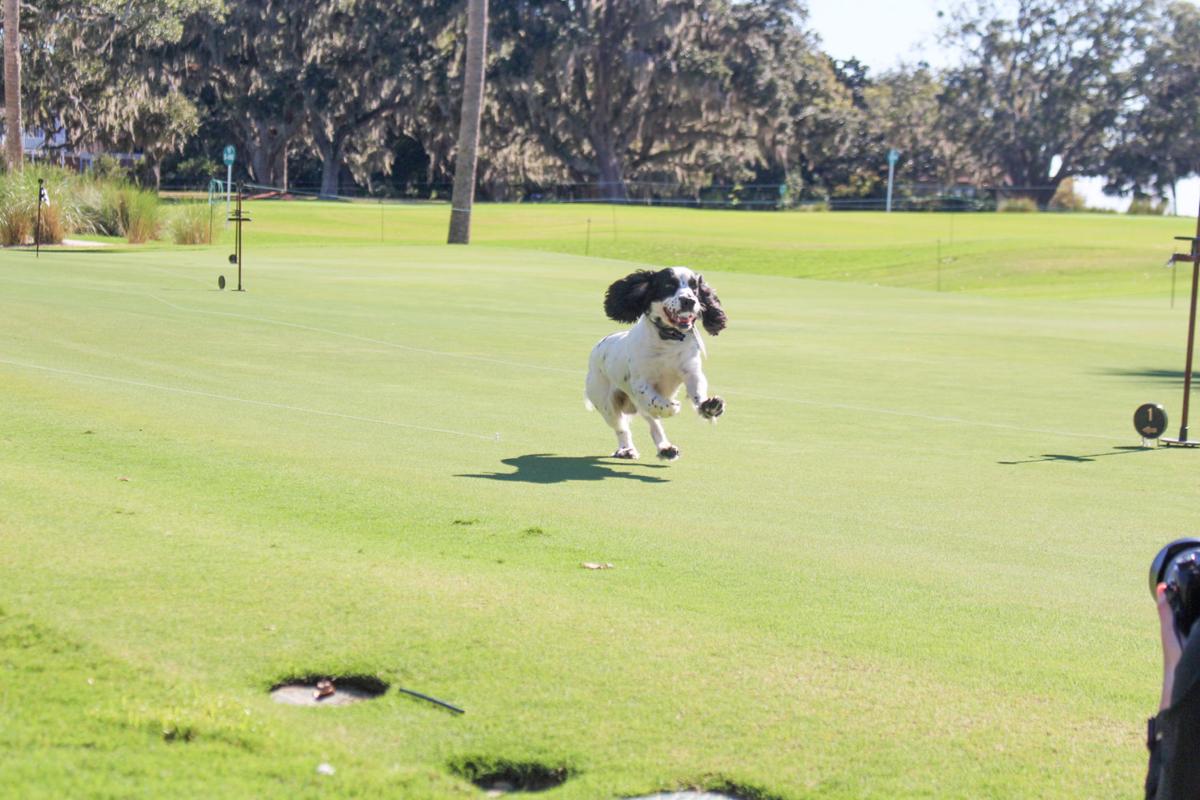 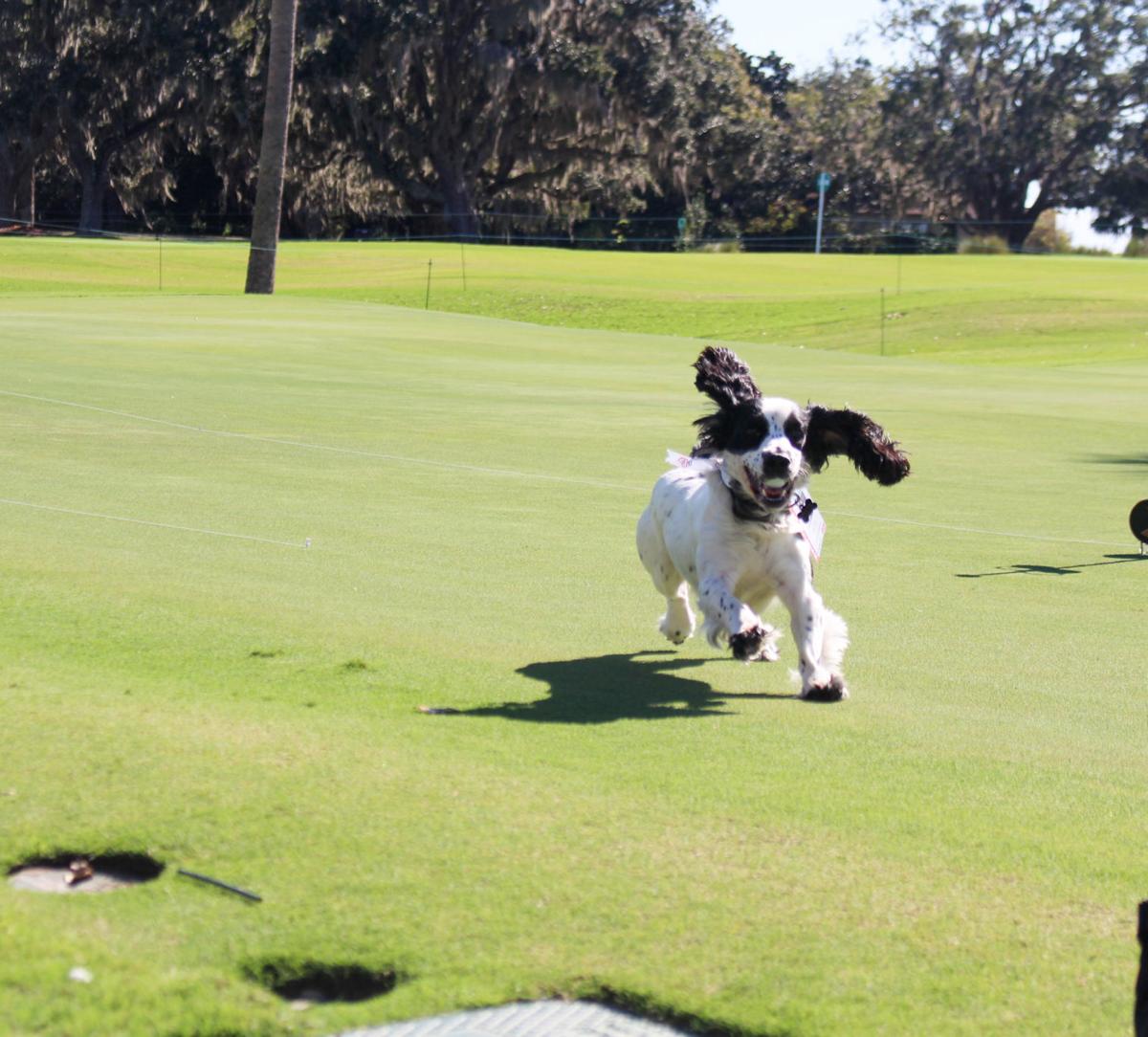 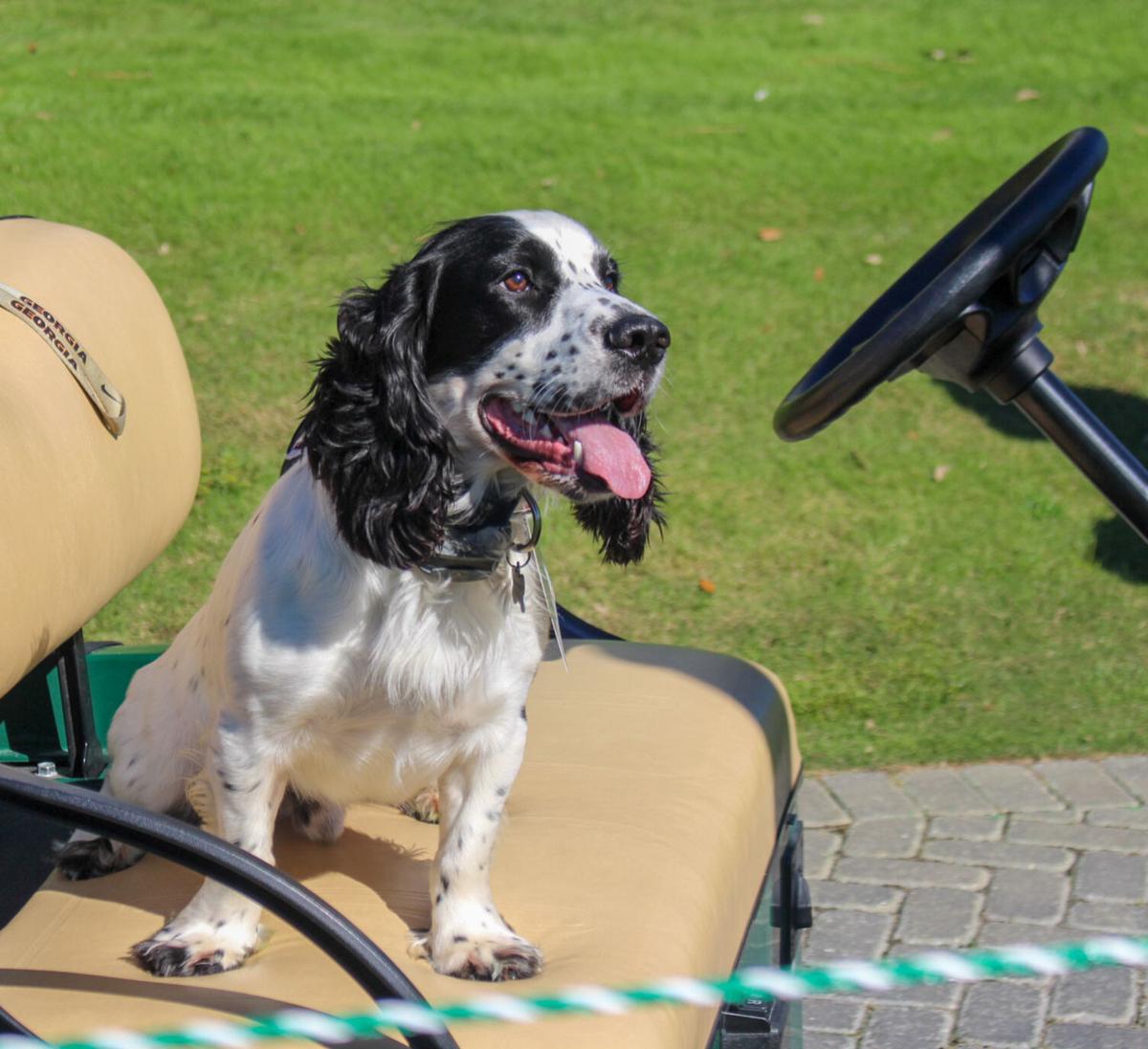 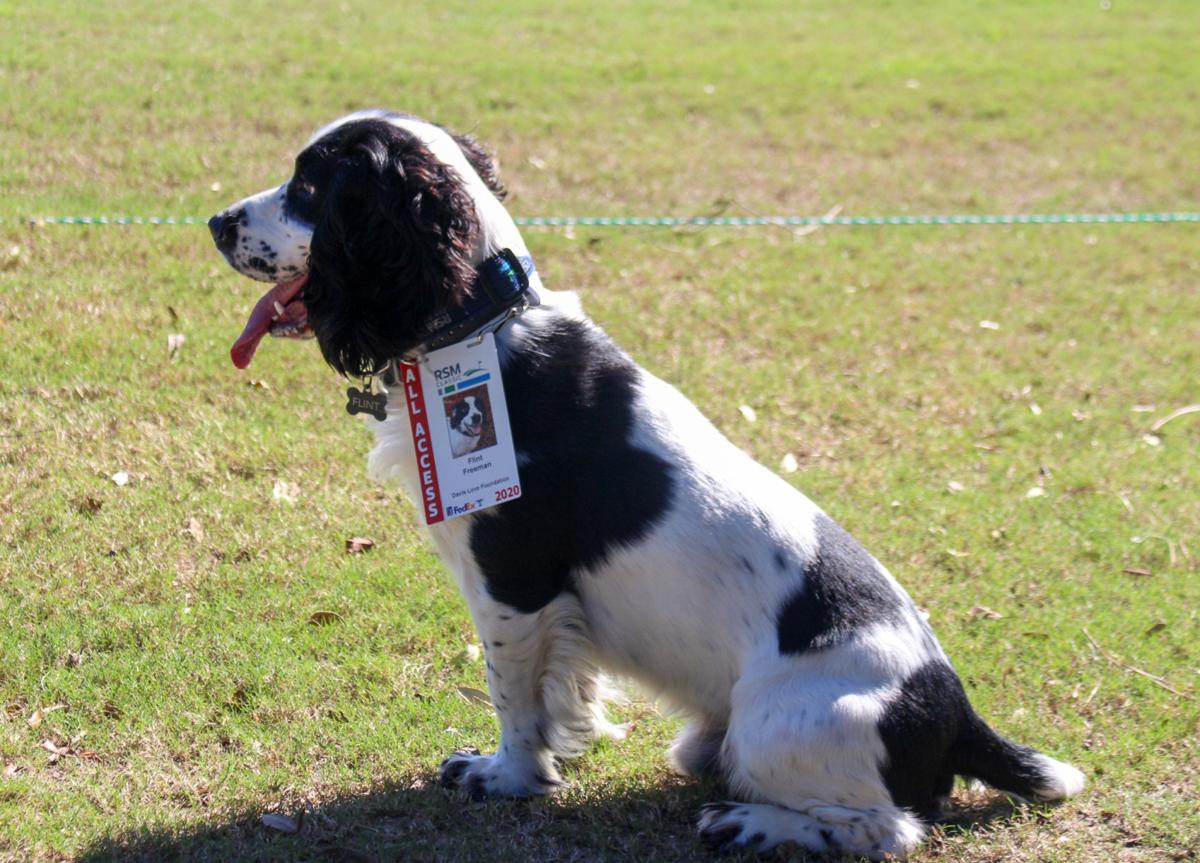 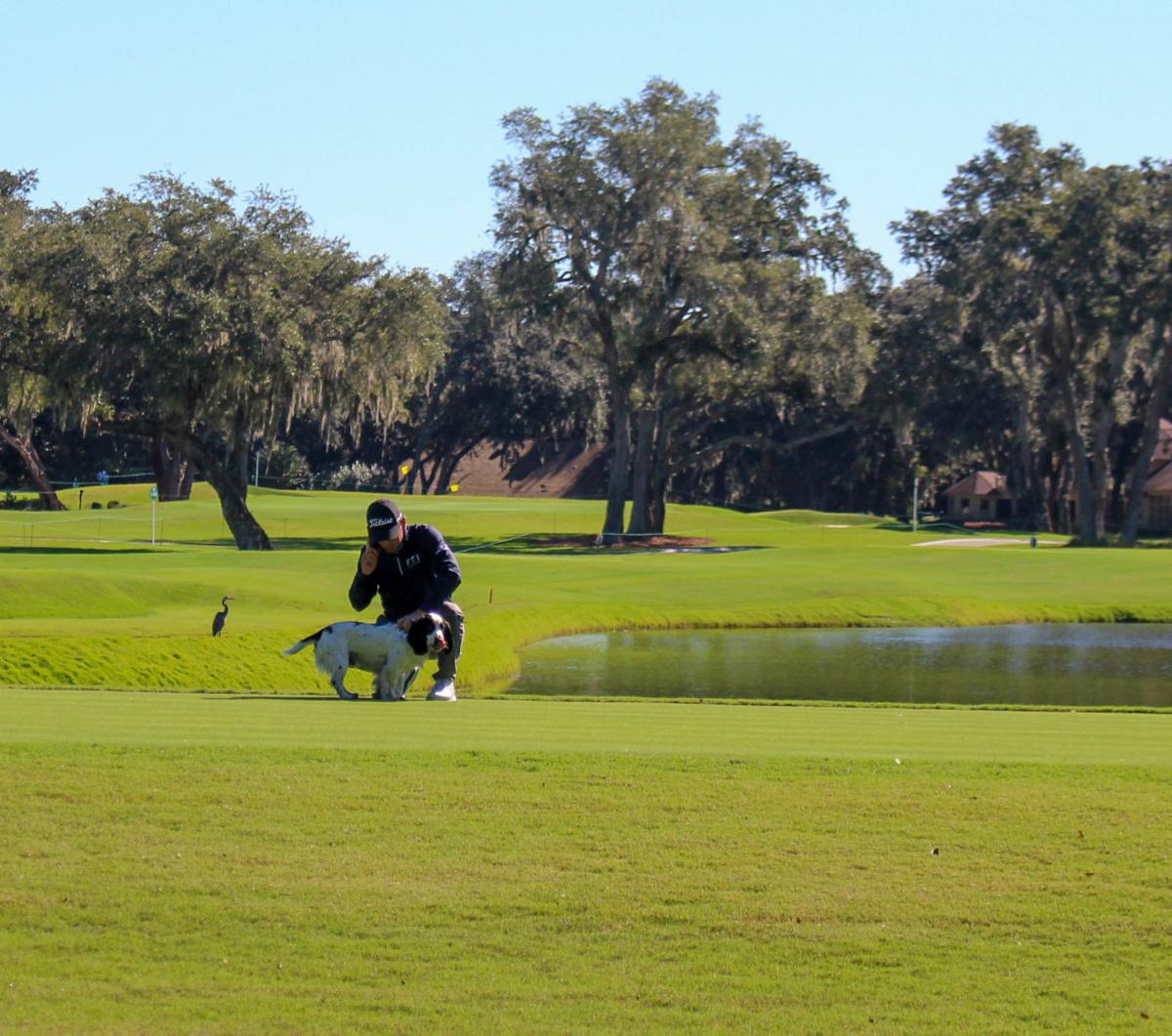 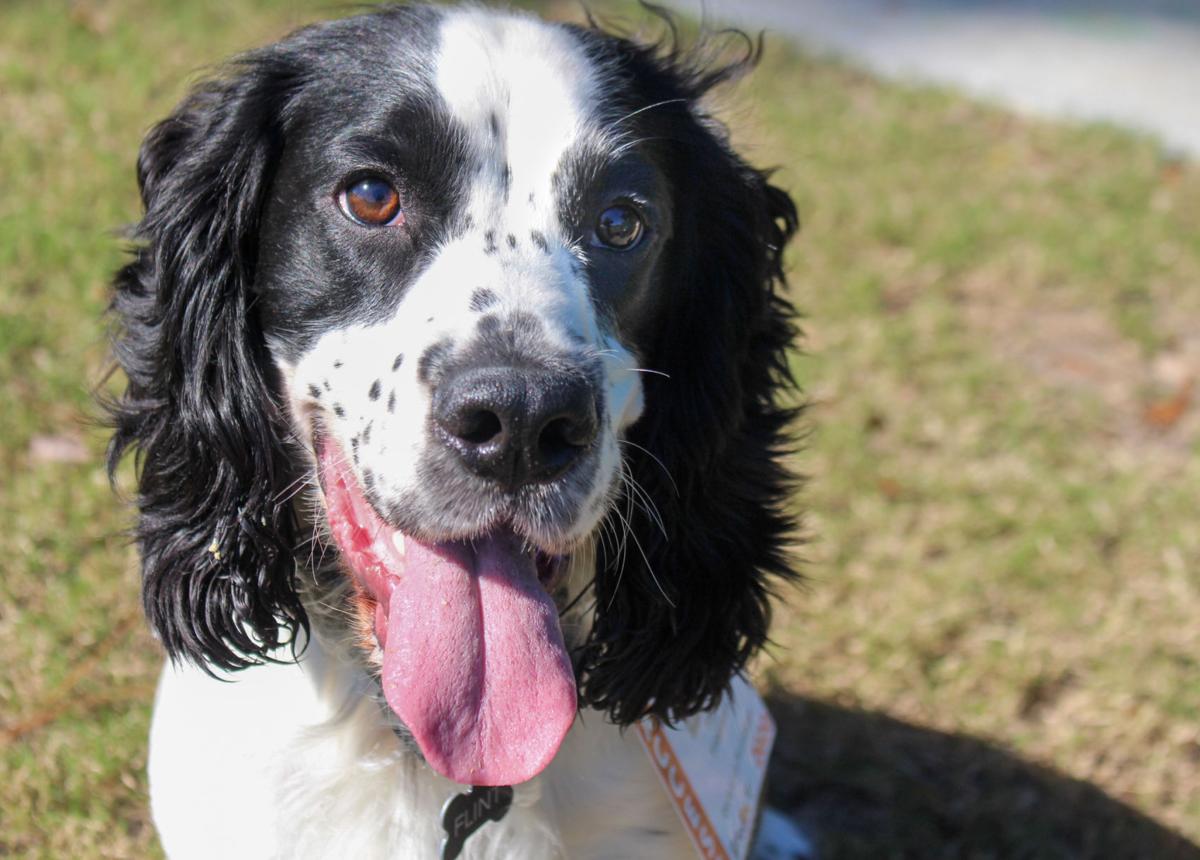 There are a lot of awesome dogs in this world — Uga, my dog Champ Bailey.

Then there is Flint, and English cocker spaniel, who gets to hang around Sea Island year-round. This week, he is making the rounds at the RSM Classic and helped break ground at Plantation with Mark Love when it was rebuilt last year. He’s honestly one of the coolest dogs ever.

With those big floppy ears and sweet smile, everyone feels compelled to drop to their knees to pet him. It is quite evident that Flint is in charge.

The 2-year-old doggo even has his own credential badge — all-access at that.

His mom is the RSM Classic’s Tournament and Volunteer Manager, Christian Freeman, who has been with the event since 2016. She started out as a volunteer and worked her way up, while meeting Flint’s dad in the process — they both played golf at Coastal Georgia.

Freeman and Melanie Trotter, RSM Classic’s media director, brought him into the media room on Tuesday, and he ran wide open towards me — I knew immediately we’d be friends. Then he jumped up in a chair at one of the desks like it was his and sat down, ready for his photo op.

“My husband spent a lot of time with Flint — probably in the first year that we got him,” Freeman said. “He learned how to sit, and he was about 12 weeks old, and it went from there. He’s so smart. My husband took up a lot of time with him, and I say by 1, he was fully trained.”

She gets to bring him to work almost daily. Flint gets to come during the early part of tournament week, but Freeman said he stays home when things get too busy.

“He comes to work with me just about every day, except tournament week,” Freeman said. “He’s our emotional support around here.”

Flint took over the role of the RSM dog after his mentor, Grace, retired.

“He was around last year, not as much because he was still little,” Freeman said. “We had Grace, who was the golf dog last year, and she’s recently retired. So Flint took the role this year. He’s old enough to be out here now and trained.”

Like Grace did, he does rounds all over the course, checks in on golfers at the range and putting areas — always stopping to get a good head scratch.

“Well, in the morning, we make our rounds, and we tell everyone, good morning. We get all the kisses and belly rubs we can take,” Freeman said. “Then usually we take a ride around on the golf cart to get some fresh air. He is a ball chaser, so he likes to go to the range and watch the balls. Mainly hang out the office, greets everybody that comes in and then the occasional golf cart ride.”

On Tuesday, the PGA Tour digital group decided to do a piece on Flint, and when Freeman said he likes balls, it wasn’t long until he showed us just how much.

They took him to the 18-hole putting green, and as soon as he saw someone hit a ball, he took after it and stole it from him. He even got Sungjae Im’s attention on the way over, who stopped and had to pet Flint.

The crew took him to Plantation’s 18th tee box, and Charles Howell III stopped what he was doing to speak. There is something about a dog that honestly brightens everyone’s day.

“It’s just so fun to have. I love him so much, and it’s so fun to have others that appreciate him for his happy spirit — he’s just contagious. I feel like if we’re all stressed in the office, you bring Flint to a meeting and everyone just kind of takes a deep breath, and we just all try to be as happy as he is.”