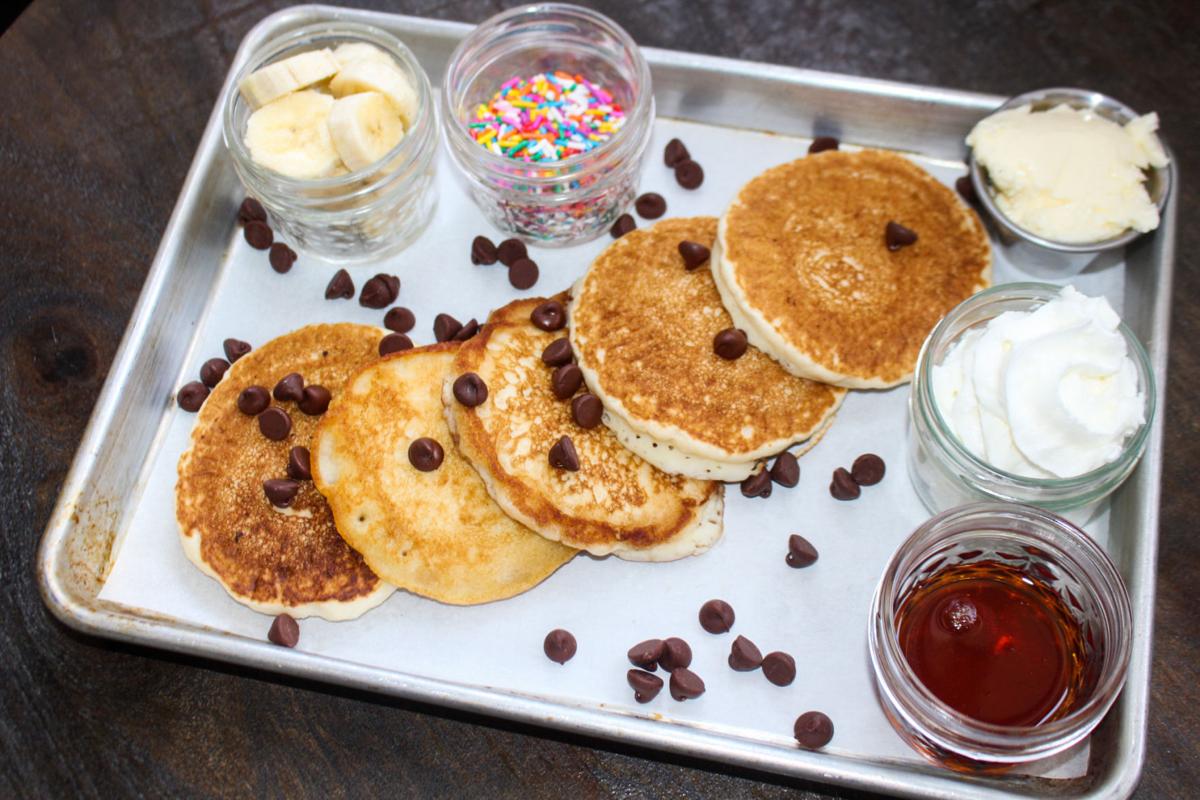 A pancake board from Reid’s Apothecary in downtown Brunswick. 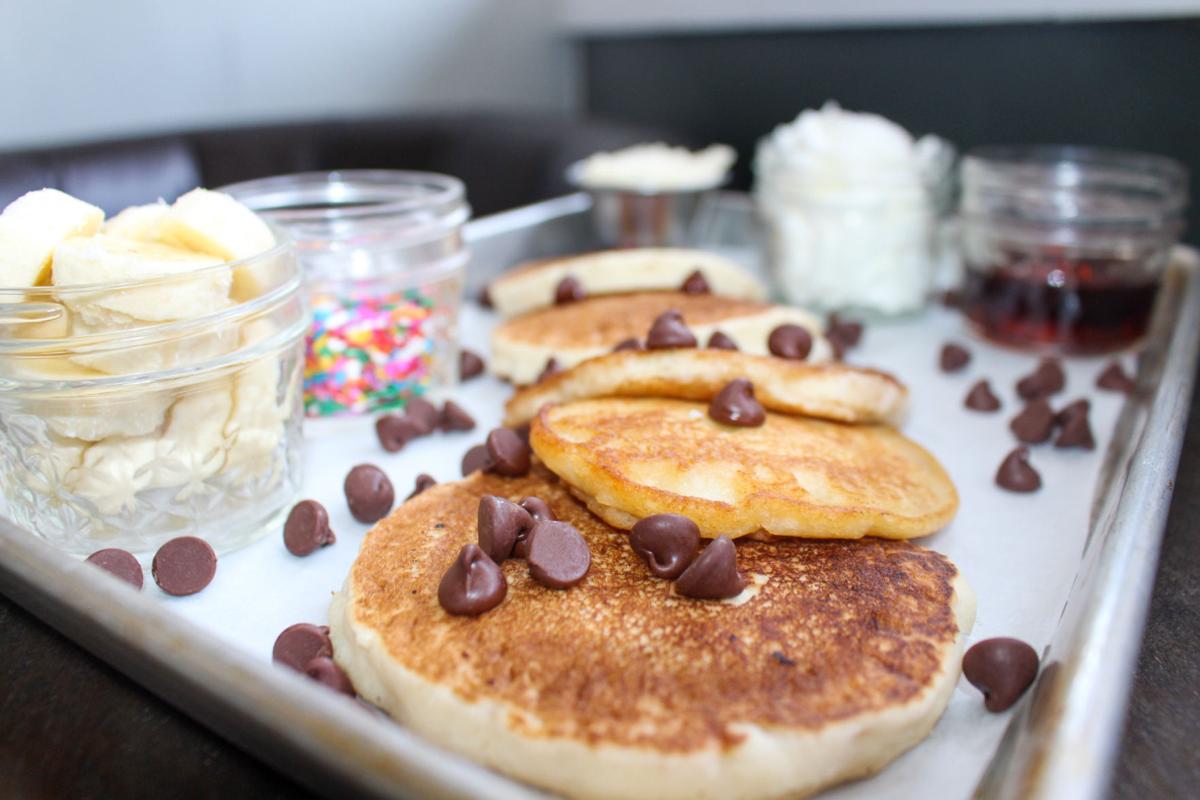 A pancake board from Reid’s Apothecary in downtown Brunswick.

Reid’s Apothecary in downtown Brunswick is known for being unique, from its cocktails to their food choices, so it makes sense they would incorporate that distinctiveness in their brunch menus on Saturday and Sunday.

Owner Chris Gantt said after a group of regulars asked about making the menu a little more famiy friendly by adding pancakes, he went to the drawing board and came up with a breakfast charcuterie-like board.

“We didn’t want to throw flapjacks on a plate,” Gantt said. “We’d rather be unique like we are with everything else. So we came up with the idea of building your own to where you can add sprinkles, whipped cream, different kinds of syrup, berry compote, sliced fruit, whatever you wanted to.

“The funny thing is more adults order it than kids, but as long as people enjoy it, that’s all that matters. That was the biggest reason for doing it. We were trying to become a little more friendly for big families, not just adults or young adults, things like that. So that’s the big reasoning behind it, but then just wanting to be creative, like our charcuterie board, so we did build your own pancake board.”

Reid’s already has a build your own charcuterie board on their dinner menu, and at first, Gantt said he didn’t know if breakfast and the ingredients that go on those boards would mix.

“We didn’t think it would translate to that kind of environment we’re trying to create, but with trying to be more family friendly, we’re like the charcuterie board idea is unique,” Gantt said. “People are doing pancakes, but by adding the build your own, it gets the kids involved in making decisions. It also gets people just out of their norm, ‘Hey, you know, I don’t have to get this set pancake. Now I can get just these little pancakes, and I can get chocolate chips with them, I can get sprinkles, whipped cream, whatever.’ So it gives a little bit more of options, and it just again makes us more versatile.”

He said sometimes people would get these pancake boards as their appetizer so everyone can have a little flapjack how they like.

It’s just one of the ways Reid’s has upped the brunch game in downtown Brunswick. Brunch seems to be the hottest kind of meal to have right now. From mimosas to breakfast food, it’s something young and old enjoy.

“We do brunch Saturdays and Sundays, but on Sunday, specifically, there are longer lines than Saturdays just because we’re one of the only places opened downtown on Sundays,” Gannt said. “It’s a different cuisine as in like you get a lot of younger crowd that comes out, and a lot of bigger families that are just like, let’s get up early make a day out of it, and go get brunch. It just gets them up and going. It doesn’t start at 5 p.m., so people feel much more energized. Bottomless mimosas help out a lot as well. People love coming in for the mimosas — that’s huge.”

It’s not just the mimosas that are a huge asset to their brunch. It was also adding the bananas foster French toast and deciding to incorporate some island flavor.

“Then us adding in Dulce Dough to do all of our bread — our biscuits are brioche,” Gantt said. “That helps a lot too because it gives us that island connection and keeps it local. People like supporting their business just as much as ours, so they want to come here for that. So I think that’s why it’s so successful.”

For Gantt, a perfect brunch would feature a long table where all his friends and family can come together to enjoy good food and good conversation. That’s what he hopes customers at Reid’s have as well.

“My perfect brunch idea is having a long table of family and friends and everyone just having a smorgasbord of items just grabbing from plates,” Gantt said. “When I was younger, my dad used to — Saturday morning after we did our chores, he would cook breakfast for everybody. It would just be big bowls in the middle of the table, and everyone just grabbed their food, and we just hung out for a little while. That’s my perfect brunch.”

Reid’s uses a standard pancake recipe, but it’s the added toppings that set it apart. They offer fruit, Nutella, chocolate chips and bacon jam. So the key is finding what toppings enjoyed most by each individual with delicious pancakes.

Mix the ingredients. The melted butter and vanilla extract are added extras that make basic pancake box mix a little richer and tastier. Don’t over mix the ingredients — it’s ok if there are small lumps. Use an ice cream scooper or a 1/4 cup measure to pour the pancakes to ensure they’re all the same size. The trick to flipping is when the edges become dry and the bubbles on top start to pop, then flip it. Cook another minute or two and resist the urge to smoosh down the spatula on the pancake. Serve with favorite toppings or syrup.

Samford University in Birmingham, Ala., recognized over 1,700 students named to the 2021 spr…