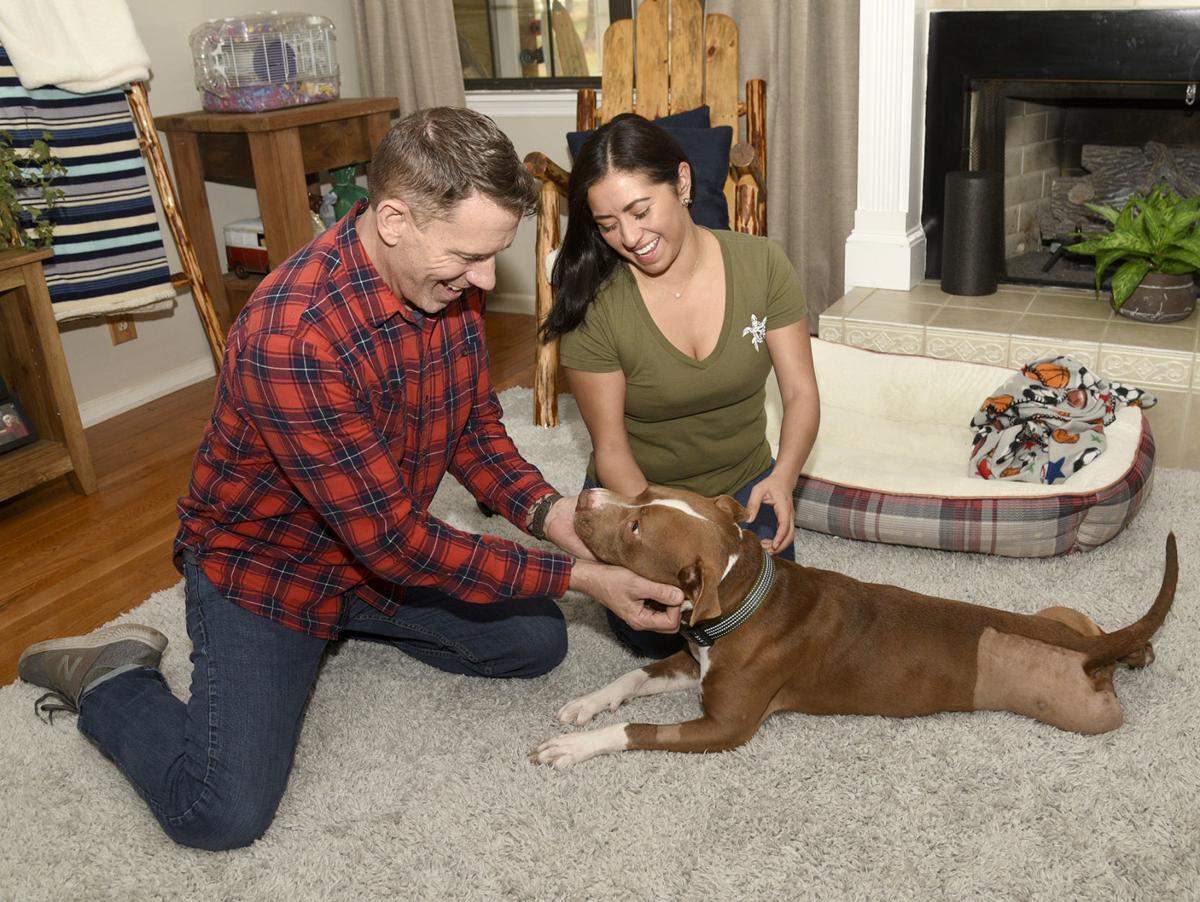 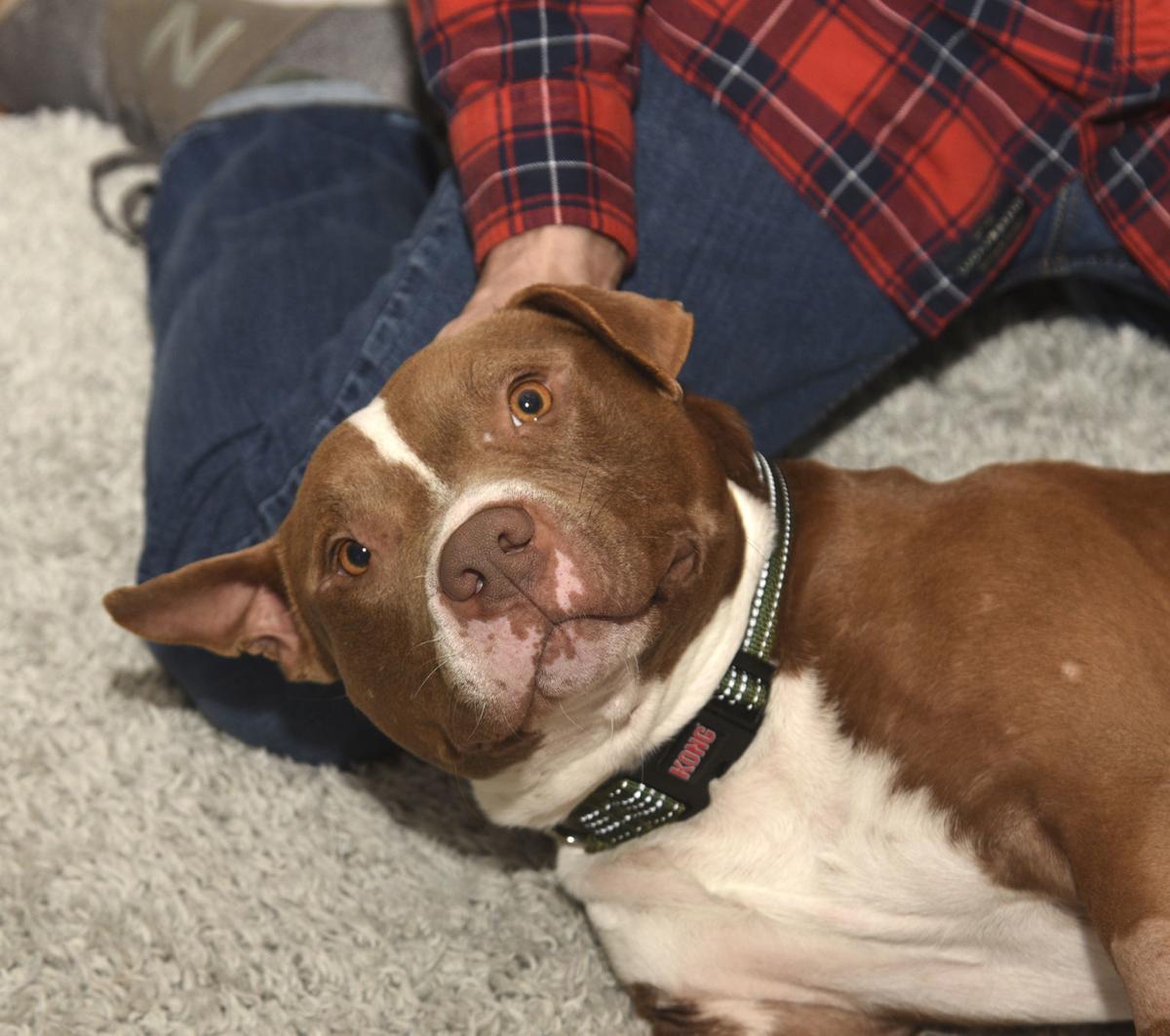 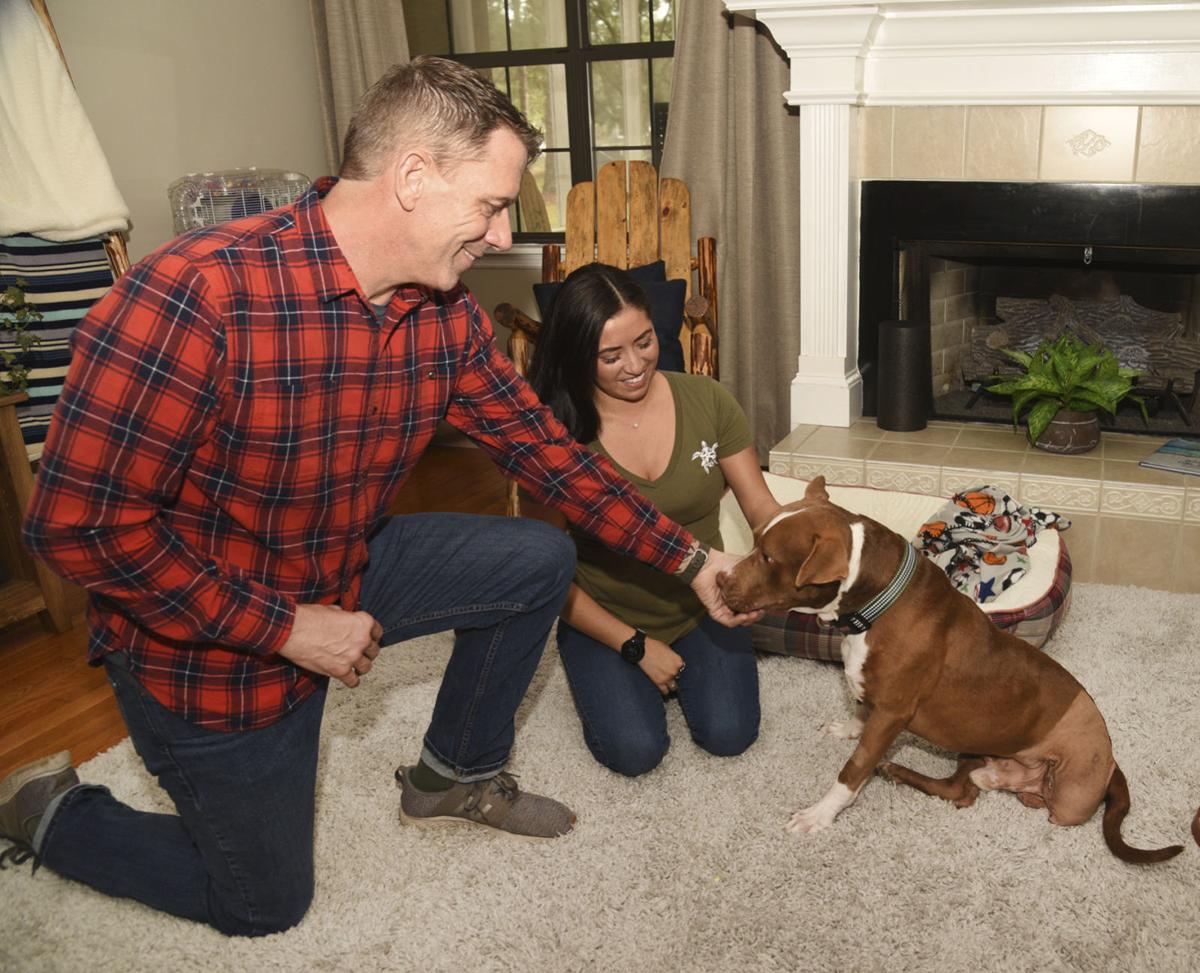 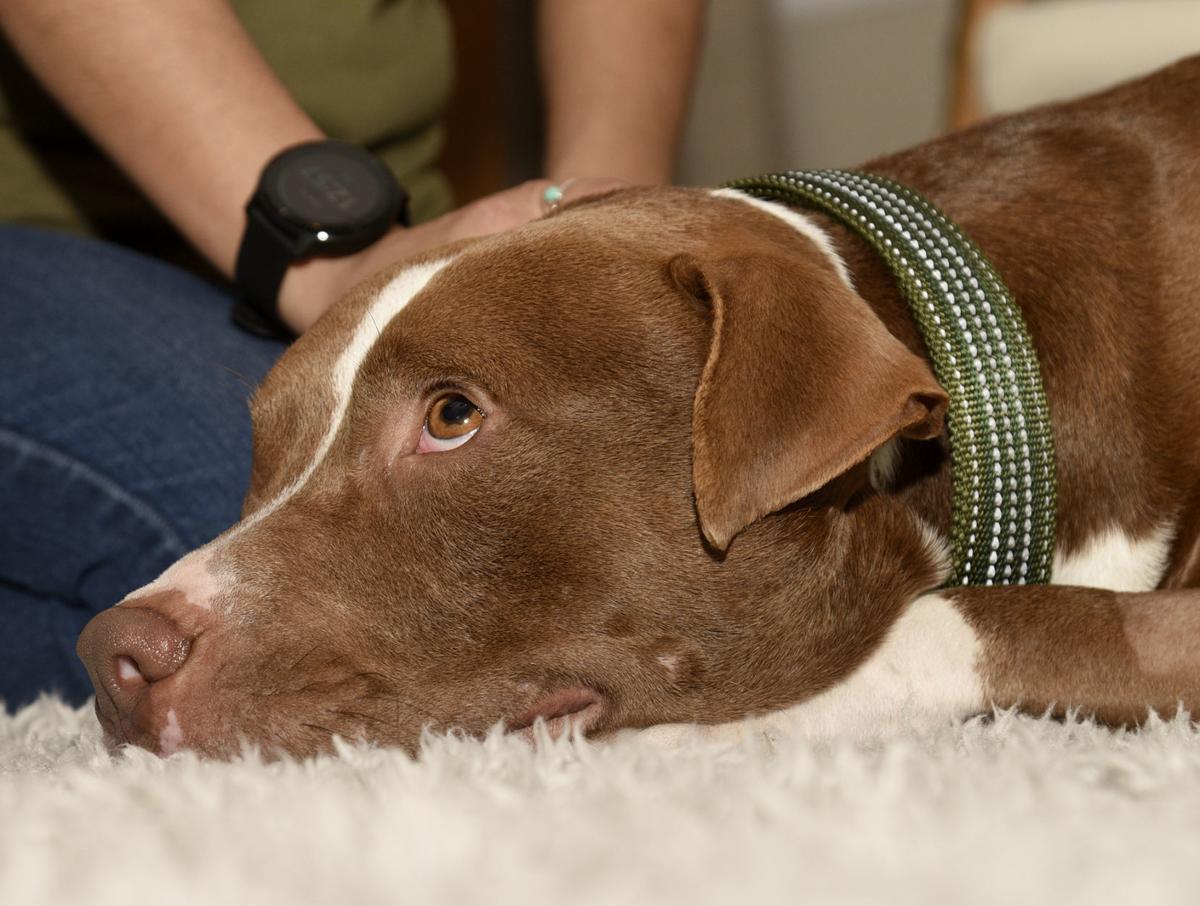 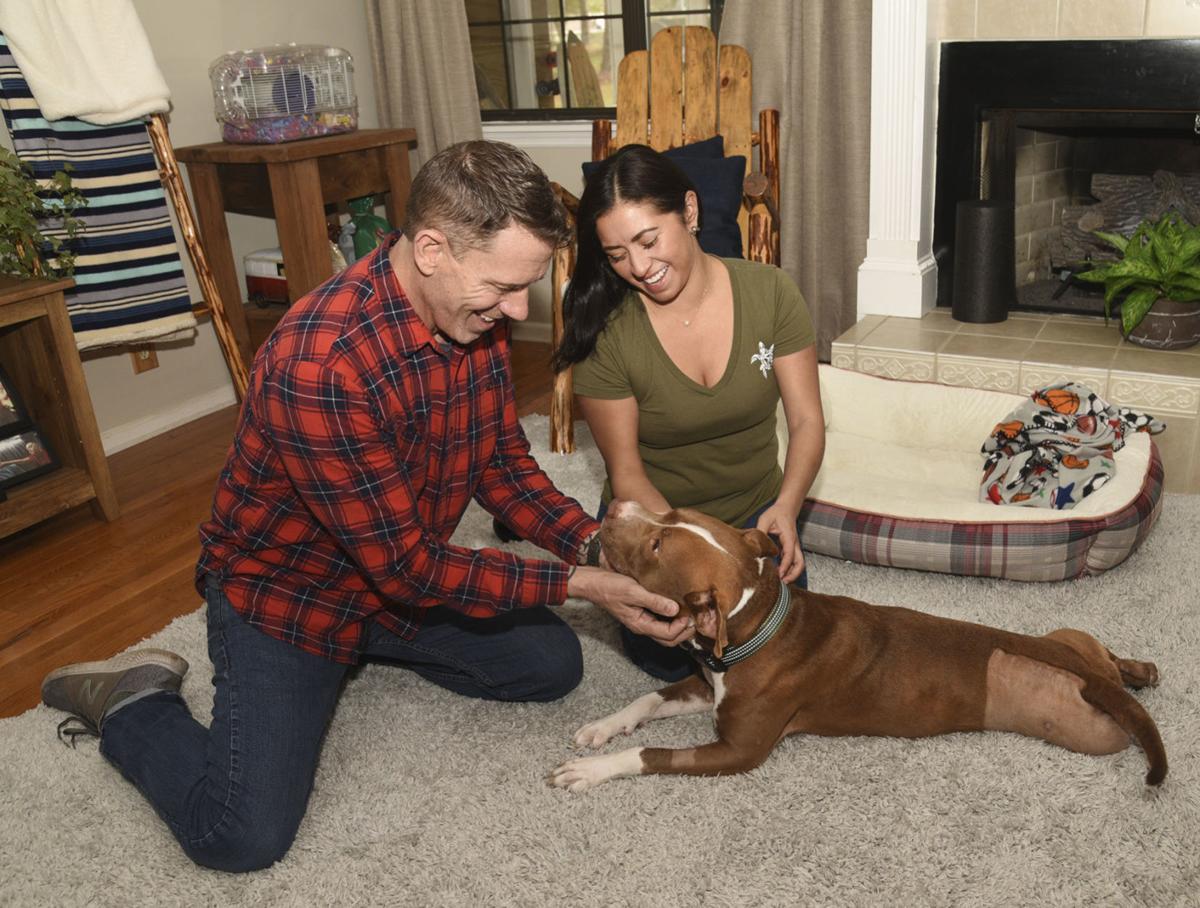 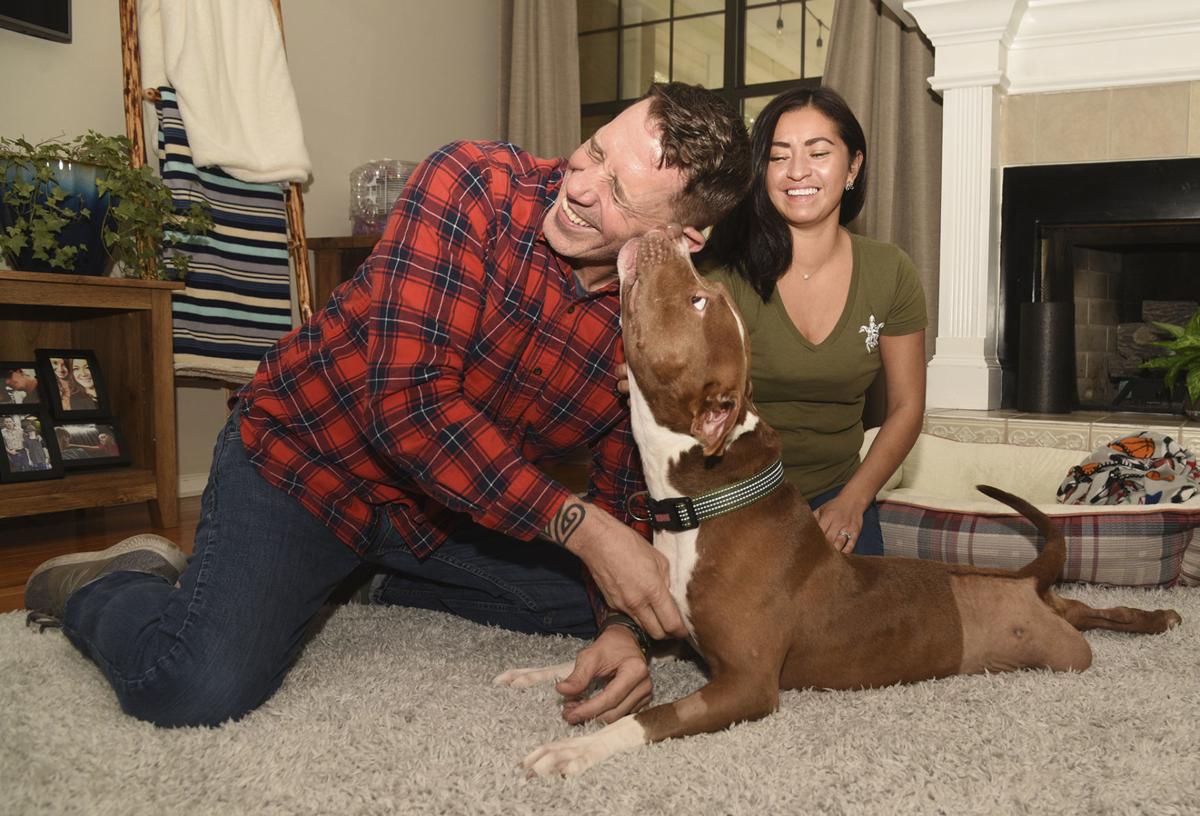 The doorbell rang and the eager host bounded to the door. He was so excited by the prospect of visitors that he couldn’t slow his pace, bumping his snout on the glass pane.

But he was undeterred. Once the door opened, Thom was all wiggles and wags, as he welcomed his new best friends into his home.

Tasha Williams beamed. It wasn’t too long ago that Thom, a stout bulldog mix, was living on the streets. And what he found there was nowhere near the warmth and cozy kindness he has discovered with his new family. In fact, he experienced some of the worst humanity has to offer.

Thom was found by Glynn County Animal Control in early January. Some heartless someone had shot him in the backside, most likely as he was trying to escape.

“It shattered his hip ... it was out of socket and smashed,” Rob Williams, Tasha’s husband, explained. “I saw the X-ray and it was just horrific.”

The injured pup endured unimaginable agony before being discovered by Glynn County Animal Control. They assessed his situation and were set on getting him the help he needed.

“Everyone has told us that they couldn’t believe how sweet he was, even in all of that pain. He’s such a good boy,” Tasha said, cradling the pup’s head in her lap.

Knowing that Thom, who the county staff had taken to calling Winchester, would likely need surgery, they reached out for help. Veterinarian Jim Rich at Darien Animal Hospital stepped up to the plate. Sadly, the doggie’s leg was too damaged to be saved.

“Dr. Rich took on the amputation and did a great job,” Rob said.

Of course, a surgery of that magnitude takes funds. Luckily, the Coastal Animal Rescue Society (CARS), a 501c3, was another entity there to help. The nonprofit’s mission is to step in and help fund medical services for injured pets. For the members of CARS, this was a primary example of their mission.

“Like all rescue organizations we are limited by financial considerations. However, in Winchester’s (now Thom) case, we were pleased to contribute to expenses related to his surgery. As our chairperson Martha Grant likes to say, ‘It’s what we do,’” said Ron Fleury, CARS secretary and founding member.

“CARS was amazing ... they stepped in and paid for half of the surgery,” Tasha said.

“That’s when we found out, after the surgery,” Rob added.

The couple, who have two boys ages 16 and 11, were already considering getting a dog. And when the story started circulating on Facebook, Tasha knew they had found their fur baby.

“I tagged Rob in the post,” she said, grinning.

Rob was on board with getting a pet but was worried about being able to provide the care they needed. The family has a busy schedule, not the least of which is operating their paddleboard and kayak business — Turtle Tides.

“I’ve been putting off getting a dog because it has to be the right time and you have to be able to devote the attention to them ... it’s about the animal,” he said. “But when I saw this one I thought, ‘that’s it.’ We had to have him.”

But animal services was set on making sure this pup’s forever family would be the right fit. And they weren’t content to let the dog go with just anyone.

“I started the application process and (Tasha) didn’t know. But they called the next day and wanted to come do a site visit,” Rob said.

“An officer and representative came out and they checked everything — the house, the yard, they wanted to know where he’d be sleeping during the day and at night.”

“We were excited, but I was trying not to look too desperate,” Tasha added with a laugh.

After they discovered the type of loving home the dog would have, they were given the all clear for the adoption.

“We were so excited,” he said. “Just thrilled.”

The family went to pick up their new pup, whom they renamed Thom.

“We like to give animals human names. And we didn’t want to be reminded of him being shot,” Rob said. “So we went with Thom with the ‘h’ to make it kind of fancy.”

While it took Thom a bit of time to recover from his surgery, the stitches were recently removed and he is well on his way to a fabulous “tripod” lifestyle. In fact, the family has to slow him down to make sure he doesn’t overexert himself, as he easily zooms from point A to B.

“He is actually really fast and gets around really well,” Tasha said, throwing a ball Thom sprinted to retrieve.

The couple watched as he frolicked in the yard, they reflected on what a gift he has been to their family. And they encourage anyone thinking about getting a dog (or cat for that matter) to explore adoption.

“Adopted dogs are just so grateful. You can tell. We are grateful for him and he is grateful for us,” Tasha said, petting Thom, who enthusiastically wagged his tail in agreement.

“It’s like they know (they were saved), and they’re with you forever,” Rob said.

While it’s not a traditional romantic story, the tale of Thom, the rescue tripod, is one that can offer hearts hope and love this Valentine’s Day.

The start of a fresh year is always an ideal time to re-evaluate one’s life. While it’s true for goals like eating healthier and losing weight, it can also be part of a spiritual evolution.

The doorbell rang and the eager host bounded to the door. He was so excited by the prospect of visitors that he couldn’t slow his pace, bumping his snout on the glass pane.

Like most photographers, David Wright likes to see his work published, in an exhibition or on the screen.

Special dinner to serve up lots to love

The color of Valentine is red and one of the finer restaurants in the Golden Isles gets the color and taste of the day into a special dinner.

Life has dealt Sheryl Middeke some harsh blows recently. In the course of two years, she lost both her husband and her mother in a series of heartbreak.