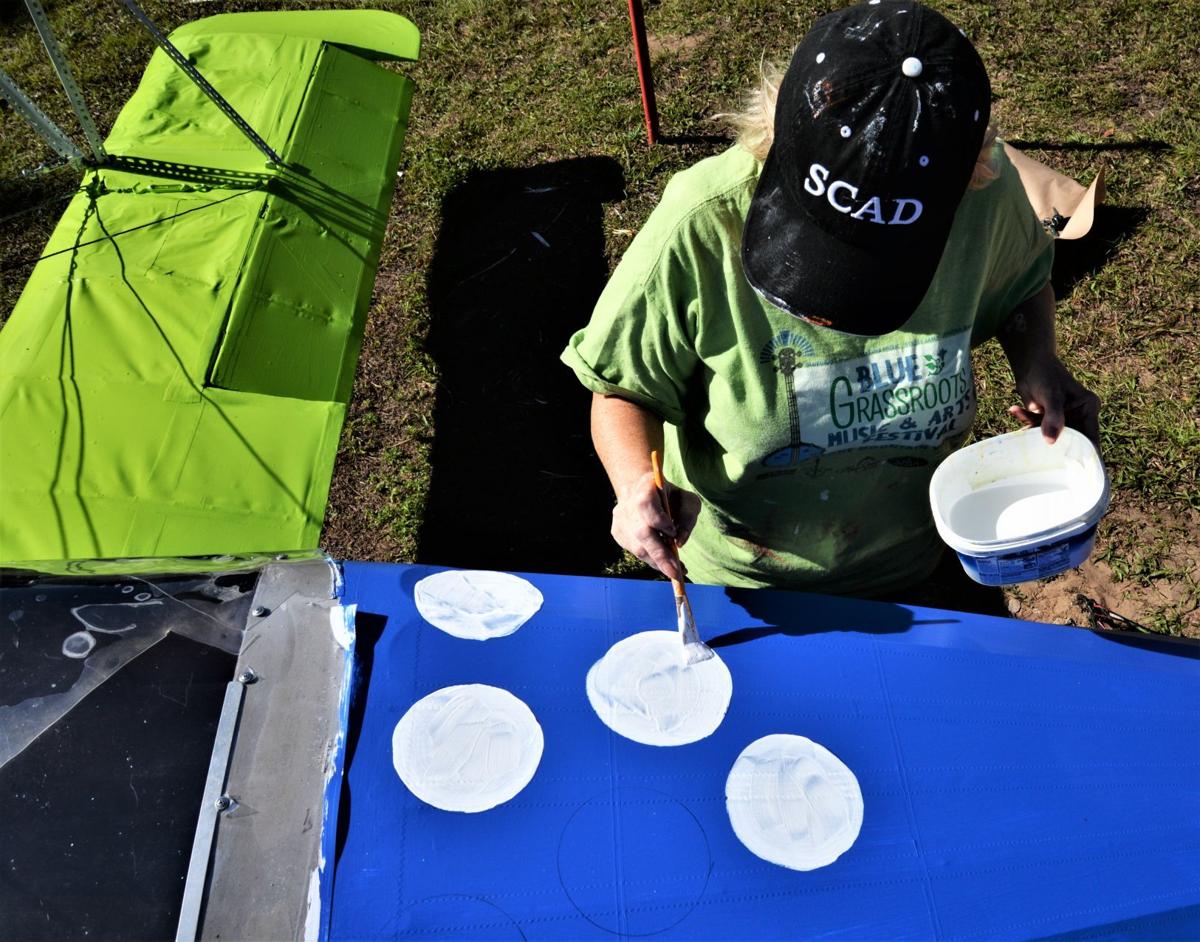 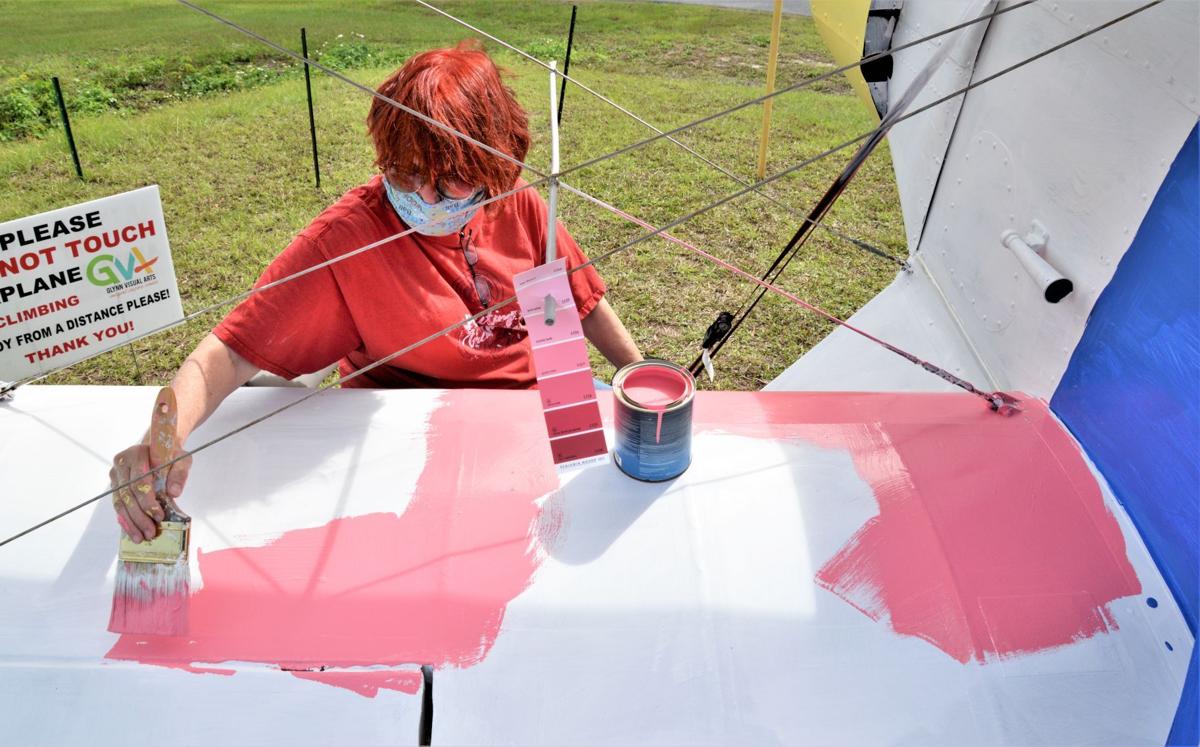 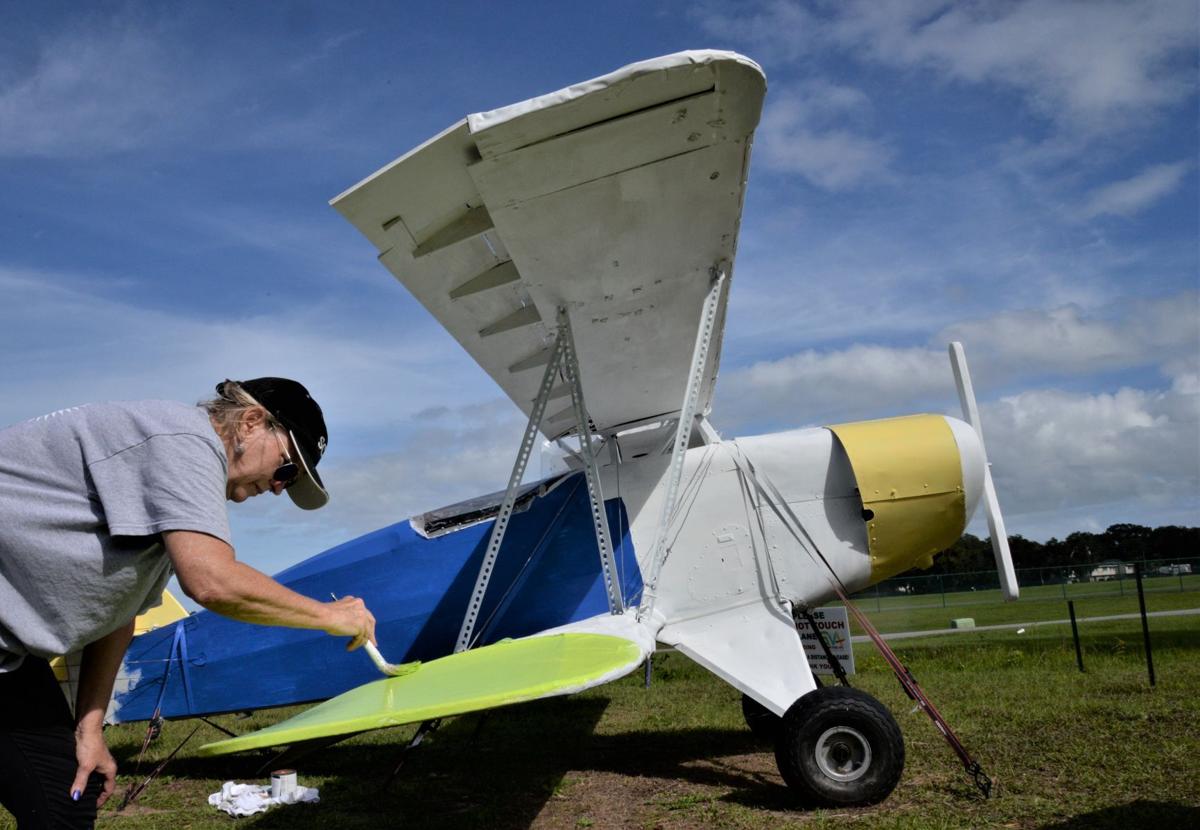 Susan Ryles paints the topside of a wing pink. 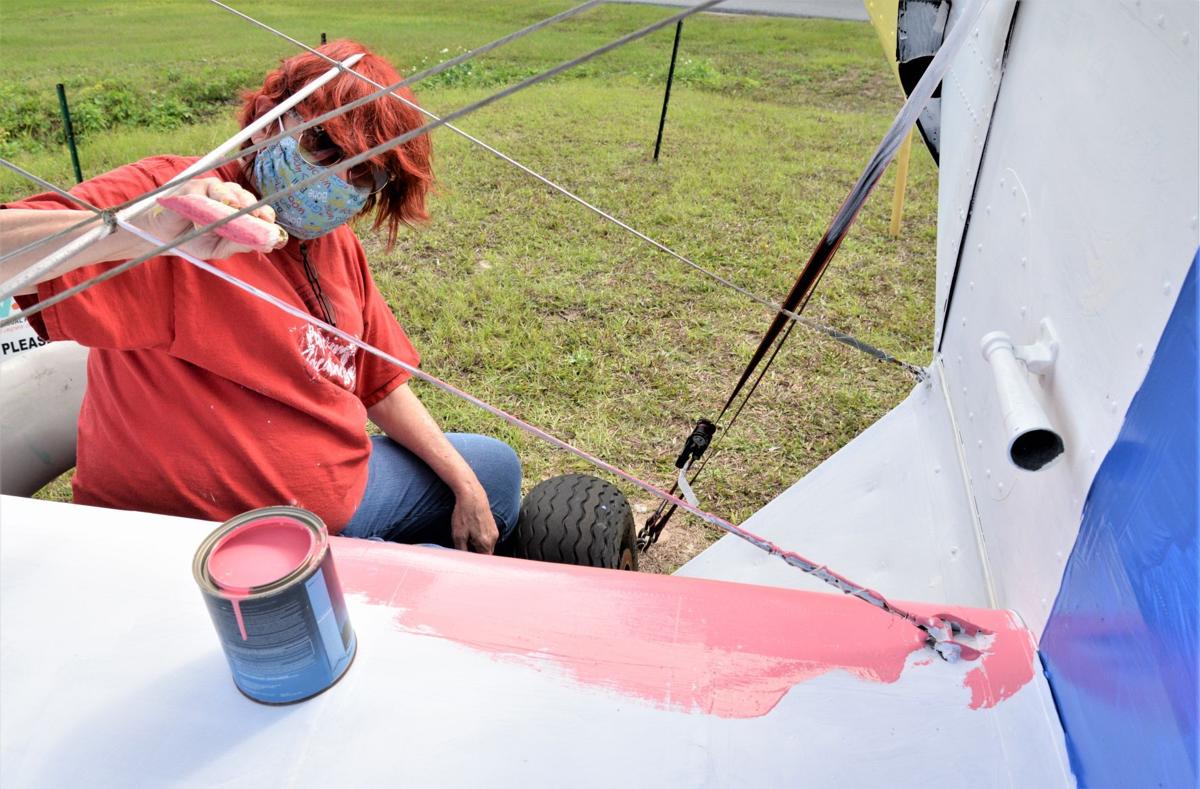 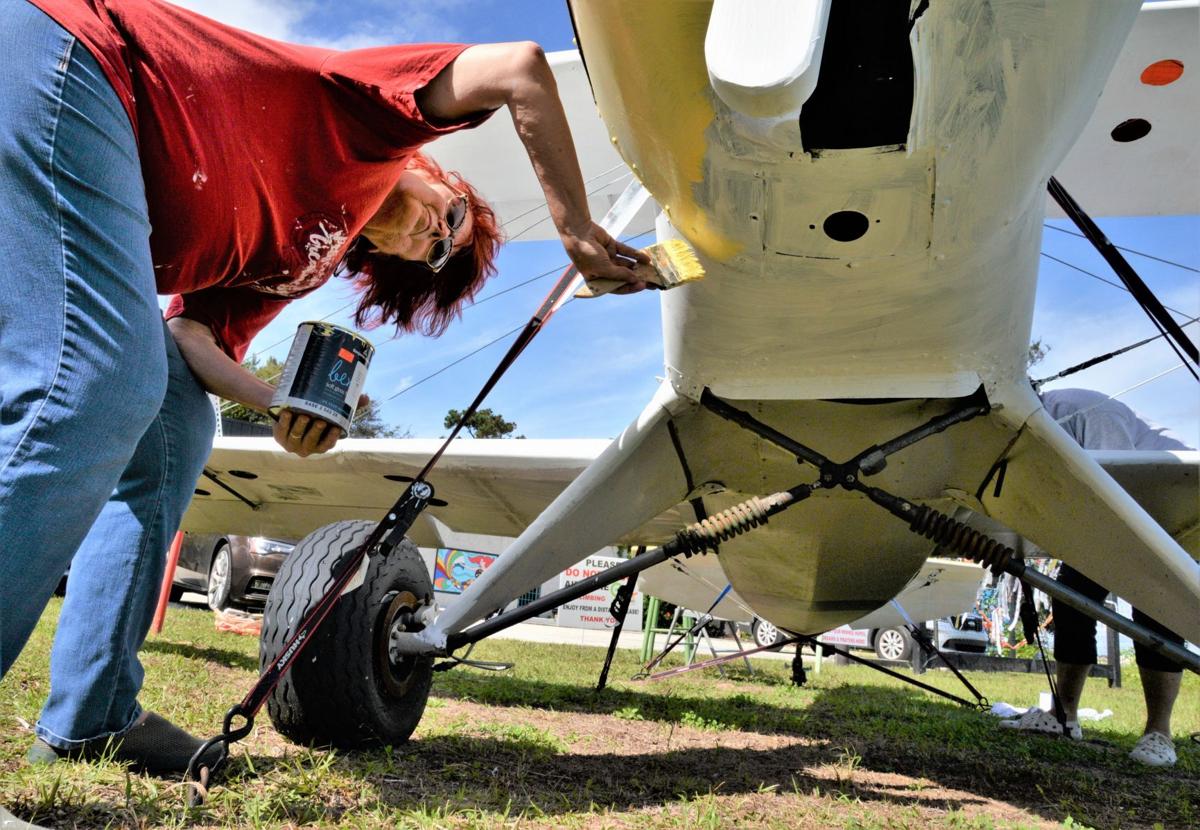 Leigh Kirkland reaches under the nose of Glynn Visual Arts’ replica of a WWI Spad 13 that she and Susan Ryles are painting. 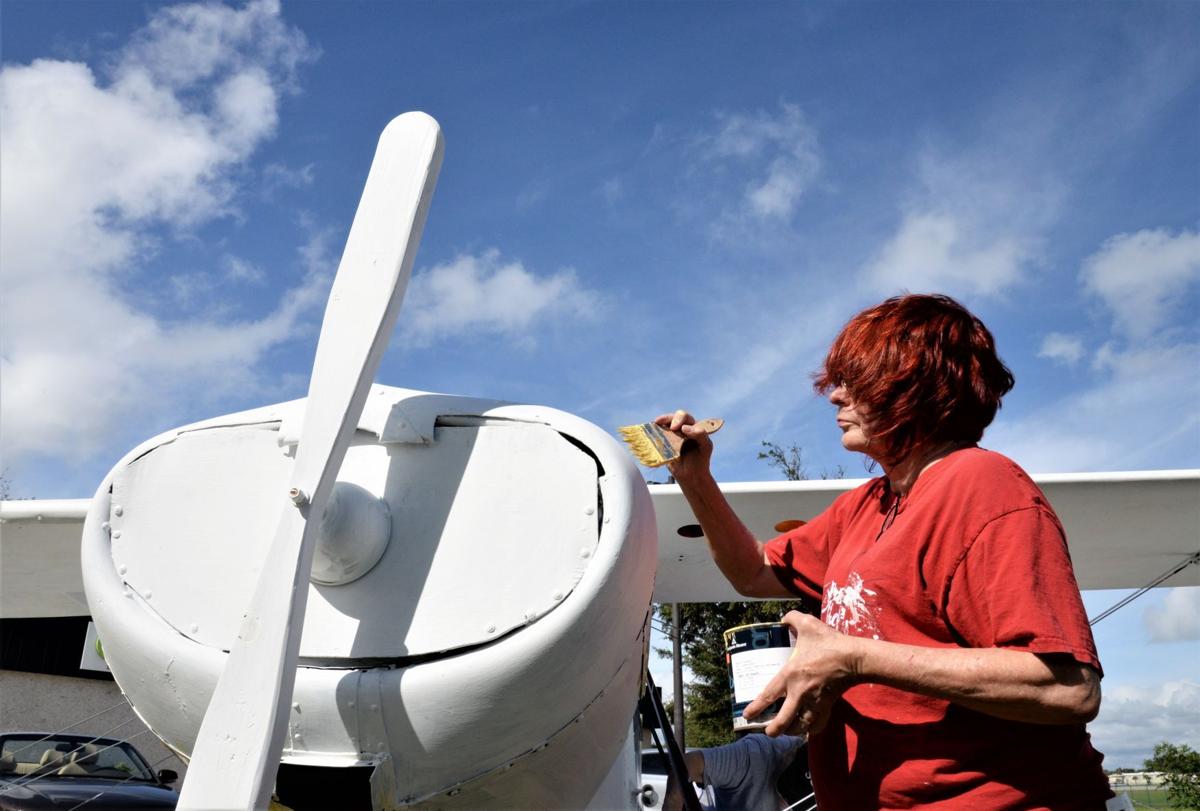 Susan Ryles paints the topside of a wing pink.

Leigh Kirkland reaches under the nose of Glynn Visual Arts’ replica of a WWI Spad 13 that she and Susan Ryles are painting.

There’s plein air painting and there’s plane art painting. In a flight of fancy, two members of Glynn Visual Arts gave a replica of a WWI biplane that sits in front of the organization’s studio a colorful coating of blue, yellow, pink, purple, orange and turquoise paint and, if that wasn’t enough, added white polka dots over it all.

Susan Ryles and Leigh Kirkland said they’re wielding the brushes because they had a vision for the replica of a Spad 13 that has been sitting in front of the studio since spring.

The plane landed to give the studio more visibility.

“We were brainstorming about what we could do to make the place more visible,’’ Ryles said.

Board member Betty Oliver mused, “Wouldn’t it be great if we get someone to donate an airplane.”

Oliver put the word out and someone responded with the offer of the Spad 13 replica, but it had some problems. It came without a propeller and a wing was missing. Roger Malcolm built a wing out of plywood and braced it and fashioned a wooden propeller. Members patched up some sizable holes on a lower wing with tape and closed in the open cockpit.

“Paint covers up a multitude of sins,’’ Ryles said. “It doesn’t have to fly as long as it kind of looks like an airplane.”

It looks exactly like an airplane, at least from the road, and center Executive Director Terri Evans said the plane could serve a number of purposes, but the first is easy.

“Frankly, I think the role of the airplane for the GVA is to be a bit of fun. These days we need all the cheering up we can get,’’ she said.

In a double entendre, Evans said it serves as a “prop”plane for now.

“Right now, it’s for fun. We love the attention it brings to us on a street level,’’ she said.

But she and the painters have some ideas. Although the current coat of paint is durable, Ryles figures it won’t last.

The plane, which has a fabric skin, could become the canvas for an annual art project, perhaps for a muralist or an abstract expressionist painting in the style of Jackson Pollack. Evans said it could be the subject of a contest, although it’s too early to say how it would work.

The most recent coat went on nicely because it already had been primed.

“We’re just now getting to it because the weather’s been so hot,’’ Ryles said earlier.

On Thursday, she and Kirkland began adding white polka dots using an old CD for a template.

The plane is obviously not airworthy, but Ryles said that doesn’t matter. Given the coastal winds, the plane is anchored fast to the ground where it will stay.