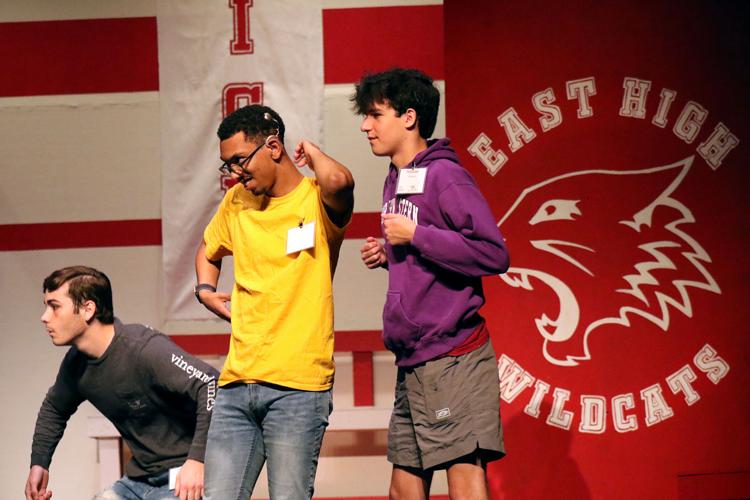 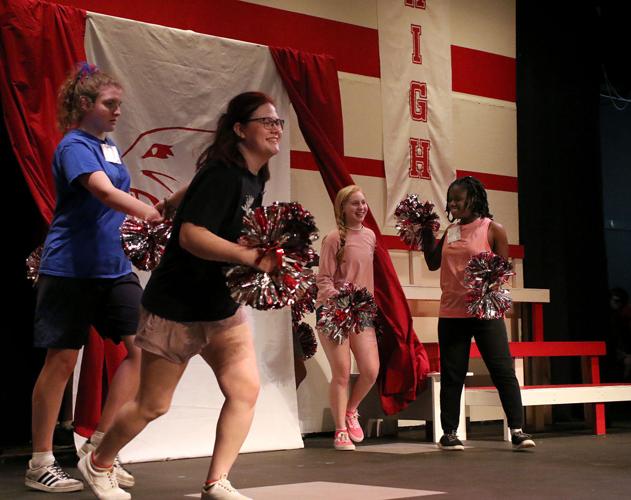 Caroline Hanna, from left and Anna Brown, rehearse a scene with Asheligh Franklin and Taniya Thomas. 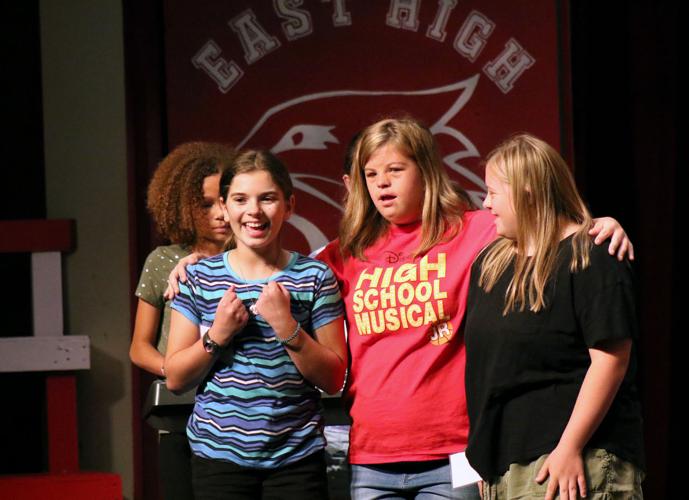 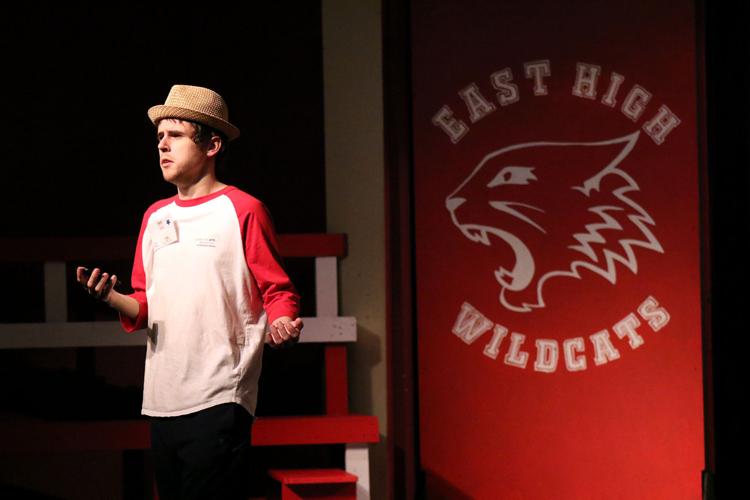 Will Ours performs during a rehearsal for the Golden Isles Penguin Project.

Caroline Hanna, from left and Anna Brown, rehearse a scene with Asheligh Franklin and Taniya Thomas.

Will Ours performs during a rehearsal for the Golden Isles Penguin Project.

A flurry of red, white along with pops of silver pom poms, swirled through the lobby of the Ritz Theatre in downtown Brunswick Monday evening. Excited young voices squealed and laughed, as friends giddily greeted one another with heartfelt enthusiasm.

The excitement was palpable, as one would expect on the eve of any stage production — but there was even more eagerness at this scene. Afterall, it was the eve of the opening of the Golden Isles Penguin Project, and everyone — from artists to mentors to staff members — was brimming with energy.

The Penguin Project pairs actors with different forms of disabilities with mentors to stage a show each summer. It has become a deeply beloved tradition for the community over the past five years. For the cast, each year is special but there was a certain buzz surrounding this year’s incarnation — “High School Musical.”

It’s something that’s been a long time coming, according to Emmeline Griffith.

“I’ve excited for this one specifically because it’s been canceled twice. We were able to do a review show during the pandemic and then ‘Bye Bye Birdie’ last year, but we’ve all been waiting for this one,” she said.

Emmeline, 14, has been a mentor for the past four years and feels like everyone is thrilled to share it.

“I think everyone is excited about it,” she said with a grin.

Cecilia Wheatley, 12, agrees. After hearing about the show from a friend, she decided to check out “Bye Bye Birdie” last year.

“I saw all the artists and thought it would be cool to do,” Cecilia noted with a nod.

While some, like Cecilia, are new to the show, other participants are seasoned Penguin Project Professionals. Bec Flowers, 24, is playing Susan this year and is now in her fifth year of performing.

“I’ve been doing it a long time. I make new friends,” Bec said with a smile.

Daniel Jackson is another veteran of the show. He’s participated in every one. Along the way, his skills and roles have evolved.

“This is my first time playing a father in one of these shows,” he said with a laugh.

Over the years, Jackson has become a leading cast member and has built deep bonds of friendship with other participants. The show, he feels, even takes on a bit of a magic that’s difficult to describe.

“I’m not so sure I can explain why people should come see the show. But we do have a lot of fun,” he said. “I hope people who come enjoy it.”

Like Jackson, Brantley Kate Jones has become a local star. She has participated in the Penguin Project since 2017 and is a senior this year.

“It’s been an amazing program for me. It has helped me grow and has helped me come out of my shell. It even encouraged me, for the first year, to do public speaking this year,” Brantley Kate said. “It’s inspiring with the friendships and the mentors. The directors, Ms. Heather and Ms. Lisa, have put on amazing shows with amazing groups of people. I’m very grateful for that. I won’t stop believing because of what they’ve done.”

The show is equally important for the mentors who volunteer their time to help the actors with their roles. Kylie Davis, 18, was initially prompted by her mother to join the project six years ago but it has since became a major part of her life.

“It is a lot of hard work but it means so much to everyone. There’s a lot of growth that happens,” Davis said. “Theatre is a magical process anyway but doing it with such amazing people and those who don’t always get a chance to do it is even more special.”

Anna Brown could not agree more. The 23-year-old mentor has formed a close bond with her artist, Caroline Hanna, 17.

“She has the first line of the show this year,” Brown said, beaming with pride.

That’s a huge deal for Caroline, who has non-verbal autism, she adds. And she has noticed how much of a difference the process has made over in Caroline.

“She loves the dancing and she’s grown so much. Saying that line takes a lot of courage,” Brown said, gently holding Caroline’s hand. “But I love this show and I’m so glad I get to hang out with her. I’ll do it as long as she wants to do it.”

While the productions are — by all accounts — incredible performances, the boost the shows offer the artists is often life changing. From helping them form new friend groups to inspiring confidence, there is an enormous amount of change that happens in the theatre.

For Heather Heath, executive director of Golden Isles Arts and Humanities and the show’s director, it’s the most rewarding production she’s done.

“There is no other feeling like it,” she concedes. “We have 34 artists and 32 mentors on stage this year — two of our artists are flying solo — and they all are doing an amazing job and it shows on stage. Our team has done an outstanding job as well. We can’t make it happen without the creative and supportive talents of everyone involved.”

As with years past, Heath is expecting a packed house at each of the four shows, beginning this evening. The cast will take to the stage at 7 p.m. tonight, Friday and Saturday. There will also be a 3 p.m. show Sunday.

“We are grateful for the support of so many in our community and encourage anyone that has not experienced a Penguin Project production to join us at the Ritz this weekend,” Heath said.

“Not only is it a really good show, but the passion that our artists and mentors have for sharing their talents is palpable.”

The Golden Isles Penguin Project will present Disney's High School Musical Jr. at 7 p.m. Thursday, Friday and Saturday. There will also be a 3 p.m. show Sunday. All shows will be at the Ritz Theatre in downtown Brunswick and hosted by Golden Isles Arts and Humanities. Tickets are $15 for member adults and $10 for seniors. They're $20 for non-member adults and $15 for seniors. Prices increase by $5 on the day of the show. Tickets for students with ID are always $5. For details, visit goldenislesarts.org.