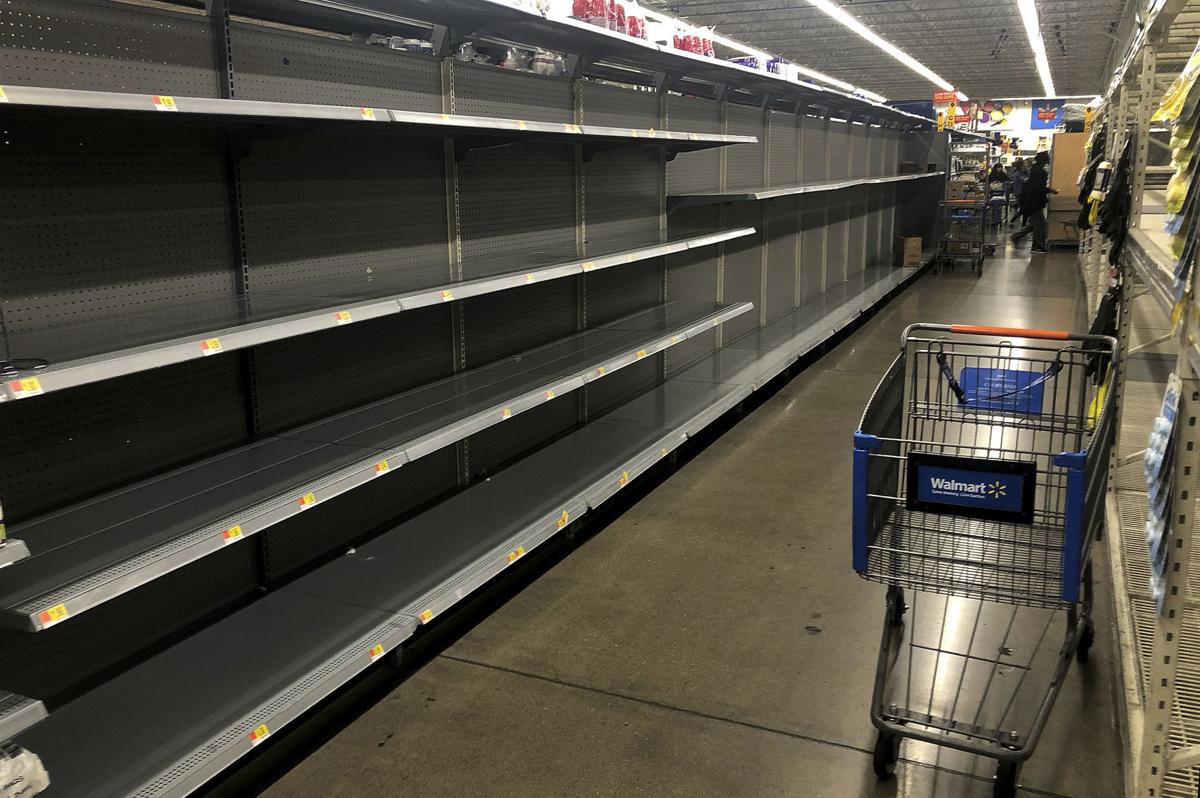 This photo shows the toilet paper aisle with empty shelves at Walmart on Friday. 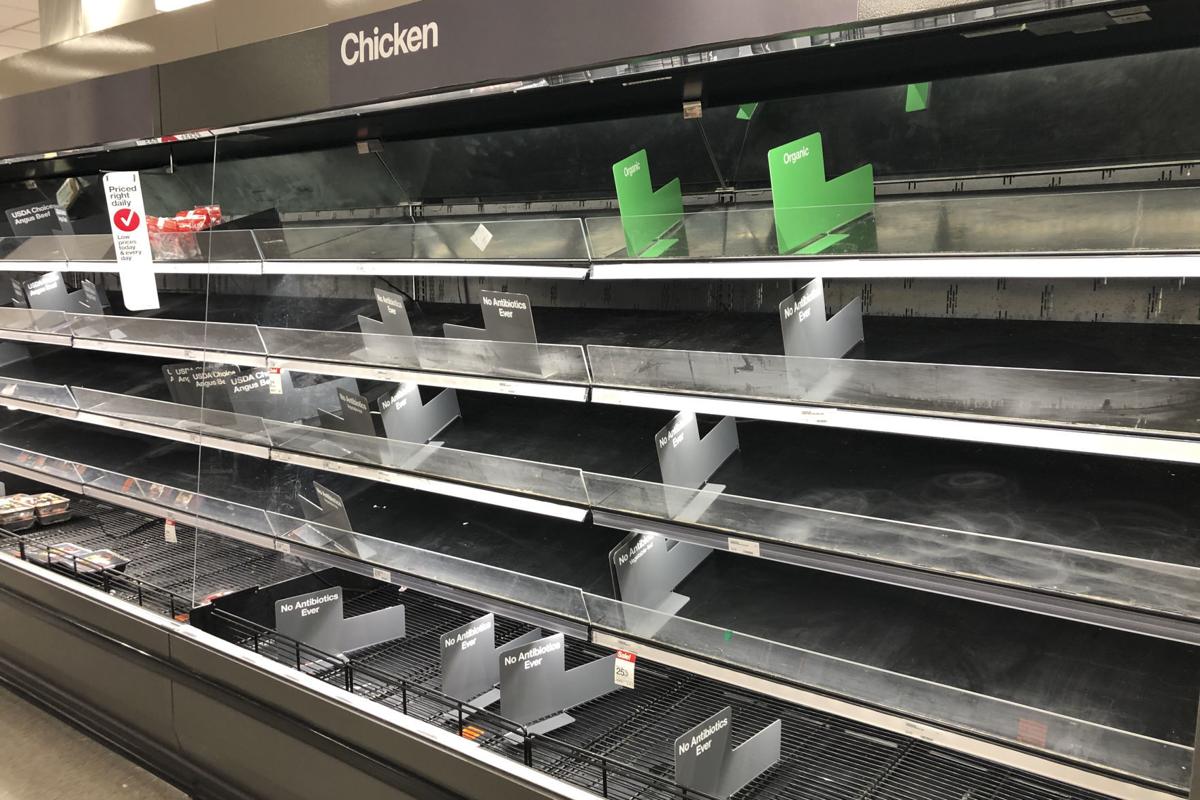 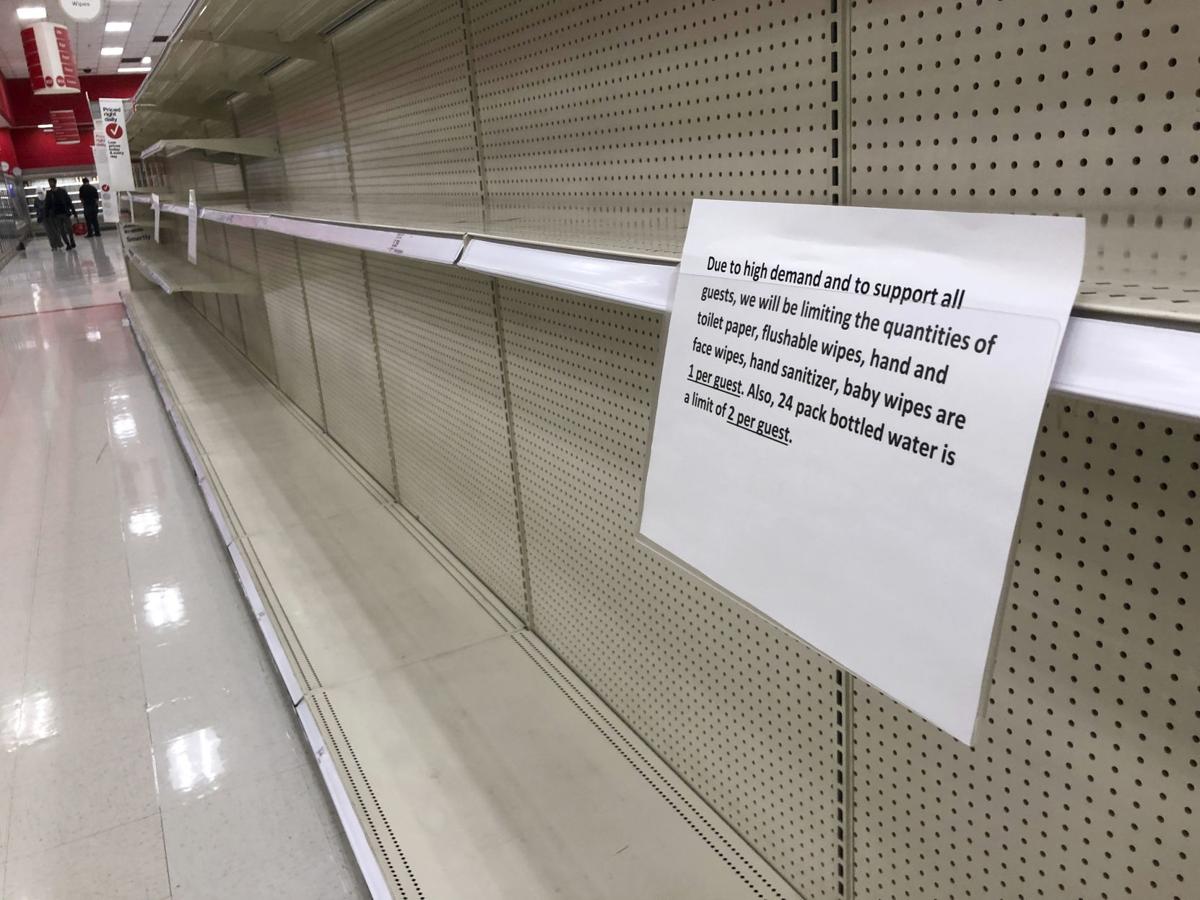 A sign hangs on the empty shelves to tell shoppers the limit on purchases of certain products, in a Target store Tuesday.

This photo shows the toilet paper aisle with empty shelves at Walmart on Friday.

A sign hangs on the empty shelves to tell shoppers the limit on purchases of certain products, in a Target store Tuesday.

My quarry is elusive, fickle and 2-ply.

No matter how desperate the situation appears, single-ply is not an option. On that we remain firm. We have standards, even now. Even now, when common sense appears to have been wiped clean. Even now, when reason rolls away.

But it has been four days on the hunt, with nothing to show. You get solid info that is has reappeared in its natural habitat, aisle 15 at Winn Dixie. But you get there only to find gaping empty shelves. “It’s gone,” says Wes, the friendly manager, shaking his head in awe. “It was here earlier. For about two seconds. Then … “

“There will be more on the truck tonight,” Wes says. There was. And, just like that — poof.

Then. Whispers from a friend of a friend purport to have heard about a sighting at Harris Teeter. Plenty for everybody, the story goes. And I hopped in my car and headed that way, gripping the steering wheel with white knuckle intensity all the way.

I pull into the parking lot and hop out of the car; stroll straight to the designated section inside Harris Teeter. And, nothing. Nothing but barren empty shelves.

Was it ever really there?

This is not supposed to happen. Sure, when hurricanes are closing in batteries and bottled water are in short supply. I get that. And Spring Break and summer vacations can always cause beer, soda and decent ice cream to run thin on an island community like St. Simons. It comes with the territory.

But this? When have we ever done without? It is always there in our grocery stores, department stores, even the corner convenience store in a pinch. I’m a Baby Boomer, dadgummit. A spoiled American.

I don’t have any Depression-era stories to tell about making do with corn cobs or being thankful for pages of the Sears and Roebuck catalogue.

My whining found a sympathetic ear in Randal Morris, senior public affairs manager for the Georgia-Pacific paper mill here in Brunswick. They make the stuff, right here in the U.S. of A. This is not some Made in China product that might suffer supply side setbacks due to a pandemic or some other worldwide calamity.

Heck, Georgia-Pacific makes it right here Georgia at its Rinkin plant on the Savannah River. It also makes this necessary product south of here in Palataka, Fla., he said

But Morris has been in the paper business a long time. Nothing compares to the premium this simple, functional item presently holds on the American populace.

“I can’t speak for the whole history of the company, but I would say we’ve never seen anything like this,” he said. “But these are unusual times.”

Unusual indeed. There is, of course, the coronavirus pandemic that has brought schools, businesses, events, large gatherings and everyday activities all kinds to a screeching halt. We have been advised to wash our hands, and wash them good. The term “social distancing” entered the American lexicon seemingly overnight. Georgians are urged to take myriad precautions to avoid spreading the disease.

But no government health agency — from the CDC to the Coastal Health District in Savannah — has suggested that citizens should pillage the nation’s toilet paper supplies.

“There is no reason to go out and stock up on toilet paper as a response to covid 19,” said Sally Silbermann, public information officer for the Coastal Health District.

If she had to guess, Silbermann suspects folks fear that stores may close soon amid the growing restrictions imposed to contain coronavirus, which causes covid 19. “I really do think people are worried stores are going to be closing up,” Silbermann said. “And when people start buying things up, other people think there’s not going to be any more so now they want it too.”

“Just in case, pick up some more next time you’re at the store,” Wylie suggested, almost an afterthought.

Of course, there was none to be had. Not the first day. Or the day after. “Still no luck?” she said.

My honor as a provider suddenly felt threatened. “We’ll get some, don’t worry,” I said, tersely.

And just like that I joined the masses in this hysteric quest. By Monday, it was looking grim. Walking across the Winn Dixie parking lot to my car, empty handed once again, I saw my buddy Quincy rounding up shopping carts. Nothing can breach that man’s smile. It is an infectious smile.

But I told him my troubles anyway. “Truck’ll be here early tomorrow,” he said, grinning beneath his Winn-Dixie cap. “Call around 7:30. Get here early.”

Good advice from a good man. I called at 8 a.m., scarcely concealing my frantic concern. “The truck. Is it there?” I asked. “The one with the toilet paper?” The sweet receptionist transferred me to the shipping department in the back.

I rushed out the door in tie-dye T-shirt shirt, shorts and flipflops. Then I caught all 200 years of the red light at the turn from Sea Island Road to Demere Road. But soon I was parked in the WD parking lot and moving toward the door.

The shelves on aisle 15 were still empty. But there was a wooden pallet beside it on the sales floor, stacked shoulder high in paper products. Folks had already picked items off the top. All I saw within reach was paper towels. Then, underneath, still trapped in plastic wrap, I spot that adorable winged cherub: Angel Soft. It’s a nine-pack: “230 + Sheets Per Double Roll,” the packaging boasts. And, yes, it is 2-ply.

I ripped through the plastic wrap and seized the booty, uh, prize. I left triumphant, three packages under my arms. Thirty-six rolls in all.

Later on I talked to Morris, who assured me America is not running out of toilet paper. “Our inventory levels across our system remain healthy,” he said. “In fact, last week we shipped out a 20 percent increase in production in just one week. We’re getting it out the door just as fast we can produce it, and we have ramped up our production.”

Still, he does not disparage folks like me for freaking out about the whole thing.

“People are looking to make sure they have the essentials taken care of in this crisis,” he said. “Toilet paper is obviously an essential.”