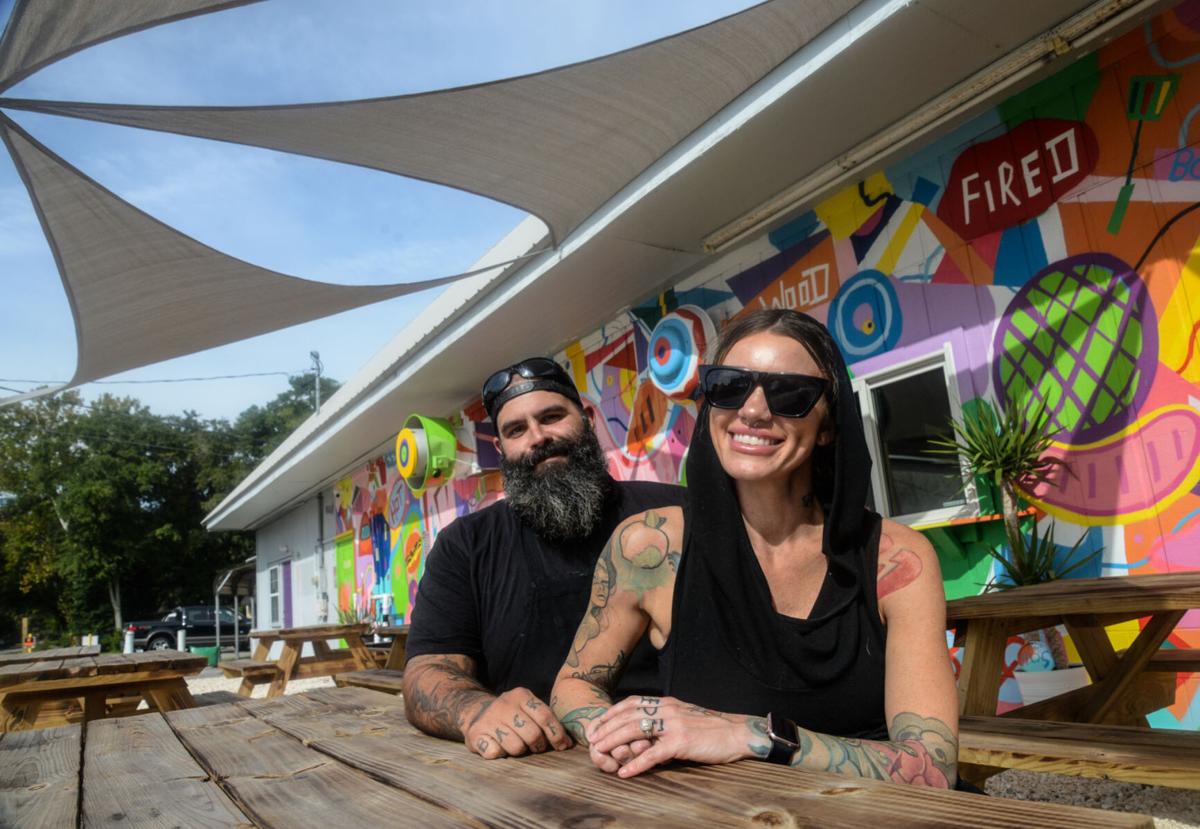 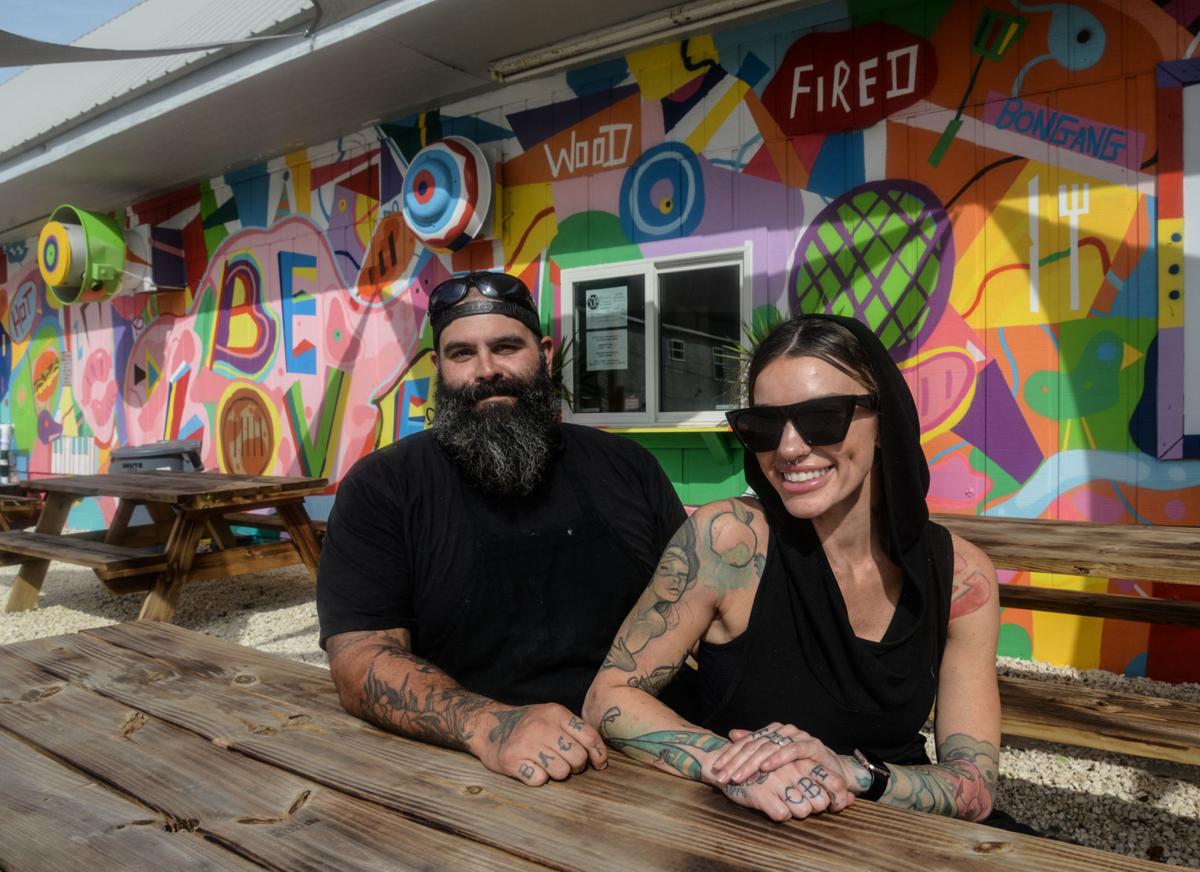 At first glance, you automatically assume Judd and Kate Foster are not into barbecue possibly because there’s no white apron stained orange with sauce. They both wear the black favored popularized by Japanese steak houses, and she seems to favor something with a hood.

Then you look at the barbecue from “South of Heaven,’’ their restaurant on Altama Avenue across from College of Coastal Georgia and realize they do indeed serve barbecue, but it’s not like anything you’ve had before. And if you miss a dish this week, you may have to wait awhile before it comes around again.

Then there was the pua smash, two smashed patties with melted Swiss cheese, house made spam, griddled pineapple and teriyaki sauce.

Having grown up in Schenectady, N.Y., Judd Foster moved south and married Kate in 2015 at the King & Prince. He learned barbecue at Fox Brothers Bar-B-Q in Atlanta and from “one of the greats,” Bryan Furman owner of B’s Cracklin’ Barbecue on Atlanta’s west side.

But when he was working in the pit for someone else, the Fosters were operating a catering business that was good enough that Creative Loafing named them the best caterers in Atlanta in 2017.

“I got sick of carrying the kitchen everywhere,’’ he said, and they figured if they would be as good as restaurateurs as caterers so they opened “South of Heaven” out of the back of a laundromat in Carrollton. After a year, they realized that wasn’t going to work because they sold out by 12:30 p.m. and had no room to expand.

They moved to a big historic house and while there Creative Loafing named South of Heaven best barbecue in 2018 and 2019.

Then came COVID-19’s first surge and everything changed. With restrictions on capacity, they were down to one table per room in the rambling 6,000-square-foot space. It wasn’t working so they closed for two months and went to curbside takeout leaving them with 30 employees and no dine-in customers.

They decided to shut it down and find a location in Brunswick preferably downtown, but they settled on the space that had housed a lot of restaurants. Having moved to town in January, they remodeled it into a barbecue place and opened in July.

There were layers of signs,’’ Judd Foster said. He forgot to take one down that said “crusty crab, or something like that,” and “People thought we were a seafood restaurant,’’ Kate Foster said. They had a couple of employees, but like most other restaurants, they lost their workers and are running it themselves.

Having no employees makes for long work days. Judd gets up at 3:30 a.m. and by 4 a.m. is at the restaurant where the meat has been smoking for hour upon hour. That will later serve as entrees such as brisket and chopped chicken and pork. She follows with their son Charlie, 4, soon after, and then takes him to a private pre-K when it opens. Then, they work until 5 p.m.

He favors Texas barbecue and perhaps that’s why his brisket is the most popular entree.

If that seems unusual, it doesn’t stop there.

“I’m also doing a peanut butter and jelly taco but it’s Thai peanuts, smoked chicken and chili-grape jelly with pickled carrots, cilantro and a coconut fluff cream that goes on top,’’ he said.

As he says, “fusion barbecue.”

As for the pickles, he makes his own but it’s usually carrots and onions and not your standard cucumbers.

He also makes his own sausage that, like the menu, changes weekly.

“Our house sausages are starting to become a problem because I can’t make enough of them,’’ he said.

Recently he made a cheddar jalapeno and an Asian blend with soy and fresh ginger.

Since the Fosters are open only Wednesdays through Saturdays, the regulars miss their food. “I make a lot of sandwiches,’’ he said, and people can do it at home.

Take a portion of chopped brisket or chopped pork.

Top it with your favorite sauce.

Like most good barbecue restaurants, they make their own sauce.

They take suggestions and listen to complaints. One diner said her favorite comfort food was her mother’s stroganoff thus the white curried brisket stroganoff on this week’s menu.

The complaints include they aren’t open enough days or enough hours, but they spent all day at the restaurant Tuesday doing prep work for later in the week. Also, people complain about prices, but he notes that he cooks brisket and other ingredients 14 hours to make a consomme for tacos, so a lot of work goes into everything including the pickles and sausages.

They have misjudged a few things including he effectiveness of the artsy canopy they erected over the outdoor picnic tables. It not only doesn’t provide as much shade as they predicted, it offers little protection from the rain.

A family of about six were eating when they were hit by a downpour. They didn’t budge from their seats so he offered an umbrella, but they said they were find.

They told him they weren’t moving until they finished eating because the food was so good.

“There will be some sort of awning next year,’’ she said.