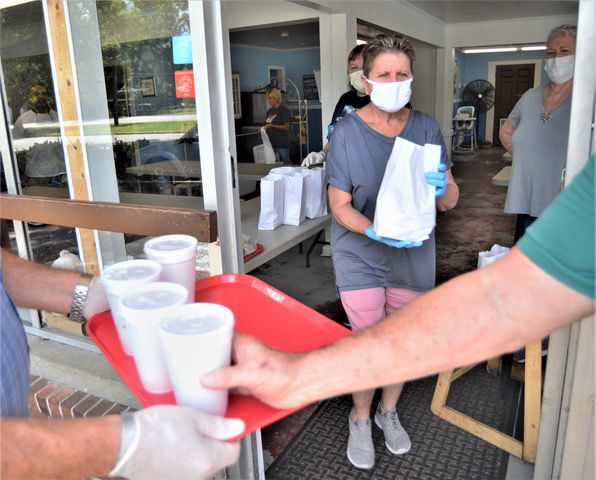 A lunch patron takes a cup of tea as Robin Pickren waits to hand out a sack lunch at Manna House. 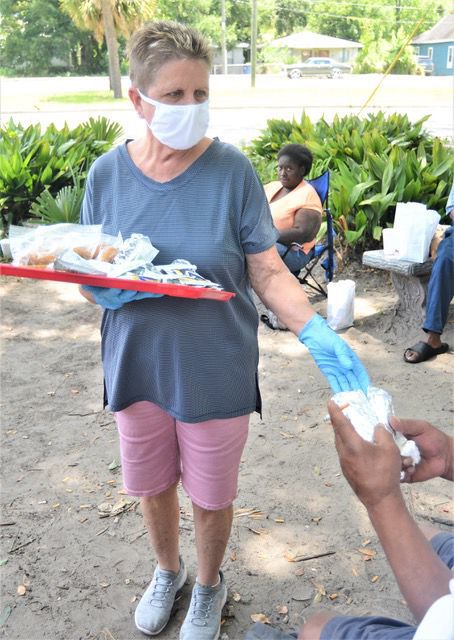 A lunch patron takes a cup of tea as Robin Pickren waits to hand out a sack lunch at Manna House.

Christians interpret the Gospel as commanding them to feed and clothe the poor.

During the coronavirus pandemic, churches and others that carry out those missions have had to provide help at arm’s length while the needy are leery of taking a chance of getting out to ask for help.

Sparrow’s Nest food pantry in Brunswick is open four half days a week, but had previously cut its hours to a single day each week, said Sabra Slade, who manages the pantry and coordinates benevolence for the arm of FaithWorks.

“We never shut down completely,’’ but instead closed its building at 2911 Altama Avenue and set up a table outside to provide food, she said.

“Interestingly, we’re seeing an uptick in new guests, people who have never been here before,’’ Slade said.

Unlike past summers, when the pantry shelves ran bare at times, Sparrow’s Nest has plenty of food and Slade said she has had to order food only a couple of times.

“The community has been incredibly generous,’’ she said. “I think in the past when school was out and people went on vacation, they didn’t think of us.”

This year, school’s out, but a lot of people are staying put and the needs are well known.

Also, even with food available, requests fell off, she said, and still aren’t back to the levels prior to March when stay-at-home and other guidelines were issued.

Sparrow’s Nest offered home deliveries but have only had a few requests. She believes that some former clients are instead availing themselves of the food provided by the Glynn County school board and the Boys & Girls Club of Glynn.

“When you do mass food distribution, the need for food diminishes,’’ he said.

Second Harvest is not a ministry, but some of its partnerships to get food to the hungry are churches and affiliated organizations.

Second Harvest has heldbi-weekly food distributions at College of Coastal Georgia and will hold its next one July 15 with help from the National Guard. Those who need food come through with grocery carts, shopping carts, wagons, on bicycles and in cars, she said.

The National Guardsman place the 25-pound food boxes wherever the recipient wants and they go on their ways with everyone keeping a safe distance, Morton said. The food boxes typically contain fruit, vegetables, protein and sometimes dairy products, she said.

“When the kids pick up their lunches to go, they also pick up their food box for their families,’’ along with a breakfast and dinner, Morton said.

With the schools closed, the Golden Isles Junior League and Christ Church are packing backpacks with food, she said.

Perhaps no ministry has changed as drastically as Manna House where alternating teams of volunteers formerly served hot meals to the hungry inside a former convenience store at the corner of Martin Luther King Jr. Boulevard and G Street.

Now the same team of about a half dozen volunteers comes every day and hands sack lunches and cups of iced tea out the front door, said Amy Crandall, who leads the team.

Crandall said they are seeing a lot of the same faces and some new ones.

“People are out of work. Kids are out of school. We feed more children,’’ she said.

Each meal includes two sandwiches, a bag of chips and a dessert. It’s been increasingly hard to fill the bags because donations are down, she said.

Because they’re making sandwiches, Manna House uses 34 to 40 loaves of bread each day and goes through a lot of hot dog buns, she said. They also use 500 to 600 zip lock bags per day.

The once steady teams of volunteers have stopped coming because almost all were older and considered at-risk should they contract the virus, she said.

And those who need the food don’t always appreciate the need for social distancing or masks. Many come early and sit within inches of each other as they wait for Manna House to open and they often sit down together in the shade outside the building to eat.

“Some of them get right up in your face,’’ said Robin Pickren who spoke through a mask as she handed out the last of some donated cheese sticks and the few hot dogs that were left.

The usual volunteers arrive at 9 a.m. and stay past 1 p.m. Some of the other volunteers have returned, but they work only in the kitchen to avoid exposure.

The goal is to provide a cold sandwich one day and a hot one the next. Manna House has appealed to churches to provide baked goods for desert, but they have to buy the meat and cold cuts for the sandwiches so they need cash donations, Crandall said.

Her father, retired minister Jim Crandall, is the comptroller of Manna House. Anyone who wants to contribute can make donations to 138 Cypress Run Dr., Brunswick, 31520.