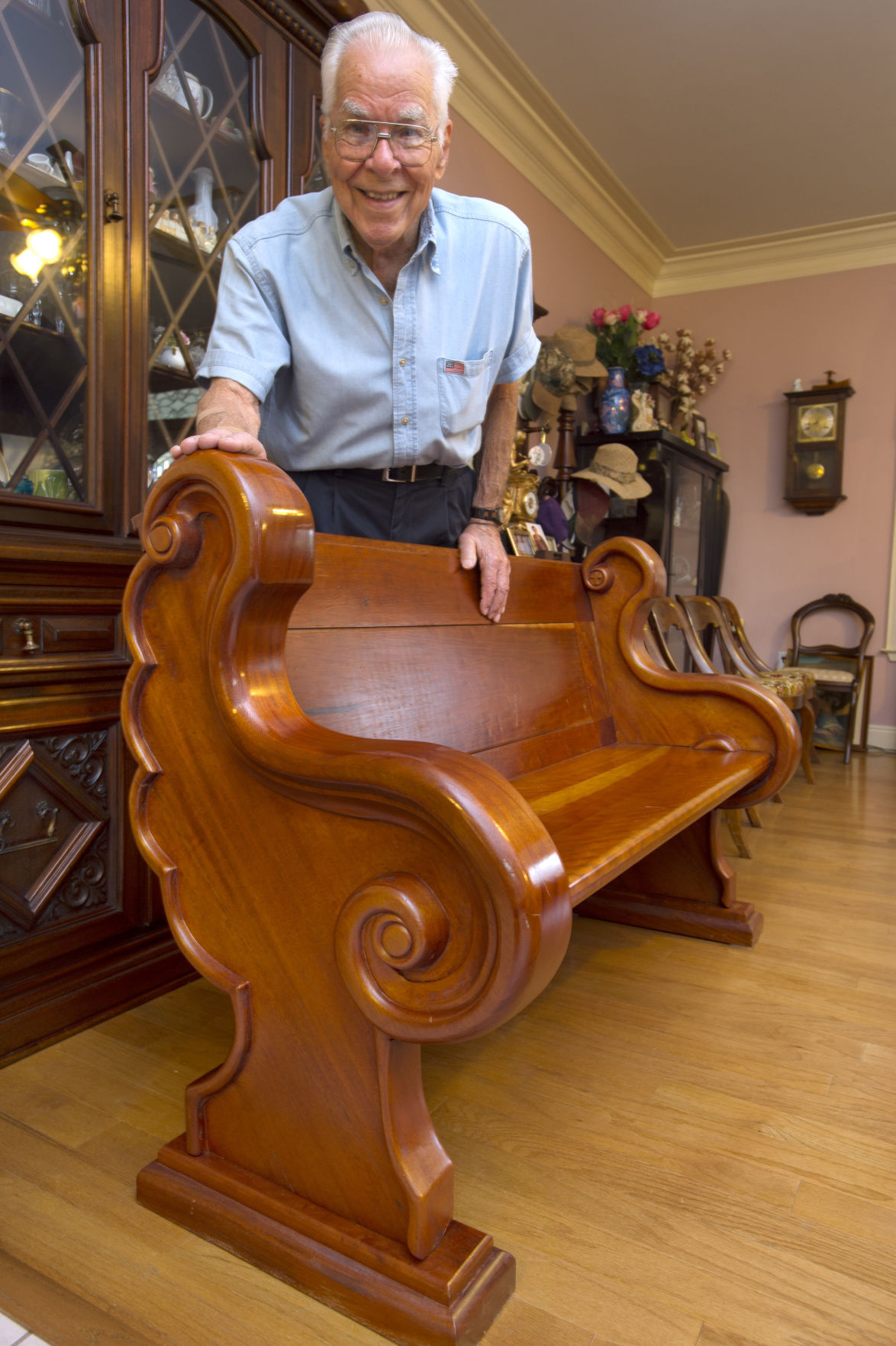 A church pew with beautiful lines carved by Central, La., artist J.B. Richard, 89, who modeled it after pews in a photo from New Orleans’ St. Mary’s Catholic Church, is shown. Made from scratch, it has a cherry seat and mahogany ends. 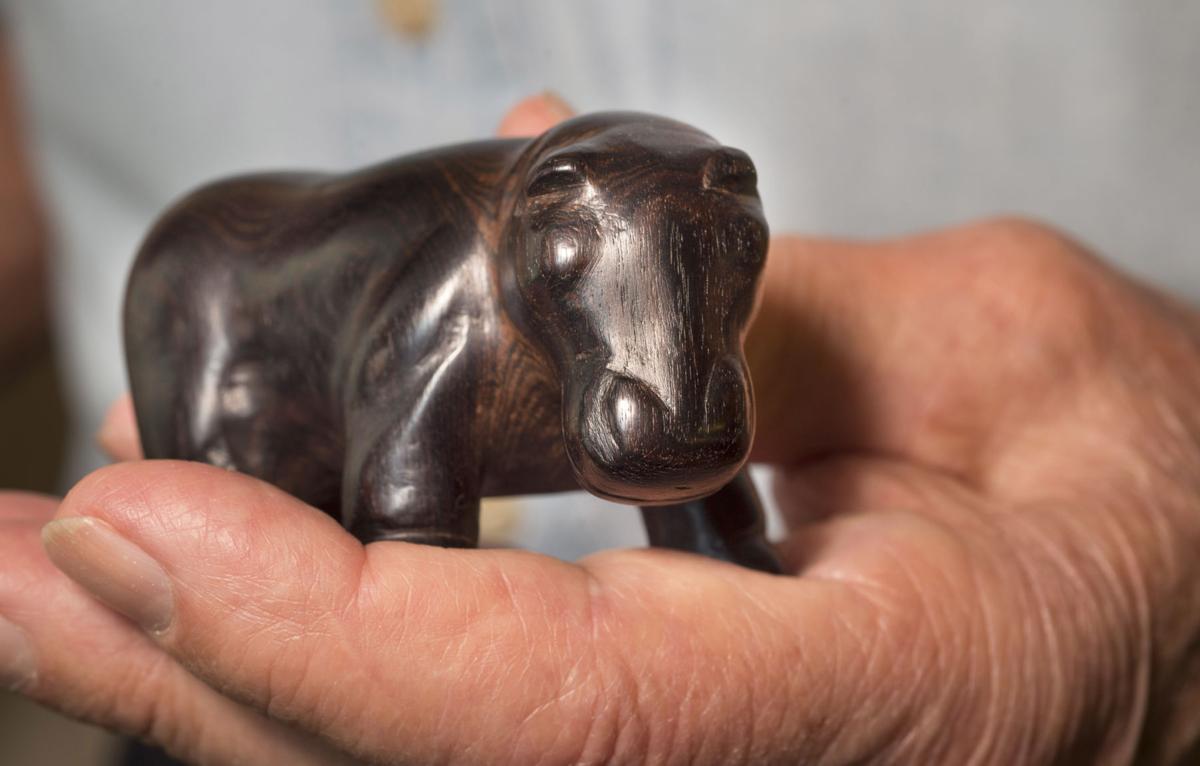 Central, La., artist J.B. Richard carved this hippo out of a piece of ebony, one of the hardest woods.

A church pew with beautiful lines carved by Central, La., artist J.B. Richard, 89, who modeled it after pews in a photo from New Orleans’ St. Mary’s Catholic Church, is shown. Made from scratch, it has a cherry seat and mahogany ends.

Central, La., artist J.B. Richard carved this hippo out of a piece of ebony, one of the hardest woods.

And when she died three years ago, so did his desire to finish his carving of Joseph and the Christ child. At least for a while.

Then, he turned 89 and inspiration returned in his memory of Grace’s words.

“You can do it,” she always told him, words that came to him when he looked at an unfinished church pew and the carving of Joseph and Jesus in the backyard workshop of his Central home.

Grace would have wanted him to finish the work. Still, there was something more to his motivation.

Both he and Grace were always strong in their Catholic faith, and many of Richard’s wooden sculptures reflect his love of family and God.

Richard donated one piece to St. Joseph’s Cathedral in 1993 following the death of Stanley Ott, who was bishop of the Baton Rouge diocese from 1983 until his death from cancer in 1992.

Ott had stopped by the Richards’ then-residence on Lorraine Street near St. Gerard Catholic Church to visit the Richards’ daughter, Mary, who had been left comatose after a 1986 automobile accident.

Mary eventually regained consciousness. But today, at age 54, she still lies in a hospital bed in Richard’s home unable to speak or care for herself. Richard and his wife were her sole caretakers. Now his other children help him.

Ott learned of Mary when Grace asked him to pray for their daughter after a church service.

The bishop decided to visit but would never meet Mary. The Richards weren’t home the day of his visit, so he attached his calling card to their front door. He died two months later.

Still, the gesture touched them, prompting Richard to carve from a teak slab a coat of arms depicting Ott’s life.

The piece hung in St. Joseph Cathedral for the 10th anniversary of Ott’s installment as bishop in March 1993, then was moved beside a display of the bishop’s vestments in the church’s community center.

“It’s still there, but I’ve been told that it’s in storage now,” Richard says. “They said I could stop by and get it.”

There’s no regret in his voice. Grace told him the piece was good, and his motivation was pure.

The subject quickly turns to other carvings as Richard leads a quick tour through his home, which is filled with his work.

There’s the hope chest made of Nigerian walnut and teak. It was created for Mary and juried in 2008 for an exhibit of work by Louisiana master artisans and craftsmen at the LSU Student Union Gallery.

Other pieces include his “Lamb of God” carving, a clock in an intricately carved case and a pipe organ that’s been converted into a desk.

Now his attention is on the church pew standing on the edge of his living room. It’s another piece inspired by Grace, based on the ornate pews in St. Mary’s Catholic Church in New Orleans’ Garden District.

“Grace loved those pews, so finally I said I’d make one,” Richard says. “The pews in the church are made out of one piece of wood. The seat and back on this one are made of cherry, and the ends are made of mahogany.”

Richard holds up a cardboard pattern he made from an end of one of St. Mary’s pews. With their curved backs and swirling edges, these are the showstoppers on the finished piece, each a work of art in themselves.

Not bad for a self-taught wood sculptor who one day decided to carve a man in a boat out of teak.

The boatman occupies a prominent place on a living room shelf, also carved by Richard. It’s rough compared to his latest work. The man sits in the boat grasping a double-sided paddle.

The boatman also represents the chapter in Richard’s life that began 35 years ago, when he realized his only hobby was drinking beer.

“I grew out of the beer drinking, but I don’t know why I chose carving,” Richard says. “I’d gotten some teak wood decking from a ship, so I decided to try.”

Grace began challenging him. They traveled, and she snapped a photo of a bas relief sculpture of Mary and the infant Jesus while on a trip to Rome.

She told her husband she wanted a wood carving of the image.

Richard carved the piece from a large piece of mahogany he purchased from a lumber yard. It’s the same piece he used for the church pew.

The bas relief hangs in Richard’s living room near his newly carved piece of Joseph and the Christ child, also made from the mahogany.

Grace wanted the Joseph piece to accompany the Mary sculpture.