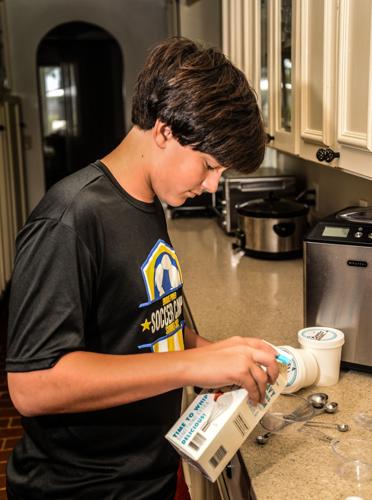 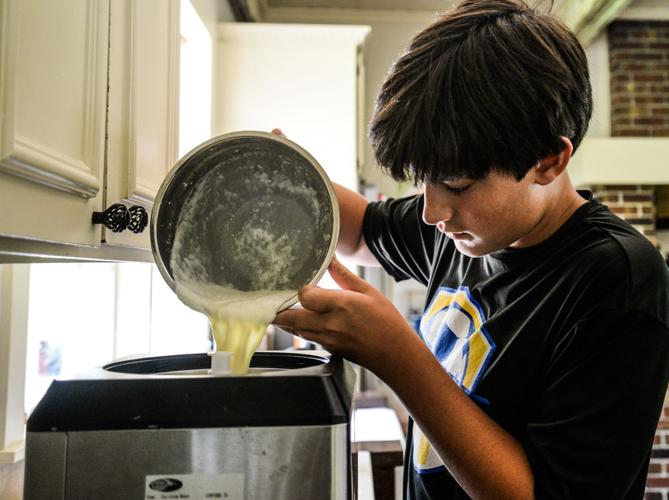 Sam pours the liquid into an ice cream maker to partially solidify it before adding strawberries sliced into small pieces. 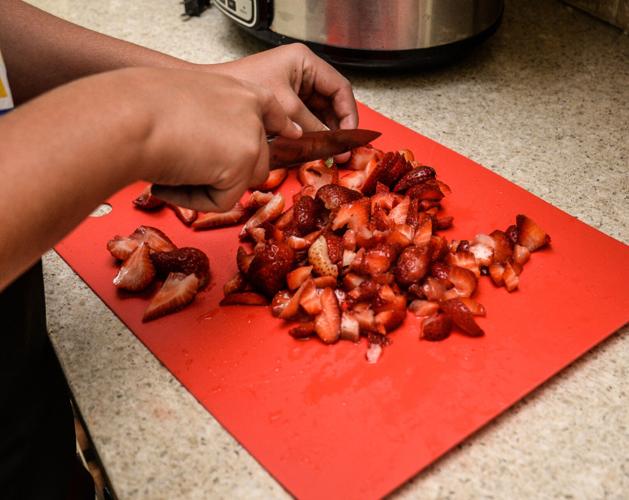 Slicing strawberries on the counter. 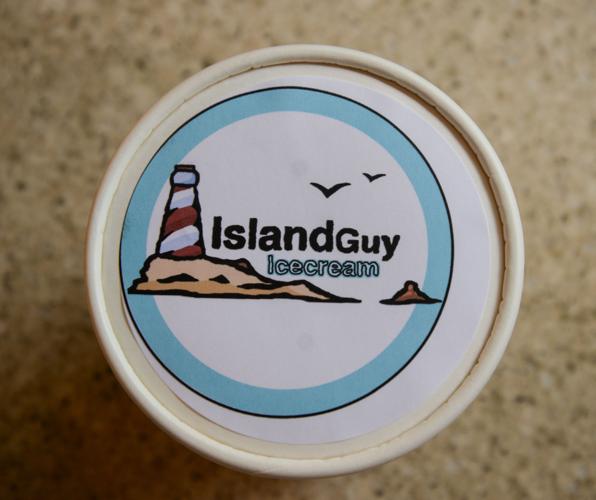 Sam’s brother Thomas handled the marketing, designing a logo for the two sizes of containers.

Sam pours the liquid into an ice cream maker to partially solidify it before adding strawberries sliced into small pieces.

Slicing strawberries on the counter.

Sam’s brother Thomas handled the marketing, designing a logo for the two sizes of containers.

A snap decision to buy an ice cream maker led Sam Weaver down a rabbit hole of refining his ice cream making process.

On the surface it’s simple — cream, milk, eggs and sugar plus the flavoring component. But refining the process has been a lot of trial and error, Weaver said. When a batch of ice cream came out a little heavy on the cream, he adjusted the milk-to-cream ratio until the recipe tasted right.

Coffee was a difficult one to get right initially but cheap to make — just add instant coffee.

He enjoys throwing flavors together and seeing what works more than the science behind it. You eventually get a feel for what food items might work best, and some have to be incorporated in a specific way, he explained. Through plenty of trial and error, he determined coffee mixed with Heath bar is his favorite flavor, which was not a surprise, as he’s a fan of both individually as well.

Fruit flavors are a good example of the effort it can take to get a batch just right. Many of the early batches turned out bitter, which he suspects is due to the produce being out of season. With fresh peaches hitting the market this summer, he’s made some good batches with local varieties.

When the ice cream first comes out, it is more the texture of soft serve. It takes a few hours in the freezer for a batch of ice cream to settle into something resembling the frozen treat most people are familiar with. Knowing one’s audience is key, as some prefer one or the other.

The next batch is going to be a Superman ice cream. It’s quite colorful — red, yellow and blue striped — but as many a parent has told their child in a sweet shop, it’s vanilla, vanilla and vanilla flavored.

Sometimes, the ingredients he can get his hands on may be limited. Mom will fill some requests during shopping trips to the supermarket, but otherwise Weaver has to make due with what he can find at the gas station down the road — a lot of candy.

Weaver likes making ice cream. It’s a lot of fun, he said. It’s engaging, allows for plenty of creativity and, once you’ve worked out the kinks, it’s a hobby that always rewards.

There’s one problem — it’s hard to step up production due to government regulations of homemade treats.

“You need a cottage baker’s license to sell it for money,” Weaver said. “I think you need to be 16.”

A cottage food operator is defined by the Georgia Department of Agriculture as someone who uses a “domestic home kitchen to produce products to sell directly to consumers.”

The license covers all varieties of breads, sweets, pastries, cereals and more. Selling directly to the consumers doesn’t include wholesale and the products can’t be shipped across state lines, which shouldn’t be much of an issue. Weaver’s mom Missy said he’s currently plenty happy using his hobby to build a solid reputation at Glynn Middle School.

“This is driven by 12-year-olds, whatever the flavors are,” Missy said. “He likes getting clout in middle school.”

At 13 years old, he doesn’t quality for the license. That’s not stopping him from making ice cream for others however. He’s swamped with requests from friends and family for eating at home or for parties. He’s not making a profit — they simply donate the materials or the funds needed to get the material.

When he can, though, Weaver will be ready. He’s even got the branding down. One of his five brothers, Thomas Weaver, helped with that. Island Guy Ice Cream is the name, featuring, as one might expect, St. Simons Island’s signature lighthouse.

While he plans to get his license and sell ice cream when he’s old enough, Sam Weaver doesn’t think he wants to be an ice cream maker as his job, but some form of culinary career is not out of the question. He enjoying working in the kitchen, especially on sweets more broadly and not ice cream specifically.

For a summer hobby, there are worse things to spend one’s time one, Weaver said.