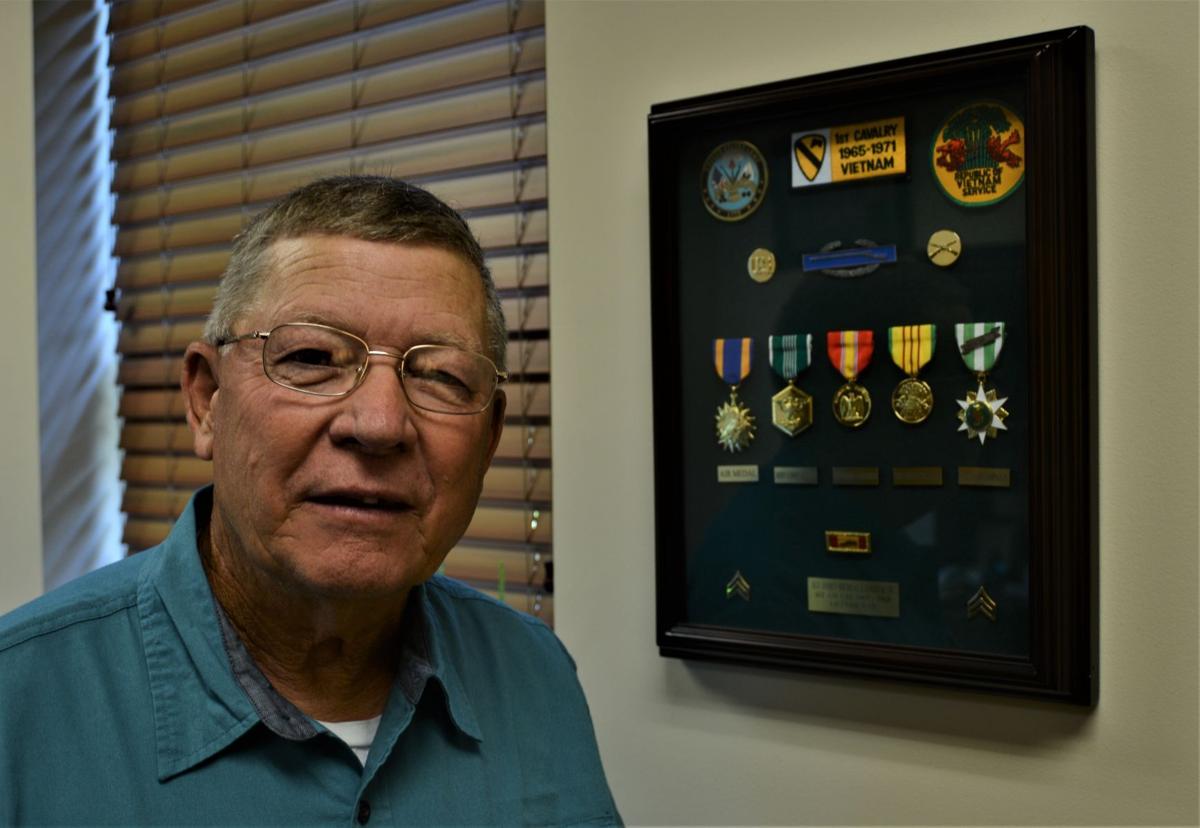 The Rev. Mike Landrum stands next to medals from his time in the service in his office at Bible Baptist Church in Brunswick. 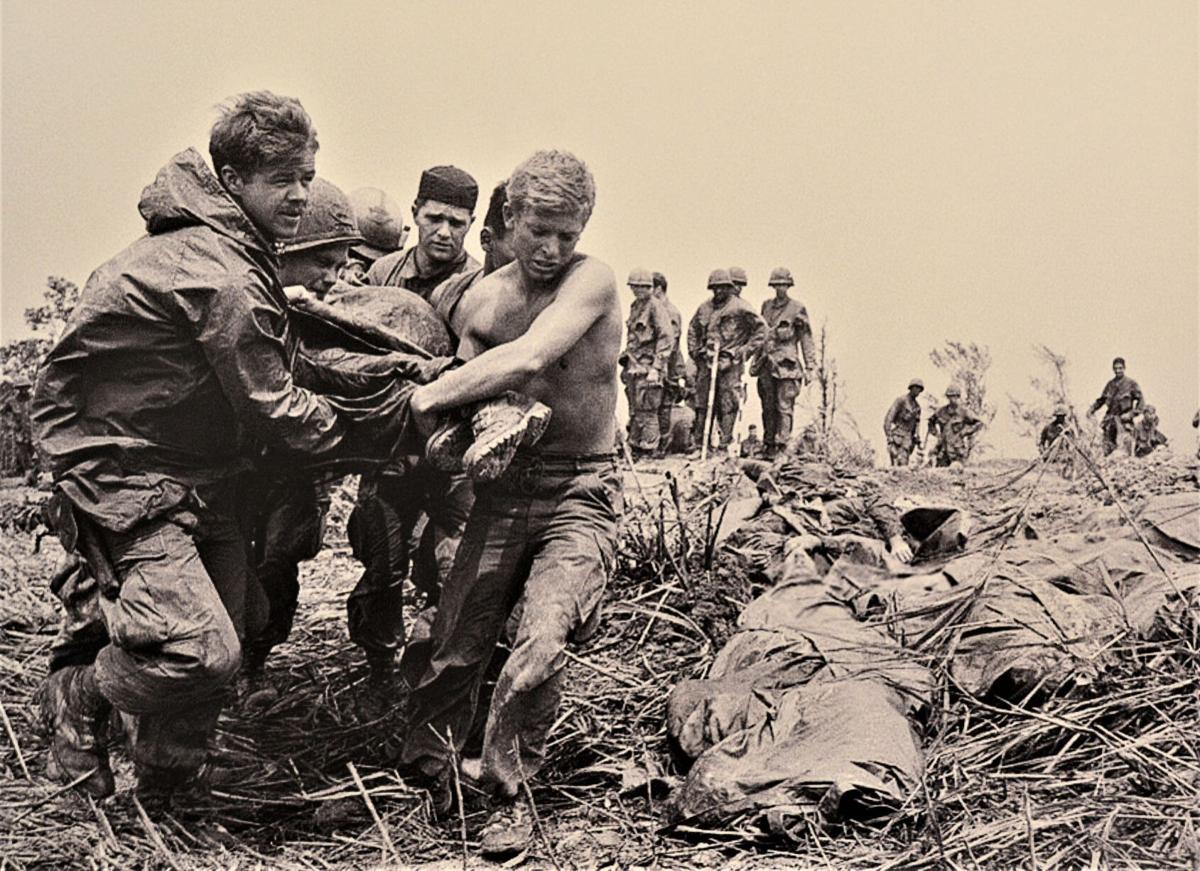 Mike Landrum, shirtless in front, was featured prominently in a photo from Vietnam, which was featured in ‘Time Magazine.’

The Rev. Mike Landrum stands next to medals from his time in the service in his office at Bible Baptist Church in Brunswick.

Mike Landrum, shirtless in front, was featured prominently in a photo from Vietnam, which was featured in ‘Time Magazine.’

The images on the news are daunting. While many people remain sheltered at home due to coronavirus, others are fearful of the fire and destruction that erupted after a police officer killed George Floyd outside a Minneapolis convenience store.

The Rev. Mike Landrum has seen worse, and he, as the Bible says, fears not during some of the worst times in his 72 years.

Landrum is the pastor of Bible Baptist Church on Harry Driggers Boulevard. His office is decorated with mementos of his service in Vietnam with the 1st Air Calvary in 1967 and 1968 where he won an Army Commendation Medal his first day in the field. The medal with its green-and-white ribbon hangs with an Air Medal for more than 25 helicopter air assault missions and his Vietnam service and campaign medals. On a wall of their own are some handsome mounted game fish he has caught.

It was on one of those missions in an iconic Huey helicopter that he made a promise that he believes ultimately put him in the pulpit with a Bible open before him.

God did get him home from the horror some of which is memorialized in a black-and-white photo of a shirtless Pfc. Landrum and other soldiers placing the body of an American soldier among those lined up on the ground. It was a 1968 centerfold in Newsweek and on a 2018 cover of an issue on images that had changed America.

He fulfilled that promise to God but not when his feet first hit ground in “The World,” as those serving in Vietnam called home.

Upon leaving the Army, he took advantage of a jobs program to land a U.S. Postal Service position carrying mail in Augusta. He was on his route one morning when Joyce Hawk, late for work, topped a hill in her new Plymouth Road Runner and almost hit him. He waved her to the side and said, “I’ve got three questions for you.” He asked was she married, was she dating and, having gotten a couple of “No’s,” he asked her to go out with him. She agreed and romance blossomed with this Christian woman.

“If I wanted to date her on a Sunday and Wednesday night, I had to go to church with her,’’ he said.

“I was scared to death of that man. I would never let him get close to me,’’ Landrum said.

Until one day, he took him fishing downstream from Clark’s Hill dam on the Savannah. Before sending water through the generators, the Corps of Engineers sounded a so fishermen could clear out.

As they fished, Kent asked, “You know Mike, if they blew the horn and the anchor stuck and we both drowned, are you 100 percent sure you’d go to heaven.”

Later, after Landrum had backed his boat into his yard, Kent asked again and got the same answer.

But moments later, Landrum said, “I buckled my knees and asked the Lord to forgive me my sins and come into my heart.”

The born again Mike Landrum no longer needed any urging to go to church. He couldn’t wait to get there, and, with a wife and two kids, quit his job and went to Baptist seminary at Temple Tennessee University in Chattanooga.

He’s been in the pulpit at Bible Baptist for more than 40 years and during his tenure the church has turned out hundreds of preachers, most trained in the church’s own Bible college, and supported missionaries around the globe.

Landrum has had to deal with back-to-back crises, the coronavirus that closed his church and, locally, the shooting death of Ahmaud Arbery followed by the rioting after a police officer killed Floyd with a knee on his neck.

A number of Bible verses come to mind that cover all of it, he said. As complicated as the social and medical issues are surrounding the recent times, Landrum said the solution can be found in the three elements he taught recently: Repent of your sin. Trust the Lord. Believe.

In Acts 16 when their Philippian jailer asked Paul and Silus what he must do to be saved, they responded, “Believe on the Lord Jesus Christ, and thou shalt be saved...”

Landrum said he could find no other place in the Bible where “Believe” is capitalized mid-sentence. Also, in the Bible and in contemporary law books, shall carries more weight and promise than will.

Belief has its own elements beginning with understanding, Landrum said.

“I sat in a church a year. It was six months before I realized I was lost,’’ he said.

Then there are the emotions that everyone has, even the quietest and most stoic, Landrum said.

From those emotions and understanding, people must make a choice of accepting Christ or going on their way still lost, he said.

If more people made the choice of salvation there would not be so much wickedness in the world although, as Timothy promised, evil people will grow more evil, Landrum. That increase in evil, Landrum said, is what we are seeing now.

Christians must achieve balance and consistency in their lives otherwise they react too strongly when troubles arise as they surely will, he said.

“Until you die, you’re gong to have problems,’’ and maintaining balance and consistency helps deal with them, he said.

He has dealt with the problems as they arose, but one has stuck with him throughout his adult life.

“I’m still dealing with death,’’ he said, all the way back to 1968 when his 1st Calvary unit lost 15 men in their mission to extract the besieged Marines at Khe Sanh. After all, he carried their bodies.

His lingering memories aren’t evident as he is typically a friendly, talkative man, but sometimes he just wants to get off alone. He lives life, as he says, “Wide open,’’ tending a big garden at his home north of Darien and on Thursdays, his day off, hunting or fishing on the Altamaha, usually alone.

For those depressed and haunted by what they see happening in the country, Landrum says to remember Jesus is as close as ever.

To stay above it all, Landrum advises, “Stay Truthful.”

And he adds with a big grin, “Buy a boat and go fishing.”