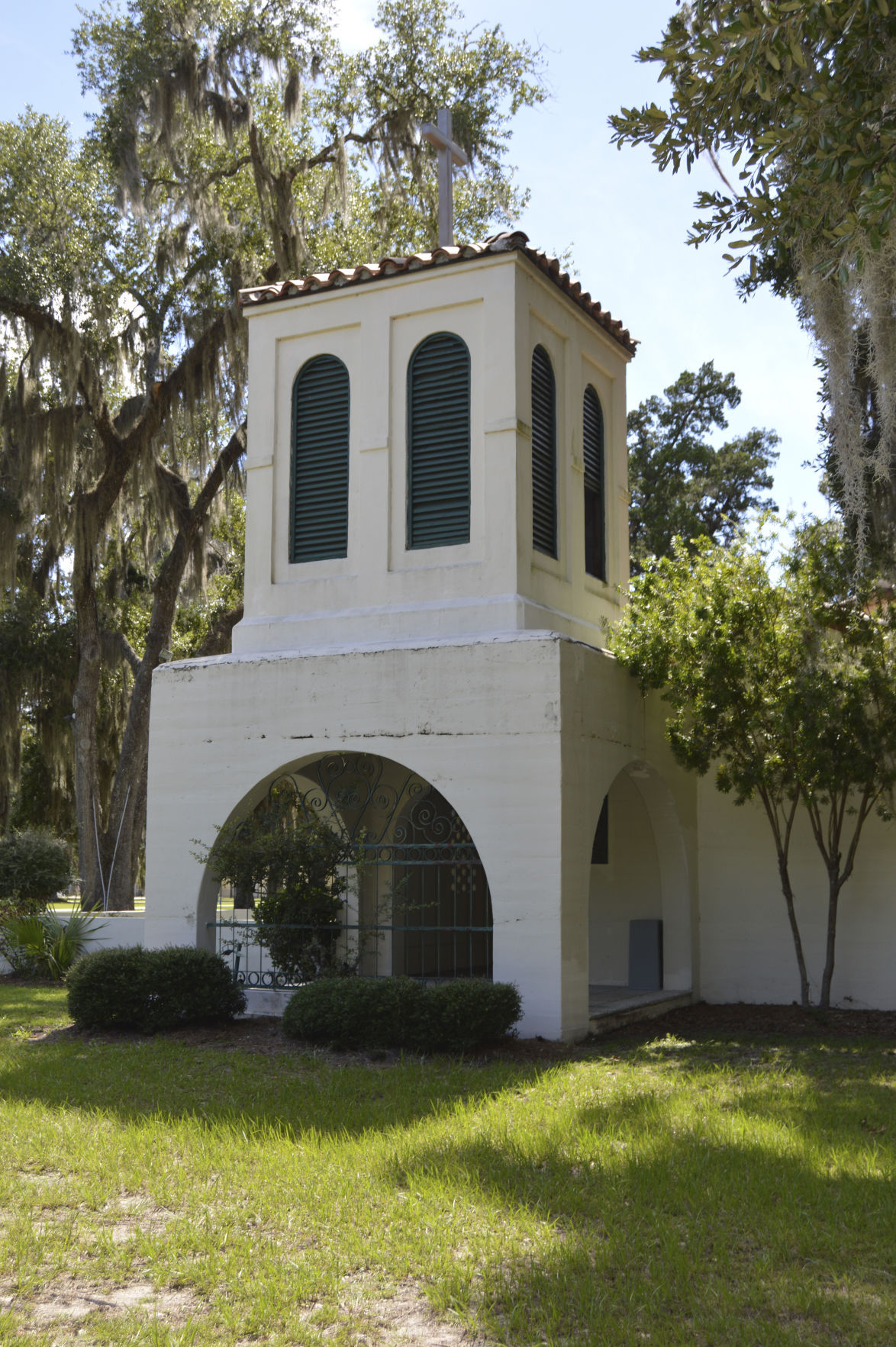 The James V. Carmichael Memorial Chapel is on the campus of Morningstar Children and Family Services. 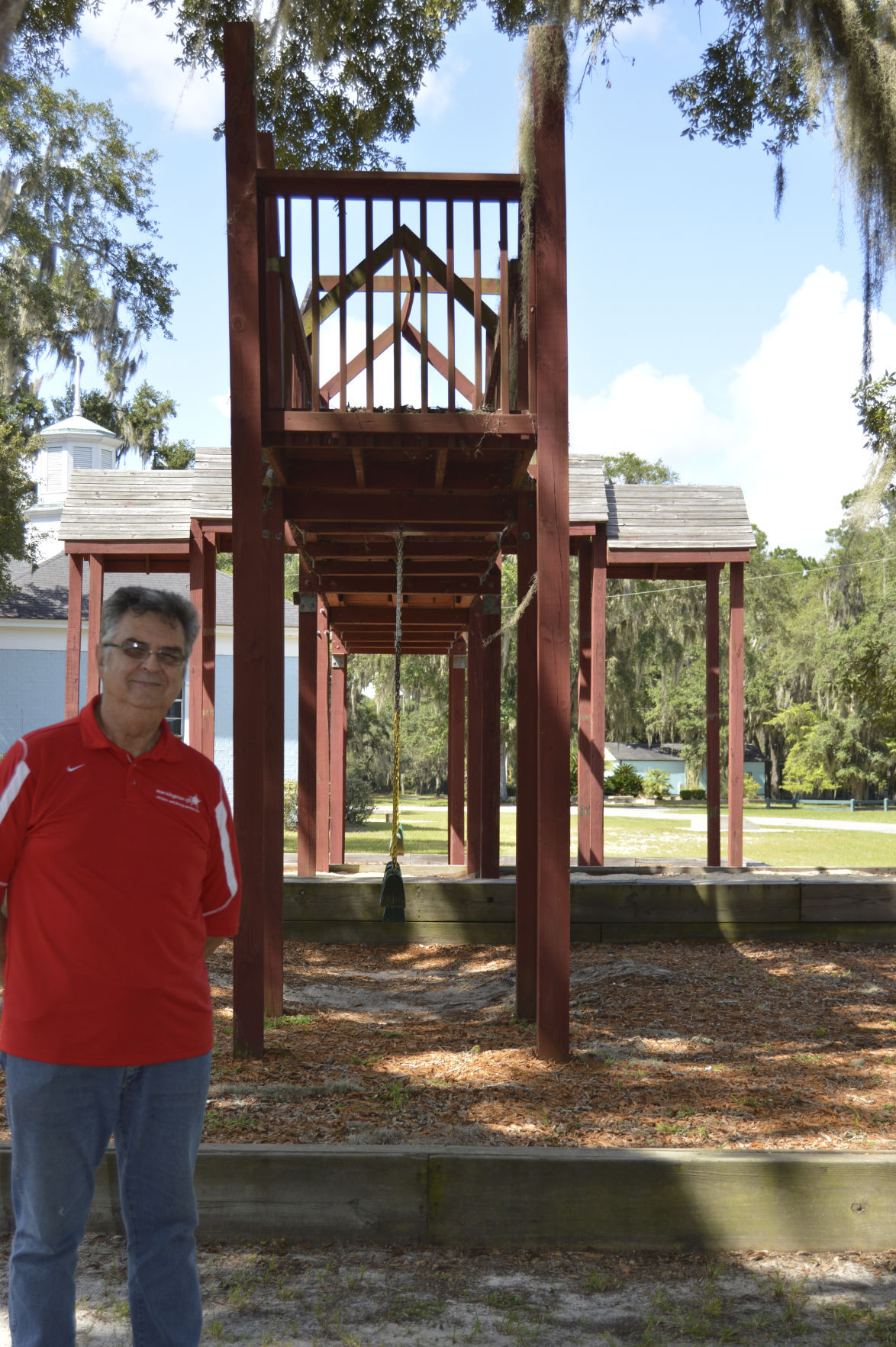 Leon Peacock, a board member of the Boys’ Estate, Ga./Youth Estate Alumni and Friends Association, and one of the lead planners of the upcoming reunion weekend, stands next to one of the many playground apparatuses on the Morningstar Youth Estate campus. 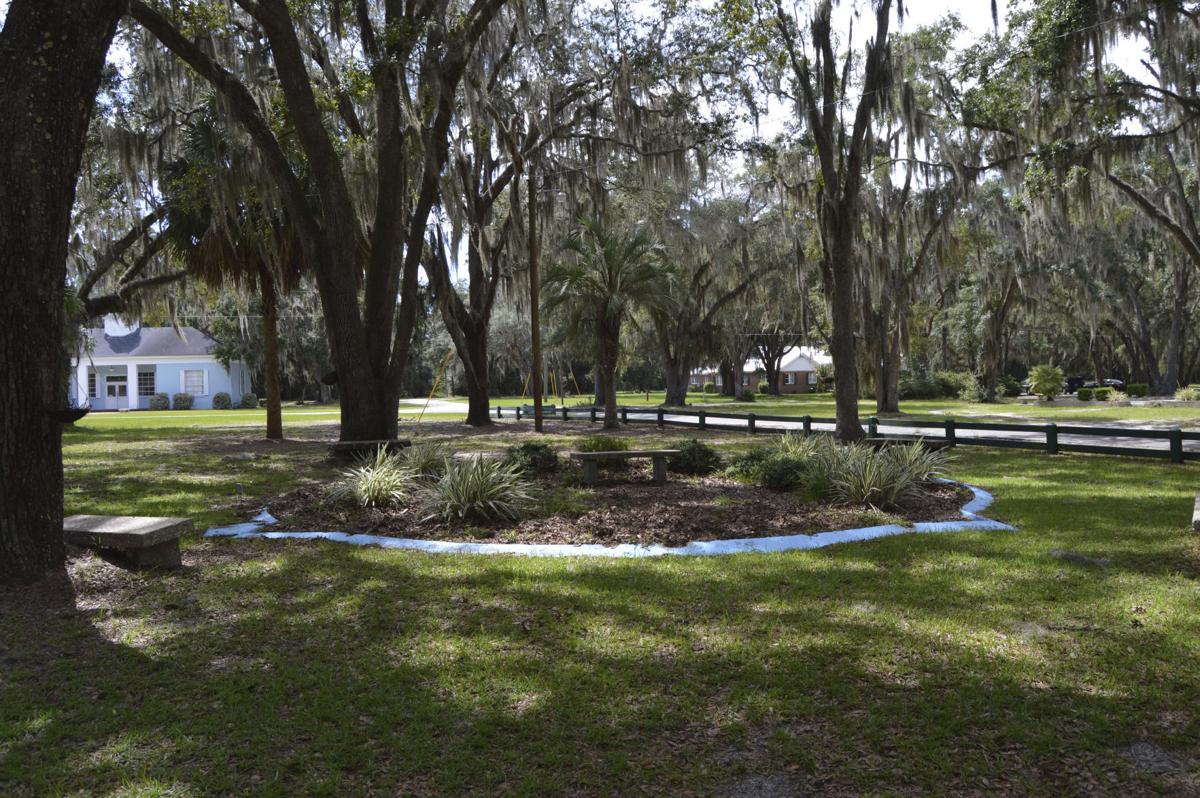 Old stone benches surround what was once a goldfish pond on the Morningstar Youth Estate Campus. The benches are the spot that boys were assigned to on Sunday afternoons for misbehaving. 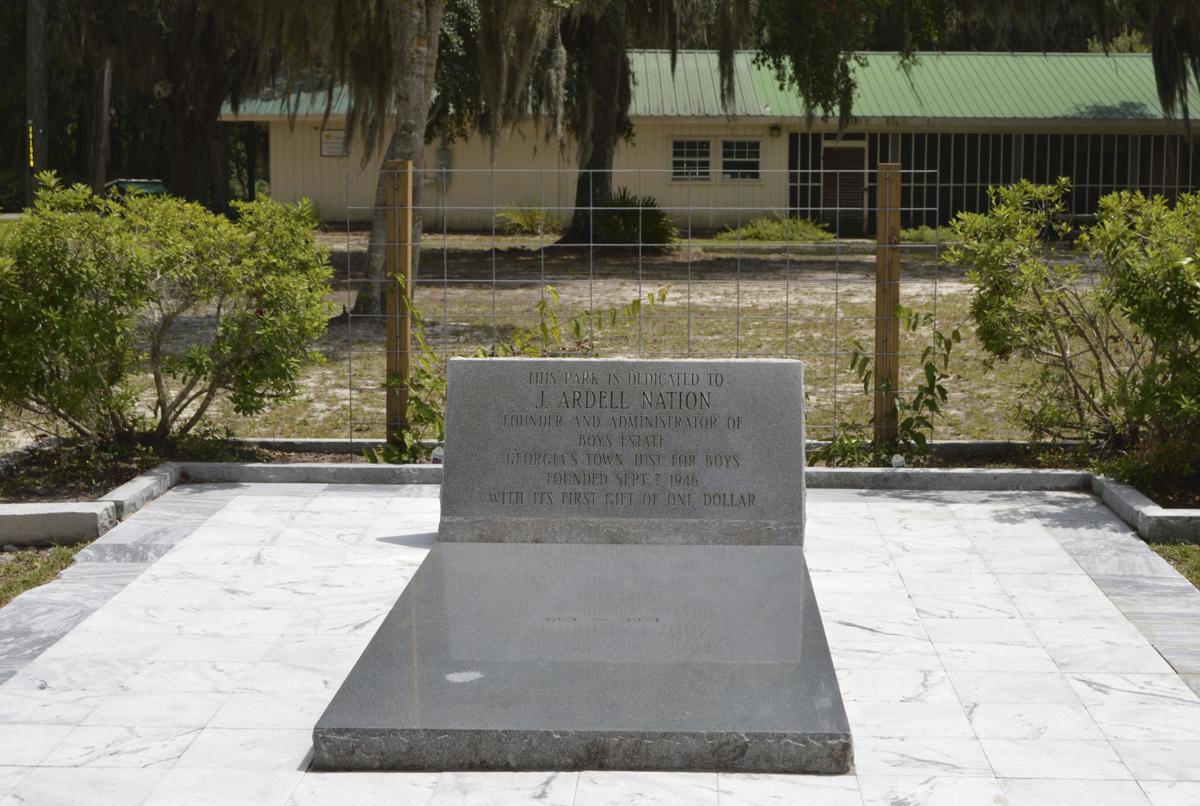 The grave of Boys’ Estate founder. J. Ardell Nation on the campus of Morningstar Youth Estate in north Glynn County.

The James V. Carmichael Memorial Chapel is on the campus of Morningstar Children and Family Services.

Leon Peacock, a board member of the Boys’ Estate, Ga./Youth Estate Alumni and Friends Association, and one of the lead planners of the upcoming reunion weekend, stands next to one of the many playground apparatuses on the Morningstar Youth Estate campus.

Old stone benches surround what was once a goldfish pond on the Morningstar Youth Estate Campus. The benches are the spot that boys were assigned to on Sunday afternoons for misbehaving.

The grave of Boys’ Estate founder. J. Ardell Nation on the campus of Morningstar Youth Estate in north Glynn County.

Prior to the 1938 release of the movie “Boys Town,” which starred Spencer Tracy and Mickey Rooney, few people outside of Nebraska had heard of Father Edward J. Flanagan, the priest who had a vision to create a home for boys who were experiencing a variety of hardships. Born in Ireland in 1886, Flanagan came to Nebraska following his 1912 ordination.

Flanagan established his first home for boys in 1917, which eventually grew into the sprawling residential campus (and several satellite locations) which now serves both boys and girls.

According to the Boys Town website, Flanagan believed every child could be “a productive citizen if given love, a home, an education and a trade.” And he was quoted as having said, “There are no bad boys. There is only bad environment, bad training, bad example, bad thinking.”

J. Ardell Nation, a native of Rome and a Glynn County resident, shared Flanagan’s vision and decided to establish a home for boys similar to Boys Town somewhere in Glynn County. That was the beginning of the long-running Boys Estate, a 363-acre campus in northern Glynn County that was home to boys in need until eventually admitting girls as well, and being renamed Youth Estate. Nowadays, the Morningstar Youth Estate Campus is a residential therapeutic home for boys and girls.

“He (Nation) was the one with the vision; he was the founder of the first Boys Club in Brunswick; it was through his relationships with the boys that he realized something more was needed,” said Leon Peacock, an alumnus of Boys’ Estate and organizer of the “It’s All About the Children,” 70th Anniversary Reunion, Open House and Fundraiser. “It (Boys’ Estate) was purposefully modeled after Father Flanagan’s Boys Town in Nebraska.”

Peacock has fond memories of Nation.

“He had a calm demeanor and he was decisive in that he expected you to do what he wanted you to do, in a timely manner,” he said. “He was a father figure to all of us.”

Sponsored by the Boys’ Estate, Ga./Youth Estate Alumni and Friends Association, the two-day event will feature storytelling, and art and silent auction fundraiser, a campus open house and tours, lunch, a children’s fishing tournament, the rededication of the Ophelia Dent Park and live entertainment by Rhonda Morgan Carmichael.

Before the land became home to Boys’ Estate, and subsequently Youth Estate and Morningstar Youth Estate, it had been the site of the Elizafield Plantation, where cotton, rice and sugar cane was grown. The property was eventually acquired by the state and developed into Santo Domingo State Park in the 1930s by the Civilian Conservation Corps (C.C.C.). It was only a few years later that Nation purchased the land.

The last owner of Elizafield was Col. Cater Woolford, who also owned Altama Plantation where he resided. It was upon his death that the deed passed to the state.

“He (Woolford) donated the 350 original acres,” said Peacock, of the land that became a state park. “The Jones’ family (Sea Island Co.), who owned Altama after Woolford’s death, donated an additional 13 acres to Boys’ Estate because the land adjoined.”

Peacock was 10 when he arrived at Boys’ Estate, where he remained for four years, with only his older brother, Leon, then 12, with him. The two had been taken from their mother’s home because she was unable to care for them.

Despite having been removed from his childhood home by the state and winding up at Boys’ Estate, Peacock is thankful for the opportunities the facility gave him. The boys attended public schools in McIntosh County at the time Peacock was there, and were driven to church on Sundays in Darien. Once there, they could attend the church of their choice, but attendance at Sunday services was not mandatory, Peacock said. Campus residents attended schools in McIntosh until the 1970s, he said.

The campus still houses children in need, but these days provides residential, foster care and mental health services, including those with multiple diagnoses and intellectual disabilities.

When Peacock was a resident, the facility was home to 38-46 boys, 15 to 20 of whom are returning for this weekend’s reunion. Other guests will include Lea Nation, the daughter of the founder, one of his grandsons and other family members. Also on hand will be Donna Rogers, the daughter of the first resident of Boys’ Estate, and Cater Woolford’s great-grandson.

Boys’ Estate had an all-boy government that made laws, held court and meted out punishments that including fines and time spent on solid stone benches so the boys could review their transgressions. Peacock said one of those returning men will be Paul Strickland, who was the first police chief on the campus. After leaving Boys’ Estate, Strickland attended the University of Georgia on a basketball scholarship, and after graduating from UGA spent 33 years as a Georgia State Trooper.

Another returning alumnus is James Bonds, who arrived at Boys’ Estate when he was 6 years old.

“When he graduated from McIntosh County, he was president of his senior class and voted ‘most likely to succeed,’ said Peacock of Bonds, who attended both Brunswick Junior College and Georgia Southern University on scholarships, and earned a bachelor’s degree in physical edication.

“He came back to Boys’ Estate as its resident director while at the same time teaching and coaching in the McIntosh County school system,” he said.

The friends association, a 100 percent nonprofit corporation, will use proceeds from the weekend’s events to fund projects that have a direct affect on the children at Morningstar Youth Estate. Members of the board of directors include Mildred Wilcox, Mary G. Freeman, Lucy Albenze, Rex and Charlotte Stargel and Ray Williams, along with Peacock, who said the association alone is responsibility for the administration of the funds.

Involving volunteers in upcoming projects is paramount, Peacock said. The association prefers to use its money to purchase materials to complete projects, and inviting volunteers to participate in the construction or implementation of them.

The idea to have a reunion and fundraiser began at Ben West’s funeral, Peacock said. West, a well-known picture framer, died suddenly in October 2015, and while there he met Mildred Wilcox, an art gallery owner from St. Simons Island, who, along with her mother, the late Mildred Nix Huie, an artist, had made significant contributions to Boys’ Estate. Their names, he said, kept coming up in conversations.

Peacock explained to Wilcox that he wanted to visit the campus, on which he had not set foot in 50 years, but was having difficulty getting access to the campus. Arrangements were made soon after to drop by the campus, and it’s been full speed ahead ever since.

“My meeting with Millie opened the door,” Peacock said. “Now I come and go as I please, and I spend hours out here mowing grass. I’m blessed to come back to my childhood home and spend time out here.”