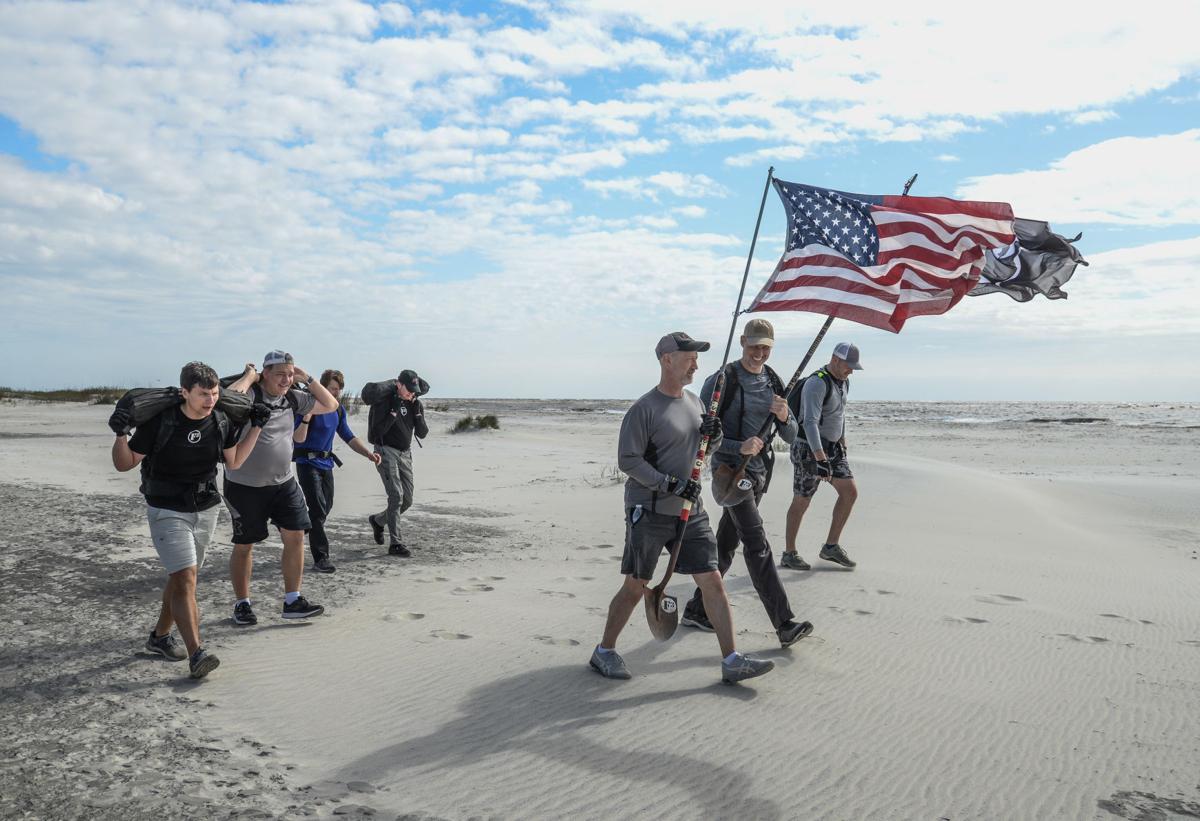 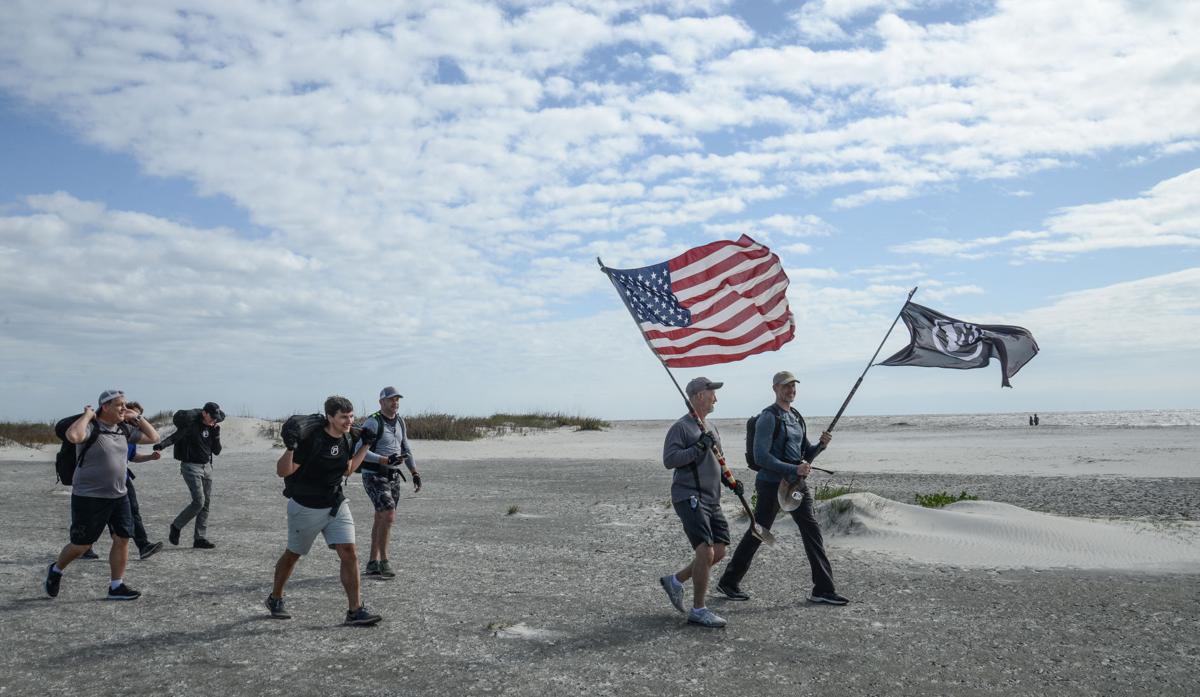 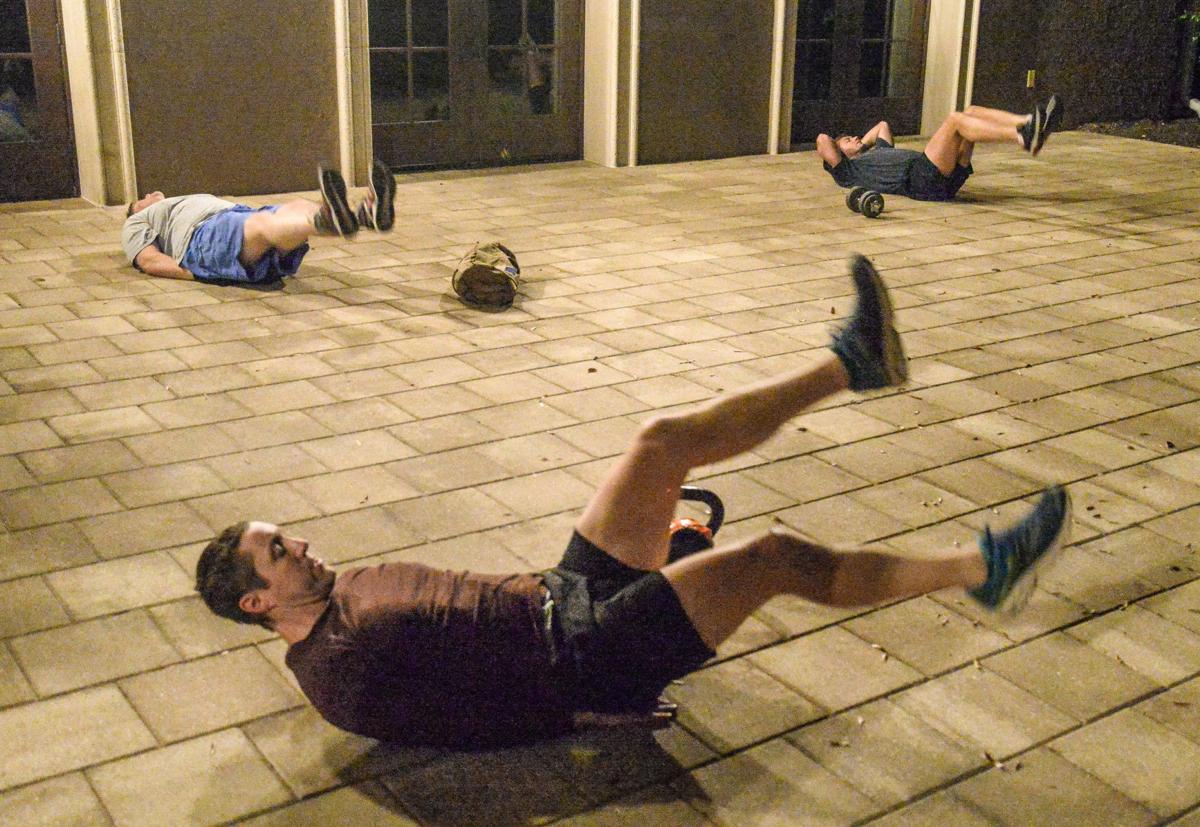 Matt Lexow-Gray is shown working out on the pavers at St. Simons Community Church. Behind him are David Lewis, upper left, and David Pietsch.

Matt Lexow-Gray is shown working out on the pavers at St. Simons Community Church. Behind him are David Lewis, upper left, and David Pietsch.

In the darkest-before- the-dawn time on a Thursday morning, four men met on the parking lot asphalt at St. Simons Community Church. They were working up sweats at the direction of the tallest member, a man who was taking his turn as the Q, the exercise leader.

Their reps finished, they stood and went “moseying around the parking lot,’’ until the Q stopped and pronounced the asphalt at his feet the next station.

“We’re going to do walk down presses,’’ he said.

With their hands down in front of their feet, they walked their feet out backward, walked back to the starting position and then, “Spring up if you like. We’re going to do 10 of these.”

They were all members of the island chapter of F3 Nation. The F’s stand for Fitness, Fellowship and Faith, although the St. Simons groups could use a fourth F for Five-thirty A.M.

That’s the time they start the 45-minute sessions on Mondays, Tuesdays and Thursdays, but they sleep in on Saturdays until 7 a.m.

F3 is a national network with, at last count, 2,605 free peer-led workouts for men in 174 regions. The one on St. Simons celebrated its fifth anniversary in March in a brutal fashion, starting with a 45-minute workout at Oglethorpe Point, a walk to the Community Church for another 45-minute session and then a roundabout walk to the Coast Guard station beach access for a walk south on the beach and another workout. They were led by two members carrying American and F3 flags that a stiff wind stretched taut in front of them. They weren’t the only ones on the beach, but most of the others were wearing coats and sweaters to ward off the cold.

The group on this Tuesday was small because local schools were out for spring break and some were out of town with their families. Matt Lexow-Gray was visiting from Charlotte, the 3F “mother ship,’’ the others working out said. F3 started there in 2011 and has now spread to 30 states.

“You can go to any city and find a chapter,’’ Lexow-Gray said, who has worked out with groups in Waycross, Arlington, Va., and California.

“Now when I travel, I put my running shoes in my bag every time,’’ he said.

Indeed, it doesn’t take much to set up a F3 chapter. Venue is no barrier because, as it says on the organization’s homepage, “Held outdoors, rain or shine, heat or chill, we are out there.”

As for workout equipment, everyone brings their own be it dumb bells, kettle bells or a bag of sand.

“Out there” in more ways than one. Everyone gets a nickname not all as simple as Lexow-Gray’s Lex Luther. It is usually tied to a person’s history or personal life, so when Daren Pietsch mentioned he had been in the Coast Guard, a member offered, “Gilligan.” Too easy, they decided, and settled on another member of the Minnow’s marooned crew, “Mrs. Howell.”

F3 Nation’s website leaves few questions unanswered. After finding a location on a map, the searcher can find meeting times and the type of workout. It even shoots down the top excuses of not joining F3.

That won’t fly with the website because it says the best way to get in shape is joining a bunch of men and trying to keep up. Because there’s no age limit, there are some who can’t keep up but the older the more they’re revered verbally for sticking with it. Those over 50 get a “Respect,’’ those over 50 get “Honor and Respect” and 70 and older get the maximum “Legend.”

Dredd’s response to that, is “Would you get drunk before going to a bar. I rest my case.”

“Dredd,’’ the website says, “is a lawyer.” It doesn’t say so, but Dredd is likely an F3 assigned nickname.

Although Dredd didn’t say it, nobody wipes their sweat from the asphalt or pavers in a church parking lot as they would from gym equipment with the provided antibacterial wipes.

As the session ended with a “Circle of Trust,” Chad Goehring, a leader of the St. Simons chapter, arrived in sandals. He had injured a foot in a bicycle accident and had a big toe wrapped in black tape that blended with his slides making it seem that he had lost a digit.

He said he hoped to be back soon. Before the bike wreck, he was tromping and exercising with the group on that cold, windy fifth anniversary morning.

On it’s website, F3 says it does not favor any religion, that the goal is to have faith in something outside one’s self. But based in Charlotte, F3 is at the seat of old-time Christianity. It’s where Billy Graham had his ministry headquarters.

And in the case of the St. Simons F3 group, they’re mostly unabashedly Christian.

But it’s like the workout, you get in shape to exercise by exercising and the Christian walk starts with stepping out in faith.

David Hicks, AKA Mr. Brady, a legend at 72 gave thanks.

His daughter, he said, was out of the worst of COVID and was going back to work.

When it fell to Pietsch to speak, he provided the elements for a toast to everyone in the circle, told them he had recently lost his mother and how grateful he was she brought him up as a Christian.

In prayer, Pietsch thanked God for the day and, “We thank you for this group of men who work hard to serve you.’’

And he thanked God for his mother who led him into the faith portion of F3.

Indeed, F3’s motto says there is far more to it than improving fitness.

For more information on F3 nation or to find a local group consult the website f3nation.com.

The Brunswick Chapter of The Links Inc. presented a check in the amount of $4,500 to the Coa…

Glynn Visual Arts will host a number of camps during the summer. All camps are from 10 a.m. …

Sparrow’s Nest Food Pantry is in need of soup and chili this week.