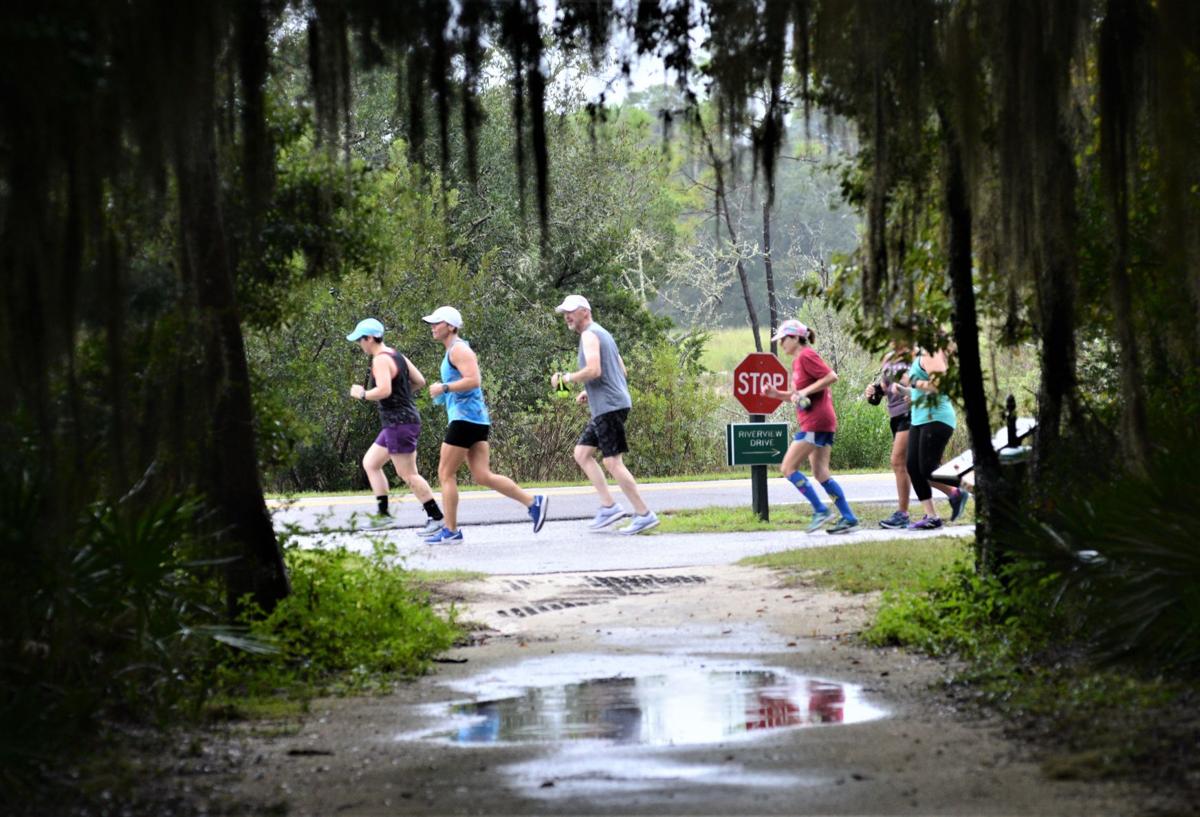 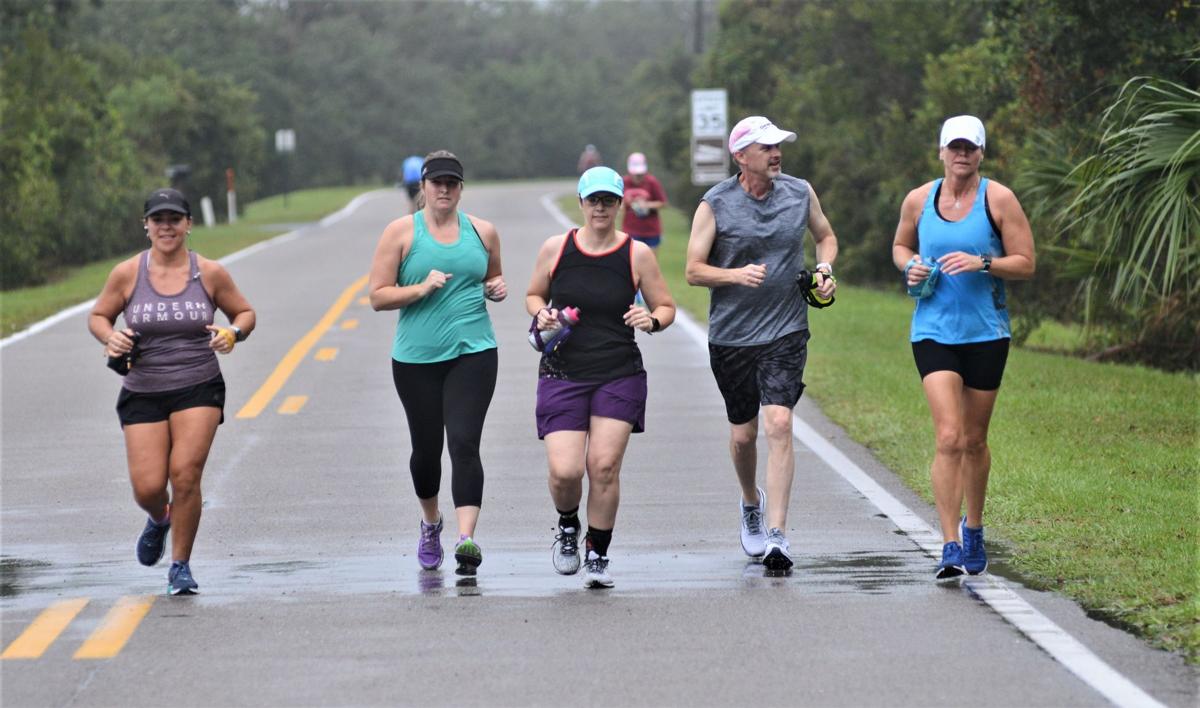 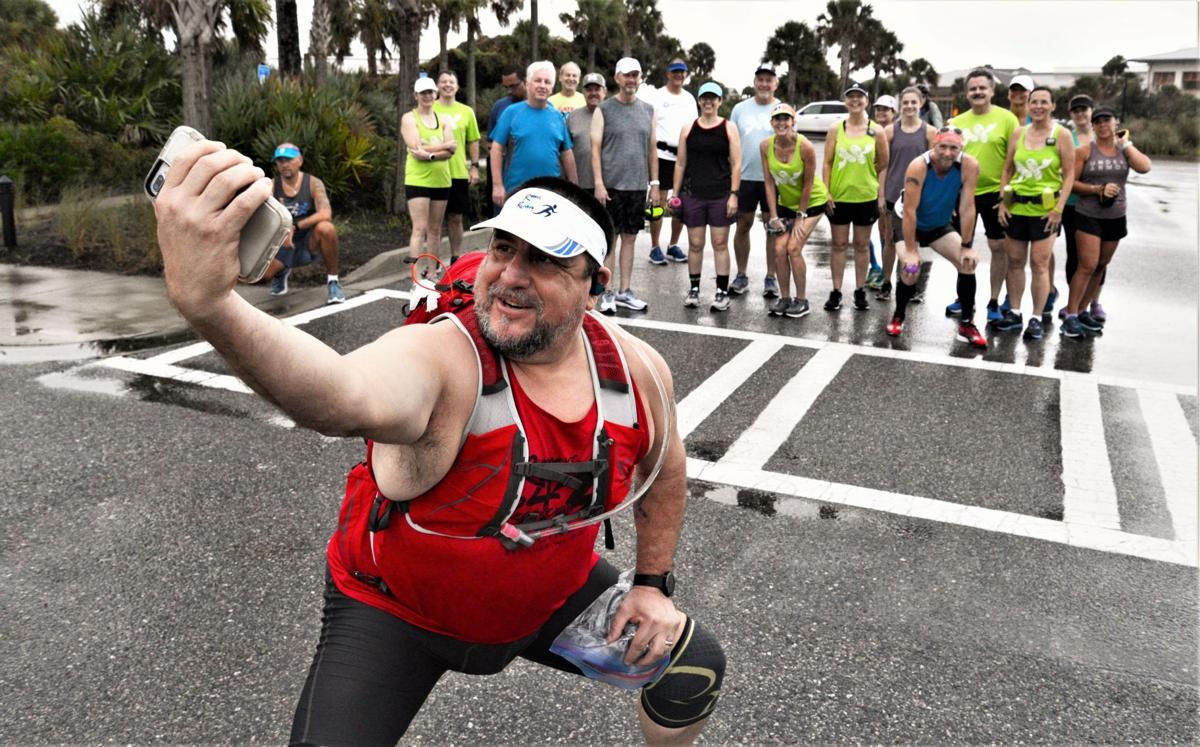 Mike Martinez of Jacksonville takes a selfie with the others runners for a Fasties 5-K on Jekyll Island.

Mike Martinez of Jacksonville takes a selfie with the others runners for a Fasties 5-K on Jekyll Island.

As the rain pounded down on Jekyll Island Saturday morning, headlights lit the drops at Great Dunes Park. After the vehicles parked, the glow from cell phones lit the drivers likely checking their weather radar apps.

As the rain slackened, they left their cars and splashed for the pavilion as the sun came up behind heavy clouds and as gray caps started showing on oceans waves.

The two dozen or so that gathered were in a runners club called the Fasties, although that’s a misnomer said organizer Beverly Latvala. They came to Jekyll to run a 10-kilometer race, the only option as the coronavirus has prompted the cancellation of about every organized running event this year. The last race that crossed the finish line before the COVID-19 stay at home order was the St. Simons Elementary Super Dolphin on Feb. 22.

The Fasties, which now numbers about 50, formed perhaps five years ago as a Facebook group, Latvala said, with a number of purposes.

“The joke was we started the Facebook page so we wouldn’t run our non-running friends crazy talking about running,’’ she said.

They would meet up at specific places, “Usually the pier,’’ she said, and run sort of together.

“We all start and finish at the same place,’’ but not at the same time, Latvala said. “The Fasties, where everybody runs by their own definition of fast. We’ve got a guy who’s run Boston 23 times. That’s fast. Then there’s me.”

She’s not the only one who takes walking breaks during runs and then picks up the pace again. They all seem to cross the finish line at a run.

They would also meet as a group at races such as the Wobble B4U Gobble, a Thanksgiving morning 5K race, the Sunshine Festival on the July 4 and other races, most of them fundraisers. With COVID-19 emptying the starter’s pistol on all those races, there weren’t any sanctioned events so the Fasties decided to hold their own race series. They had a 5K in mid-September, the 10K Saturday and have a 15K planned mid-month and a length of St. Simons half marathon Nov. 7.

Tina Mandrioli was on Jekyll for the 5K. Mandrioli runs the Sidney Lanier Bridge every Sunday “just to get a hill’’ like those back home in New Hampshire. She counts the seemingly ever-present construction barrels, she said, “to break the monotony during this time.” By this time, she means the social distancing highly recommended for public safety.

Kathy O’Neill, a traveling nurse from Sevierville, Tenn., came with Fastie friends Cheryl and Vince Watson whom she met through her landlord. She ran cross country at Carson-Newman and was hungering for a race.

Mark Martinez drove from Jacksonville where he founded a group called Runners4Recovery with more than 100. Of those 20 to 25 run and a dozen or so race, Martinez said.

“It originated with a group called Run Well,’’ he said.

It helps people with alcohol and drug addiction by engaging them in a structured program, Martinez said.

They held a Run for Recovery 5K last year, but this year’s was virtual, he said.

Latvala said the Fasties have a Camden County participant who ran through recovery.

A lot of runs have been held remotely on an honor system — including this year’s Boston Marathon — but the Fasties have persisted in getting together outside in the fresh air, which health professionals say is safest.

There was a virtual Sunshine Festival race this year with an entry fee and shirt, but many skipped the fee and ran when they wanted. Most don’t need another race T-shirt anyway.

About 7:30 a.m. Saturday, an hour later than planned but with much more light, the runners gathered at the starting line in Great Dunes. Holding a spiral notebook, Latvala went through some last-minute instructions including waiving the wave start rule. Typically, the slower Fasties go off first then the more accomplished start when they believe they will run down the slowest runners around the finish line, Latvala said, “So we all finish together.”

This Saturday, however, everyone would start together and finish whenever they finished.

As they gathered loosely behind the starting point, Martinez does what he does for every race, getting out front for a selfie with the runners.

With that done, Latvala said, “If anyone can sing the “Star Spangled Banner,’’ we’ll all pitch in. We’ll pretend there’s a flag. Hats off.”

They sang with hands over hearts and cheered at the finish.

When she said, “Go” most index fingers were poised to trigger start buttons on chronograph watches or on cell phone apps. A few hung back and let the way clear before starting.

They ran north first then crossed the island on Shell Road and headed south along the bike paths crossing under the bridge. They looped near the south end of the island on the asphalt road, shell trails and the bike path again to the finish back at the park.

There was little need for social distancing because most of the runners were athletically distanced as they spread out early between the faster runners up front and those who occasionally slowed to a walk. There was no back of the pack because there was no pack.

There were puddles but no falling rain and as they finished the second race in their series, there were patches of blue overhead criss-crossed by contrails that jets left.

There was finally enough sun to make the whitecaps white as Latvala began planning the next race.

The Fasties are a group of friends who communicate on a private Facebook page. It’s the running equivalent of a pickup game of basketball on an asphalt court with rims without nets. Because they are not organized as a club, they have no officers. They charge no fees, offer no trophies or race T-shirts and anyone who wants to run does so at their own risk.

“We’re just friends who run for the thrill of running,’’ Latvala said.

They’ll start their 15K over a very hard course at the Village Oven at 7:30 a.m. Oct. 24. The half marathon is two weeks later.