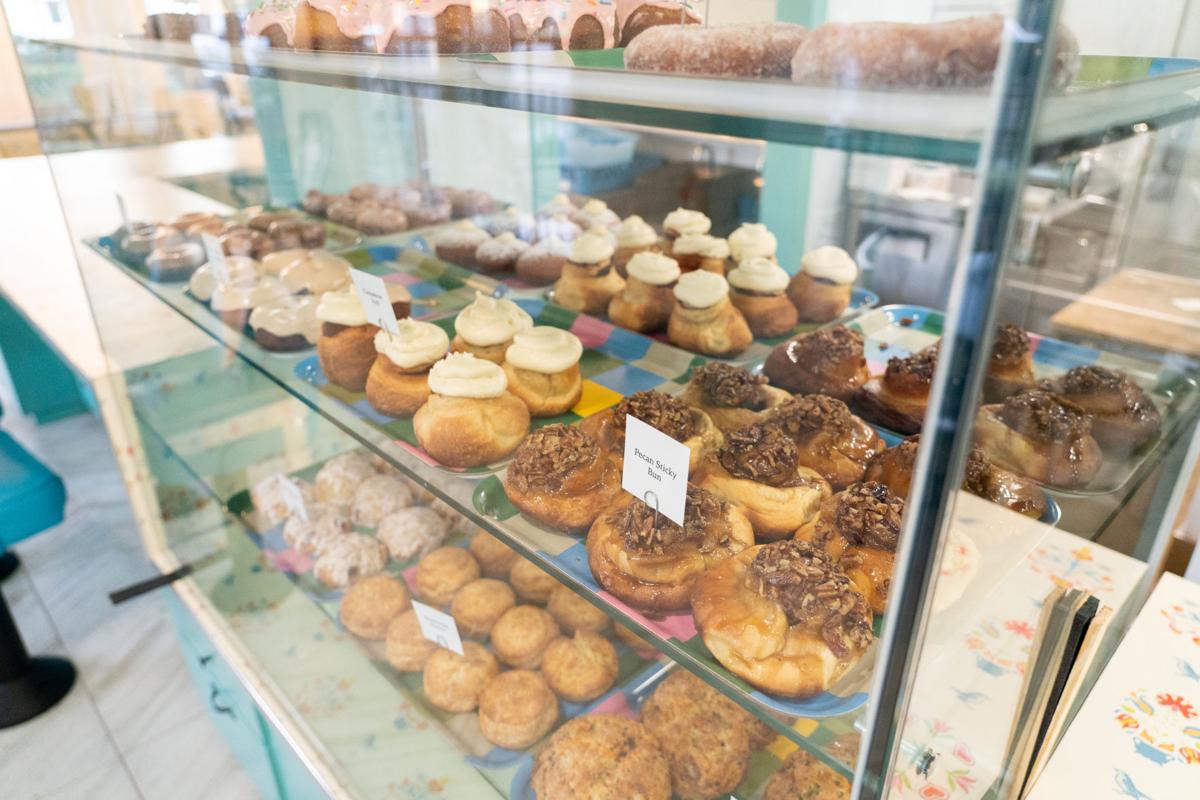 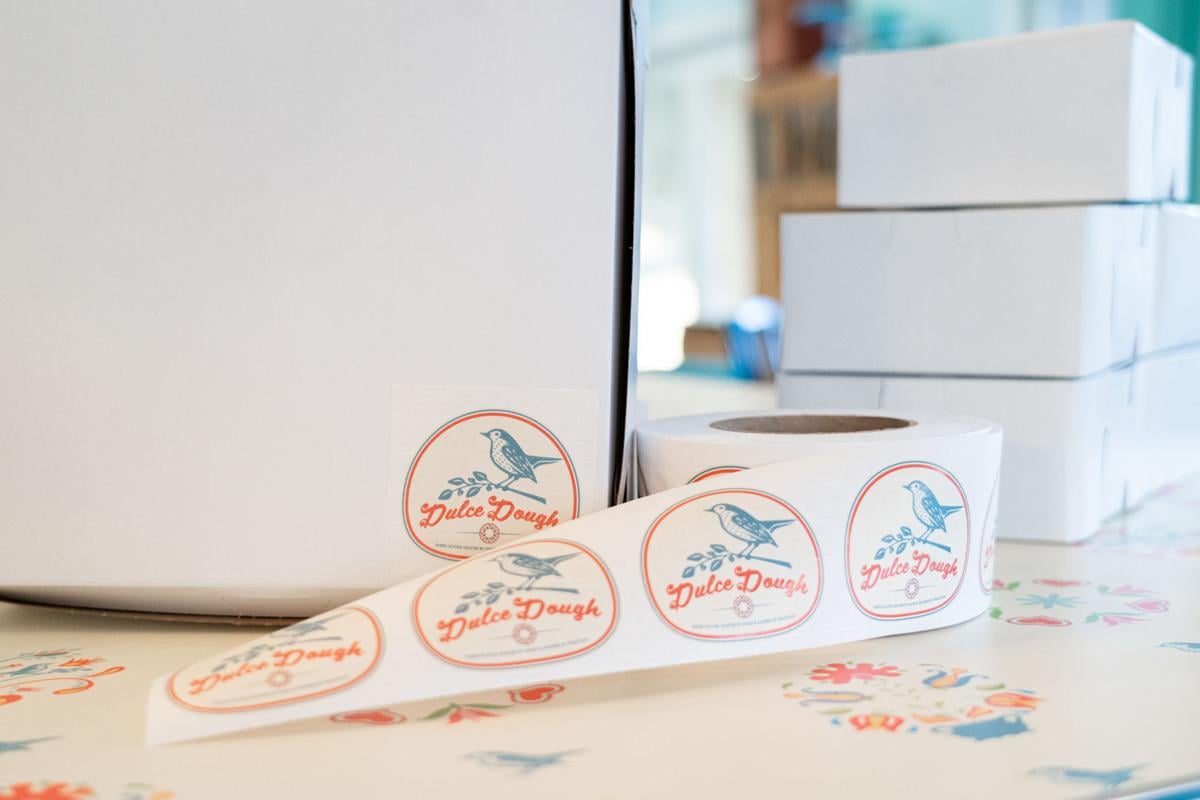 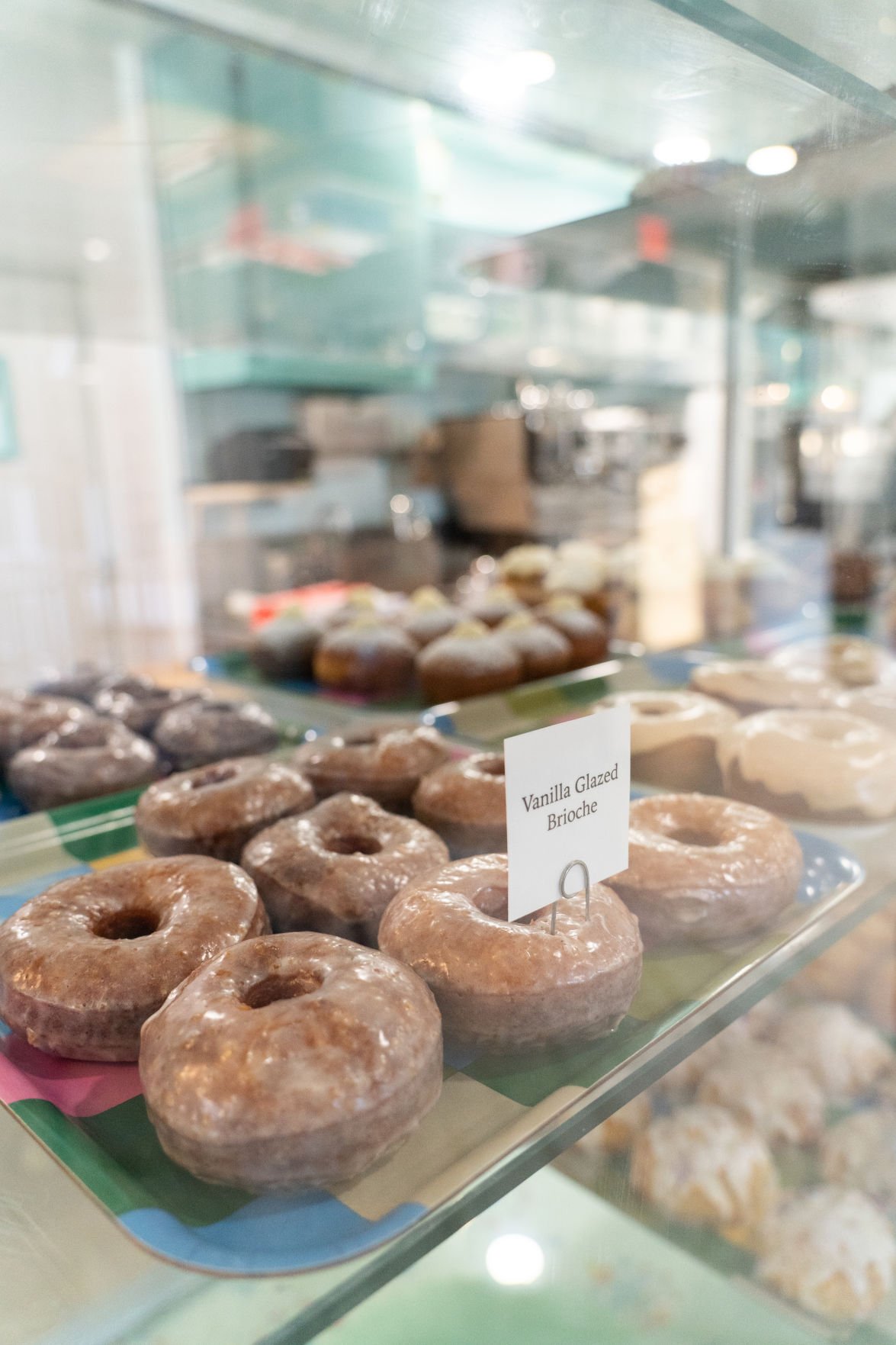 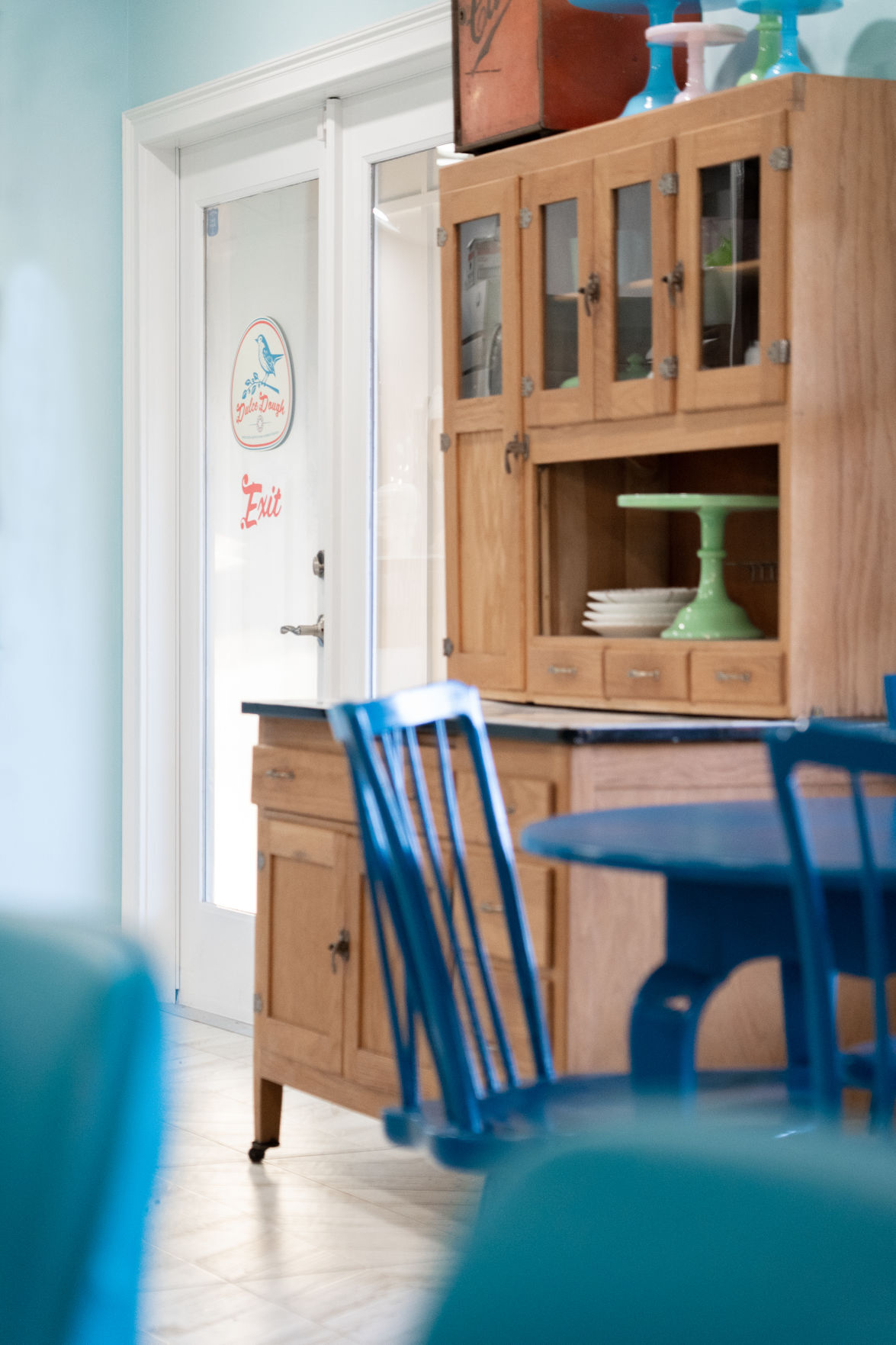 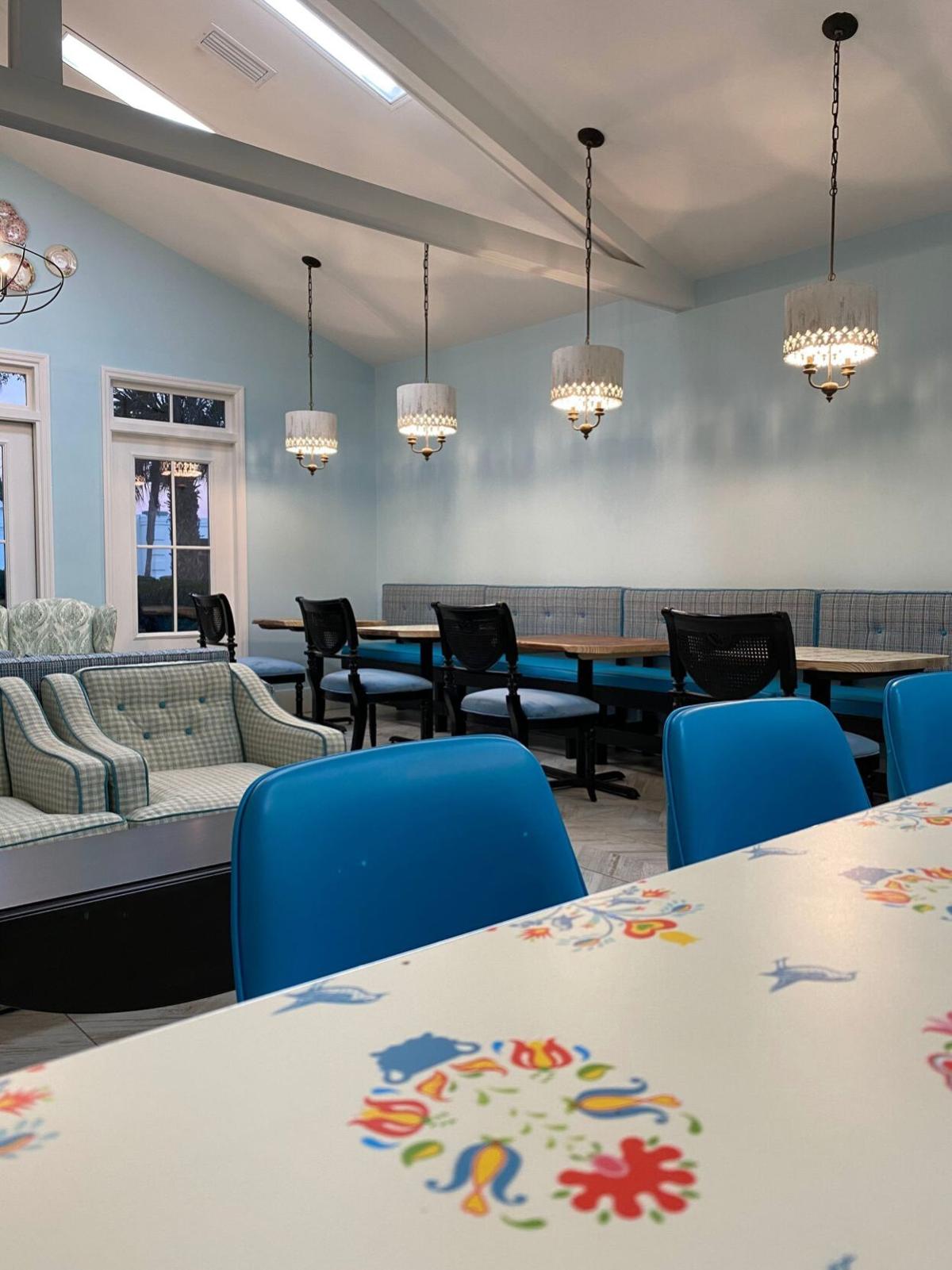 A look at the dining room of Dulce Dough.

A look at the dining room of Dulce Dough.

It’s official, St. Simons Island has everything one needs in life.

There’s delicious barbecue, bakeries, burger joints and plenty of bars that serve up delicious drinks, but the one thing that was missing was a doughnut shop. No longer is that an issue as Ryanne Carrier opened up Dulce Dough — a boutique donut shop, located at 1624 Frederica Road, St. Simons Island.

The doors open up to an inviting dining room that feels like walking into your grandmother’s house. There are laminate countertops and hodgepodge furniture — it just feels right. Carrier wanted people to feel calm, relaxed and like their grandmother is frying up donuts.

“I wanted it to be comfortable. I wanted people to feel, kind of like, pre-COVID, I wanted to remind them there was a time before COVID, and remember what that was,” Carrier said. “Like the counters, they’ll like touch the laminate and be like this reminds me of my grandmother’s house, and it draws on positive memories. If you think about it, what your grandmother means to you, or at least most people, hopefully, is that your grandmother gave you unconditional love.”

Dulce Dough opened on Christmas Day and has had community support from the start.

Carrier and her manager, Alicia Luna, talked about how the builders, floorers and electricians all came together and helped make it happen. They also purchased their tables and chairs from various local antique stores like Victoria Place and Coastal Relics.

They say the community was so invested some people would even come by during the building process to see how everything was shaping up. Some even helped them with refurbishing furniture.

“They just wanted to be here and dropping gifts — like ‘When are you guys going to be open’ or just coming and checking out the space just to see what was going on,” Luna said. “And that was amazing. We knew we were going to be busy, and we were grateful that they were showing up, even when we were closed.”

Some of those gifts included teacups from someone’s own grandmother.

“They’re like little remote tea teacups — bone China, they’re antique, and they’re special,” Carrier said. “They get the feel by walking in and seeing what we’re doing, and they come bearing gifts. Like the amount of people who come in and tell me they have their own milk glass collection. That gives us something to talk about.”

Carrier’s doughnuts are handmade from brioche dough, similar to those she did at her husband David’s restaurant, Certified Burgers. She’s taken the original recipes, which wasn’t originally brioche, but tweaked it for about two years until she got the right texture and flavor.

“Brioche is an enriched dough, which means that you add eggs and butter to your dough, and of course, milk, as well,” Carrier said.

Even the jellies, glazes, pastry creams — everything is made from scratch. That stemmed from Carrier’s youth as she watched her grandmother from Sicily make homemade pasta with their family.

Her Earl Grey glaze is just one of the many flavors Dulce Dough provides. Carrier still does her sticky buns and cinnamon buns, as well. Most days, there are at least six different flavors for people to choose from — even a maple bacon donut with thick slices right on top of her delicious maple icing.

There is also a cinnamon doughnut that both Carrier and Luna rave about that was mirrored after the original taste of Big Red gum. They even occasionally have a gluten-free cake donut.

“We dip it in glaze, and then I dip it in cinnamon sugar. So it gets this crisp exterior coating, and then the donut inside is just so soft and lush. It’s just delicious,” Carrier said.

“What I’ve always loved about it (Big Red) is it always had this bite to it because cinnamon has a little heat to it. I wanted it to remind me of Big Red gum — the real big Red gum. That was the only gum that I would ever eat.”

Since they’ve opened, Carrier said they’ve had lines out of the door and continue to sell out what they make. Throughout the first week they were open — 7 a.m. to 4 p.m. — by 2 p.m. everything was gone.

Carrier said she’s more than quadrupled her production since opening. There always seems to be a line out of the door, and people will get there as early as 6:30 a.m. just to make sure they get whatever flavor they love most.

While Carrier has been in the business a while, her passion shines through. Her labor of love are these donuts, and it’s just what the island needed.

“I want to bring people joy — I want them to feel it,” Carrier said.

“It’s so important, because this past year 2020, and we’re not out of it yet, but 2020 has been such a challenge on many levels for people financially, emotionally physically — it’s just been such a challenge. I want all that to disappear when they walk through the door. I want them to think of a different reality.”

Dulce Dough is open from 7 a.m. to 4 p.m. Wednesday to Sunday until the offseason ends, then they will be open on Tuesdays as well.

Three 'This Girl Can' workshops planned this month

The Golden Isles College and Career Academy will continue this month its This Girl Can program with three new workshop opportunities.

Teresha Page is one of many local students who is taking her education one step further to gain experience that will contribute to future career success.