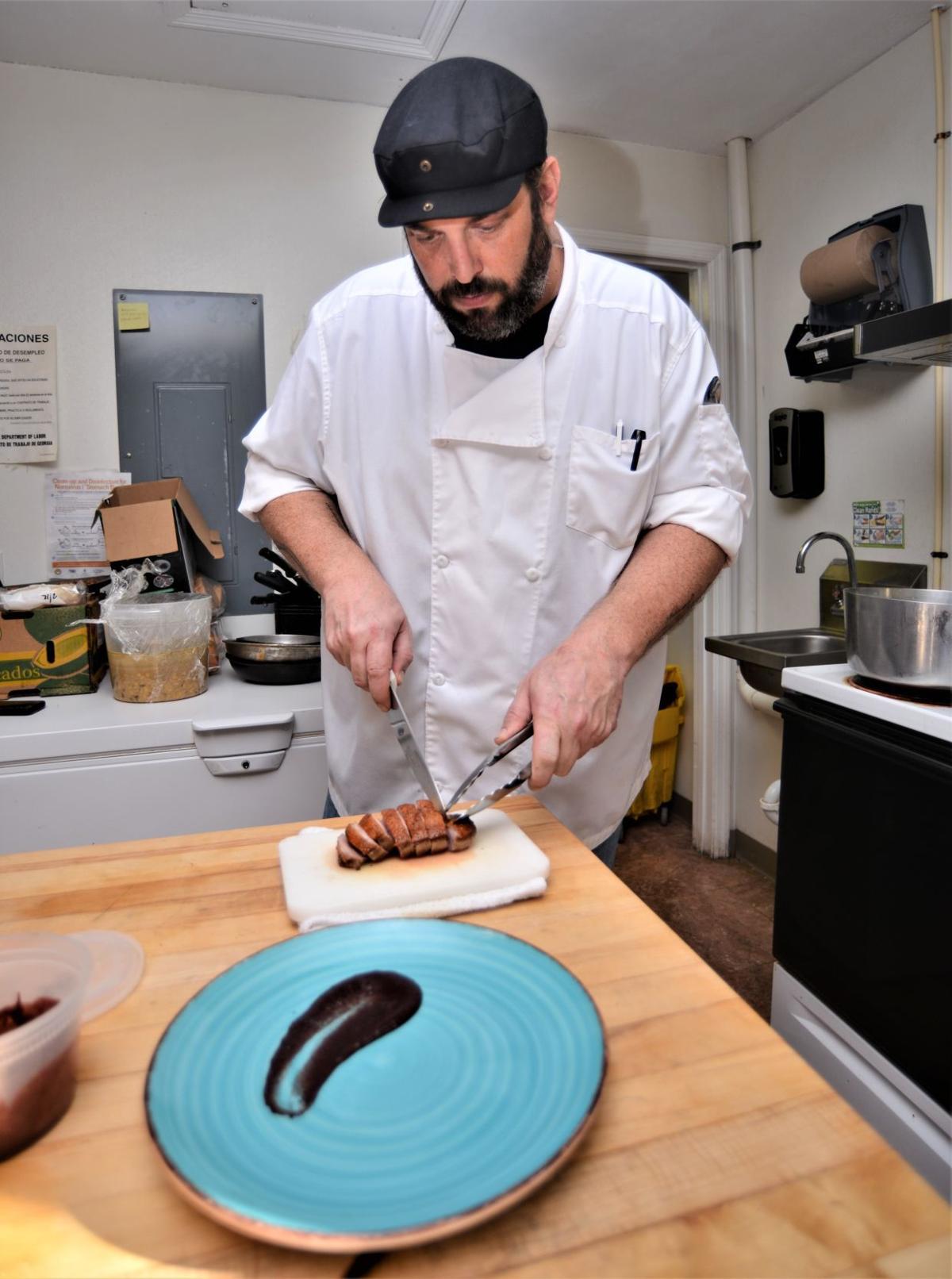 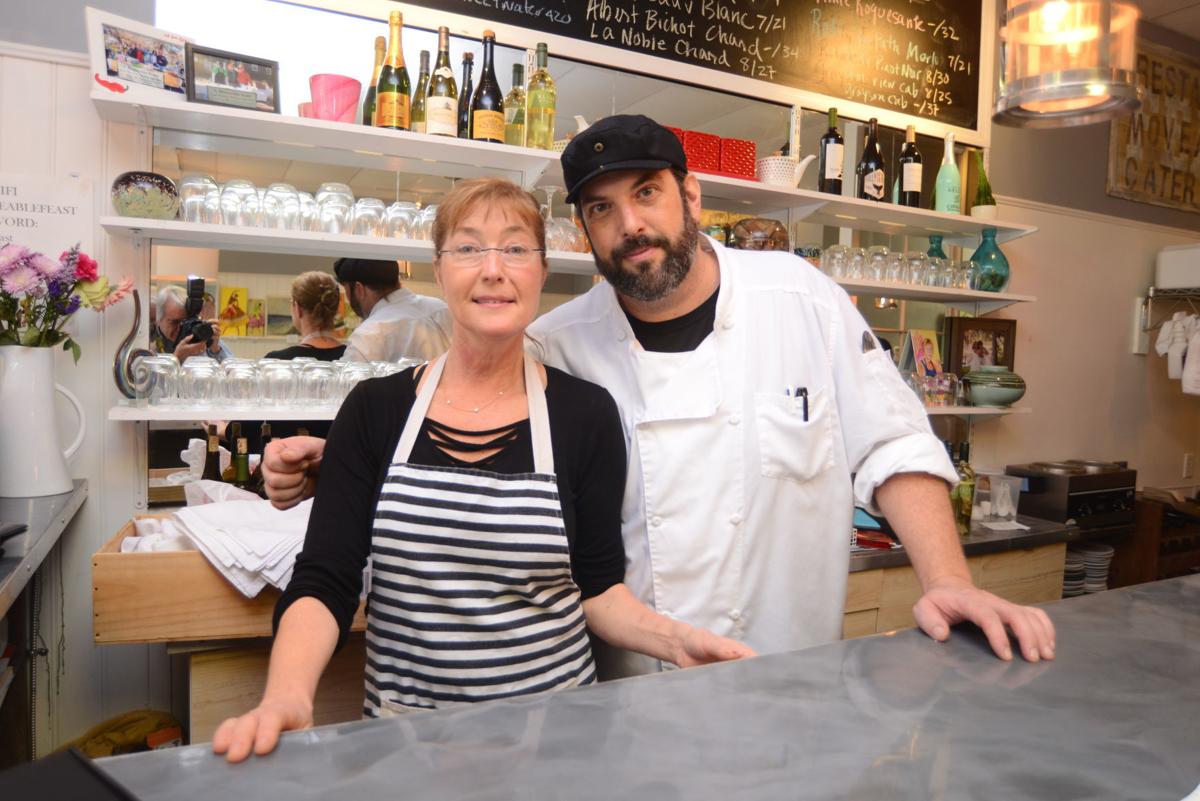 If you’re into moveable feasts, Tanya Sergey now has two a day.

Formerly, Sergey served only lunch at A Moveable Feast, her restaurant at 1178 Chapel Crossing Road, across from the Federal Law Enforcement Training Center in Brunswick, but she recently added dinner.

That’s possible because chef Mike Woods is now on the staff.

“I’ve been trying to get Mike over here. He finally decided to come,’’ Sergey said, on Valentine’s Day, a week after she began opening for dinner.

As he carefully sliced a seared duck breast that would be part of the Valentine’s Day dinner menu, the affable Woods said he had worked at another private restaurant for the past four years. In saying “private,” he made the distinction from corporate restaurants where the menu is the same from the oceans to the prairies and where much of the food comes premixed or battered and ready to dump onto a pan or into a pot.

“It doesn’t come off the truck (frozen). You don’t thaw it in a pot,” Sergey said.

Both Woods and Sergey said they favor farm-to-table food, which calls for finding the best fresh ingredients for their menu.

Woods said he came to A Moveable Feast partly because he likes a challenge and also because a private restaurant gives him freedom to create specials, to create a menu.

“You can go in the refrigerator now and say, ‘We need a soup tonight.’ You don’t have to wait for the truck to drop it off in a bucket,’’ Woods said.

As Sergey rolled out flatbread for the pan, she said, “Everything we do is homemade.”

Among the homemade items for that night’s dinner, the flat bread that would be topped with trout dip, paired with an arugula salad.

Also on the menu was seafood gratin with salmon, shrimp, scallops and crab and homemade toast points.

The entrée was crispy seared duck breast with cherry reduction with a zucchini nest. For dessert, she prepared chocolate mousse tartlet with candied almonds, raspberry puree and chocolate ganache.

Woods and Sergey’s experiences have buoyed their ability to create international fare.

Woods grew up in Washington, D.C., and went to culinary school in Louisville. He worked in management in a number of corporate restaurants including Macaroni Grill and Hard Rock Cafe until he took a three-year break from the kitchen to do mission work in African with Global Teen Challenge, a mission group that built houses and churches in Africa. Then came 2008 when the economy tanked and so did the giving that supported that and other missions.

He subsequently moved to the Georgia coast where he worked in restaurants on Jekyll Island and St. Simons.

He doesn’t consider returning to the kitchen a big departure from missions.

“The way I look at it, both are servant types of jobs. You give people a good experience. They’re coming to eat and to fellowship’ and to enjoy the food and the service,” he said.

A Moveable Feast gets a lot of repeat business.

“We probably know 75 percent of our customers, their families, their careers,’’ she said.

The name “A Moveable Feast” comes from the title of Ernest Hemingway’s memoir that his widow, Mary Hemingway, gleaned from his notes and other materials and published in 1964, three years after his death. Much of it is about his time as an expat writer in Paris in the 1920s where he kept company in bars and cafes with Gertrude Stein, James Joyce, Ezra Pound, F. Scott and Zelda Fitzgerald and others.

Paris was a literal “moveable feast” for Sergey because, like the young Hemingway, she learned her craft there.

“I lived in Paris as a young woman. That’s where I learned to cook. I had a hot pot and a wok. Sometimes, I cooked on my radiator,’’ she said.

She opened her restaurant near the FLETC gate on Feb. 15, 2016, and thought cadets would cross the road for lunch. She learned, however, that most of the students stay on the center to eat at the very low cost cafeteria.

The instructors often go out for lunch but typically not at places like hers with table cloths, metal utensils and the work of local artists on display.

The art changes monthly and with each change Sergey hosts wine dinner receptions on second Tuesdays from 5 until 7 p.m. with appetizers and wine.

The receptions and the lunches have built solid followings, and Sergey figures the same will be true for dinner.

With that success, A Moveable Feast appears to be staying put.

Place two teaspoons of butter in sauté pan over medium heat and wilt shallot and garlic until soft. Add cherries, rosemary, thyme, red wine, balsamic vinegar and brown sugar and cook down for 30 minutes. Fish out stems and any big leaves of herbs and let cool five minutes. Transfer ingredients to blender and puree for at least three minutes on high. Return to pan and whisk in remainder of butter, one teaspoon at a time until well incorporated. Set aside.

Salt and pepper skin side of duck breast

Place into 400 degree oven in the same pan for five minutes, still skin side down

Remove from oven and let rest for five minutes

To serve flip duck over so that skin side is now up.

Slice each breast on the diagonal leaving behind the juices on the cutting board, and serve on top a generous smear of the cherry reduction.

In a few short days, the world has become a very different place. A couple of weeks ago shops and restaurants were bustling, children were busy with school work and older students were making plans for their graduation celebrations.

Drew Gahagan perked up as a customer walked through the doors of his business, the Village Oven in downtown Brunswick.

For residents of the Golden Isles, the feeling is familiar — an unease resting in the pit of the stomach, a dark, looming cloud on the horizon.