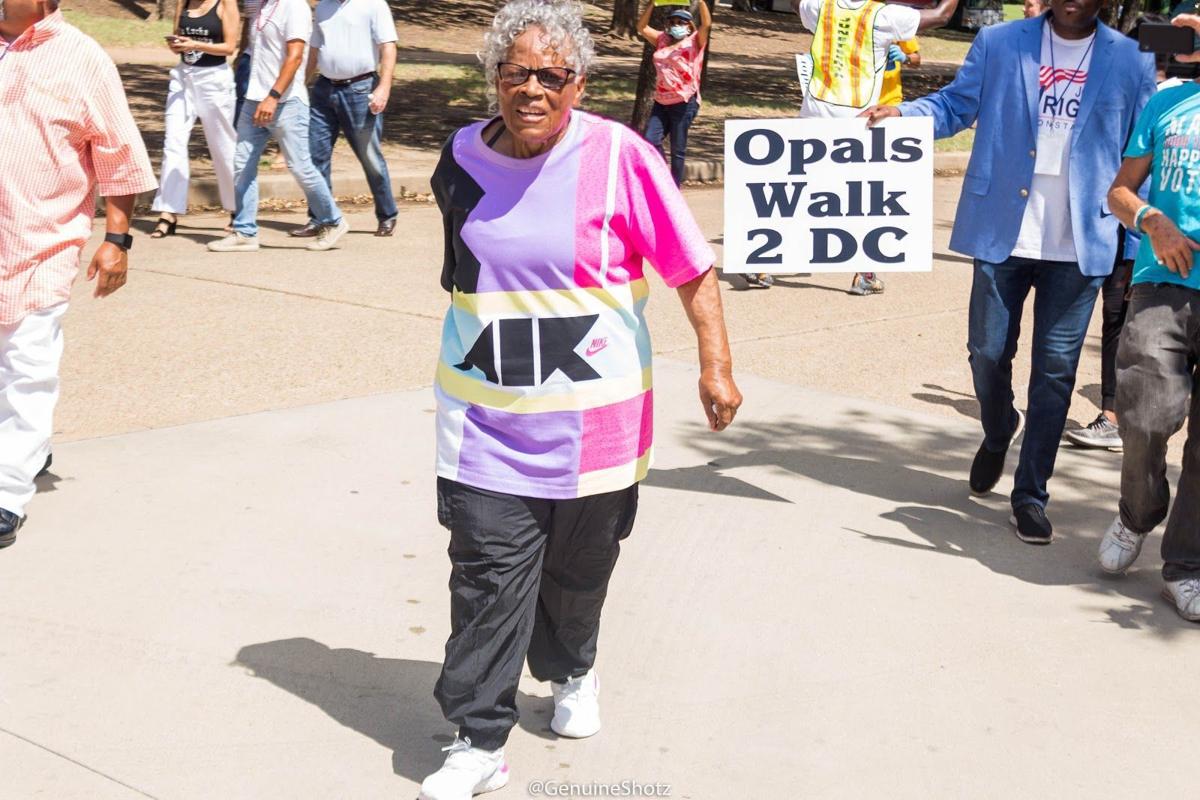 Opal Lee, known as the “Grandmother of Juneteenth” has for many years raised awareness about the historic event and launched in 2016 a campaign called “Opals Walk 2 DC.” Sept. 26 was declared Opal Lee Day in Brunswick and she will participate in a virtual event this year. 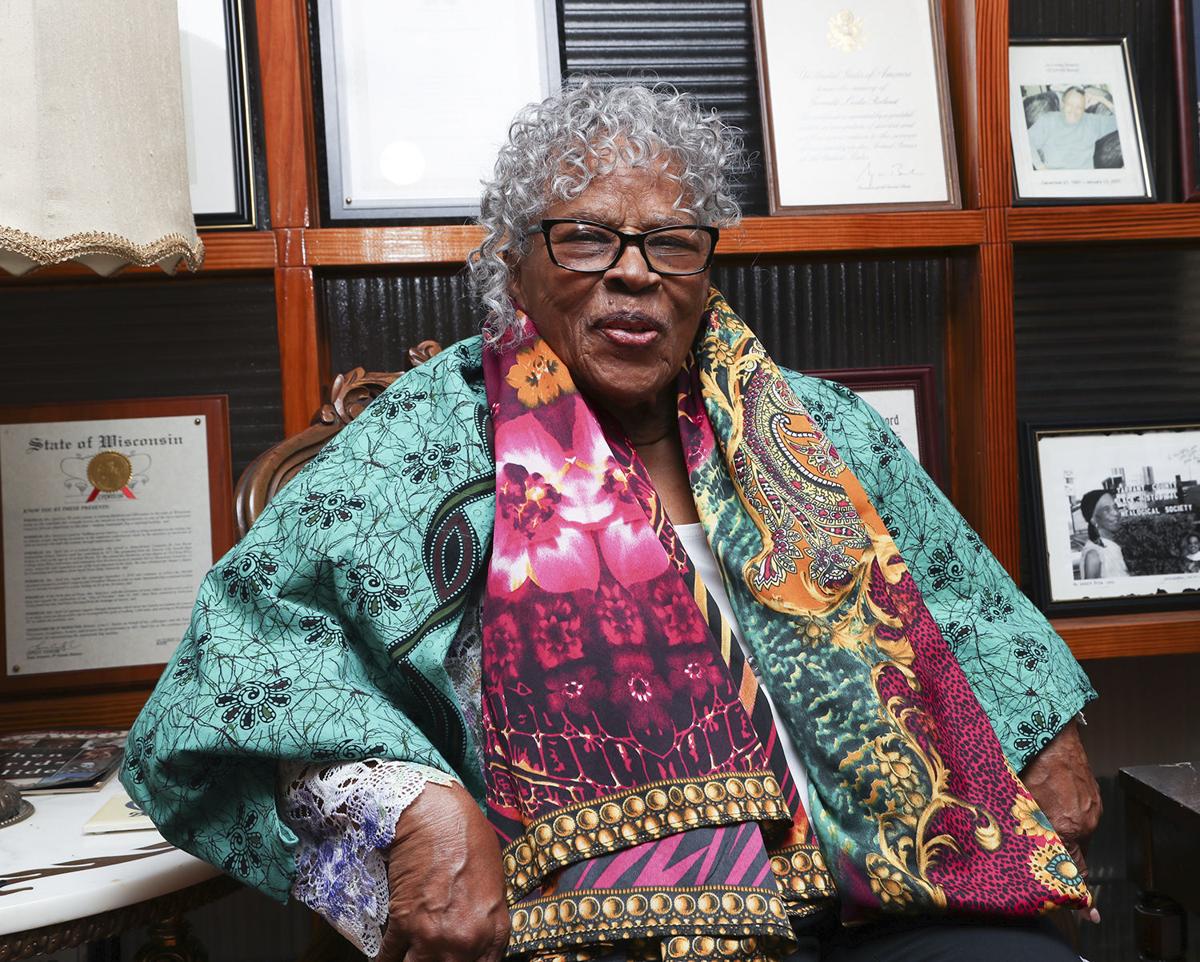 Opal Lee, known as the “grandmother of Juneteenth,” visited Brunswick in 2020 and now Sept. 26 is officially Opal Lee Day. A virtual program will be presented by the local Juneteenth Committee and co-hosted by the College of Coastal Georgia.

Opal Lee, known as the “Grandmother of Juneteenth” has for many years raised awareness about the historic event and launched in 2016 a campaign called “Opals Walk 2 DC.” Sept. 26 was declared Opal Lee Day in Brunswick and she will participate in a virtual event this year.

Opal Lee, known as the “grandmother of Juneteenth,” visited Brunswick in 2020 and now Sept. 26 is officially Opal Lee Day. A virtual program will be presented by the local Juneteenth Committee and co-hosted by the College of Coastal Georgia.

For many African-Americans, the recognition of Juneteenth as a federal holiday this year brought a sense of validation and healing. Now officially observed on June 19, the date commemorates the liberation of the final slaves living in Texas. That occurred on June 19, 1865, a far cry from the original Emancipation Proclamation, which was issued on Jan. 1, 1863.

While the observance has been a long time coming, it’s still incredibly poignant says Titania Cook, director of Juneteenth-GA, headquartered in Brunswick.

“It’s so important that Juneteenth became a federal holiday. That’s the day we celebrate our independence. July 4th, 1776, is celebrated every year, but African-Americans were not free until June 1865. That’s when the last slaves were free in the United States,” Cook said.

“But this is important for everyone, not just African-Americans. None of us are free until we’re all free. And we can’t move forward from our past until we acknowledge it. It’s not just a ‘Black holiday,’ it’s an American holiday. It wasn’t just African-American lives that were lost during slavery, Jim Crow and the Civil Rights era ... a lot of White people sacrificed their lives too. People of all races did.”

Cook has long been an advocate for moving forward in a sincere and unified way. Prior to moving to Brunswick, she spent years working to gain recognition for Juneteenth in Virginia. Through her time as an activist, she found herself continuously inspired by one bright light, Opal Lee.

Lee, who has been dubbed the “grandmother of Juneteenth,” is a Texas native who spearheaded the cause, rallying for recognition of the date as a federal holiday for decades.

She promoted the idea by leading 2.5 mile walks each year, representing the 2.5 years it took for news of the Emancipation Proclamation to reach Texas. At the age of 89, Lee conducted a symbolic walk from Fort Worth to Washington, D.C., leaving in September 2016 and arriving in Washington in January 2017.

Her work proved invaluable, and she was on hand for the signing of Senate Bill S. 475 by President Biden this year, which made Juneteenth the 11th federal holiday. Throughout her years of social justice work, Lee traversed the country. She even made a stop in Brunswick in September 2020, at 93 years old.

“There are so many reasons that it was important to honor Ms. Opal Lee. She has sacrificed so much and is truly a pioneer. Her legacy inspired our Mayor Cornell Harvey to declare Sept. 26 Opal Lee Day forevermore. So now it’s an annual event,” Cook said.

While the Juneteenth committee had hoped to be able to host Lee in-person this year, the persistence of the pandemic made that impossible. So instead, they have organized a virtual program which will be held throughout the day on Sept. 26. The events will be broadcast live from the Juneteenth-GA Facebook page and will feature Lee, who will be streamed in from her home in Texas.

“We had to get creative with this, but we have a great virtual program. The first part will be broadcast from Emmanuel Baptist Church on St. Simons Island. Ms. Lee will be in attendance virtually during that program, and Mayor Harvey will issue his proclamation declaring it Opal Lee Day,” Cook said.

The second program will be streamed at 6 p.m. and will feature various speakers, as well as a play titled, “The Abolitionists’ Museum,” directed by Sheri Bailey, Cook’s mentor from Hampton Rose, Va.

Bailey has been an activist in her home state and helped guide Cook’s early work in the movement.

“Our mission is to help America heal from the wounds of slavery without shame or blame. When Titania made her move to Georgia, she took that work with her,” Bailey said, speaking via telephone from Virginia.

“The way we do this work is through theatre. We present this difficult history and have a post-show conversation with the audience about these issues.”

In this production, “The Abolitionists’ Museum,” eight prominent wax figures come to life to discuss and debate what should be done with a Confederate flag that has made its way into the museum.

“The eight figures represented are Nat Turner, David Walker, Harriet Tubman, Harriet Beecher Stowe, Sojourner Truth, John Brown, Frederick Douglass and Abraham Lincoln,” Bailey said. “This will be presented as a mix of in-person actors and videos because again, we had to be creative. Then, we will have our post-event discussion.”

For details and sponsorship opportunities, those interested can visit the Juneteenth-GA Facebook page. That site will also allow participants to join the Sept. 26th festivities. And Cook hopes that the whole of the community will turn out to support the historic cause.

“The federal holiday was just first observed in June 2021, so we’re still in that moment where it’s important to acknowledge this piece of American history,” she said. “It’s important to have this platform and to have the entire community come together, all races and all people ... because again, Juneneeth is a holiday for all Americans.”

Opal Lee Day, honoring the Juneteenth pioneer, on Sept. 26. There will be a virtual program including a broadcast from 11 a.m. to 12:30 p.m. at Emmanuel Baptist Church and from 6 to 9 p.m. College of Coastal Georgia. It will be livestreamed on its Facebook page Juneteenth-Ga-Brunswick. Organizers may be reached by emailing bwkjuneeteenth@gmail.com or call 912-230-0856. To donate, visit gofundme.com and searching for Opal Lee Day.