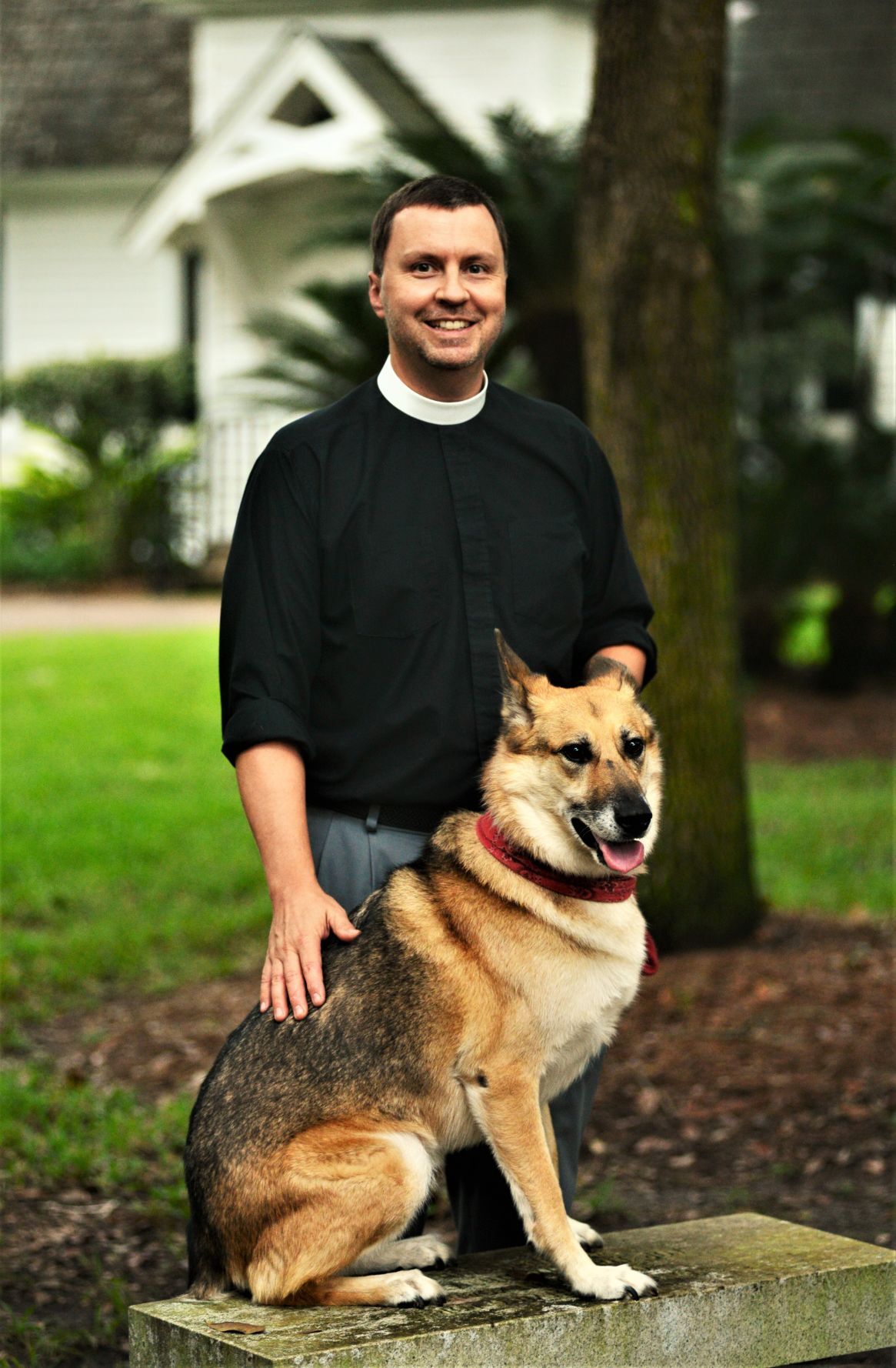 The Rev. Tom Purdy, priest of Christ Church Frederica, sits with his dog, Scarlette, outside of the church on St. Simons Island. 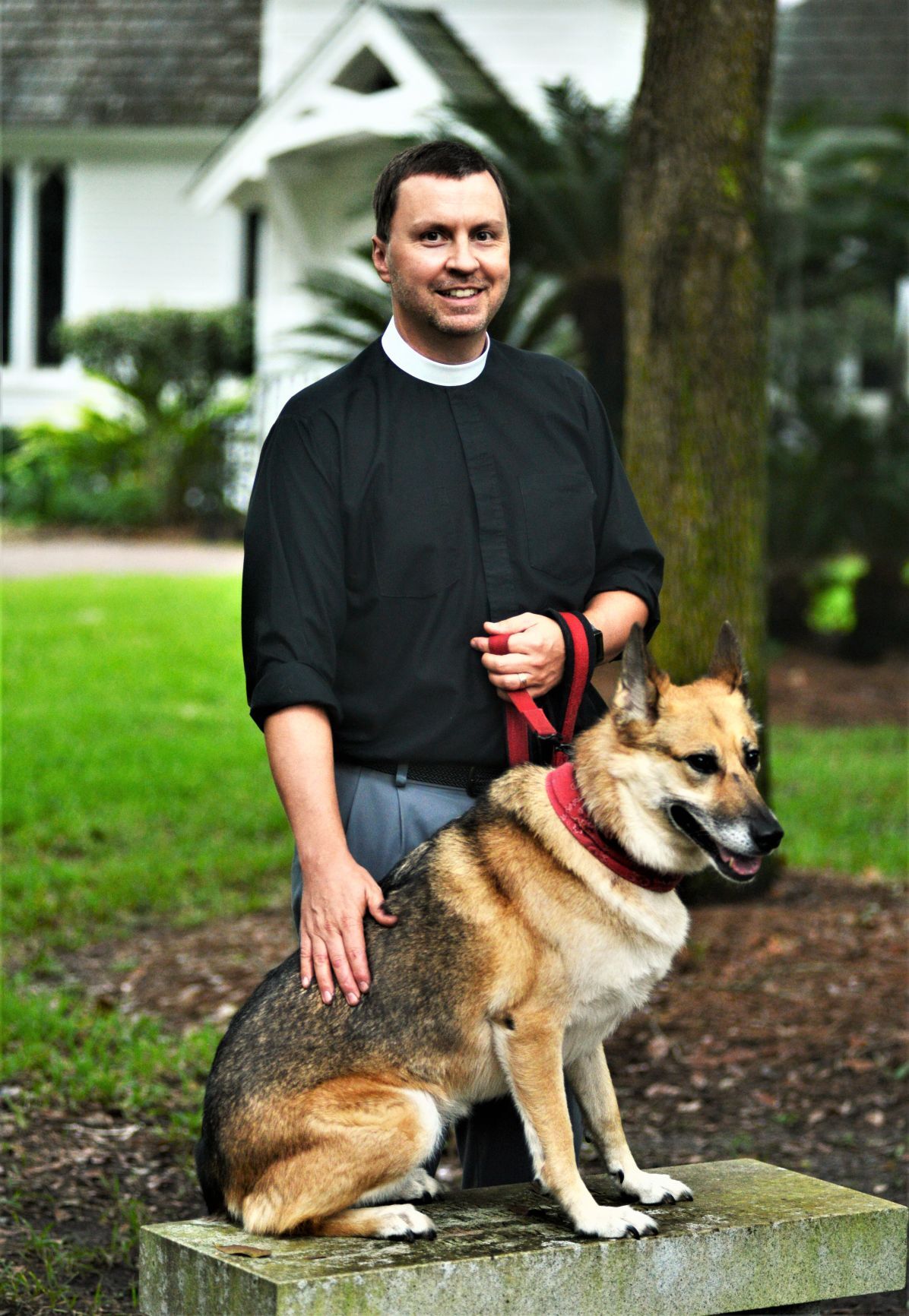 Father Tom Purdy, priest at Christ Church Frederica, sits with his dog Scarlette outside of the church on St. Simons Island.

The Rev. Tom Purdy, priest of Christ Church Frederica, sits with his dog, Scarlette, outside of the church on St. Simons Island.

Father Tom Purdy, priest at Christ Church Frederica, sits with his dog Scarlette outside of the church on St. Simons Island.

Although the Christ Church Frederica blessing of the animals on tomorrow is a first of its kind event, the Rev. Tom Purdy has built up experience from another church activity.

Not that he hasn’t blessed animals. In an average year, the congregants bring 75 dogs, a couple of dozen cats and assorted other pets to be blessed at the church. But unlike past years, the blessing will be a drive-thru this year. Because of the pandemic, the church’s clerical staff will say prayers and pronounce blessings over the animals in each car.

But Purdy and other officiants have built-up drive-thru experience because the pandemic has compelled members to take communion from their cars. And some bring their dogs, Purdy said.

The humans get the elements of communion and each dog gets a biscuit, he said.

But Purdy has seen more species than dogs at the annual blessing.

“I’ve blessed spiders, a snail, honeybees and horses. No snakes yet. I’ve been hoping for it,’’ he said.

That way the rumor could start that Christ Church handles snakes, he joked.

Also, no cows which is regrettable because combined with the bees it would be a land of milk and honey.

It’s not as though he went out to a beekeepers’ hives and blessed the little stingers from a safe distance. Instead, a church member who is a beekeeper brought in a demonstration hive with the entrance blocked and bees buzzing inside.

Purdy says blessing the animals is an important part of the ministry because they mean so much to their owners. They appreciate the prayers for their pets’ welfare and appreciate that God is looking out for them.

In some cases, such as empty nesters or those who have lost a spouse, animals are their closest remaining companions, he said.

Pets are also important to husbands and wives with children still at home.

“Our household (is) dog people,’’ Purdy said. “We give thanks for our dogs on a regular basis.”

Losing a pet can be devastating, and the church has made it known the ministers will pray for sick or dying animals, he said.

“People call when they’re having a dog or cat put to sleep,’’ he said.

His family did the same before one of their dogs was euthanized. He called a colleague who came and prayed with his family before he took the dog to the vet.

The blessing has even gotten some people back in church including a couple who began attending week day services after they had their dog blessed and were moved.

“All because of a blessing for their poodle,’’ he said.

Blessing animals is not something new. St. Francis was the patron saint of animals and Anglican pastors have prayed for livestock, such as horses, cattle and sheep, for hundreds of years, Purdy said.

The Bible tells us that the animals were Adam’s companions and that the angels and wild animals ministered to Jesus’ needs in the wilderness, Purdy said.

The blessing will be Sunday in the churchyard from 4 until 5:30 p.m. As with the communion services, vehicles will enter the cemetery from Frederica Road, stop at a designated point for the blessings and exit onto Stephens Road.