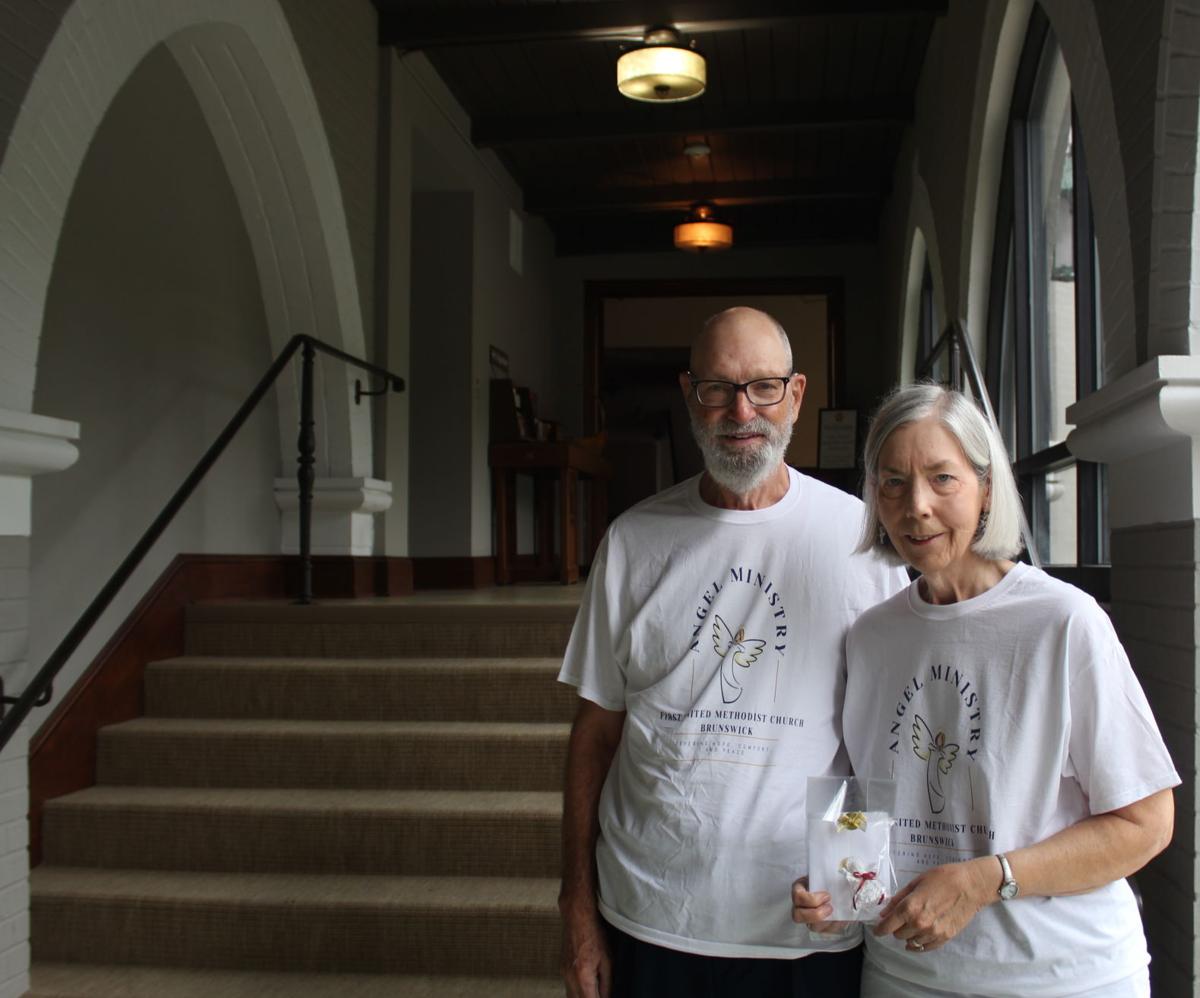 Alan, left, and Ellen Huth stand in the foyer of First United Methodist Church in Brunswick. Ellen is holding one of the angels the ministry sends to those who need to be uplifted in trying times. 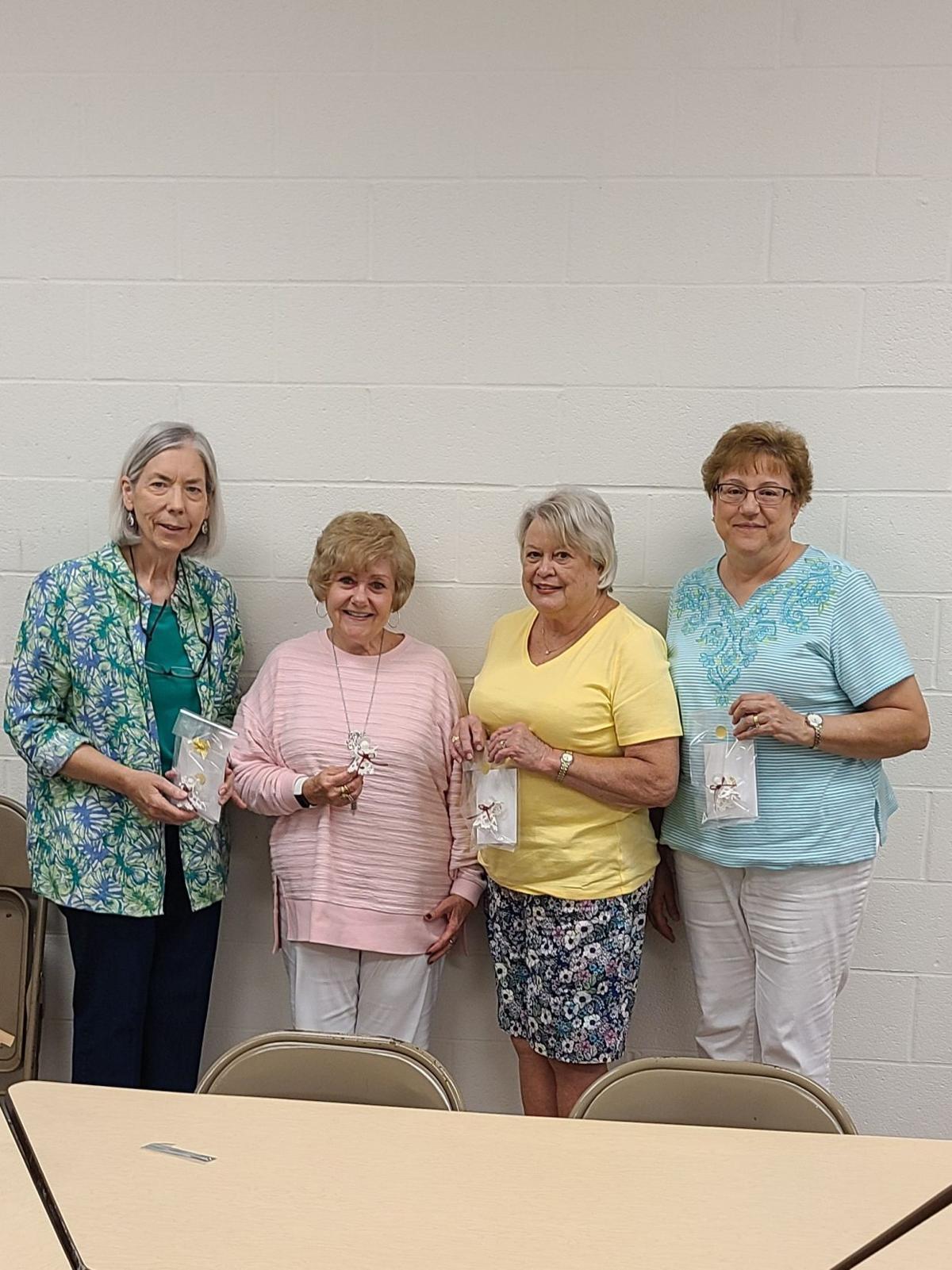 Alan, left, and Ellen Huth stand in the foyer of First United Methodist Church in Brunswick. Ellen is holding one of the angels the ministry sends to those who need to be uplifted in trying times.

Ellen and Alan Huth are in sync. And it’s no surprise after nearly 50 years of marriage.

On a dreary Thursday afternoon, the couple was seated in the reception area of First United Methodist Church in Brunswick. Both were clad in matching shirts emblazoned with the outline of an angel. The Rev. Wright Culpepper, pastor of the church and executive director of the local umbrella charity FaithWorks, joined them.

Ellen moved her hands through the materials in front of her, holding up a small crocheted white angel.

For her, as they do for so many, depictions of the celestial beings offer a sense of comfort and peace, especially during troubling times in life. And, there’s certainly been plenty to go around. But even before the coronavirus pandemic took hold of the world, the Huths were looking to use angels in a ministry that would provide comfort to others.

“About 10 years ago, we were living in the Lawrenceville area of Atlanta and somehow I came across one of these crocheted angels,” she said. “I just started giving them away to anybody who was having a difficult time or anybody that I felt needed an angel.”

The couple moved to Brunswick four years ago. And, of course, they found many residents here were also in need of these comforting keepsakes.

“Then, COVID came along and at the time we did not have it as part of the church, so we took it upon ourselves to give bulk angels out to hospital staff and patients,” Ellen recalled. “For the most part, it was our own personal angel ministry.”

The Huths wanted to grow the angel mission but found themselves lacking manpower and financing. The two looked into started an official nonprofit but those come tons of red tape. That’s when Alan suggested speaking to Rev. Culpepper about making the program an official part of the church.

“In June, Wright announced it to the church congregation that we were having an angel ministry. That we would be accepting donations from anyone in the congregation,” Ellen said. “So we were able to start with that funding. And I have a precious aunt in Virginia who has graciously donated quite a bit for the angel ministry. I gave her one of my mom’s angels after my mom passed. She says that it’s right beside her bed.”

After becoming an official ministry at First United Methodist Church, the program gained a little steam.

“We set up a special fund that we promote from time to time, we have little boxes we put up near the exits of the church as gentle reminders,” Culpepper said. “Some things strike people and it ‘plucks their strings’ so to speak, but there’s a group of people that want to be a part of something and this is something that’s tangible for them to do.”

Donations allowed them to purchase the materials needed to form the angel packets. In addition to the angel itself (either crocheted or silver, like an ornament), the Huths add a card featuring an angel and referencing Psalm 19. The envelope says “for someone special.” The message inside the card notes that the angel is designed to “offer hope, comfort and peace ... from someone who cares about you.”

Since joining the church, the packages have been sent to the hospital staff, Magnolia Manor, Sparrow’s Nest, the health system’s Ribbon of Hope program, as well as to private individuals. All told, they’ve sent out more than 240 angel packets.

“In the future, we’re going to have a committee that selects where they go. We’re just doing organizations now as we grow. But later we’re going to do individuals too,” Alan said.

But they’re looking to do even more. The Huths are hopeful that more churches and individuals will get involved, both in terms of donating and distributing the angels.

“We really want this to be something for the entire community,” Alan said.

They hope that more people will get involved and are extremely grateful for those who have already contributed in so many ways. From Rev. Culpepper and his son, Bill, who serve as ministers to the church’s program directors and officers who continue to spread the word.

And even though it may seem a small token, the Huths feel that these are powerful reminders of the love of God.

“It makes people feel like they’re cared about ... and when we get cards back they tell us they have them displayed in a prominent place in their home or somewhere they can see them,” Alan said.

Ellen agrees and feels the ministry offers those who want a way to reach out to others an avenue for doing just that.

“We believe that God works through people here on earth, and that he is working through us and the Angel Ministry to spread the message of hope, comfort and peace,” she said.

First United Methodist Church's Angel Ministry is looking for donations as well as volunteers to package and deliver angels to those in need. Organizations who would like angels are also being sought. For more information, email Ellen Huth at ellenhuth@att.net. Donation checks may be made out to First United Methodist Church with Angel Fund noted in the memo. They may be sent to 1400 Norwich St., Brunswick GA 31520.