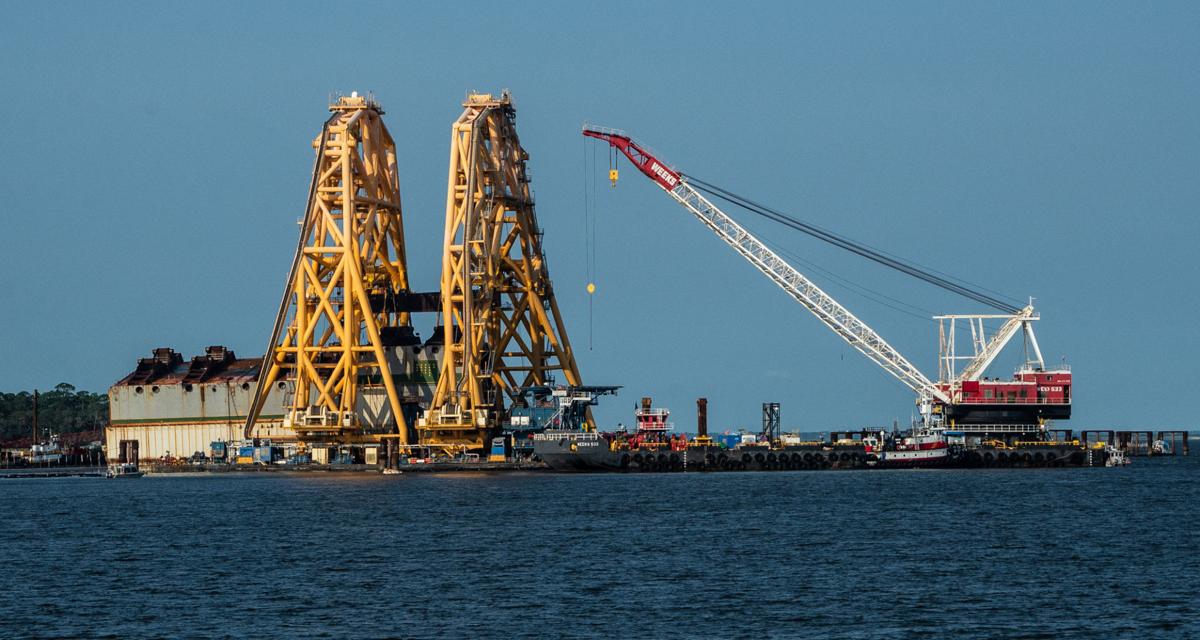 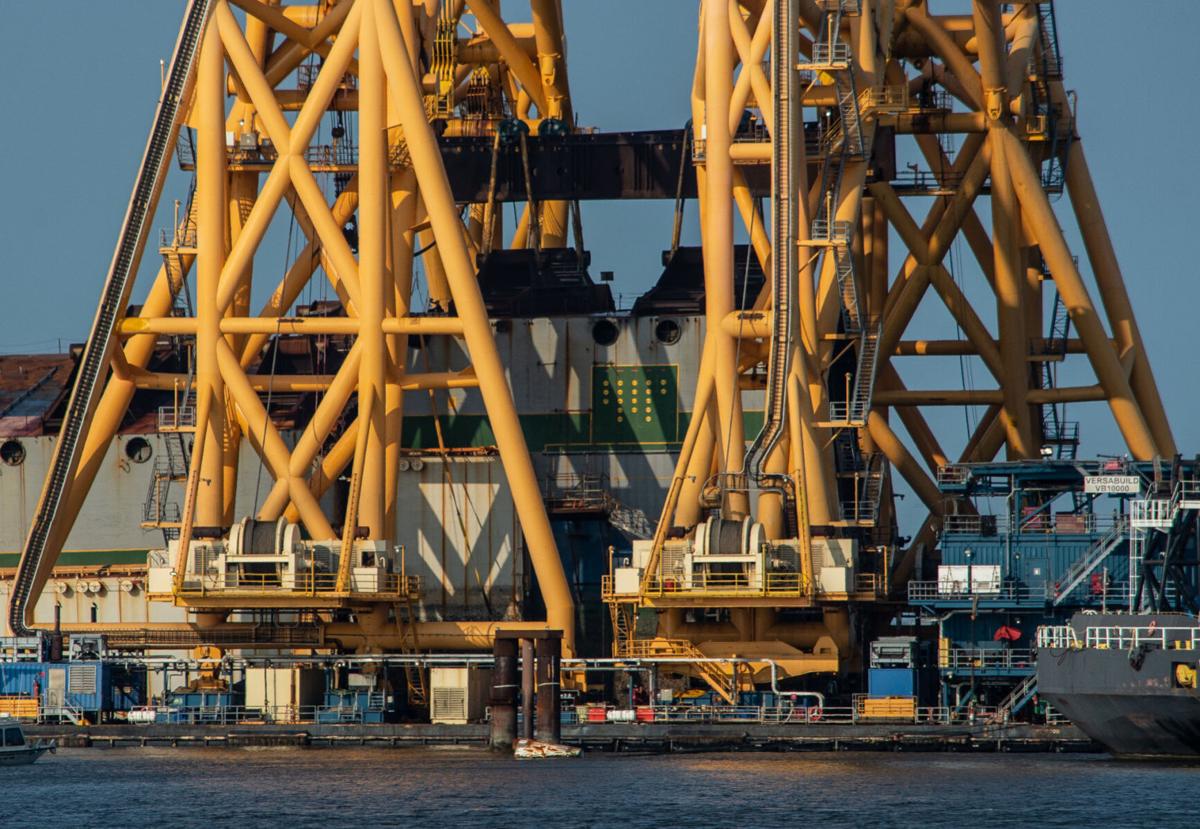 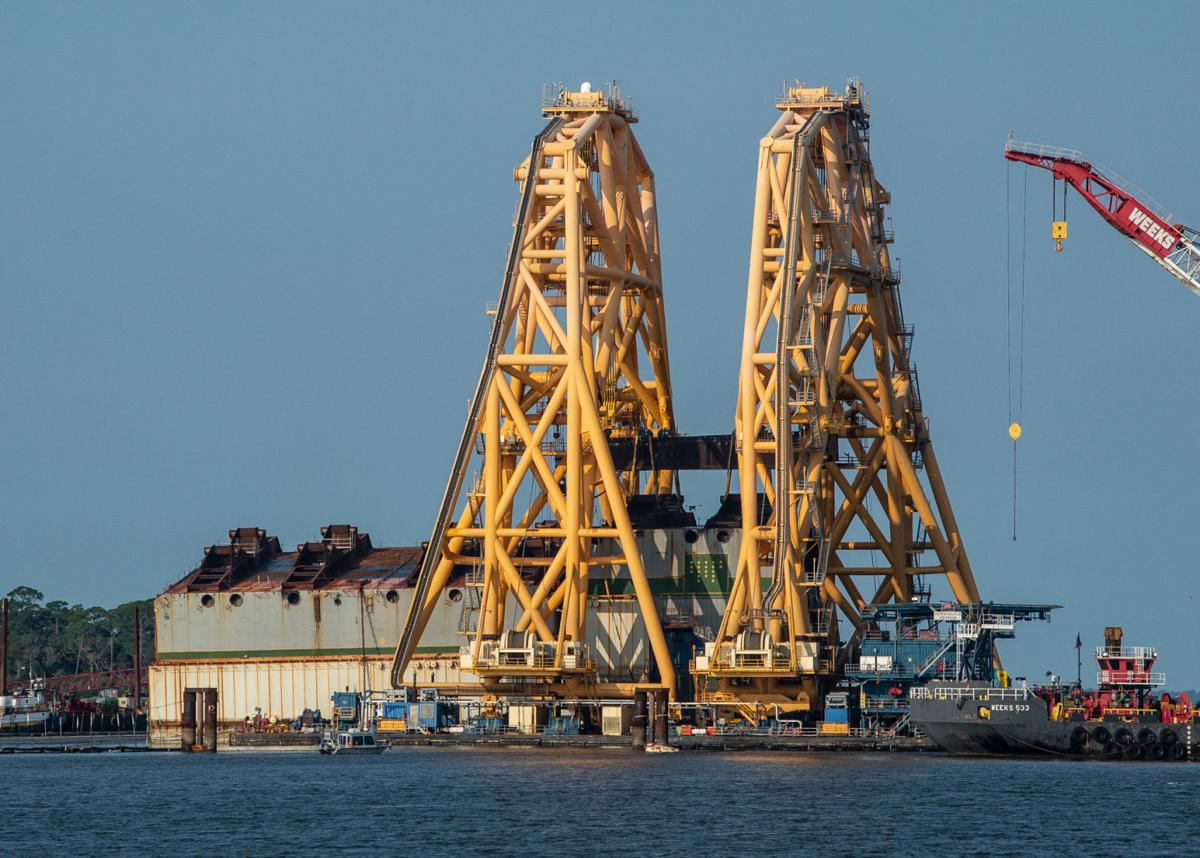 With breakthrough attained Friday night on the next-to-last section of the shipwrecked Golden Ray, a flotilla of pollution control teams spent Saturday fighting to contain the anticipated oil discharge into the St. Simons Sound, according to Unified Command.

A massive cutting chain tore through the last steel sheet binding Section 6 to the remainder of half-submerged scrap metal heap at around 9:30 p.m., making relatively quick work of the next-to-last cut into the shipwreck.

The resulting discharge created a large dark “ink blotter” of oil on the surface of the water inside the 1-mile-perimeter environmental protection barrier (EBP) that surrounds shipwreck, said U.S. Coast Guardsman Michael Himes, spokesman for Unified Command. The EPB is lined with a dual layer of oil retention boom on the surface and sturdy mesh netting below to contain loose vehicles and other large debris from the shipwreck.

Some fuel sheens with oil globules slipped beneath the EPB’s oil retention boom, sucked beneath the surface by Saturday’s swift incoming tides, Himes said. High tide at the St. Simons Sound was at 2:42 p.m.

According to Himes, the operation’s flotilla of cleanup crews has managed to contain and collect most of the discharged oil within the area surrounding the shipwreck. The majority of the oil has been retained inside the EPB, Himes said, as evidenced by the large dark oil cloud on the surface of the water there. That oil is being channeled by the incoming tides to the EPB’s western end, where it is being collected in a current buster — a large V-shaped craft designed to corral and collect oily surface water, Himes said.

Utility tugs inside the EPB are spraying water on the surface to help channel the oily water toward the current buster. Additionally, pollution control crews are employing oil skimmer boats and absorbent boom inside and outside of the EPB to collect oily water, he said. Another current buster is collecting oily water beyond the EPB, towed by boats connected to either end, he said.

A helicopter has hovered above scene throughout the day, from which veteran environmental cleanup spotter Ray McKeldey has directed the movements on the water below, Himes said.

“So far, what we’ve seen is a significant amount of oil inside the EPB that is being retained by the EPB,” Himes said. “We’ve seen some oil entrained beneath the EPB that is going out to our vessels that are standing by to receive it, and there is some oil getting beyond them because of the swift currents. Ray is up there acting as our eyes on the water and tracking it.”

Any oil that reaches shoreland marshes will be treated with sphagnum moss, as in past discharges, Himes said. No oil had been detected in the marsh Saturday afternoon, he said.

But Himes said the EBP appears to be working effectively during this discharge, as indicated by the large dark oil cloud within it.

“What we are seeing is the barrier doing its job,” Himes said. “The ink blotter means the barrier is retaining the oil. Otherwise, we would see long ribbons of (dark) oil outside the EPB and we’re not seeing that.”

The salvage phase to place Section 6 on a barge for transport out of the sound remained on hold Saturday while crews addressed the oil discharge, Himes said.

Separation of Section 6 marked one more crucial step toward completely removing the Golden Ray’s half-submerged wreckage from its lair in the waters between St. Simons and Jekyll islands. It was achieved by the sheer force of tension applied by the VB 10,000 crane vessel’s system of winches, wire rigging and pulleys.

The 3,695-metric-ton mass of steel is hanging suspended by tension wire from the arching rafters of the 255-foot-tall VB 10,000.

At a compatible slack tide within the next couple of days, a dry dock barge will enter through a gate in the EPB and slide between the hulls of the of VB 10,000. The crane vessel will lower the section onto the barge deck. Salvage crews will descend and secure the section to the deck. Tugboats will then tow the barge and its cargo under the Sidney Lanier Bridge and up the Brunswick River. Its final destination is a dismantling site at 615 Bay St. on the East River in Brunswick.

The removal of Section 6 will leave about 153.5 feet of shipwreck still in the St. Simons Sound. For the folks at T&T Salvage who started cutting on the 656-foot-long shipwreck in November, that means one more cut and two more hulking sections to go before it is gone.

Section 6 is bound for a dismantling site at 615 Bay St. on the East River in Brunswick, where it will join the 3,640-ton Section 3. Each of the four remaining sections will be cut up into about a dozen smaller pieces at the location, loaded onto a barge and transported via barge to the Modern American Recycling Services facility in Gibson, La.

Maritime engineers suspect these four middle sections suffered the brunt of any structural damage when the Golden Ray overturned on its port side Sept. 8, 2019, while heading out to sea with a cargo of 4,200 vehicles. The four outer sections all were transported via barge whole and directly to the MARS facility on the Louisiana Gulf Coast.

Cutting to remove Section 6 started eight days ago, in the predawn hours of July 22. Its duration matches the two most expeditious cuts in the salvage operation: the effort to separate the stern from Dec. 25 to Jan. 2; and the task of cutting away Section 2, March 7-15.

However, this comparatively smooth operation comes on the heels of the most grueling cut salvagers have encountered. Section 3 was finally cut away July 1, after eight arduous weeks that included constant encounters with dense 2-foot-thick steel brackets along the cut path and a massive internal fire after a welder’s torch sparked an inferno fueled by hundreds of vehicles within.

In preparation for the separation and lift, Unified Command increased its fleet of oil pollution cleanup crews to about 20 boats on the waters surrounding the shipwreck.

Those who see fuel sheens or oil globules on waters near the shipwreck are encouraged to report it to the U.S. Coast Guard National Response Center at 800-424-8802. Those spot shipwreck debris on local shorelines are asked to call the debris hotline at 912-944-5620.

Unified Command reminds recreational boaters that vessels are prohibited within 150 yards of the EPB.