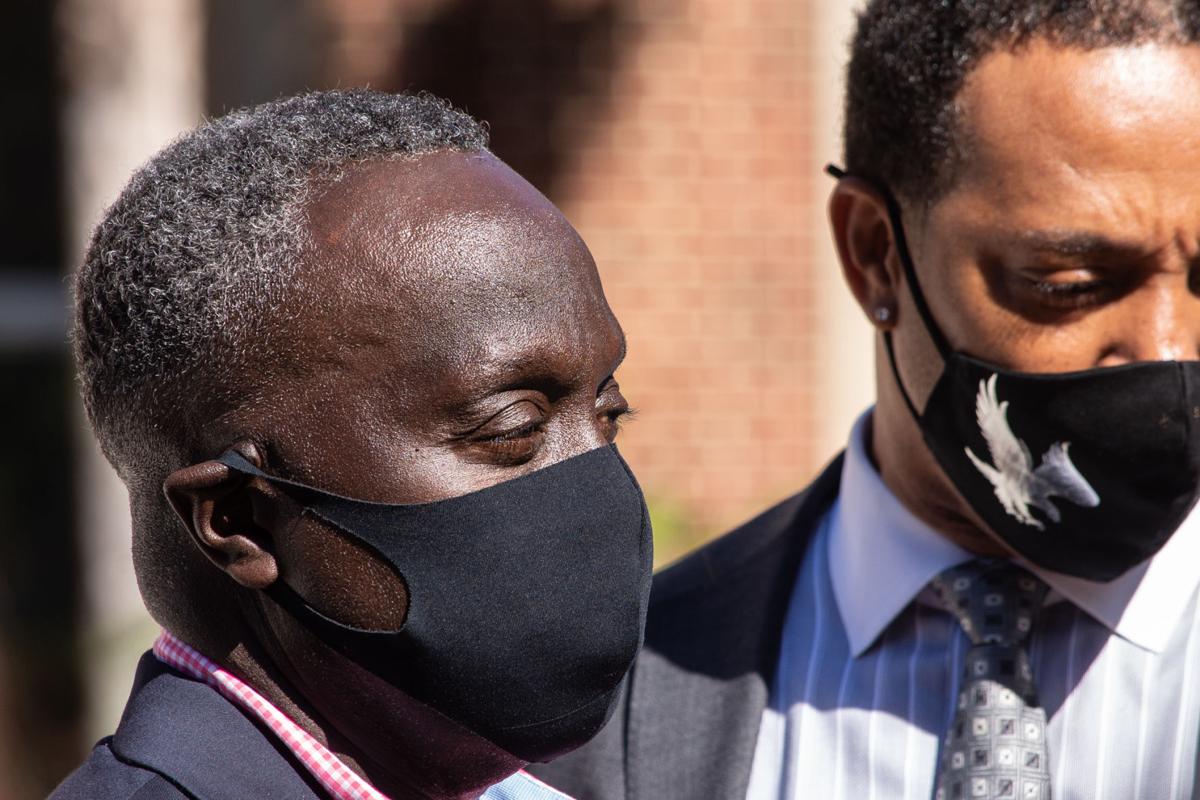 Marcus Arbery Sr. stands outside the Glynn County Courthouse during the noon break in the trial of the three men accused of murder in his son's death. 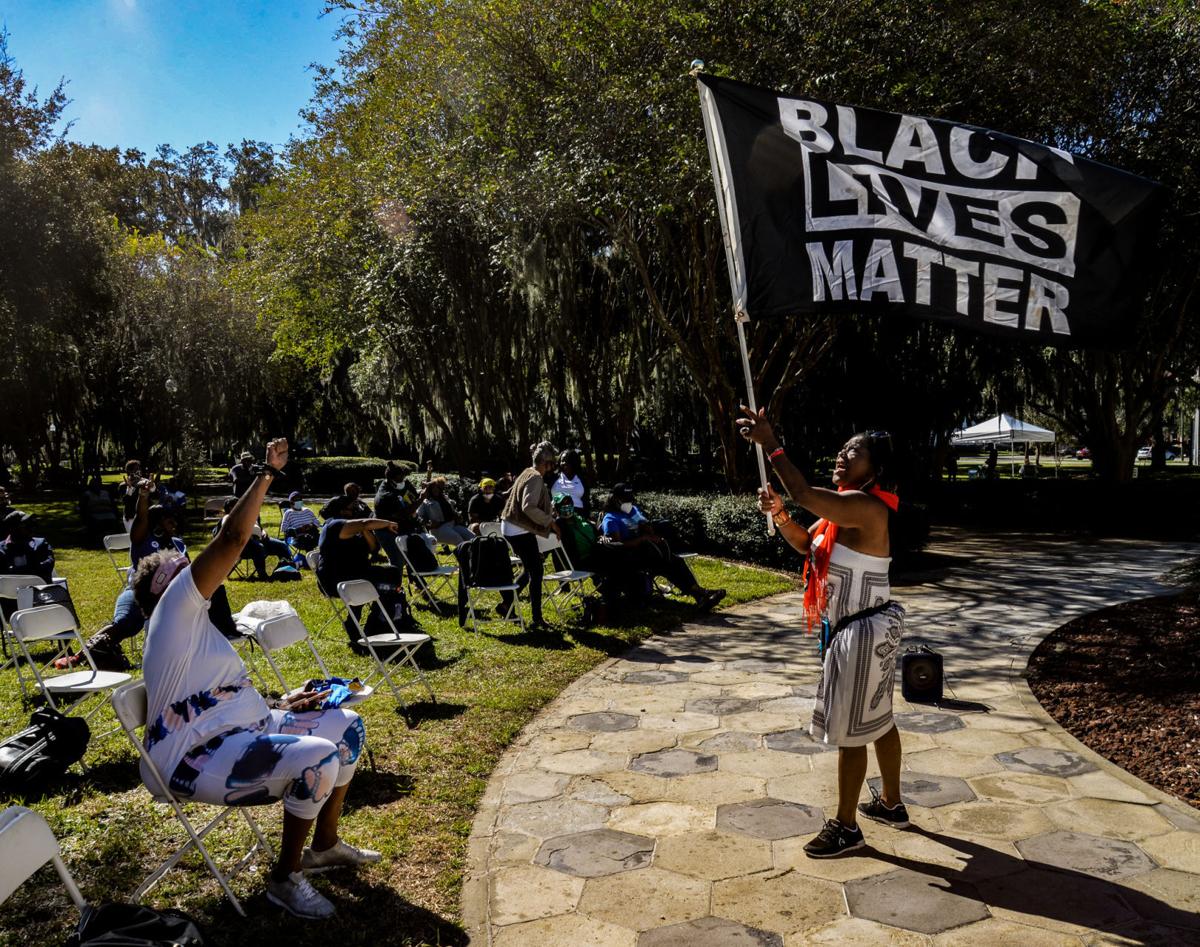 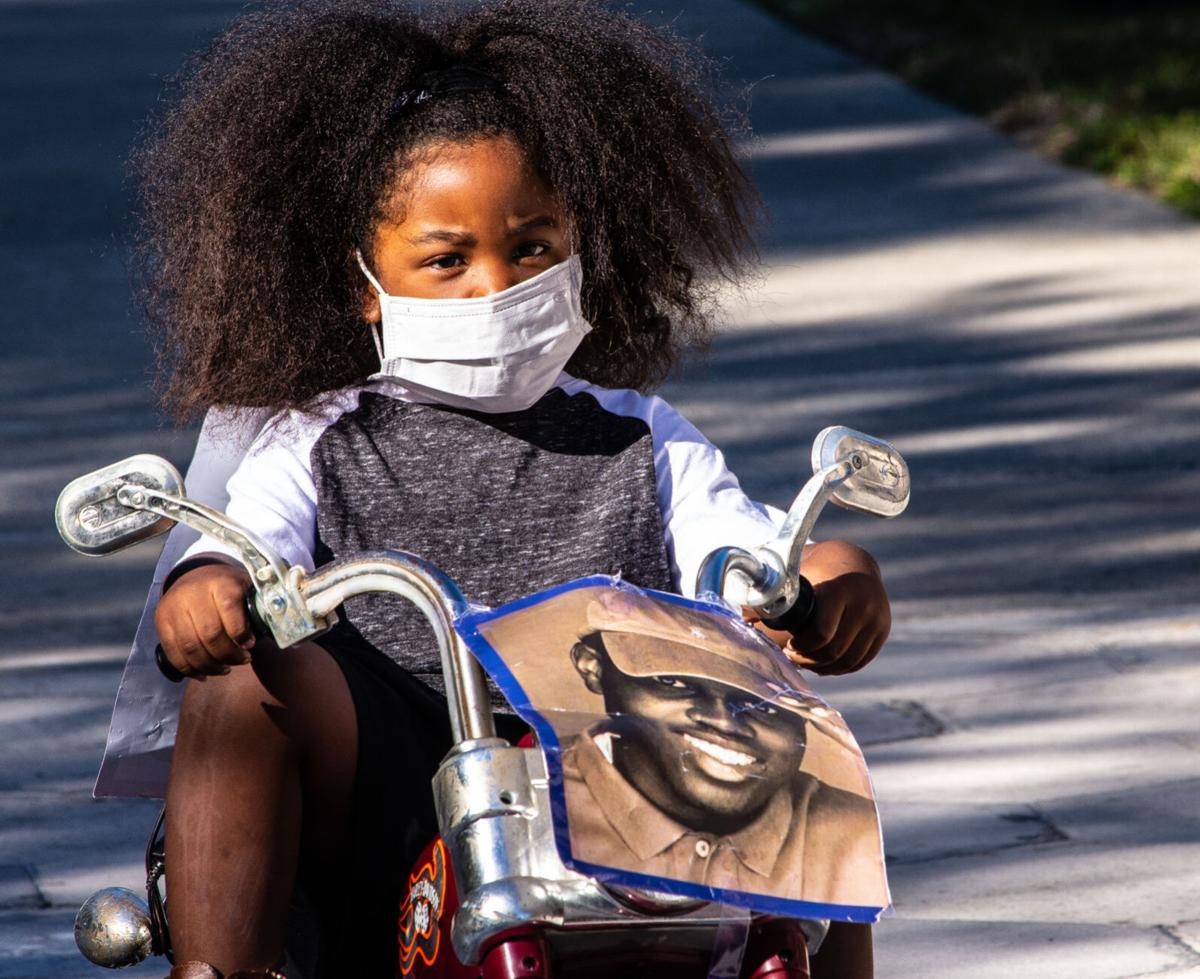 Kawan Ward, 3, rides a battery-operated motorcycle with an Ahmaud Arbery picture mounted on the handlebars as his family arrives Tuesday in front of the Glynn County Courthouse. 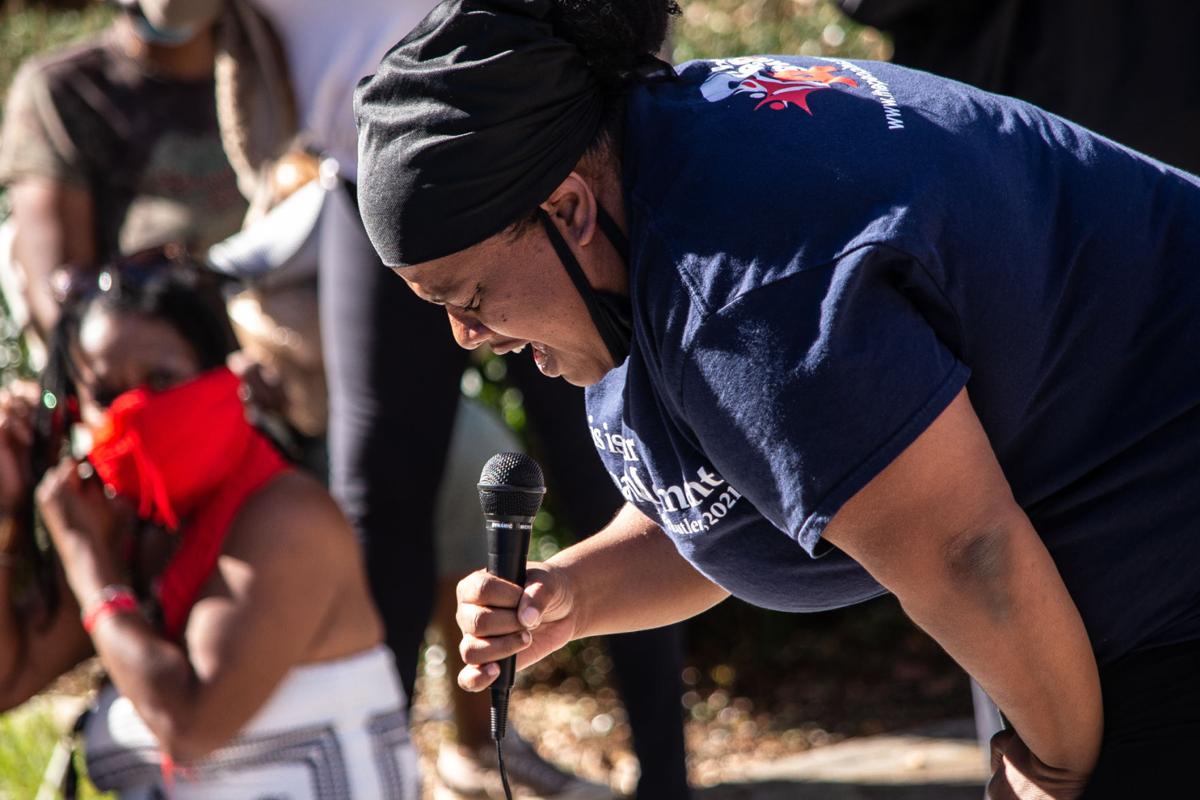 Kimberly Williams of Atlanta bends over as she shouts out a prayer for God to end generational racism. She was among a crowd of activist in front of the Glynn County Courthouse

Marcus Arbery Sr. stands outside the Glynn County Courthouse during the noon break in the trial of the three men accused of murder in his son's death.

Kawan Ward, 3, rides a battery-operated motorcycle with an Ahmaud Arbery picture mounted on the handlebars as his family arrives Tuesday in front of the Glynn County Courthouse.

Kimberly Williams of Atlanta bends over as she shouts out a prayer for God to end generational racism. She was among a crowd of activist in front of the Glynn County Courthouse

However, in response to questions from defense attorney Robert Rubin, the man added that in a trial room situation, “as a scientist, I could follow the facts.”

News media accounts of the case involving three White men accused of murder in the killing of a Black man have helped form his opinion more than the chilling video, he said during individual questioning.

“It sounds like you’re balanced,” responded Rubin, one of two attorneys representing Travis McMichael. “Is that fair?”

“I’m not really sure that’s where I am,” the man answered. “Someone was murdered. That’s all I know.”

The exchange between a potential juror and the defense attorney highlighted the familiarity and strong feelings that run through the community where McMichael, 35, his father Gregory McMichael, 65, and 52-year-old William “Roddie” Bryan are on trial for felony murder in the death of Arbery.

In an effort to impanel an impartial jury, the Glynn County Superior Court Clerk mailed jury summonses to 1,000 residents for this trial. Before lunch Tuesday, a process that was projected to take more than two weeks before a jury is impaneled was already behind schedule.

Judge Timothy Walmsley was visibly upset with the snail’s pace of proceedings. The new panel of 20 who were scheduled to begin questioning from attorneys at 1 p.m. Tuesday were sent home. Walmsley instead focused on the nine remaining prospective jurors from the morning’s session.

“I do not have the ability to just store people or keep them longer than planned,” the judge said. “I am not comfortable with this… At the rate we’re going, all these plans we have to move these panels through are not going to work.”

The second day of jury selection began Tuesday with Walmsley thanking the new panel of 20 prospective jurors who gathered in the Glynn County Courthouse’s Jury Assembly Room. Walmsley noted the high-profile nature of the trial of the two McMichaels and Bryan. The defense will claim self-defense in the course of a citizen’s arrest in the killing of Arbery on a public street in the Satilla Shores community on the Sunday afternoon of Feb. 23, 2020.

“Many of you knew when you got your summons that you would be involved in a case that in this community, is of some note,” Walmsley told the panel, who were seated 6 feet apart in the jury room to accommodate COVID-19 social distancing precautions.

When the judge asked whether they entered the jury selection process with impartial minds regarding the prosecution and defense of the case, four of the 20 raised a hand to indicate they had formed an opinion.

As the jury process began Tuesday morning, the father-and-son McMichaels and Bryan sat with their respective attorneys on the opposite side of the room from prosecuting attorney Linda Dunikoski, the senior assistant prosecutor with the Cobb County DA’s Office.

Perhaps not surprisingly in this community of 85,000, many of the 20 jurors who were questioned Tuesday appeared familiar with the people and the circumstances behind this trial.

Travis McMichael shot Arbery three times at close range with a 12-gauge shotgun near Holmes Road and Satilla Drive as the two men struggled for possession of the McMichael’s gun. The bloody confrontation culminated a pursuit through the streets of Satilla Shores, Arbery running and the McMichaels and Bryan chasing him in pickup trucks.

Bryan recorded the deadly conclusion on his cellphone, a video that sparked national outrage and cries of racial injustice when it leaked online in May of that year. Georgia Bureau of Investigation agents arrested the McMichaels on May 7 of 2020 and arrested Bryan two weeks later. The McMichaels said they suspected Arbery of burglary when they armed themselves, jumped in a pickup and chased him after he ran past their residence.

“He’s a friend of my father’s and he’s been over to our house multiple times,” he said.

Yet another prospective juror said he knows George E. Barnhill, the Waycross DA who was assigned the case after Brunswick DA Jackie Johnson recused herself because of Gregory McMichael’s ties to her office. Another prospective juror knows current Brunswick DA Keith Higgins, who defeated Johnson in a heated November election that was fueled by controversy over Johnson’s handling of the case. She has since been indicted on malfeasance charges, alleging she interfered with the county police investigation on the day of the shooting by allegedly instructing detectives not to arrest the McMichaels.

Under questioning by defense attorney Jason Sheffield, four people said they hold negative feelings about Travis McMichael, and three harbored negative regard for his father.

The man who told Rubin he would not let his image of the deadly video cloud his objectivity also was among those who admitted to harboring negative opinions of the McMichaels. When Rubin pressed him further for opinions on the case, prosecuting attorney Donikoski objected.

“I’m not trying to get the witness to say anything, I’m just here to listen,” Rubin told the Walmsley.

At one point, Walmsley warned both the defense and prosecution to avoid asking potential jurors direct questions regarding their opinion on the case.

That said, one juror was dismissed for opining that all three defendants should be convicted on all charges, which include also aggravated assault and criminal attempt to commit false imprisonment.

Another woman said she has hearing problems and transportation issues, but noted that she has already made up her mind about the case.

“I saw the news footage and I saw the video footage of the crime … I think that they’re guilty,” she said.

She was dismissed without objection from the prosecution. Also dismissed was a graying retiree who said he is charged with the care of his ailing, elderly mother. Four total had been dismissed by late Tuesday afternoon.

A divorced Glynn County public school teacher who is a mother of two teenagers told Rubin she has seen the video enough times to “remember thinking I didn’t want to watch it again.”

The majority of her information on the case has come from Facebook media rather than traditional news sources, where most of the accompanying comments were critical of the defendants, she told Laura Hogue, an attorney for Gregory McMichael.

“At the very beginning, I was curious about it since it’s in our community,” she said. “Some of the things I’d post, I didn’t even read the entire article.”

Some jurors said they believe race played a role in Arbery’s killing.

“I think if it was a White guy running through the neighborhood, I don’t think he would have been targeted as a suspect,” one woman said.

One juror said “it probably wouldn’t have happened” if Arbery had been White.

“I feel like it could,” another said when asked if she thought the case had racial overtones.

A White gun owner who supports the Black Lives Matter movement said she would review the facts objectively as a juror.

“No one should have to fear going out because of their color,” she said. “I believe Black people don’t get treated the same as White people.”

Jurors were also asked their opinion on the Confederate flag. Travis McMichael’s pickup truck, the one in which he chased Arbery, featured a vanity plate with the Confederate emblem in a depiction of the old Georgia state flag.

“I don’t know if they understand how it may make other people feel,” one woman responded, when asked if persons are racist for displaying the old state flag. “Or they may feel that’s their heritage, but my own personal belief is not the same.”

Peaceful demonstrations continued for a second day on the stately, oak-draped grounds outside the courthouse. Led by members of the Washington, D.C.,-based Transformative Justice Coalition, the group engaged in spirited call-and-response slogans and lyrical chants. One such ditty made reference to the connection between Arbery’s death in southern Glynn County and the fate of three men inside the courthouse.

“We want justice!” they sang in cadence. “”Nothing else will do!

Alone amid dozens of empty folding chairs during the Tuesday lunch hour, a diminutive Annie Polite sat eating a seafood salad from a plastic foam tray balanced in her lap. The Brunswick native with family roots in the African America communities of rural Needwood and Brunswick’s Dixville returned home 20 years ago after a career as a social worker in New York City.

She recalled seeing Arbery jogging often through his old neighborhood, where she frequently visits a goddaughter.

“As long as Ahmaud’s family keeps coming I’m going to try to keep coming,” said Polite, 87. “I did know him, from seeing him running in the neighborhood. I’ve seen so many injustices in my life, I just had to come out and show my support for this cause.”

Some 600 prospective jurors were summoned Monday to report to the Selden Park gymnasium, a facility just down the road from the courthouse that was selected as the initial staging area of the jury process because its size accommodated social distancing logistics.

From those summoned, panels comprised of 20 prospective jurors each are scheduled to report to the courthouse throughout the week.

Another 400 are scheduled to be summoned next Monday to Selden Park to begin the process anew.